A couple years ago, right about this time of year, come to think of it, when the greens of summer were metamorphosing into the vibrant colors of autumn, I made the acquaintance of a very special mushroom.  I was so taken with this particular fungus, I wrote about him here in this blog.


When I first saw him, he was very shy and wouldn't even attempt to communicate. 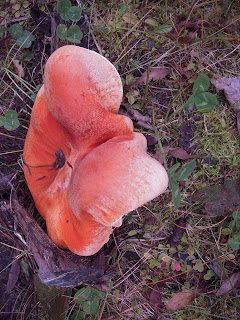 In fact, he blushed a bright pink and turned away.  I had to get right down to his level, right in his face so to speak, before he even acknowledged my presence. 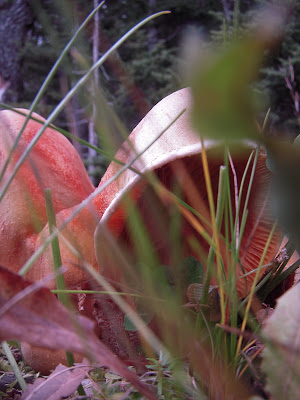 Slowly he began to open up and we talked for a long time.  He told me all about his dreams, and how he was encouraging the other mushrooms in his neighborhood to dream also. 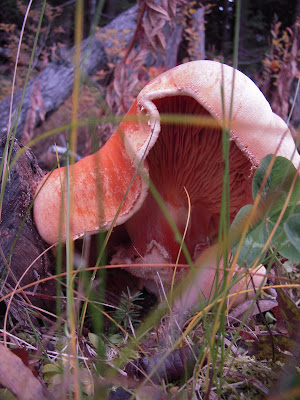 Most of them just laughed and made fun of Jonathan's dreams.  "You goofy mushroom," they said, "We all know mushrooms can't do THAT!"
Then winter came and Jonathan's world was covered in the deep snows that fall in the Chugach mountains.  Long into the winter, I wondered about Jonathan, wondered if any of his dreams ever came true.
Spring arrived and then summer, and I went searching for Jonathan, but couldn't find him or any of his relatives.  I waited until fall, and then every time I drove by his place, I'd stop the car and climb the bank to the edge of the hemlock forest.  I hoped to find either Jonathan or some evidence that would give me a clue about him.  There was nothing, not a mushroom in sight.  There was not one thing that told me a mushroom ever lived --and dreamed--at that spot.
Today, driving past in a steady rain, I caught a glimpse of color and pulled off the highway.  At first all I saw were stodgy mushrooms, the kind you see everywhere. 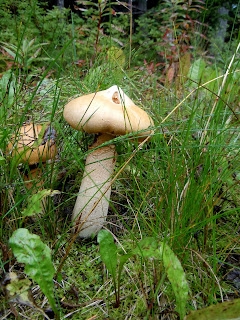 A few feet from where Jonathan had lived and dreamed, I found some huge mushrooms, but none than looked like Jonathan or his kin. 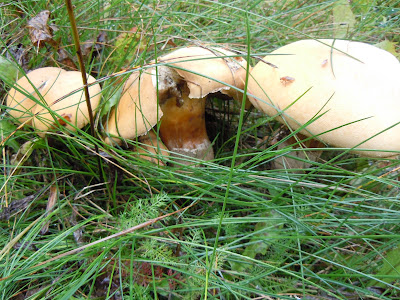 I grew very concerned.  Did the laughter finally get to Jonathan?  Did he put away his dreams and grow into normal, stodgy old mushroom?   I found some evidence to suggest that: 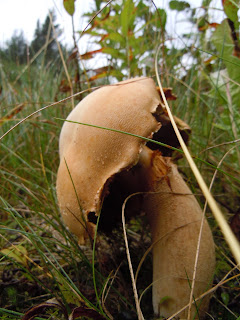 Once, this mushroom could have dreamed for a life beyond being rooted to the same spot its entire span.  Now, grown old and nearing the end of its life span, it is bent with age and care.


I searched and searched for Jonathan.  I never found him.  But, I did find an indication that Jonathan's whimsy might have influenced another mushroom, because, there in the midst of The Stodgies, this particular mushroom defied convention and tilted back its cap to allow a gentle rain to fall on its face. 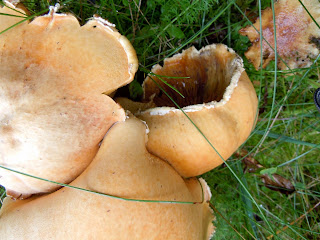 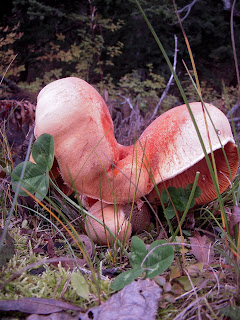