Pablo and his coat of many colors

I've been trying for almost two weeks to get a good in focus photo of the new tail feather Pablo is growing.  Parrots, in case you don't know, molt and grow feathers regularly. 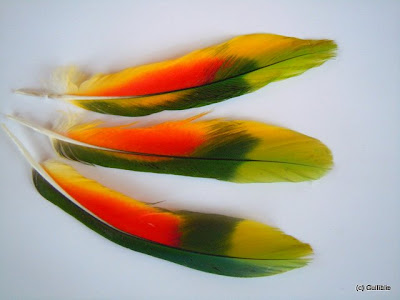 This (above) is a previous photo of tail fathers Pablo molted.  They are green, yellow, and red.  I know that bottom feather looks a little off, but it's green.

Taking a picture of a parrot's tail is tricky when those feathers are still attached to the parrot..  Not only is it against their nature to allow you to sneak up behind them, this particular parrot gets annoyed when a camera is pointed in his direction, as evidenced by this shot where he is attempting to hide behind his cage-top perch because a lens is aimed at him. 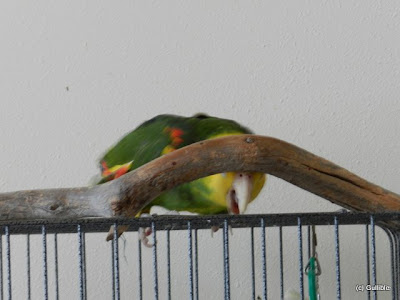 Anyway, a couple weeks ago I caught a glimpse of what I thought was aqua in a tail feather.  He wouldn't let me verify that.  A couple days later, I saw it again and grabbed a camera.

This is my first attempt.  I am holding him and the feather with one hand while the other hand attempts to focus the camera on the feather. 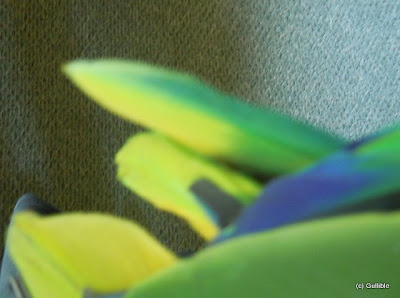 My second attempt wasn't much better but it was enough to see that the outside of the feather was not green, but aqua. 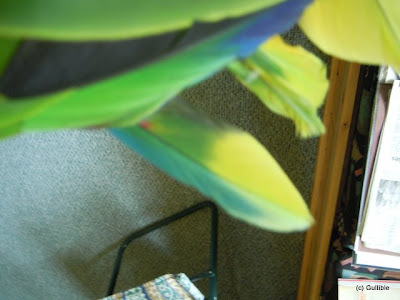 I set him down on the kitchen counter and tried again.  It is not a spot I allow him on, so he paused briefly in confusion before heading to a chair back and I was able to get this shot. 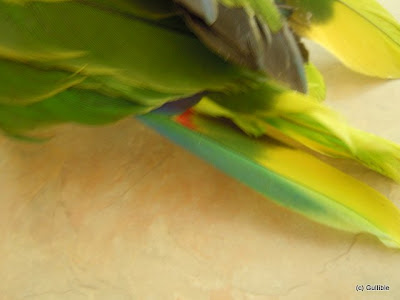 Sweetie Pie was growing a turquoise feather.  Just for me.

Then this evening, I realized that I knew exactly how to get an in focus photo of that wonderful feather.  It is our custom in the evening for Pablo to sit on my out-stretched legs while I watch TV.  It is our quality time.  He allows (demands) me to scratch his head and preen him by picking off the covering in which new head and back feathers grow.  Then he preens me by carefully slicing off any scabs or irregularities on my skin that he thinks should be gone.

Sometimes, he naps.  And that is when the camera got this photo: 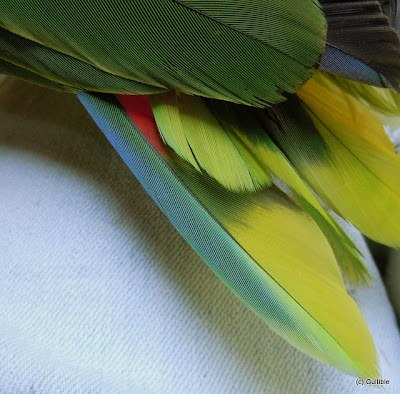 The hue is not quite right against by light blue jeans, but it's in focus.  Now that I've learned the secret, I'll try some more.

So while I was admiring this in-focus picture, a horrible thought crept into my mind.  Pablo is forty years old this year and has been growing feathers more and more colorful every year.  His head, all green when he was young, is now yellow clear down his neck.

His shoulders are red and there are more colors in his wing feathers than ever before.


Now, where there used to be hints of turquoise, there is a feather with this color that is lighter than green.

"Lighter than green."  Could it be?  Is it possible?

Does Pablo's ink cartridge need to be changed?  And just--exactly--how does one do that? 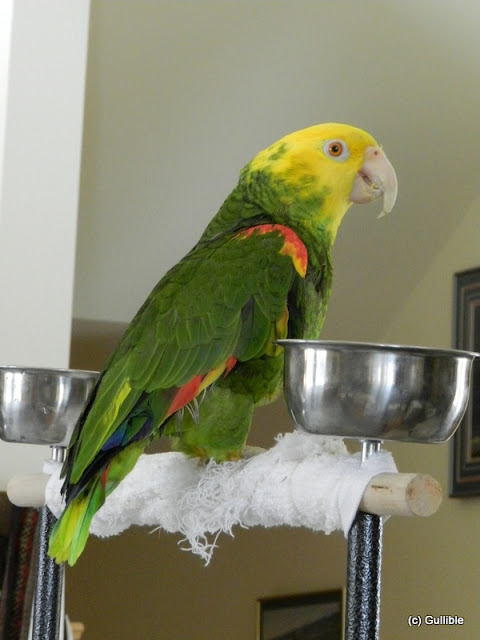