You know that old ruse about salting the mine?  Someone wants to sell something, so they scatter "gold" in the mine to make it look like something worth buying?

A year ago, while I was picking up litter, I noticed something strange about fifty feet down a steep embankment.  I climbed down to see what it was and it turned out to be the carcass of a wolf., not yet totally cleaned by nature.

This summer, while I was in the same area, I saw a bunch of white things scattered along the top of that same embankment.  They turned out to be parts and pieces of the wolf''s skull, not white and free of any tissue.

For some reason, I picked them up, looked around for the teeth that were missing from the upper jaw and one lower jaw.  I thought I had found most of them. 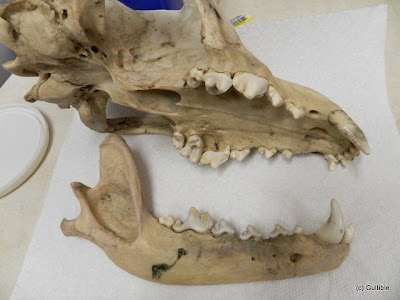 Then, because I had no idea what to do with my found treasure, I put them in a bucket with bleach water and there they sat for a couple months.  Finally, one day I needed that particular bucket, so I drained the water off and laid out the skull, jawbone, and teeth to dry on paper towels.

I inserted all the teeth in their proper places, but I had one left over.  I knew a tooth like this didn't belong in this skull, yet I'd collected it where I found the skull.  It looked much older than the wolf teeth. 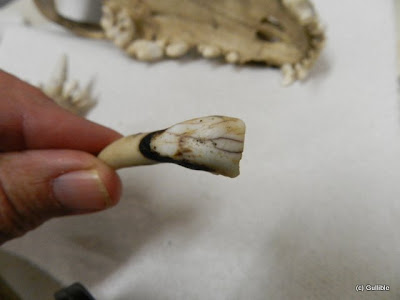 The mystery continues.  The tooth resembles a horse's tooth.   I e-mailed a photo to my wildlife biologist nephew and asked him if he's salted my bucket.  He denied it. 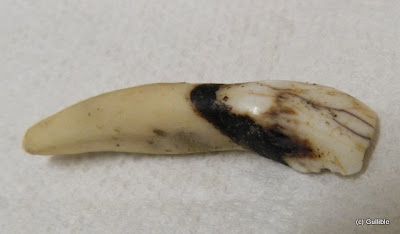 Okay, on to better things.

Driving home from Anchorage Wednesday, I spotted a pod of belugas whales in Turnagain Arm. 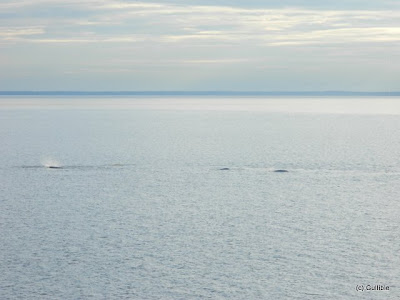 Yes, those bumps in the water are belugas.  Not a very good photo but the sun was setting right in line with the whales and I couldn't see them on the LCD screen on the camera.   I was guessing.


And closer to home, a full moon was rising over Tern Lake.  This photo was taken at 9 PM, and it was still daylight. 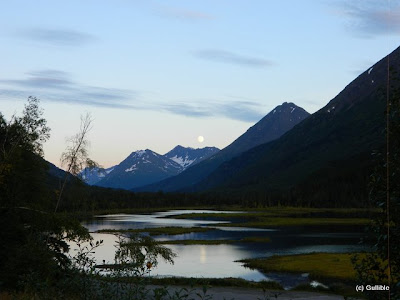