This is how I spent Memorial Day.

This is an alder, before it leafs out. 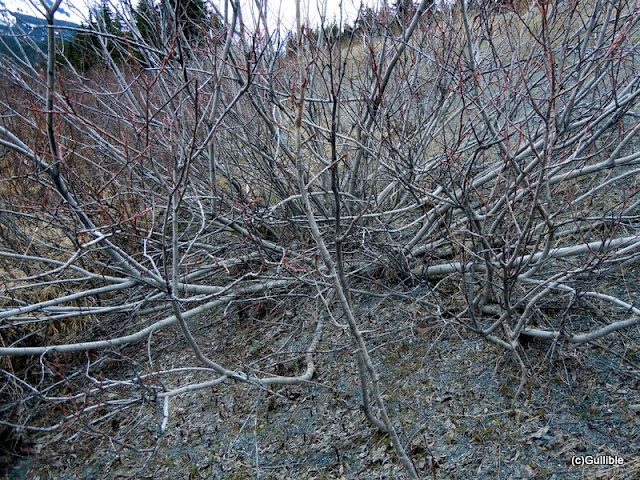 I took a photo of it because it's growing all by itself.   Usually such is not the case and alders grow in large patches, their limbs intertwining in an almost impenetrable mass.  Note there is no single trunk, but myriad limbs that grow outward and then upward.

When they grow on steep slopes, it is sometimes easier to fight your way into the center and then look for the path of least resistance, hoping your arms don't get scratched up any more than they already are.

Below is how I spent Memorial Day.   It was the hottest day of the year so far.  My thermometer at home reached 82 degrees!  The evening before was rainy, and I actually built a fire in the wood stove to take off the chill for the night. 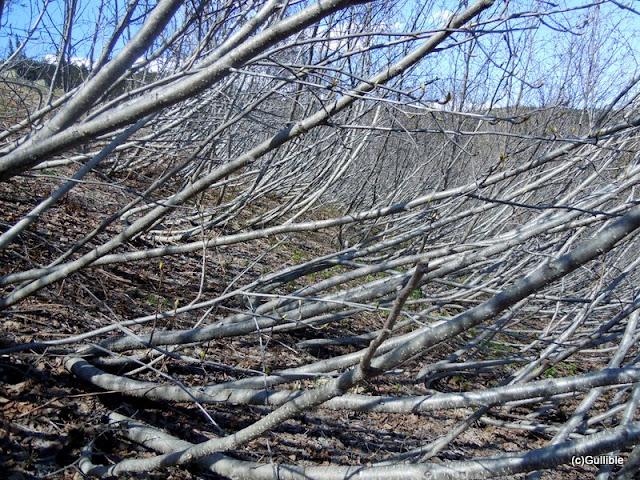 I've tried a couple times to take a photo that accurately conveys the steepness of this slope, but every time I think it doesn't come up to muster.   Or, perhaps when I'm bashing my way through these miserable limbs in search of beer bottles and dirty diapers and McFast Food wrappers, it simply seems more of an incline.  The upper part of the slope IS steeper, as you can see in the upper left of the photo where you can just make out two guard rail posts.

This particular area, at Mile 50.5 of the Seward Highway, is one of the worst for litter.   People seem to think if it's hidden in the brush, it isn't litter, so very little is left at the top where it's easier to clean up.

I'd cleaned half of this about a week ago, and yesterday went back to get the rest.   In between, someone had dumped a tote full of packaged frozen meat.   That tote landed at least 30 feet into the brush.  The meat thawed and was well on its way to putrefaction.  It smelled awful.

I lugged all of it to the top in one trip, and it was heavy.   But the worst part was keeping an eye out for bears because they would be attracted by the stench.  Fortunately, the alders haven't leafed out and visibility is good.   For  that reason alone, I don't go into the brush after they leaf out and visibility is reduced.

A little farther along, in the area I hadn't cleaned up, was a hard shell plastic tonneau cover, apparently blown off the bed of a pickup.   What fun I had dragging it uphill, through alders, in the heat,  the shattered edges catching on every alder and blade of dead grass.   NOT!

Nothing eats alders.   Moose prefer birch and willow.  The only thing alder is good for is smoking salmon.

And that's how I spent Memorial Day.