Into the Insanity of the Kenai River

We headed into the insanity of the third weekend in July, driving south towards the Kenai River, and knowing full well that wiser folks would stay at home.  A mile from home, on a hot and sunny Sunday afternoon, we found bedlam.

Tern Lake, the junction of the Seward and Sterling highways, where those lucky enough to be on the Seward Highway have the right of way.  Those on the Sterling must come to a full stop before turning onto the Seward and driviing north to Anchorage and beyond.   Look left, right, then left again if they didn't want to get center-punched by a vehicle that appeared, seemingly out of nowhere, coming downhill around the toe of a mountain.  It's always best to look left again. 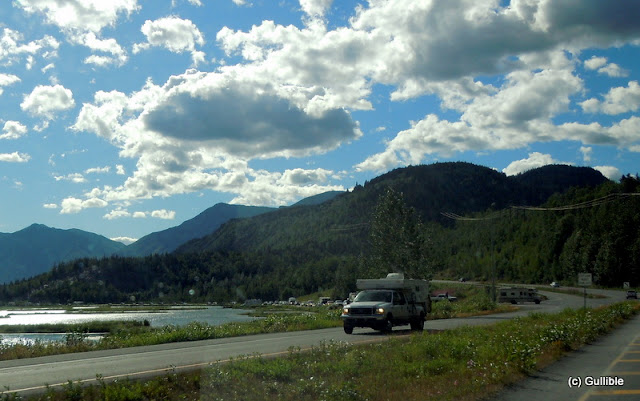 Jammed up at the junction was a line of vehicles stretching as far west as I could see around the lake.    See the motorhome crosswise in the picture behind the truck/camper in the foreground?  That motorhome is going to turn left and head uphill in one of the two lanes of traffic going north towards  Anchorage.

I was going to turn left turn going into the picture, and that motrhome just might be waiting for me.  I felt badly for the folks waiting in the line that wound around the lake, but I was sure glad I wasn't in that line. 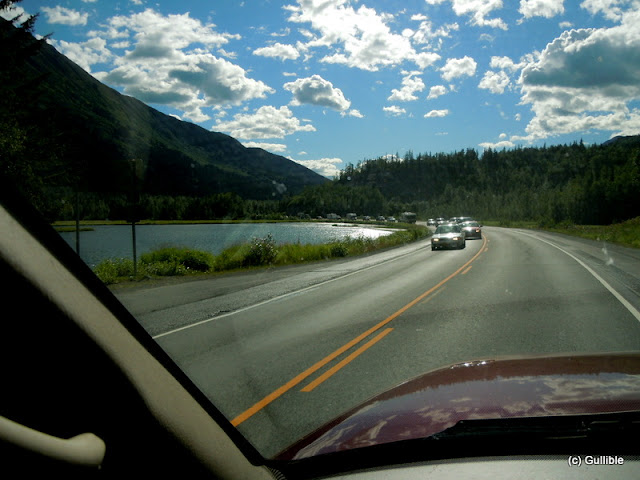 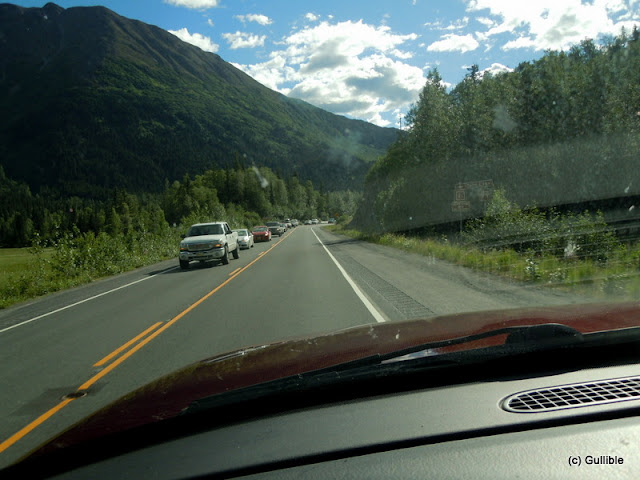 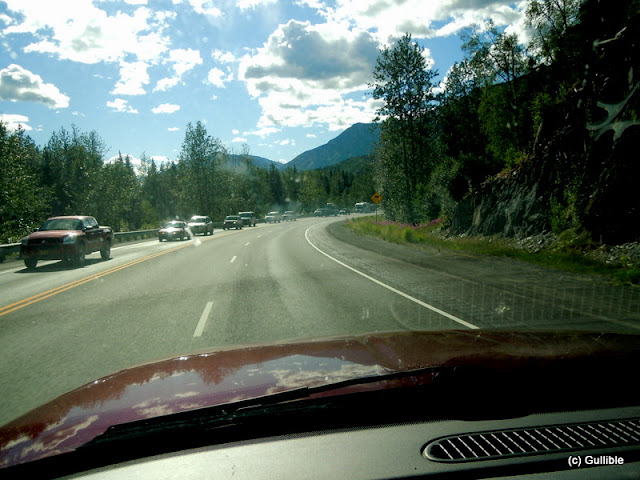 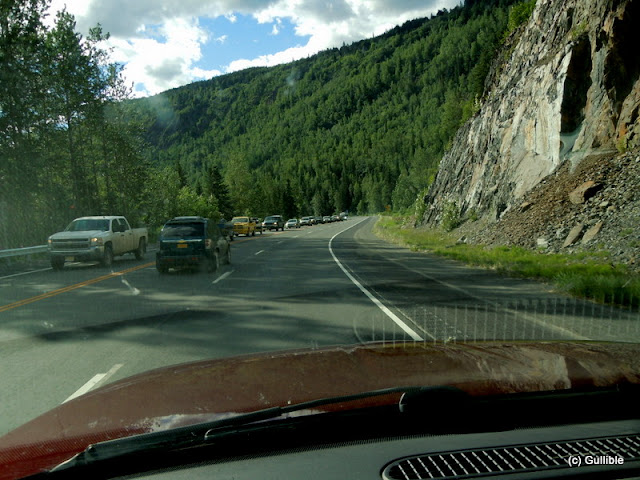 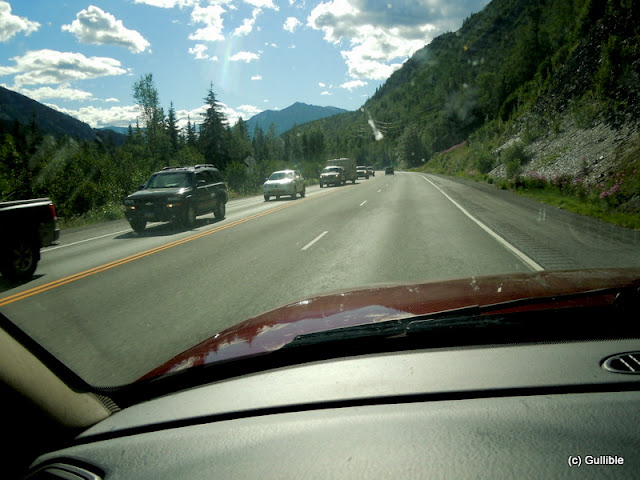 A mile later there was enough of a gap that I could tell the next string of vehicles were newcomers to the Tern Lake junction traffic jam. 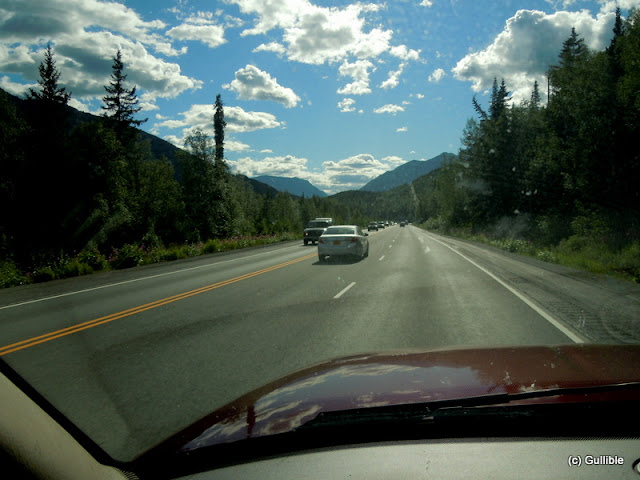 Sorry about all the boring photos of cars and trucks and RVs, but a string of stalled traffic a mile long is pretty darned unusual in this part of Alaska.

What's with all the traffic?  And why the third weekend of July?   Simple: Salmon.

Salmon in the Kenai River, more than a million salmon in the river within a few days, daily bag limits raised from three fish to six fish, bright silver sockeye salmon.   The second run of salmon, the largest run of the year, was heading  into the river.

With rod  and reel or a long-handled net with a gaping four or five foot diameter maw, go get your salmon.   Ninety thousand orange-fleshed sockeyes passed the upriver sonar counters in ONE DAY.  And, what seemed like ninety thousand fish-hungry people went after them.

With Pablo riding shotgun on top of his little travel cage, we braved the going-home onslaught of vehicles for more than forty miles, until we reached our turnoff. 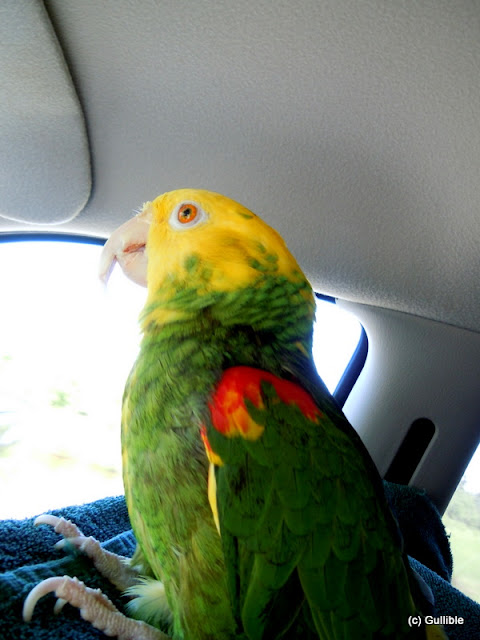 Immediately, and I do mean immediately,  behind me was my little 19 foot travel trailer, Pablo's favorite home-away-from home. 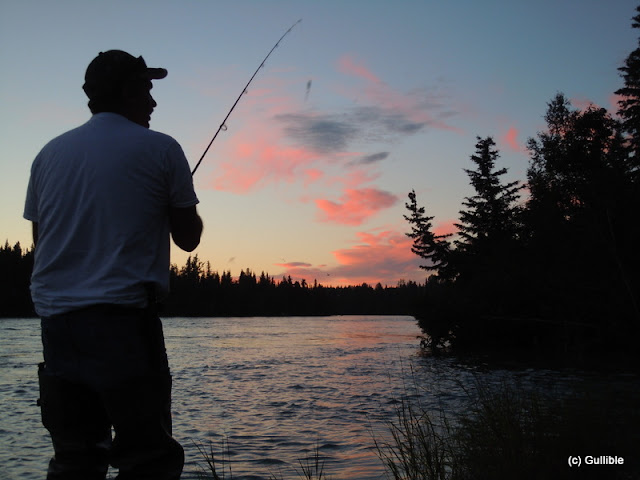 Wade out into the mouth of the river on the incoming tide, wade out farther than the guy in front of you and hope your waders don't leak.   Stick that long-handled net out as far as you can and wait.  Wait for a salmon to run right into your net, for Pete's sakes. That's called dipnetting.   It's a form of subsistence fishing for residents, and I'll admit right now I don't know what the bag limit is because I am never going to get into that madness positively never ever again in my life, amen. 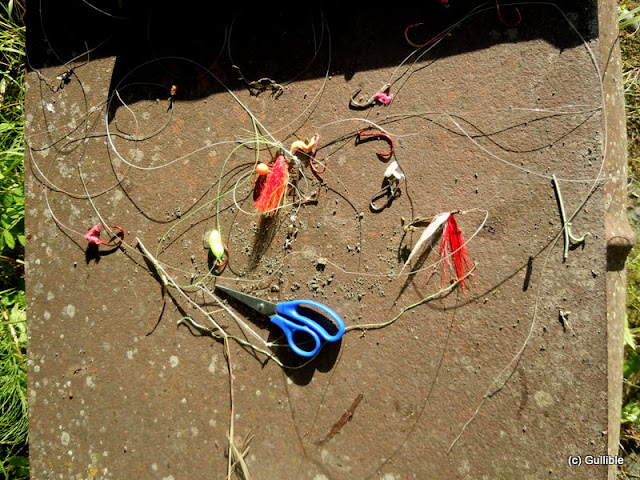 Don't forget the most important part: 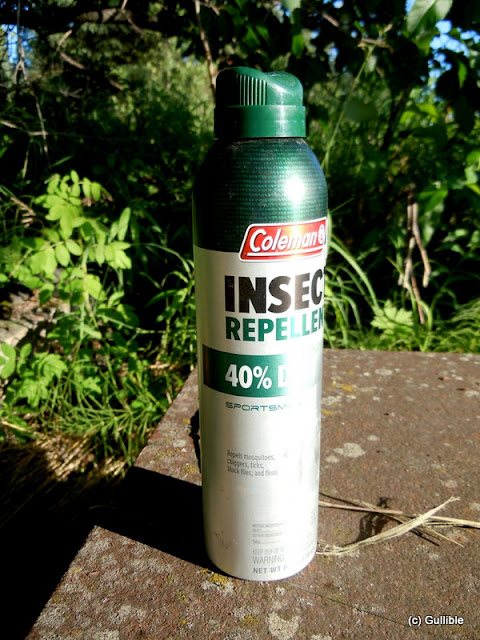 Or, go down and flog the river with a hook on your rod and reel all day if you want, but those in the know wait until late evening, after the hordes have headed for their motel rooms, RVs, or tents (or gone home and gotten into a traffic jam at Tern Lake).   By then the fish have pooled in bankside eddies, resting for the next leg of their journey, and the pressure of shore-bound idiots casting those crazy-colored artificial flies and bouncing sinkers of their heads has ceased.  Almost. 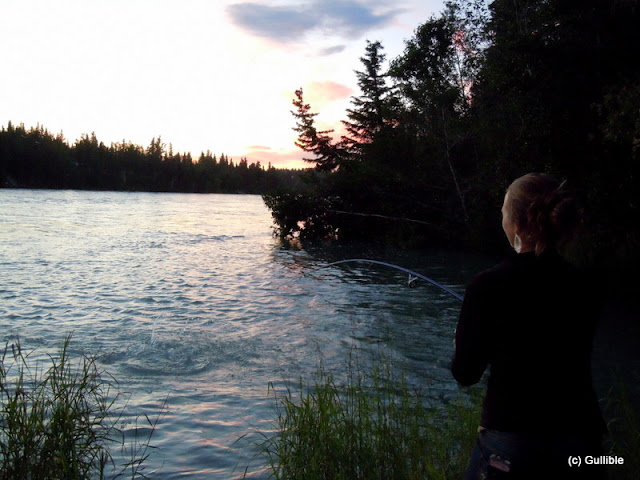 That's where you catch them--right where the quiet pool water meets the river current, right when the fish don't suspect anything.    Right when most people should be in bed, but then this is Alaska and it's still light at midnight. 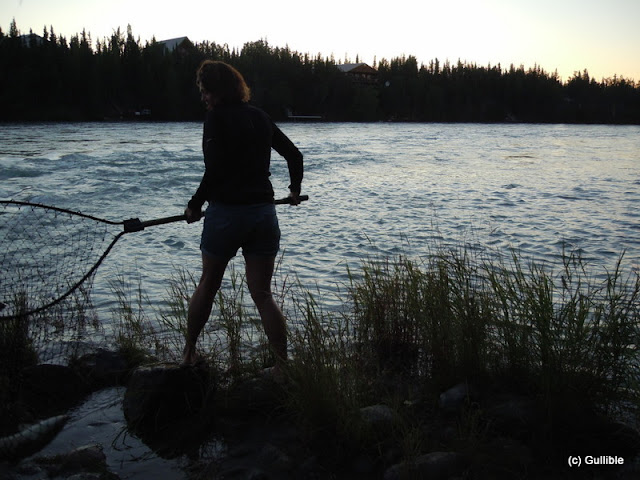 Then you sit around the campfire with your friends and stare at the growth rings on a log burning in the firepit. 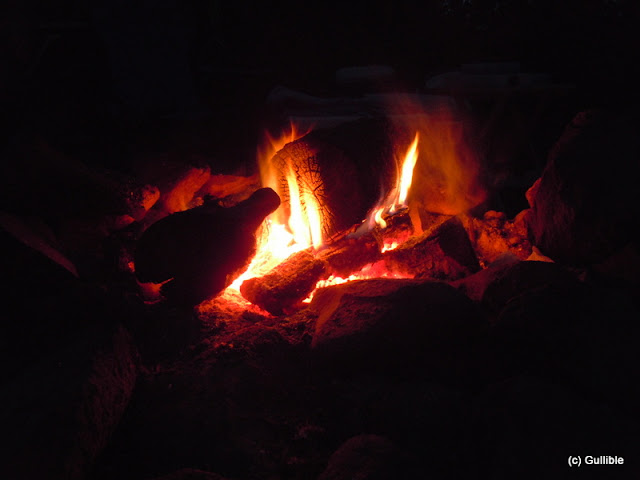 Walk back to the river when the full moon comes up and try to hold still because you neglected to bring a tripod. 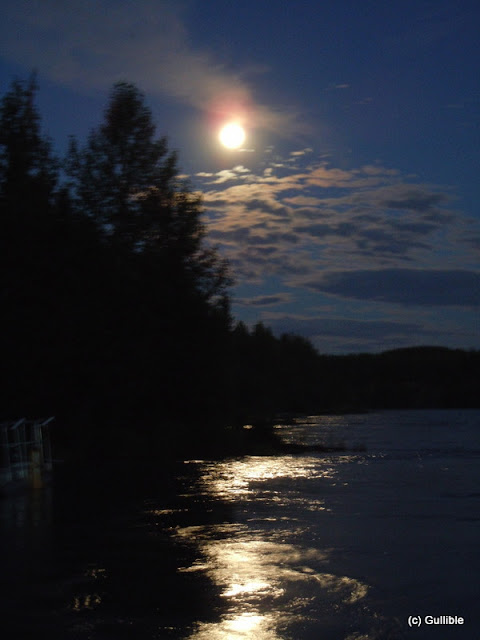 The next day, it starts all over.   Even Pablo likes to watch the fishing because he knows what this is all about. 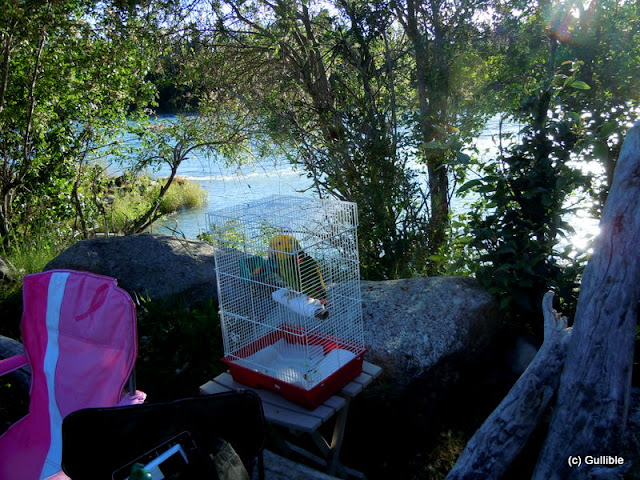 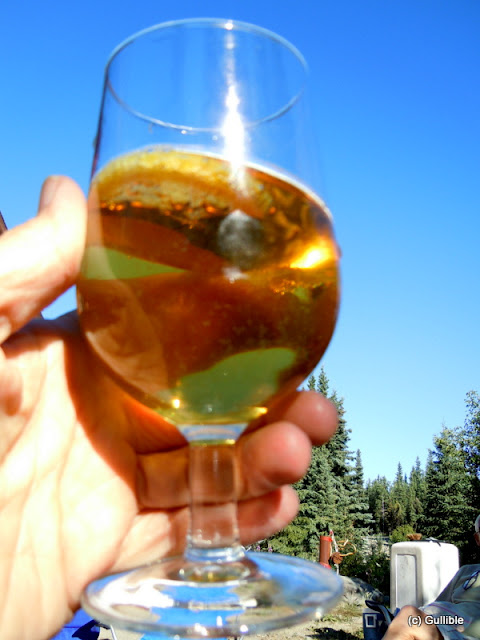 He skips the Corona, thanks anyway, but eats the slice of lime.    And waits for the best part: 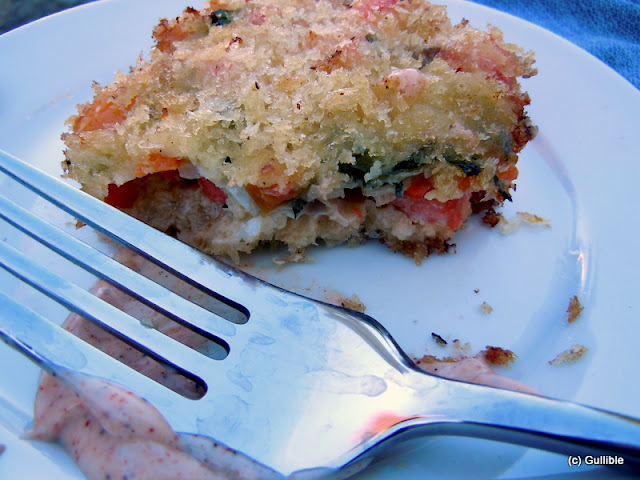 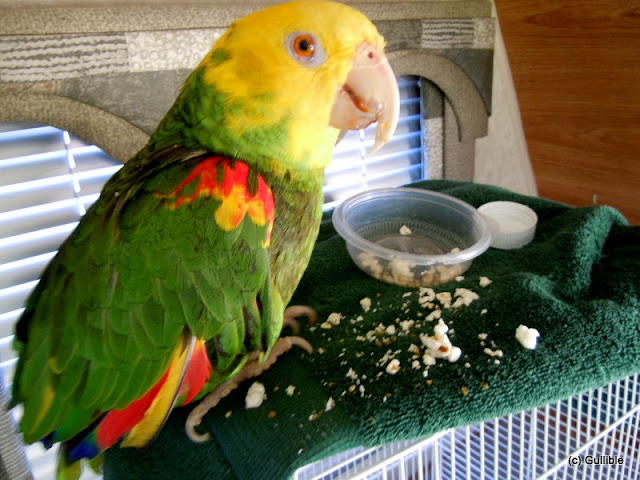 Much tastier than the popcorn he scattered all over in the travel trailer. 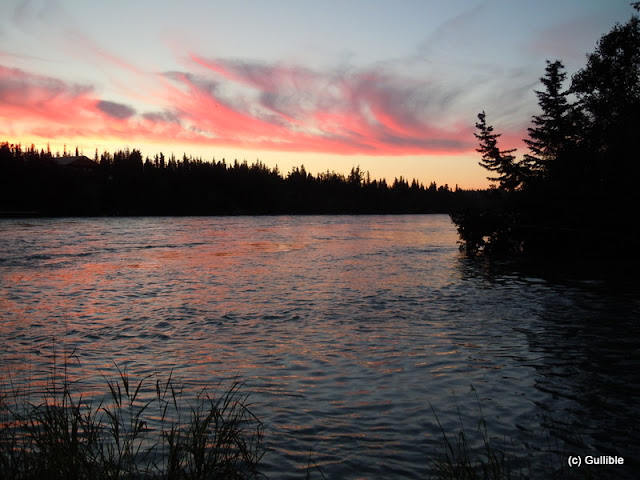 And it ends with another beautiful sunset.
Posted by Gullible at 12:51 AM