Lost and Found at Ann's Prompts

I was looking for something last night at Ann Linquist Writes site and came across a long-forgotten story I'd written in 2009.   I had completely forgotten about it. 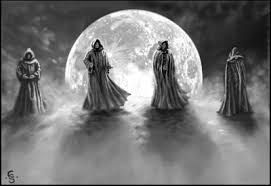 
Seamus reached back over his shoulders and drew the hood of his brown woolen cloak over his long black hair. Slipping his feet into sandals, he opened the heavy wooden door of his cell, kissed his right forefinger and middle finger, placed the fingers on the Irish cross over the doorway, then stepped into the dorter.

As he passed the rows of empty cots, he noted the absence of other monks. They must all be in the refectory, he thought, and added a prayer that none were yet in the misericord.

The wooden soles of his sandals clapped on the cobblestones floor as he left the dorter and entered the windowed cloister. I should wear the horsehair-soled ones, he thought, but they hurt so much on these stones. Well, the Abbott can’t hear them anyway.

At the end of the long hallway, he turned left into the lavatorium. Seamus rolled back the sleeves of his cloak, dipped his hands into the trough of running water, and began scrubbing them with the coarse brown lye soap made at the monastery. Only Patrick was in the small room, drying his hands on burlap.

“Brother Patrick," said Seamus. “I pray God be with you tonight.”

“Thank you,” said Patrick. “And with you, Brother Seamus. How is the Abbott this day?”

“Weakening, I am sorry to say. I am about to take him his evening meal. What have the brothers prepared for us?”

“Boiled potatoes and cabbage, along with fresh haddock.”

“Sounds wonderful, as usual. The Abbott can eat the fish and potatoes if I mash them for him. I’m afraid the cabbage is too much for him to chew, though. Perhaps some of the broth will do him well,” answered Seamus. “And the other?”

"We Omagh Monks are ahead of the Dublin Druids three games to two” said Patrick. “That new novice Brendan is gifted at nine pins. He alone can take credit for winning two of the games. Have you finished your new bowling ball yet?”

“I have. The Lord willing I will make those Druids laugh yet.”

“There are a cheery lot, are they not,” laughed Patrick. “Begorrah, I have yet to see one even smile. I don’t know how they win anything, with all their doom and gloom prognostications directed at their fellow teammates. Do you really think they will keep their promise to laugh if we win the contest?”

“Yes, well, let’s not get ahead of ourselves here and become prideful. We are blessed that we have been able to meet two nights in a row. And their Lorcan and Eoghan are determined bowlers, are they not?”

“Do you anticipate difficulties tonight? The brothers have completed all their prayers and chores and are anticipating the evening contest.”

“No more than usual. Two days prior I 'accidentally' nudged his hearing horn under his bed so he cannot hear the balls rolling across the stone and hitting the oaken pins. To be playing a secular game when there are crops to be harvested surely is a sin, but what fears me most is if he discovers we have refashioned the dungeon misericord into a bowling hall,” said Seamus. Patrick raised his eyes to the ceiling and made the sign of the cross.

The two entered the refectory where two dozen monks were eating in silence, not by the promise of their vows, but in anxious anticipation of what might befall them this night.

Questioning eyes turned to Seamus as he entered the hall, though all the monks knew it was too soon for an answer. Seamus said nothing and indicated nothing. He went to the serving trencher and spooned a small portion of potatoes and fish onto a wooden plate, then mashed the two together. In a simple goblet he ladled some cabbage broth, and placed the two serving dishes on a wooden slab.

A few minutes later, Seamus pushed open the door to the Abbott’s room, clearing his throat loudly as he did. There was no response from the man seated at the window. Seamus paused and watched for signs of movement. Seeing the Abbott take in a breath, Seamus again cleared his throat and spoke, “Good evening, Abbott Benedict. I have brought you a fine meal.”

Slowly the Abbott turned towards Seamus. “Oh, I didn’t hear you, Brother Seamus. I still cannot find my hearing aid anywhere. Have you seen it perchance?”

Seamus looked down at the tray in his hands, then chanced a sidelong glance at the Abbott’s bed. He could just make out the dim off-white shape of a hollow goat’s horn on the floor, almost totally hidden by the wool blankets that draped to the stone floor.

“Abbott, I’m sure you have simply misplaced the horn. We will find it some day.”

Abbott Benedict raised his rheumy blue eyes to Seamus’s and said nothing. He picked up the wooden spoon and began eating. Seamus began speaking of the work accomplished so far with the monastery’s crops and of the work yet to come. The Abbott nodded occasionally, but remained mute. When the Abbott finished his meal, Seamus placed the plate and goblet on the slab.

“Would you like some assistance in getting to bed, my father?” said Seamus.

“Yes, please, Brother Seamus. That would be kind of you. My legs don’t seem to have the strength I think they should have. Ah, I think the good Lord will be calling for me soon.”

“That would be his proud gain and our misfortune,” replied Seamus as he helped the man rise and then offered his arm. The Abbott sat on the edge of the bed and Seamus lifted the old man’s legs onto the straw mattress, then drew the woolen blankets over the Abbott’s thin frame.

“Would there be anything else?” asked Seamus.

“No, no, you’ve done enough, Brother Seamus. You can put out the candles before you leave. I will say my prayers in the dark tonight. The Lord doesn’t need light to hear my words.”

“ I wish you a good night then, my Abbott,” said Seamus, pinching the wicks of two beeswax candles between his thumb and forefinger. He walked across the Abbott’s cell and reached for the iron latch.

“One thing, Seamus, before you leave.”

“What is the score? You aren’t letting those dratted Druids beat us, are you?”