The Herons of Halibut Cove

I pulled over to the shoulder on the long downhill slope to the “End of the Road,”  as the City of Homer bills itself.  There are many “ends of the road” communities in Alaska, primarily because of its paucity of roads and also because all but one side of this huge state, the one that abuts Canada,  end at salt water.

This end of the road was Homer, the farthest you can drive on the Kenai Peninsula south of Anchorage.  My immediate destination was the Homer Spit, an almost five-mile long bar of gravel that juts into Kachemak Bay from the mainland, and then across the bay to Halibut Cove.
I drove through town and onto the Spit.   At the iconic Salty Dawg saloon, I turned left and backed onto a portion of the small boat harbor, where I unloaded my luggage and groceries.  Then I drove around to the other side of the Salty Dawg and parked my truck where it would remain for the next three and a half weeks.

With the help of Jay and others, all my gear was loaded onto the Stormbird, a retired military vessel that now plies the waters of Kachemak Bay and carries the denizens of Halibut Cove, the US mail, groceries, appliances, and freight for the small settlement across the bay.  I took a seat in the wheel house, avoiding the larger passenger cabin with its sight odor of diesel fuel.

An hour later, the Stormbird sailed through the tiny entrance to the C-shaped cove, past Clem Tillion’s lighthouse B&B, and tied up to the dock. 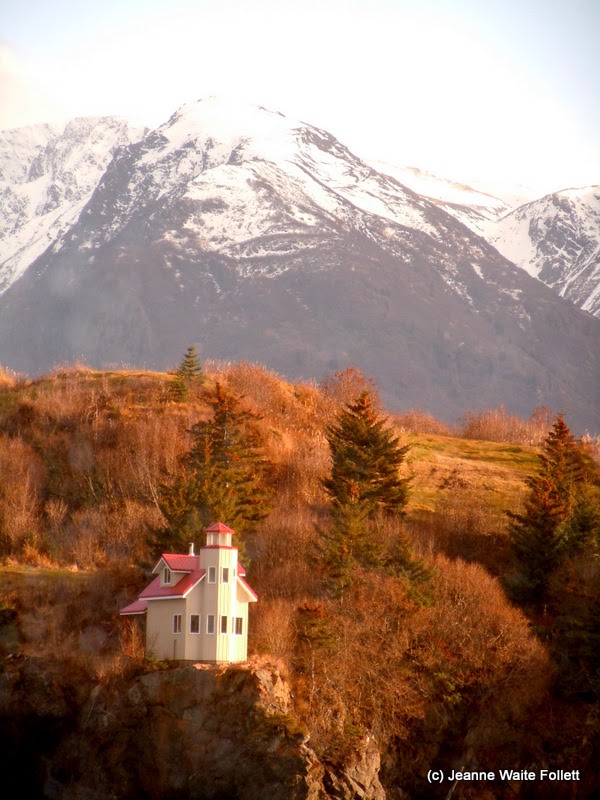 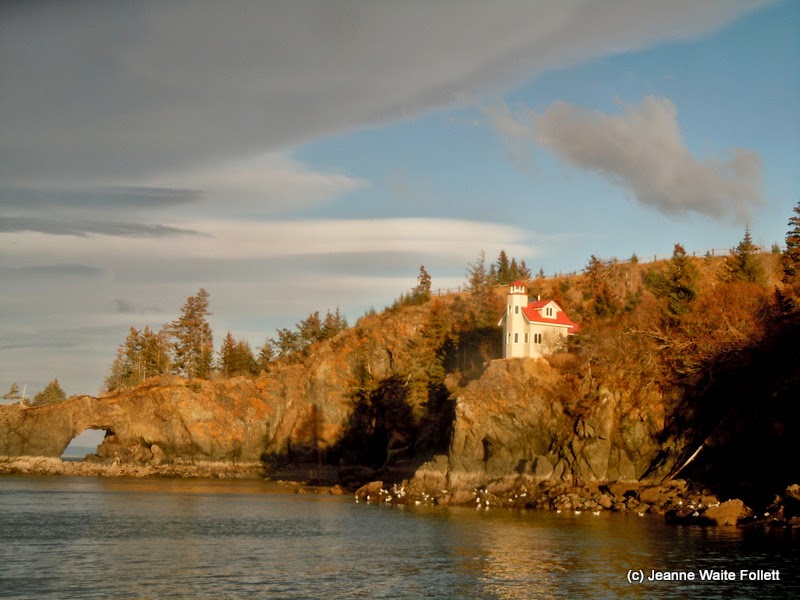 As soon as we passengers debarked, a raucous cawing across the water got my attention and when I turned I saw a large, crooked--necked bird fleeing for safer environs.  I had no idea what it could be and why it had chosen to winter in Alaska, unlike the hundreds of thousands of fowl that head south to warmer climes.

Jim pulled his skiff up to the same dock and we loaded all my stuff into it and motored across the cove to his dock.  I asked him what that bird could have been and his reply was “Herons.  They nest right there.”   He raised his hand and pointed into a grove of spruce trees.

Sure enough, a heron burst from the shrubbery and landed in a nearby tree.  A heron, for Pete’s sake.  I had no idea they wintered here.  In the eight years I’ve been coming to the cove to house-sit and open the door for Jim and Jan’s cat, I’ve neither seen nor heard the herons before that day.  A second heron remained hidd 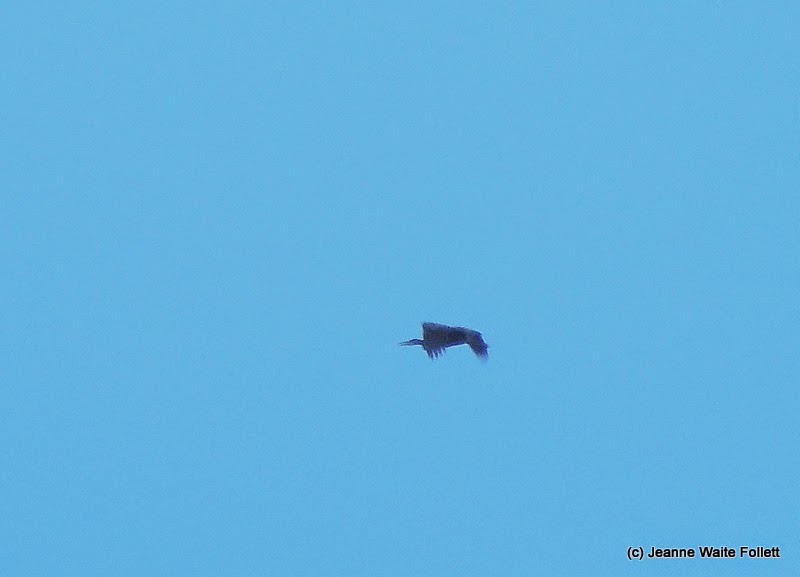 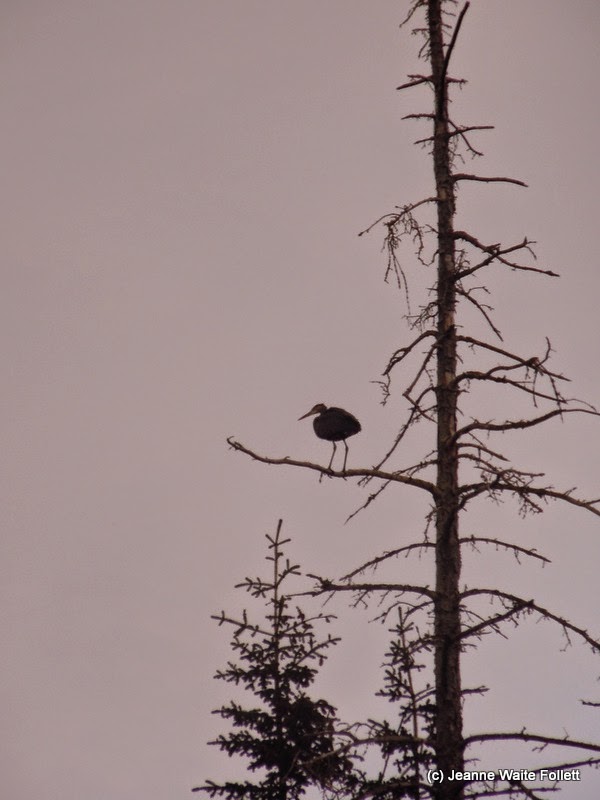 And that day was the last day I managed to get a decent photo of one of the herons, though it was silhouetted against the winter sky. 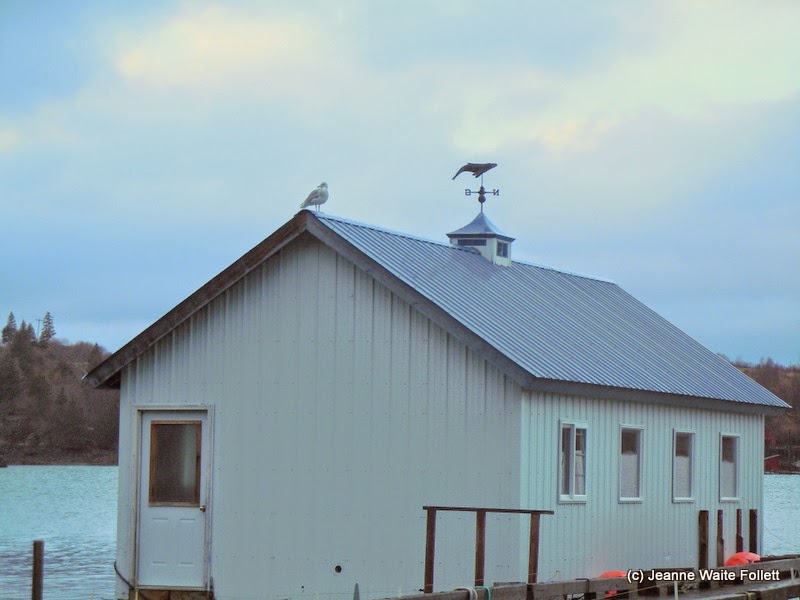 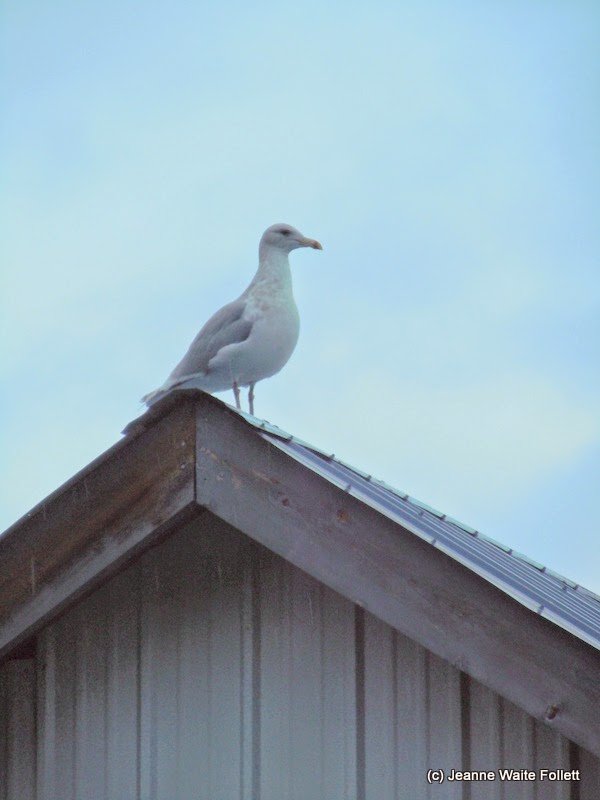 Every time since, when I walk down to the dock to check on the boat and skiff, I turn on my camera before the last curve on the approach to the dock.   And every time, the heron gets outta Dodge before I can get a photo.

Until today.  Today I managed to get somewhat of a photo.   Not a good one, though.

But one of these days those herons and I are going to have a meeting of the lens.