Something is happening here....

What it is ain't exactly clear....


Tern Lake is thawing rapidly and today I stopped to admire a pair of swans feeding close to shore. 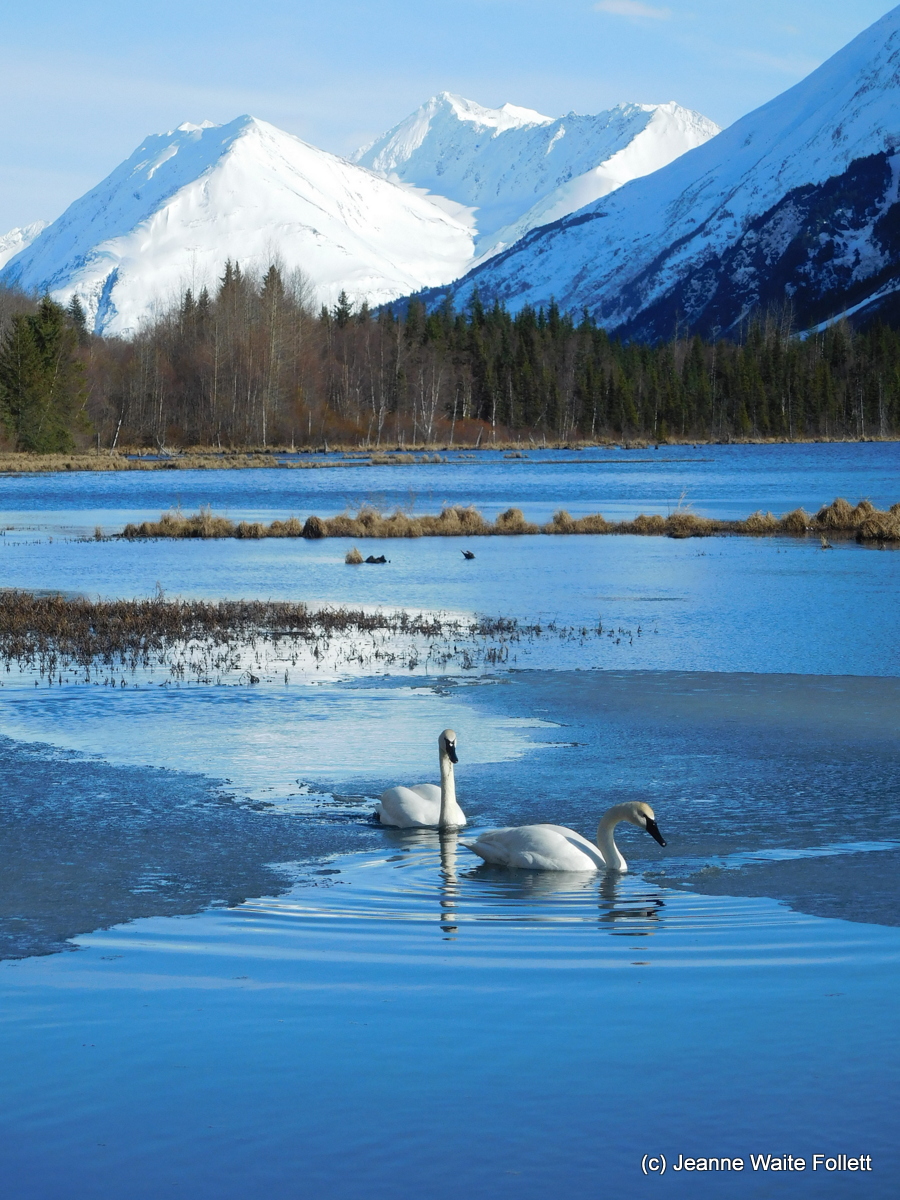 Trumpeter swans are usually quite shy and swim off if approached too closely.   Stay in your vehicle and they don't mind, but is you're on foot, the prefer to depart the area, especially in springtime.

I was on foot as I carefully approached.  I made sure they could see me and didn't walk straight toward them.    As I expected, they left the confines of the icy area and started swimming towards me, which would give them a large area of open water for escape. 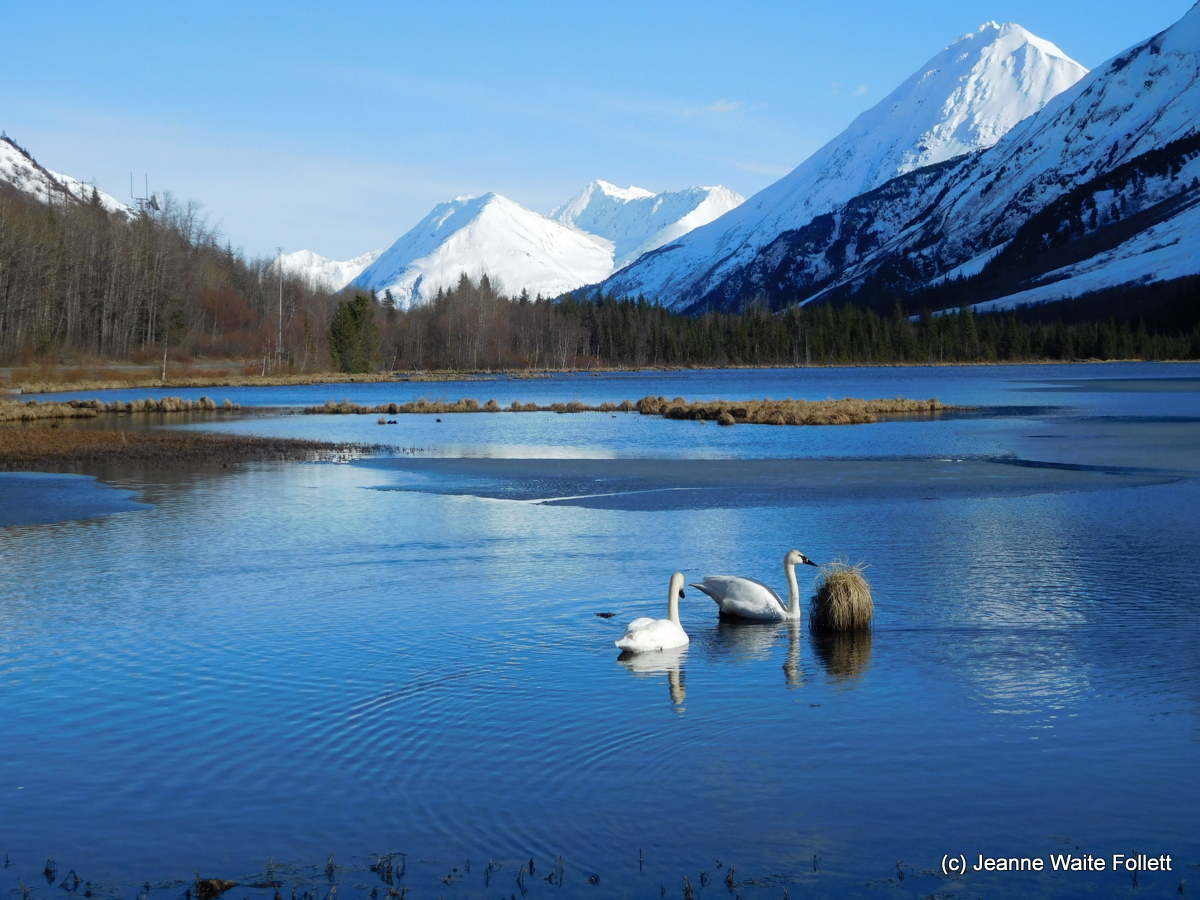 They continued towards me.   For a few moments. I thought they were going to charge and chase me off.   They were close enough that I could see how broad those white backs were and I imagined that getting my arms around the body with my hands touching each other would be all I could manage.

At a distance, the swans don't appear that big, but when two of then are swimming right at you, you get a good idea of just how large birds that weigh 24 lbs. and have with ten foot wingspans  are. 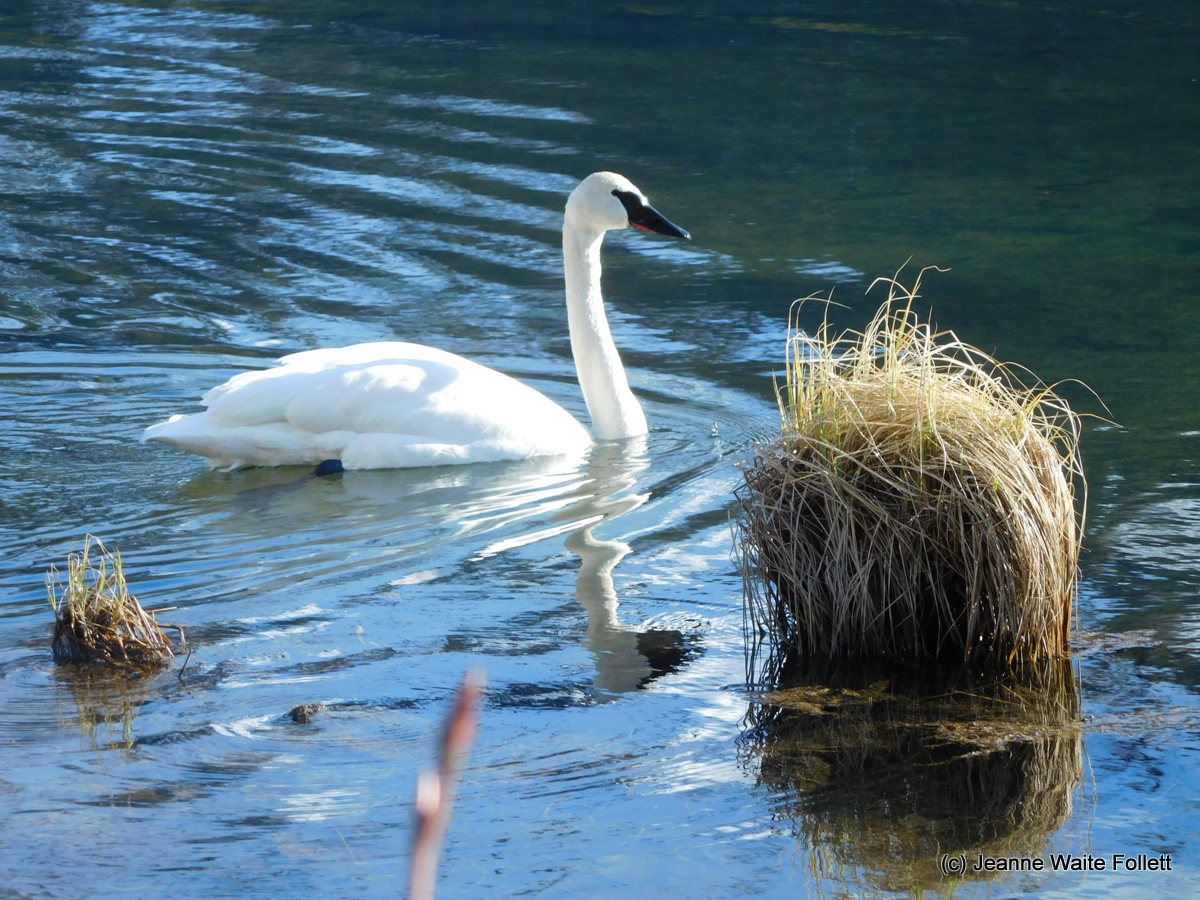 To my surprise,  the pair didn't swim off to my right into more open water, but stopped in front of me. 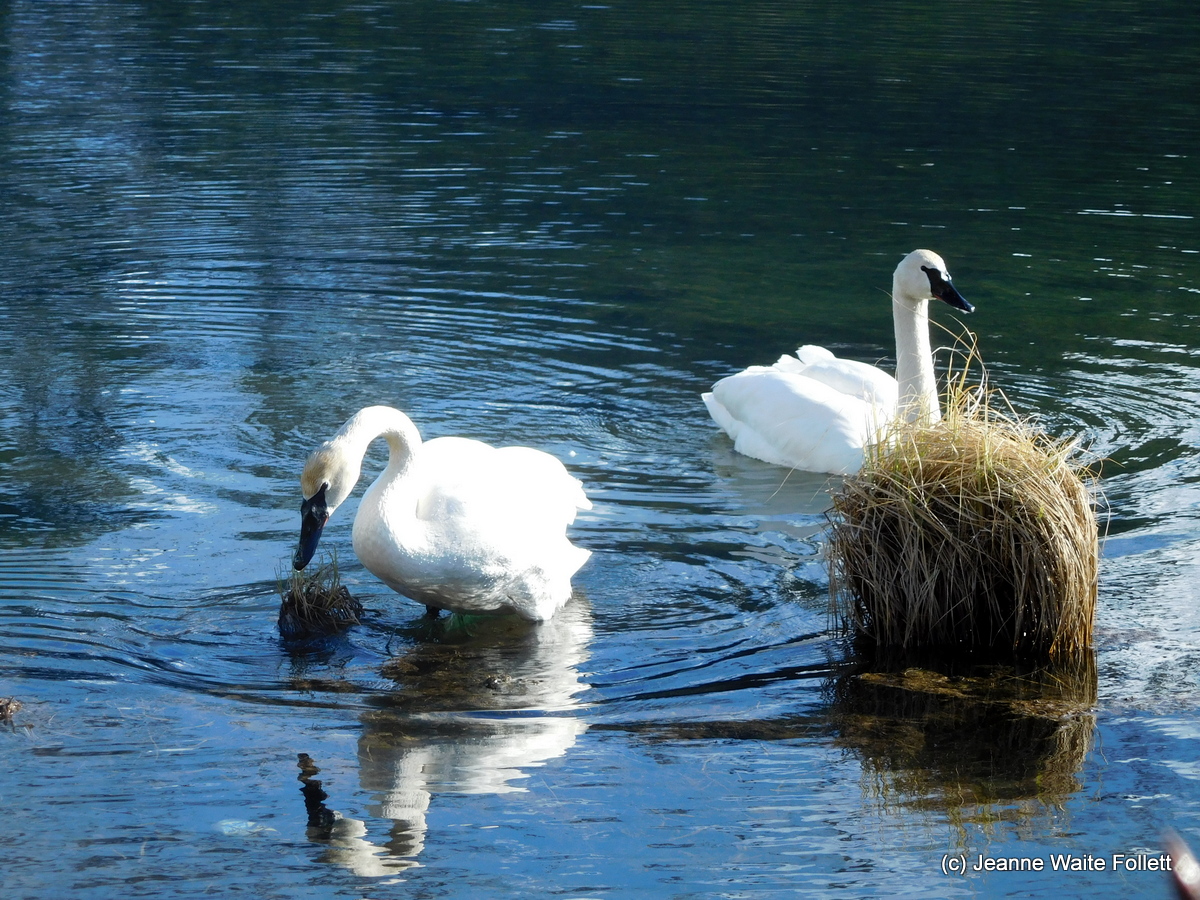 The huge male, called a cob, waded into a shallow spot next to a clump of grass and stood looking at me while the female, the pen, paddled about and groomed her feathers. 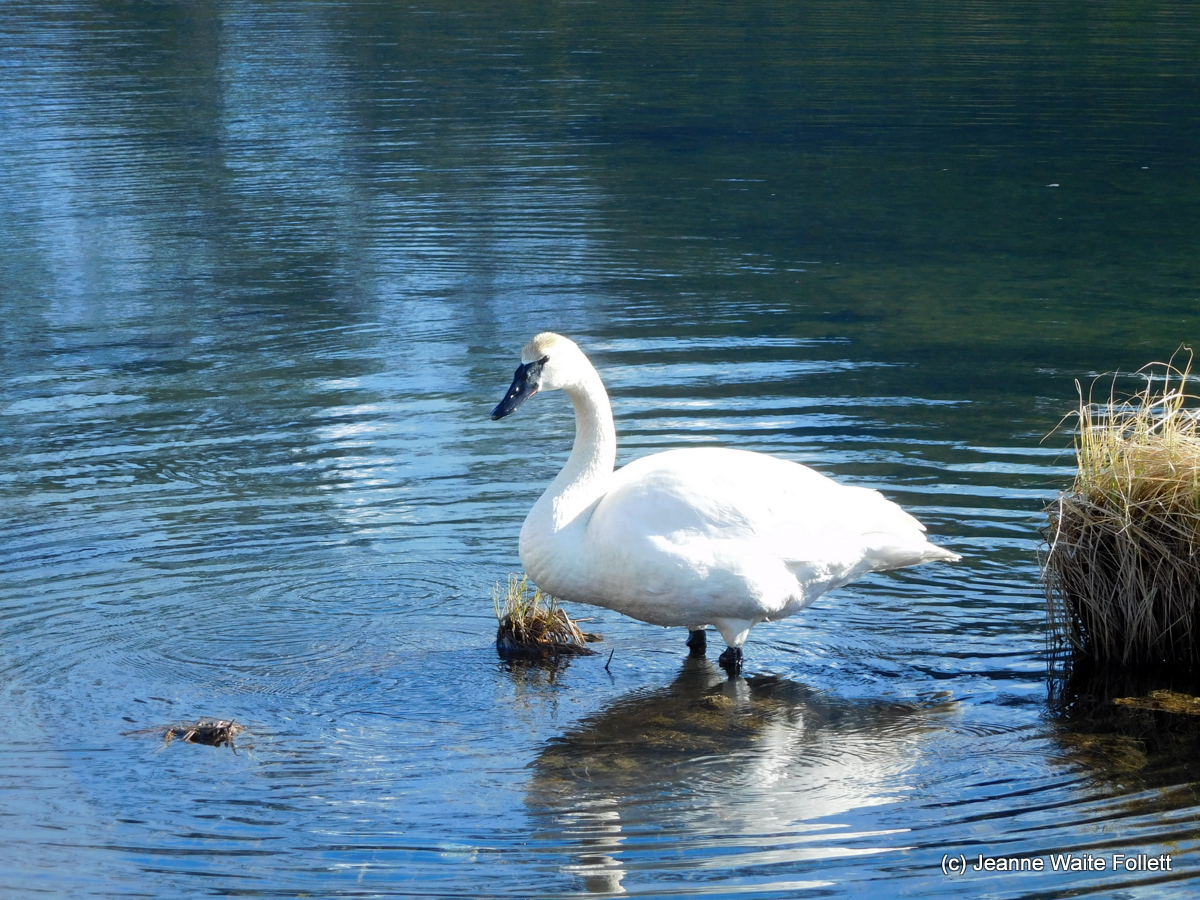 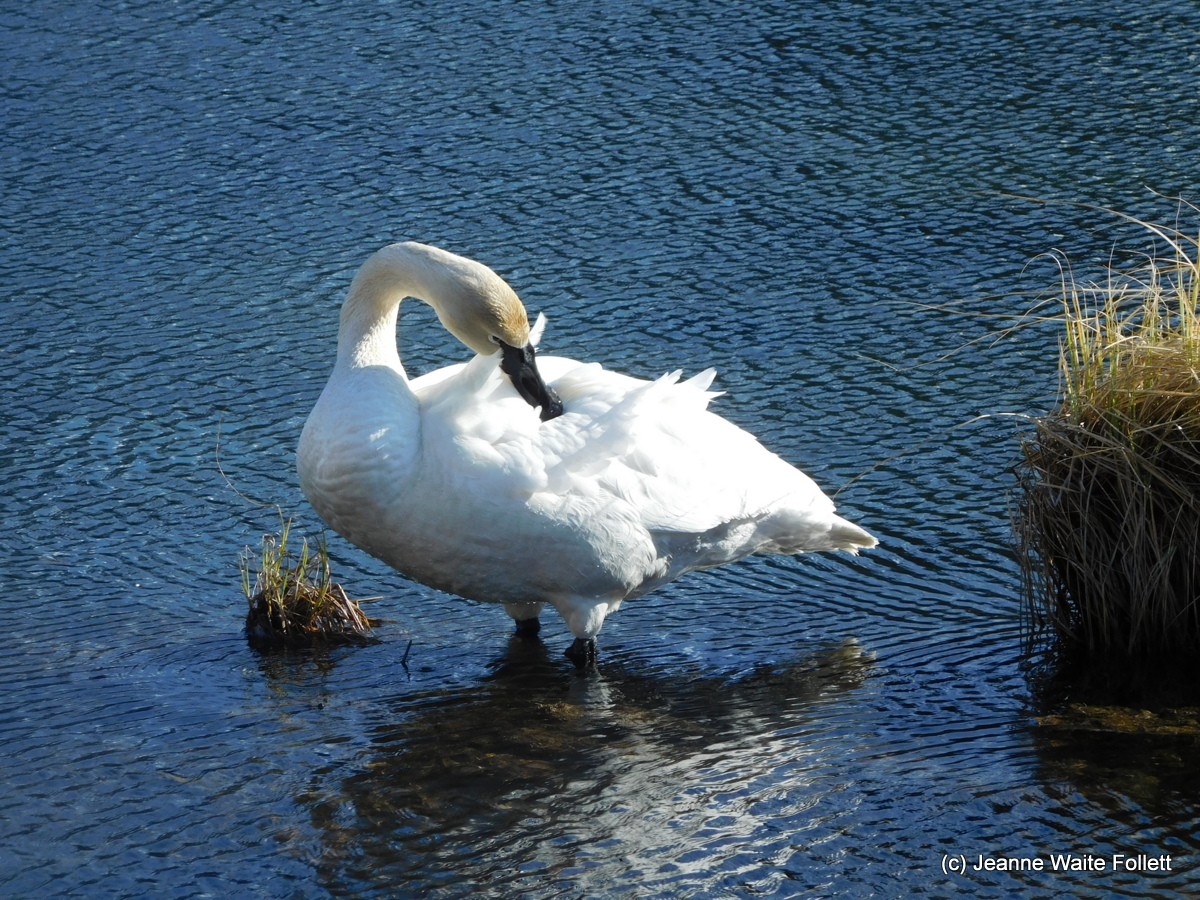 Vehicles stopped nearby on the side of the highway, but the swans remained, barely twenty feet from me.    I moved around a bit to get clear of the willows growing along the shore, but the birds remained. 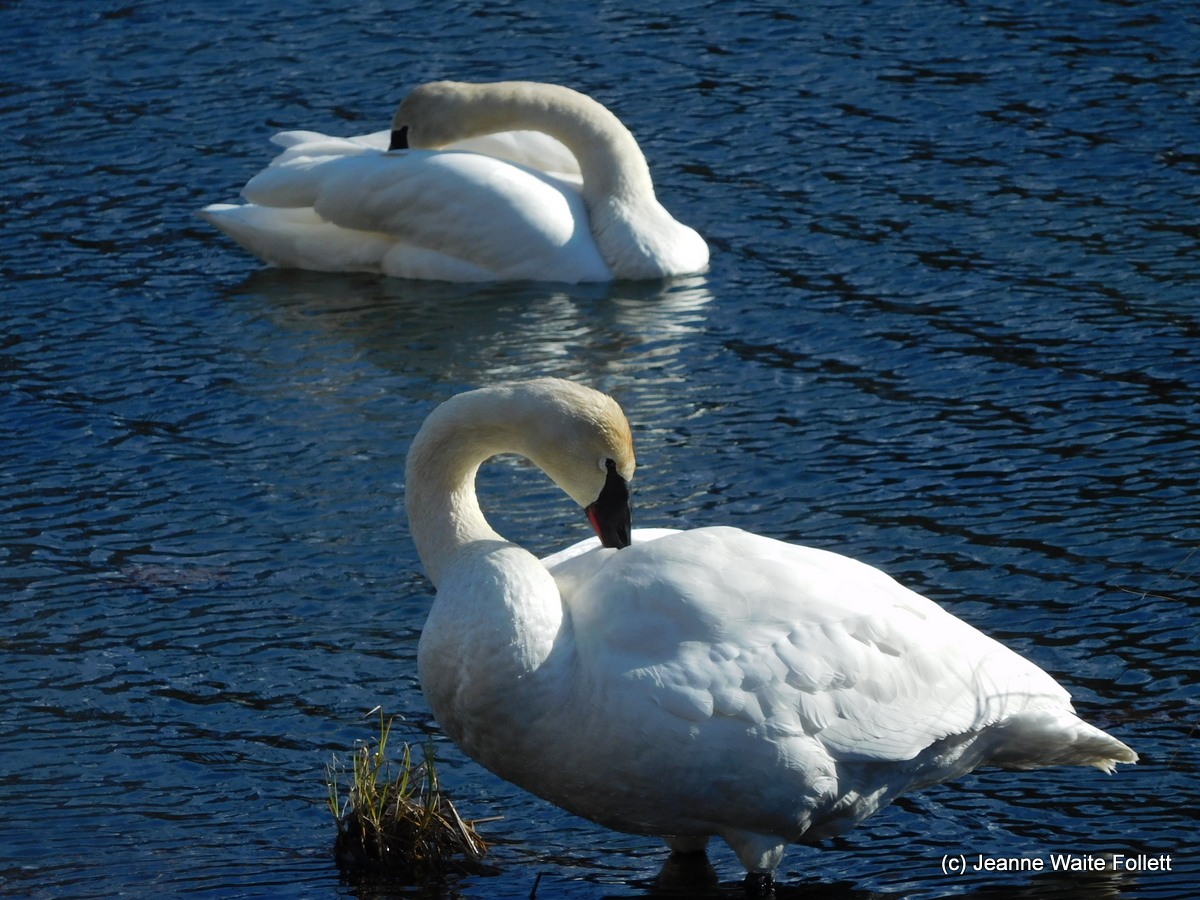 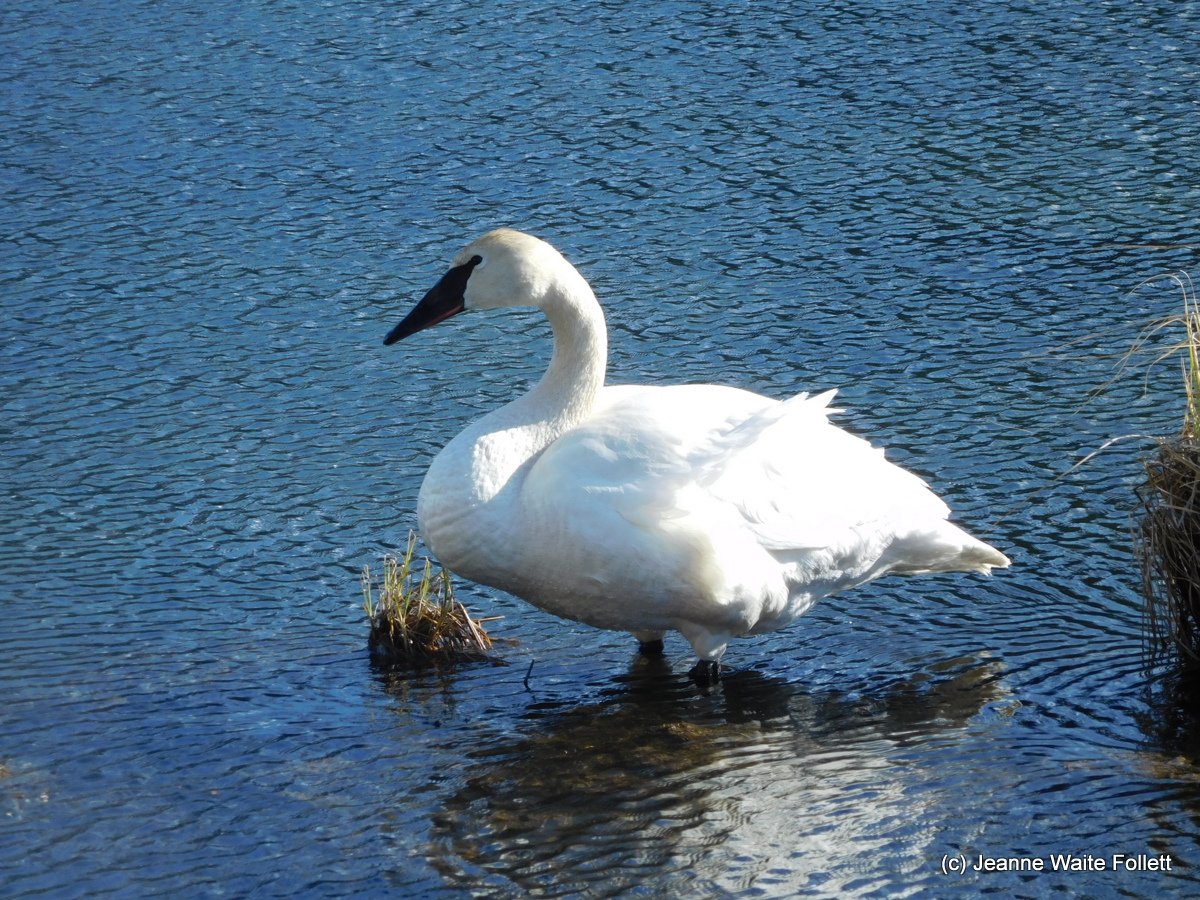 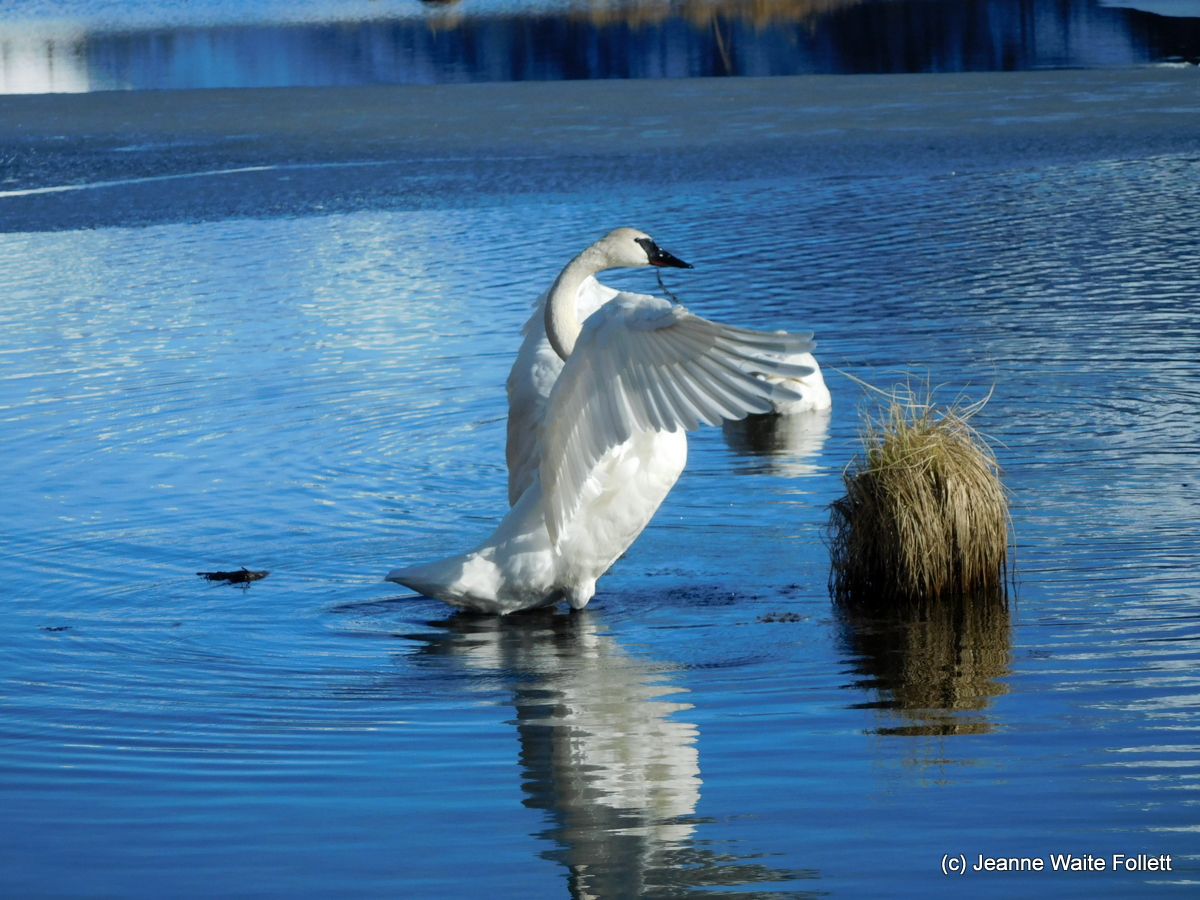 I wonder if this is the pair that took up residence last summer at Tern Lake and have been hanging around in the open  water at the head of the creek.   If so, they've certainly gotten over their shyness during the winter. 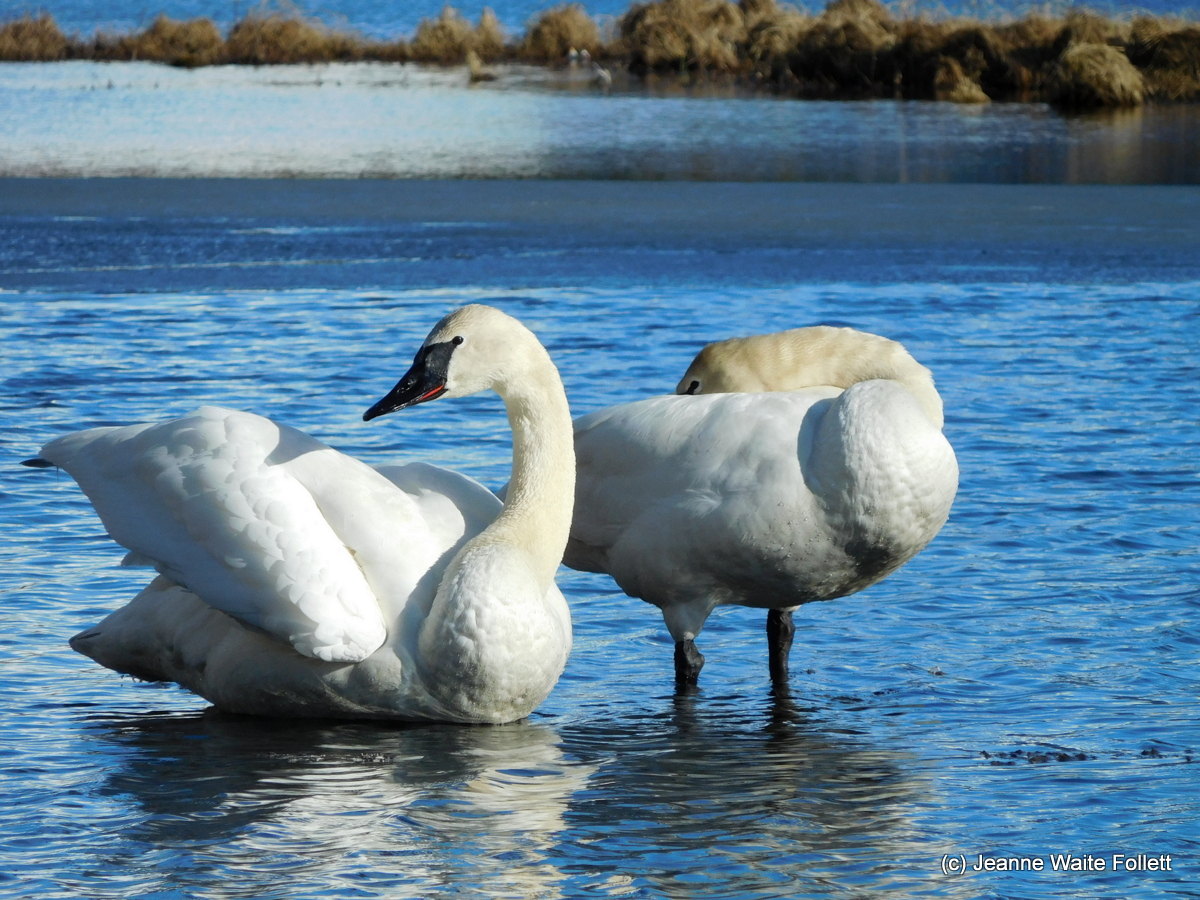 The cob, behind, takes a nap while the pen keeps watch. 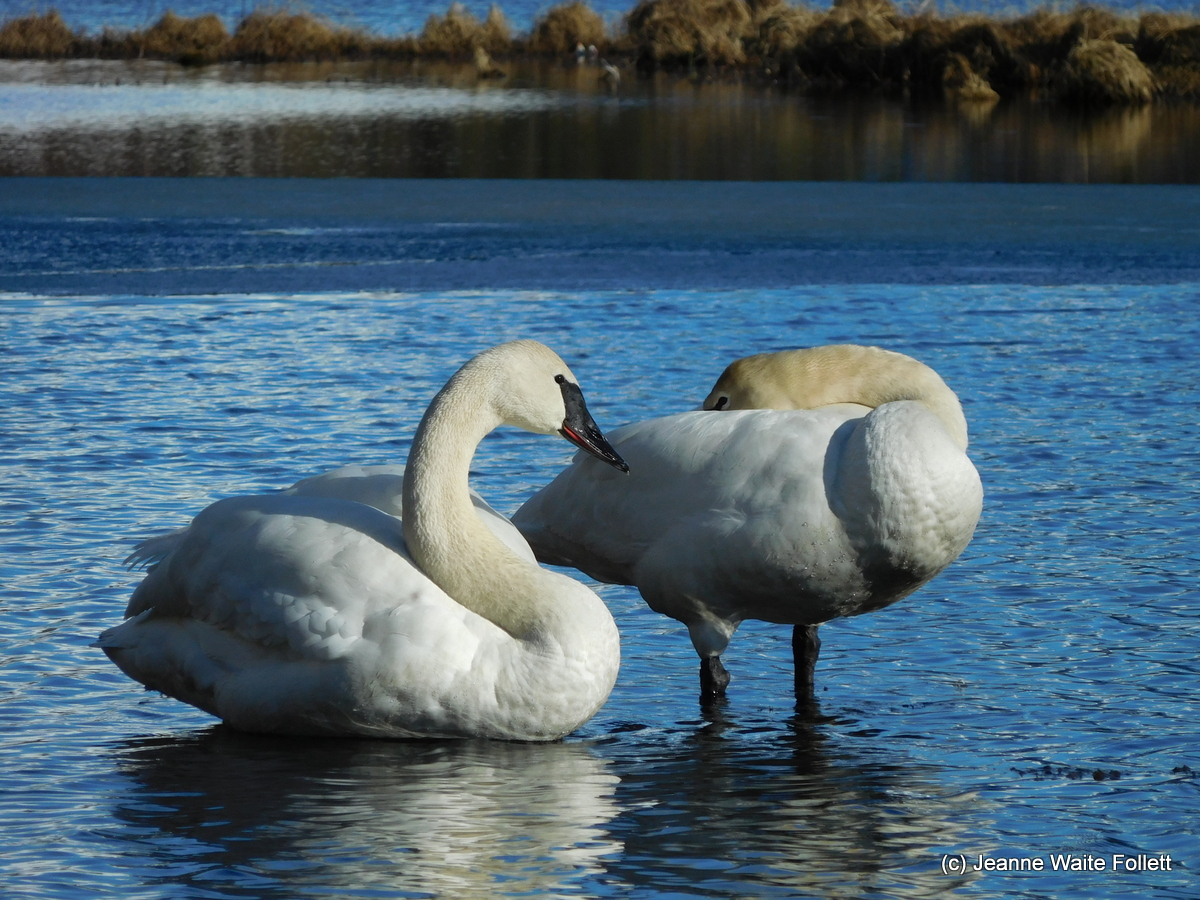 As long as I stood there, they remained. 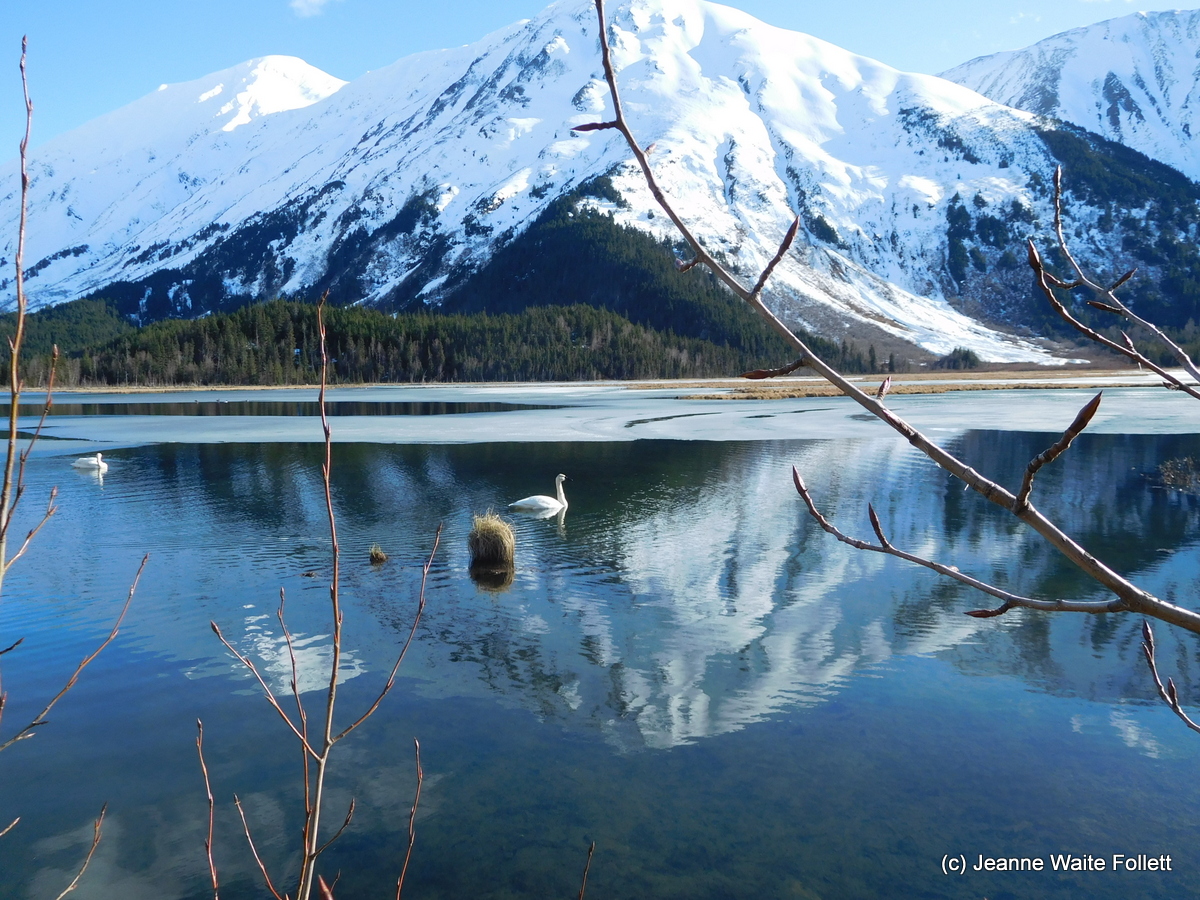