The 2nd Fur and Feathers Journals, Ch. 9 , In which Crimp Ear sullies her reputation

Chapter
In which Crimp Ear sullies her reputation

Crimp Ear, a large Coastal Brown bear sow that lives in the Silver Salmon creek area, nudged her third season cubs out into the world this spring, to fend for themselves.  The cubs apparently went willingly, confident that the things they learned from their mother would keep them fed.

Then Crimp turned into a boar-chasing vamp, shamelessly mating with every boar she could find, and I do mean find, because she went looking for them.   She was observed mating with at least three boars, and who knows how many she encountered in the forest beyond the coastal area where she was unobserved.

Here's some info from an Internet site about brown bear mating.

Mating of brown bears takes place from May to July, although the fertilized eggs are not implanted in the uterus until hibernation. Births occur during January and February, while the female is in hibernation. Females remain in estrus throughout the breeding season until mating occurs, and do not ovulate again for at least 2 (usually 3 or 4) years after giving birth. Generally, two offspring, which are blind at birth, are born per litter and remain with their mother until their third summer of their life (usually until the fourth, at 3 1/2 years old) unless premature death occurs, commonly caused by other bears, leading to the belief that males may intentionally kill young cubs so females return to estrus, although this is currently a controversial issue and there is no scientific data supporting this belief. Brown bears mature sexually between 5 - 7 years of age - females first, then males - but continue growing until they are 10 - 11 years old. Bears have been known to live and reproduce at 25 years of age, with a potential life span of up to 35 years.


The largest of living carnivores, grizzly bears are 5 - 8 feet in length from head to rump. They are 3½ - 5 feet tall at the shoulder and can tower at an intimidating height of 8 - 10 feet when standing upright on their hind legs. On average, adult males are larger than females. Ursus arctos is largest along the coast of southern Alaska and on nearby islands where mature males can weigh as much as 1,400 pounds and mature females 700 pounds. Size rapidly declines to the north and east. Fur is usually dark brown, but varies from light blond to almost black. Individuals in the Rocky Mountains have long hairs along the shoulders and back, which are frosted with white, thus giving a grizzled appearance and hence the common name "grizzly bear". Ursus arctos has an excellent sense of smell (able to follow the scent of a rotting carcass for miles), human-level hearing and eyesight. Brown bears are extremely intelligent, resourceful and opportunistic, allowing the grizzly to live in a variety of habitats.
Adult males of the coast of Katmai National Park and the Alaska Peninsula are among the biggest brown bears on the planet, even as large as the famous Kodiak brown bears, considered to be the largest in the world.

“There’s Crimp,” said Rick one evening as we drove along the inland trail from the lodge toward the southern creek crossing.

She was out in the salt marsh between the lodge and the beach vegetation.

“We might not be able to get close to her as it’s still mating season,” he said.   He was right.   Crimp Ear wasn’t ready to have those two-legged things that make constant clicking noises (camera shutters) ruin her chances of a boar encounter of the close kind.

Though we kept our distance and used our long lenses, she moved steadily away from us and we gave her the room to do so.

We didn’t see her again until our last evening at the lodge.  Riding along the beach, we came across her walking south near the water line.

Staying high on the beach, Rick took us far past her where we stopped and watched her steady approach.  She never varied her pace as she neared us, keeping to a certain distance from the water. 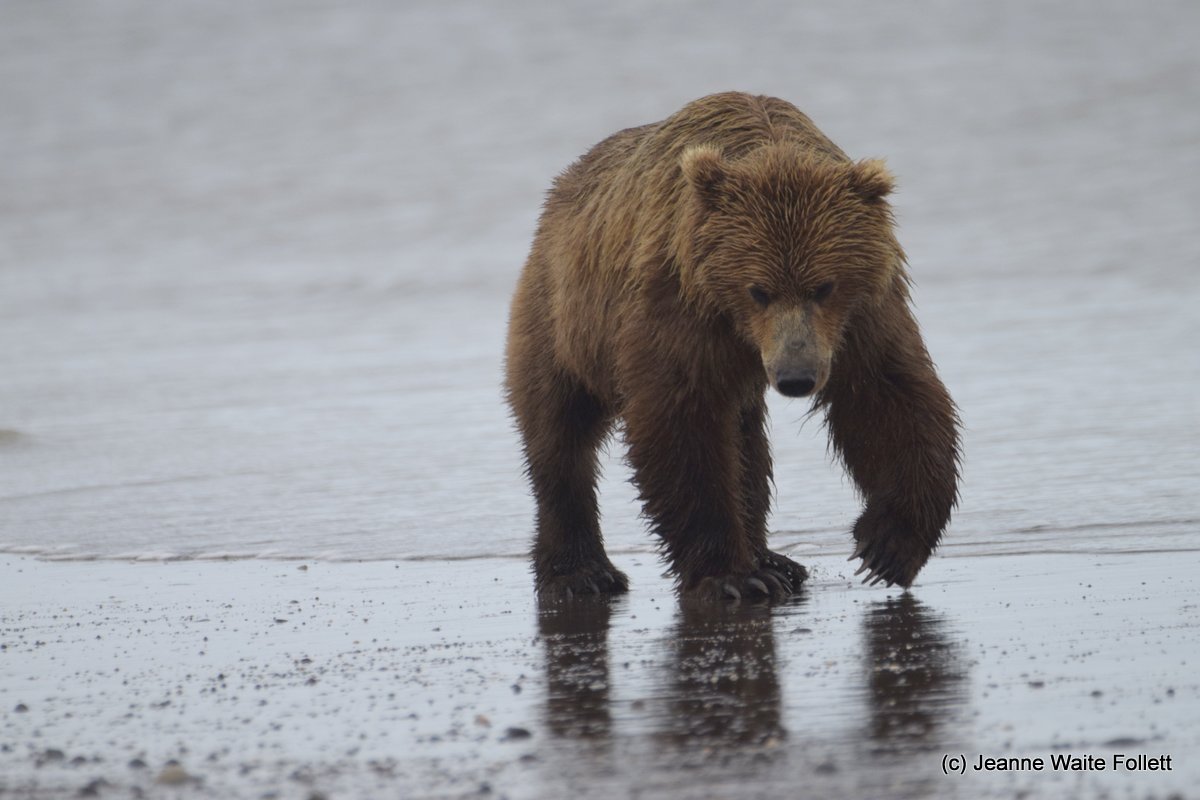 I interpreted her body language as unhappy and dejected. 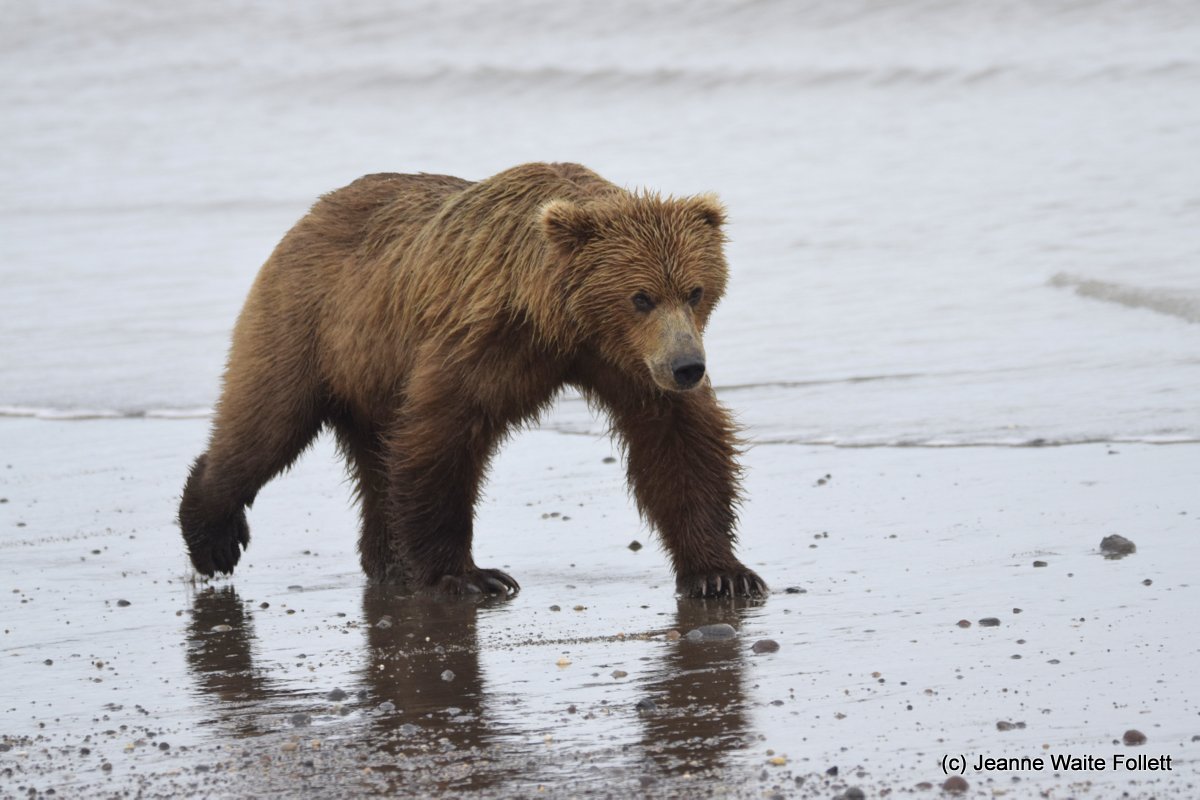 Then, as she passed directly below us she huffed, a noise you don’t want to hear from a brown bear, as it indicates the bear is displeased. 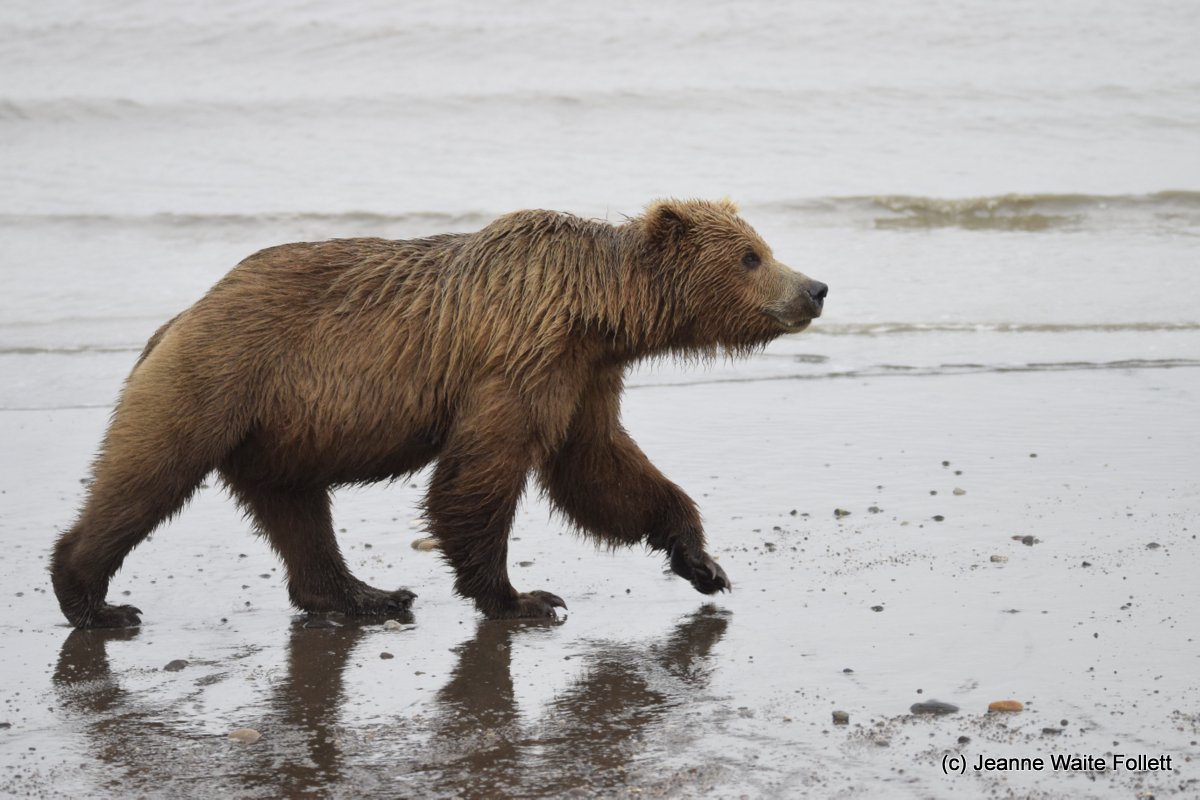 Was she angry that we had gone ahead of her?   Unhappy with the constant clicking noises that emanated from our group? 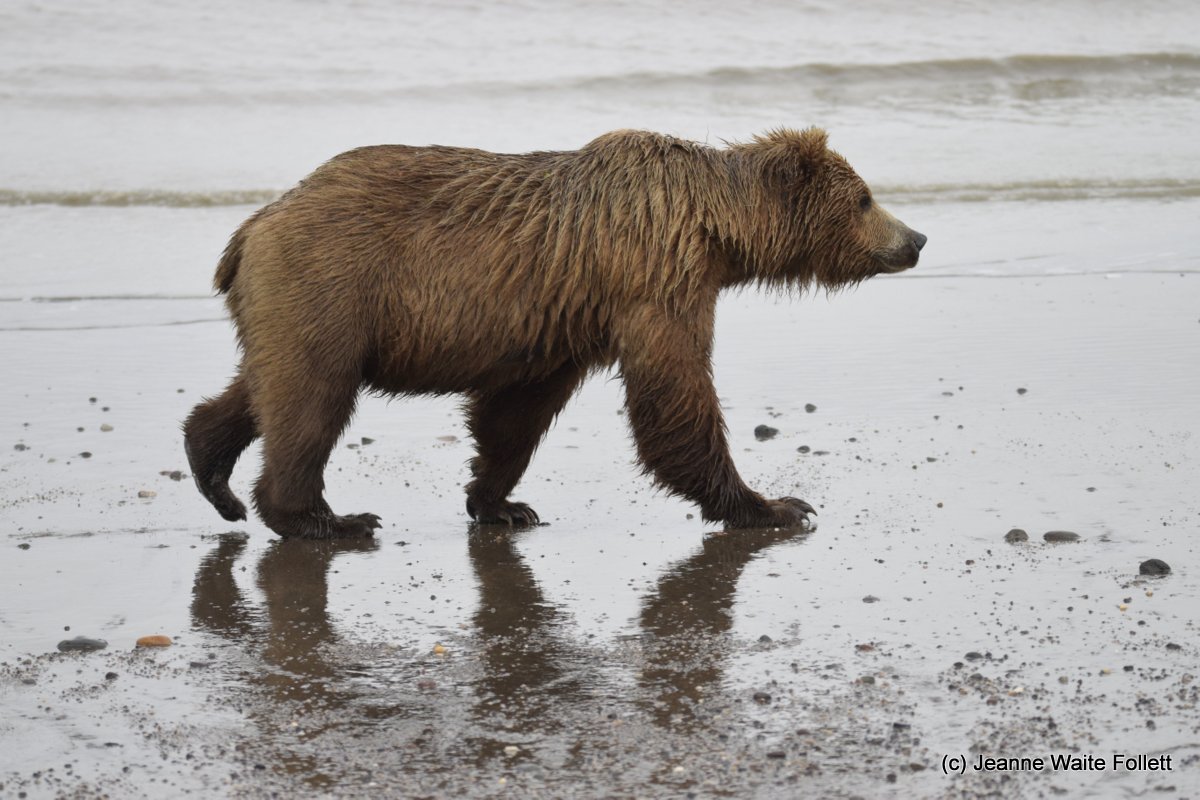 Actually, I think the big ol’ hussy was in a bit of a snit because mating season was over. 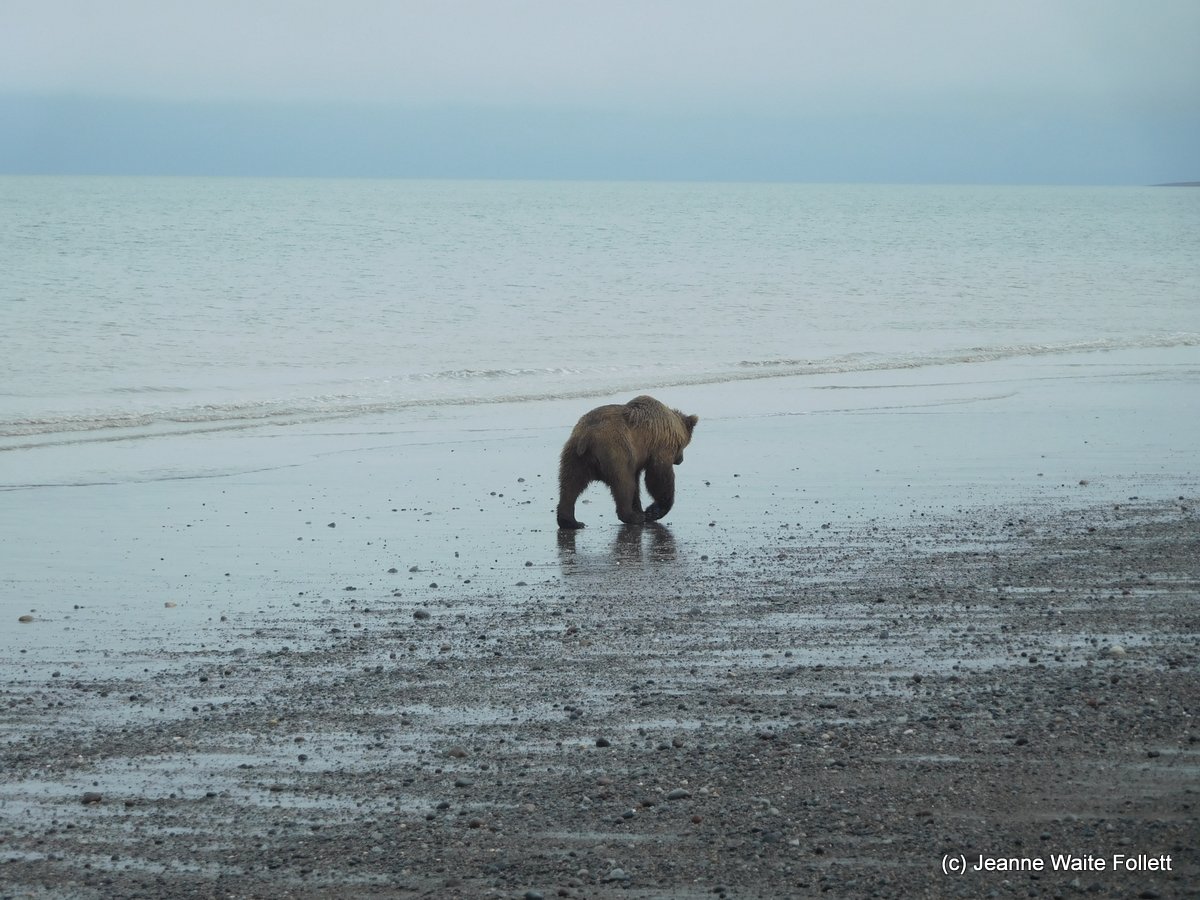