The 2nd Fur and Feathers Journals: Chapter Ten, In which a big brown boar makes our day

In which a big brown boar makes our day

Each evening I snuggle into the cozy flannel sheets on my bed at Silver Salmon Creek Lodge and think the same thought:   NOTHING can possibly beat what happened today.

And the next evening, I think the same thing and remember the remarkable Coastal brown bears we’d seen that day.

Today, though, I am pretty sure I am right.   Nothing will beat a young brown bear sow intentionally sitting down thirty feet from us in the yard of our cabin and nursing her two new cubs.   Absolutely guaranteed.   That was such an example of a bear trusting humans, when she is at her most vulnerable, that I am struck dumb when I think of it. 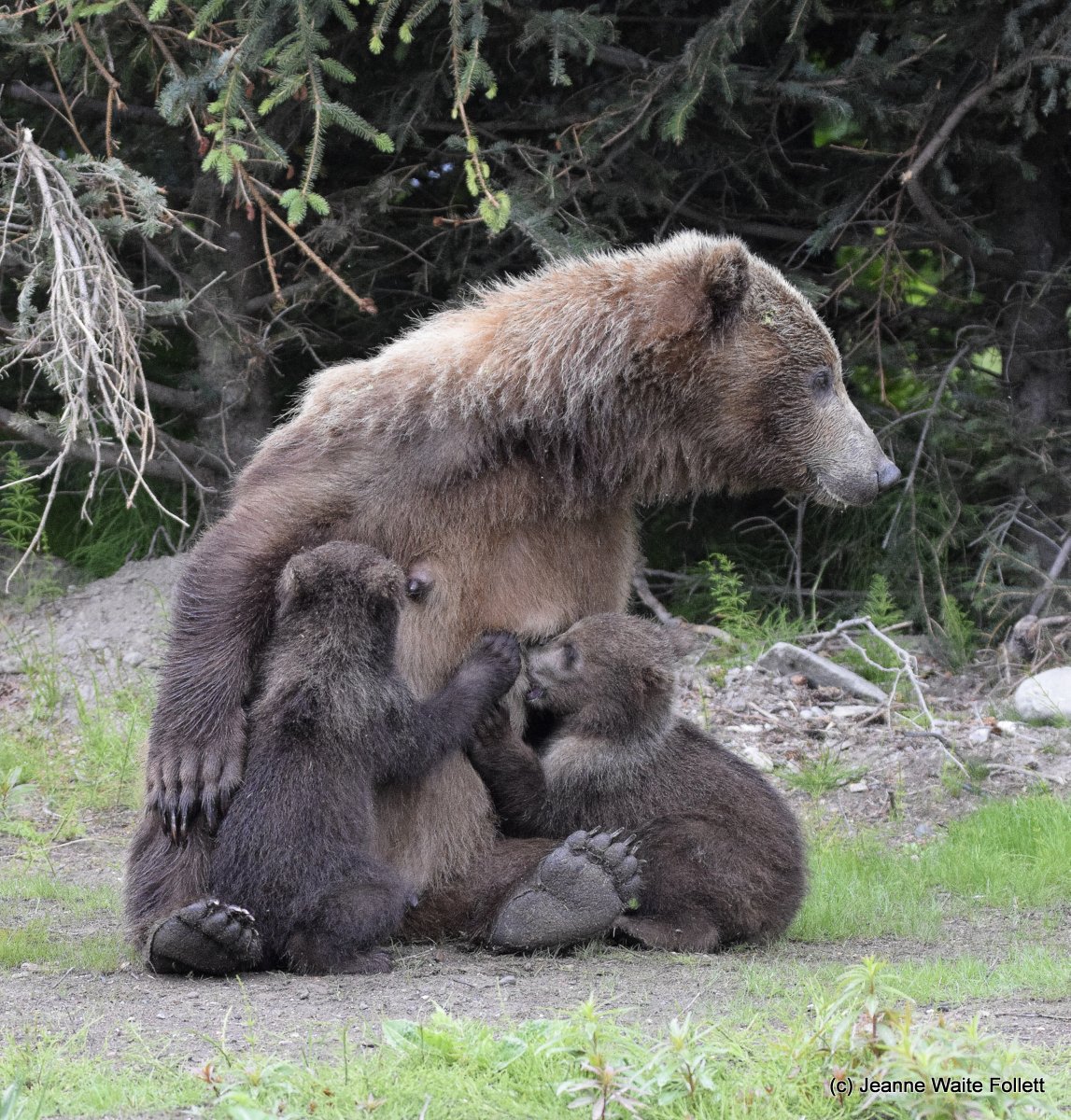 Thus, I am confident but hopeful when we set out for the northern meadows.   Rick gets off the ATV and scans for bears.   This is where we usually see sows with cubs, but they aren’t there this afternoon. 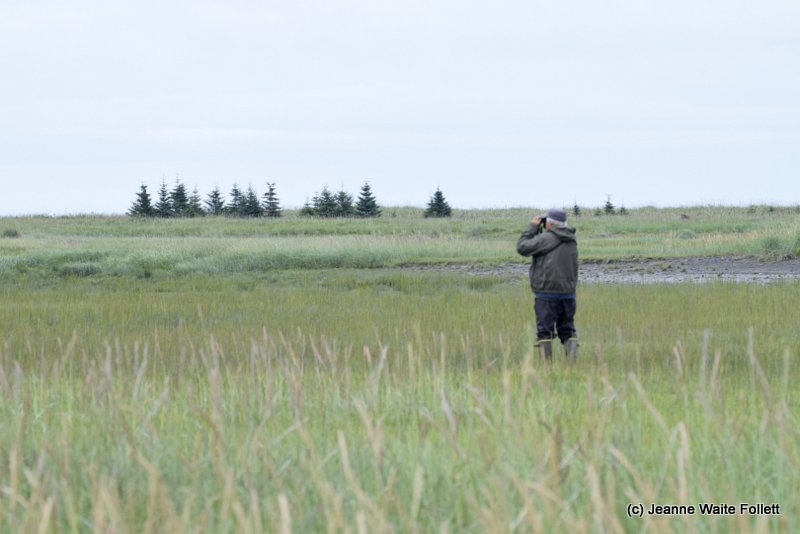 I try to photograph small forever-moving birds while we wait for Rick's scan.

We reach a fork in the trail with the left one going to the last cabin in the row of cabins past the high tide mark.   It happens to be owned by my long-time friend Jerry Bernas, who had gone back to Anchorage just before I arrived here.

Rick stands up on the ATV’s foot pegs and looks down that fork, sees nothing and we continue along on the right fork, passing Jerry’s cabin.

Suddenly, a flash of blond fur, a rustling of bushes, another flash of fur, more shaking bushes.  There’s a bear, but we can’t tell if it has cubs.

Then it’s out in the open—a huge light-colored boar and it’s coming right towards us.   Rick tells us to stay in the trailer and be quiet.   The boars, he says, aren’t as trusting.   Unspoken is the knowledge that it might still be mating season and one does not want to get between a boar and a sow at that time.
The boar continues his approach and veers towards Jerry’s cabin, where it disappears behind it. 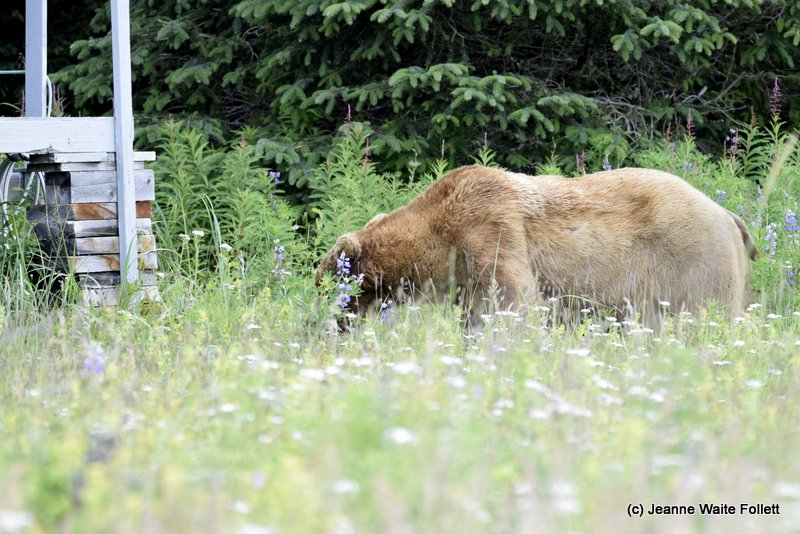 We get out of the trailers and line up a good distance from the cabin.   Here comes the bear! 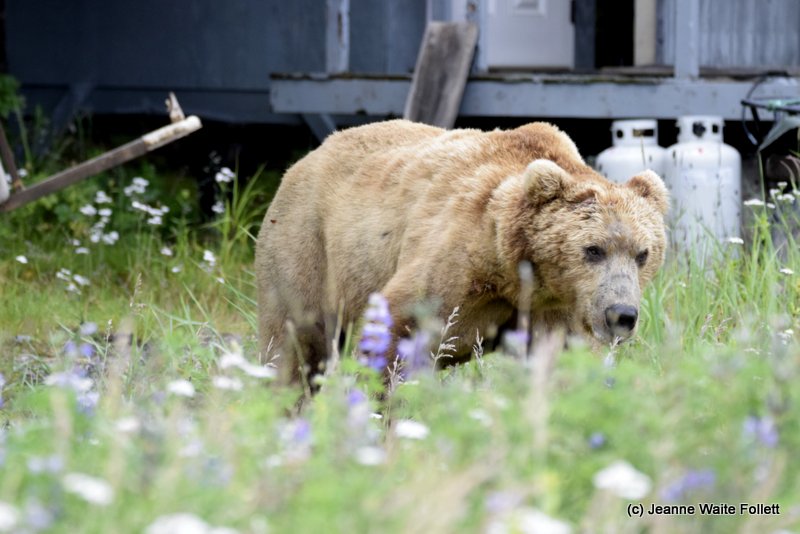 Back up slowly, says Rick.  We do, careful to stay in a tight group.

We back up through the lupine and yarrow, the rattlebox and grass, hoping we don't step in a hole or fall over a hidden log. 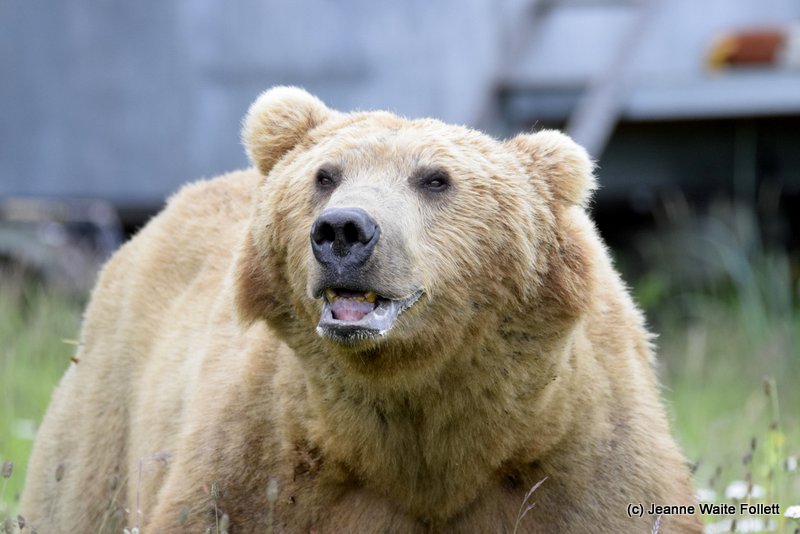 Again, the boar walks towards us.   By this time, he is far too close for the mega-lenses on our cameras and it’s impossible to get all of him in the frame.

I stop breathing for a few minutes as the king of the forest passes directly in front of us. 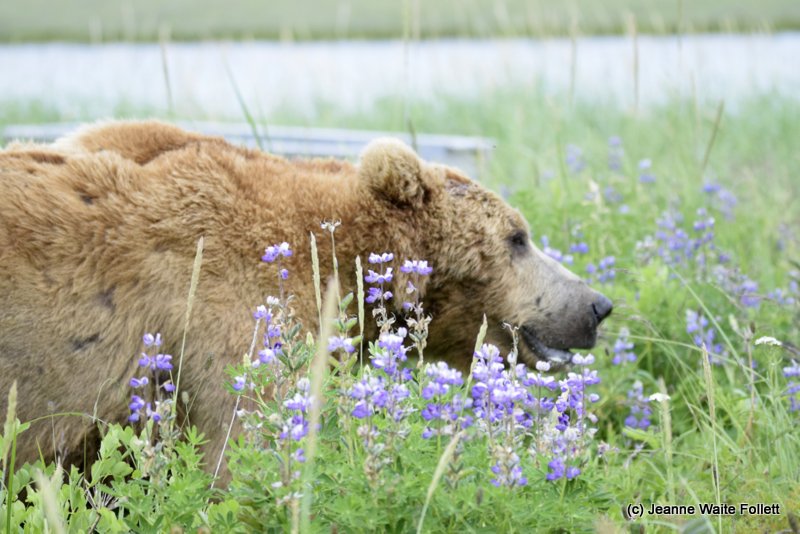 He appears placid enough, so maybe mating season is over. 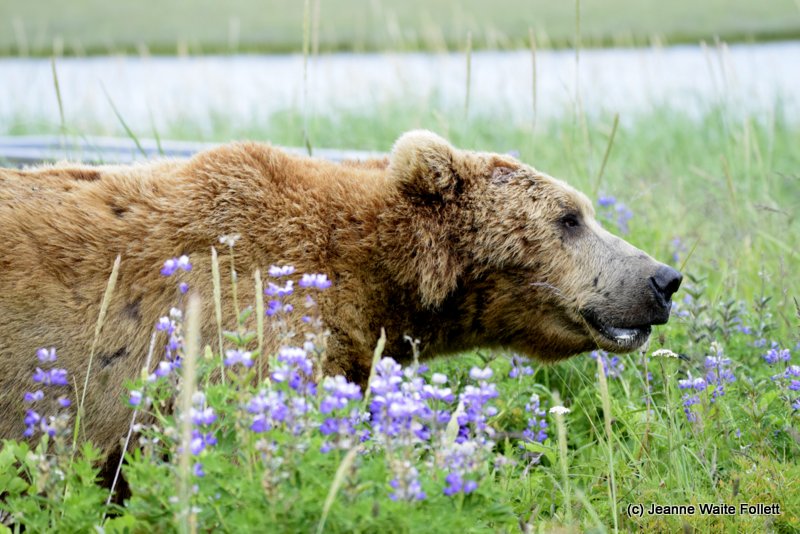 In fact, he appears downright huggable! 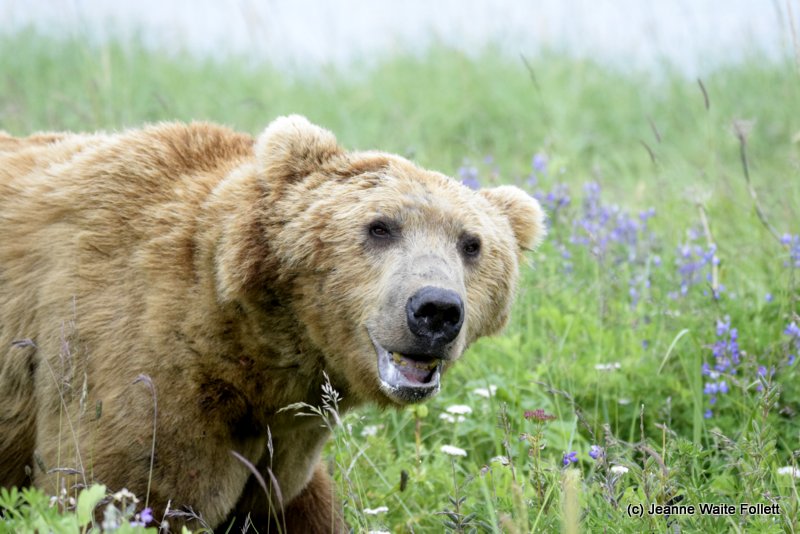 We wait until he’s away from us, then get back in the trailers.   The boar disappears into the forest behind the cabins. 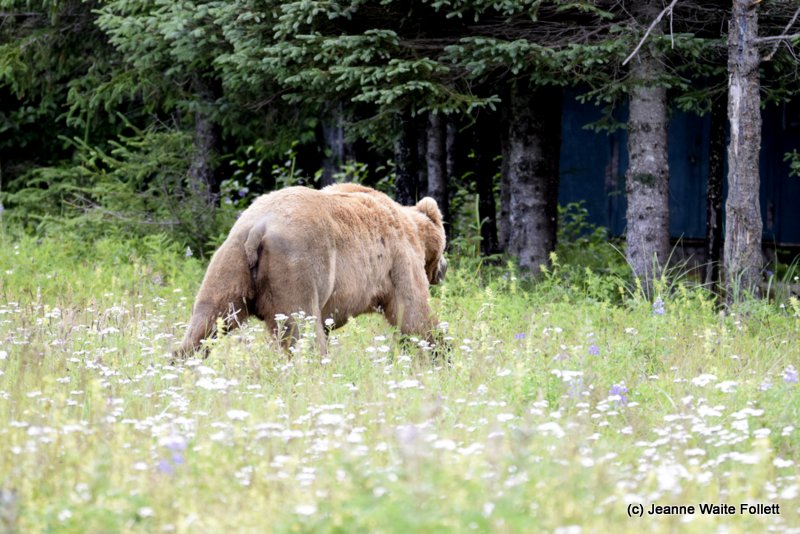 We wait, but don’t see him again, so we start back to the lodge.

Just before the main lodge, the same boar comes out onto the trail, then turns into a small path that leads directly to the lodge. 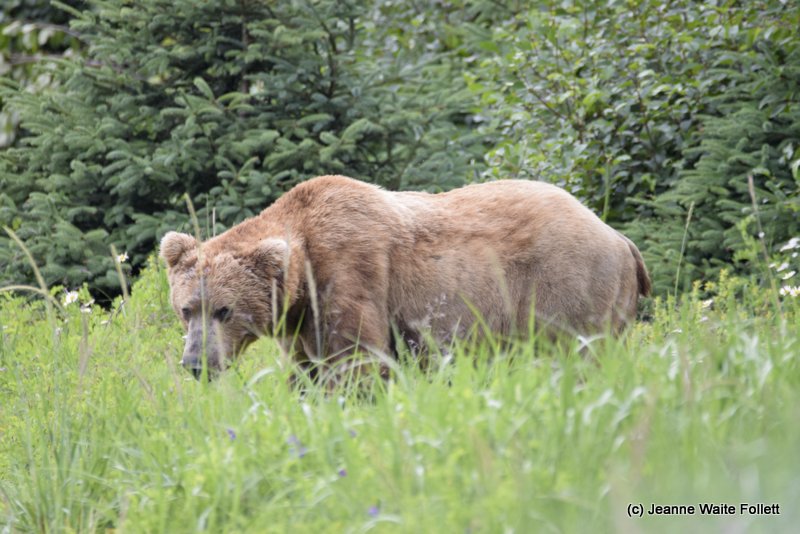 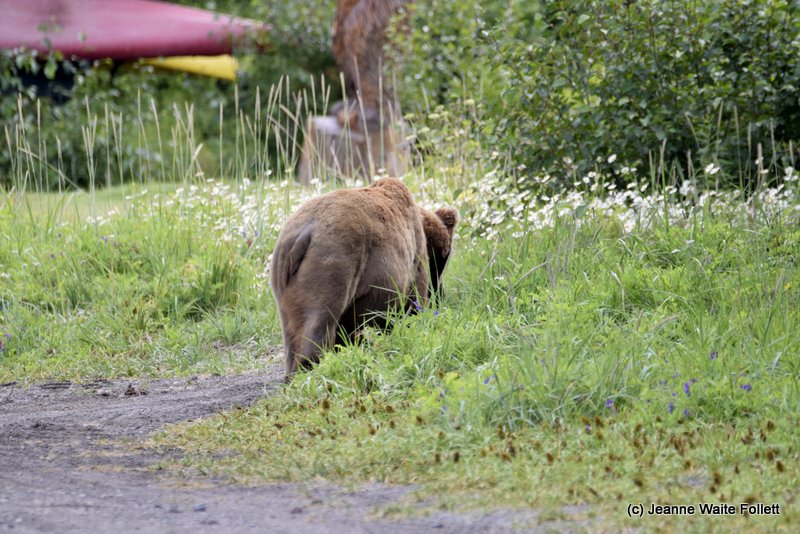 Rick takes us around the back side of the lodge parks the ATV and trailers.   We expect to see the bear back there, but then realize he's directly under the front deck of the second floor dining room.

Pretty soon we’re all lined up on and around the steps to the deck,  where we watch the bear lick at the ground.   Earlier in the day, someone had cleaned razor clams there and the bear had smelled the spot. 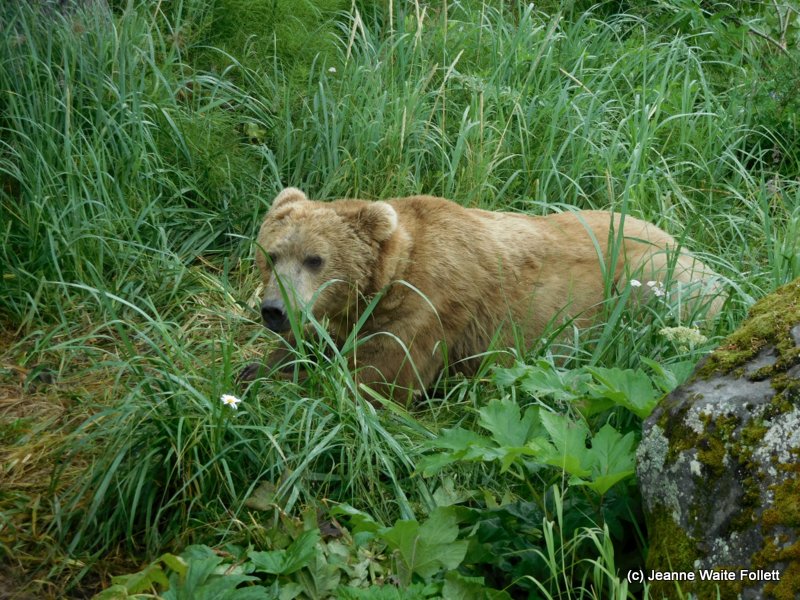 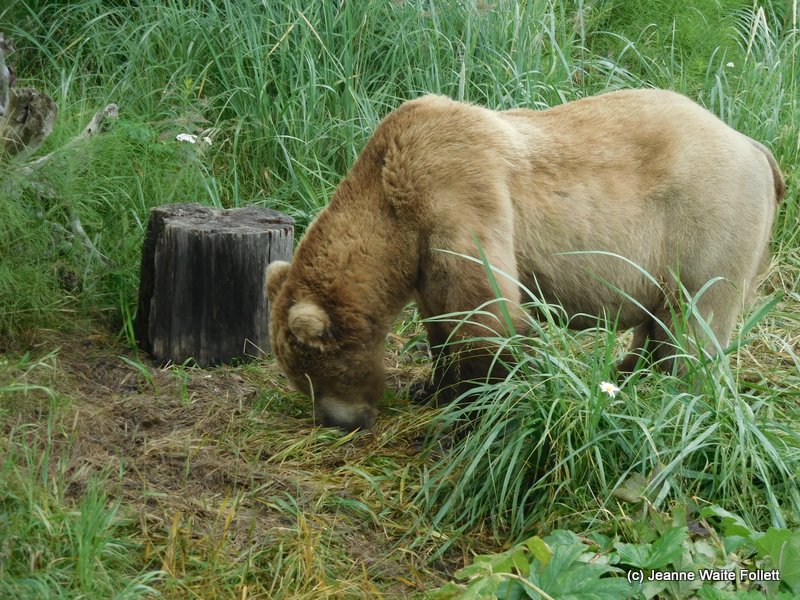 He paws and licks, over and over. 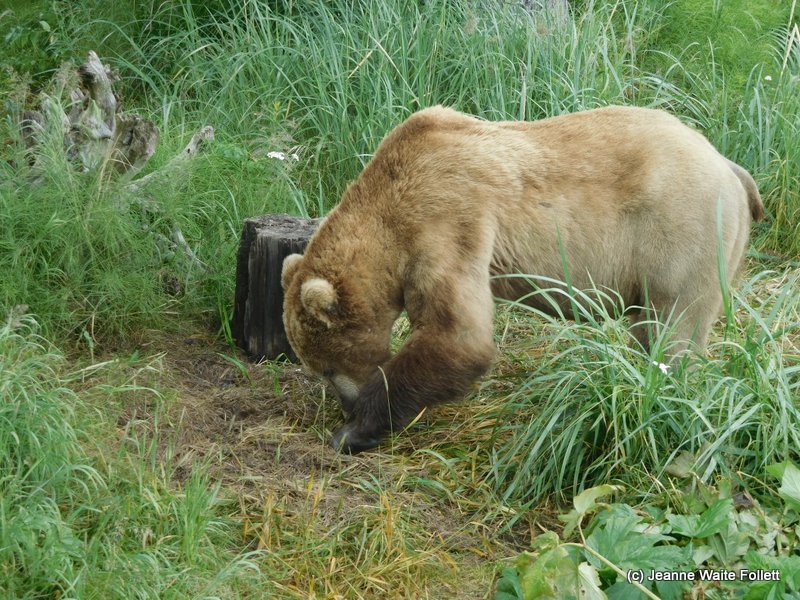 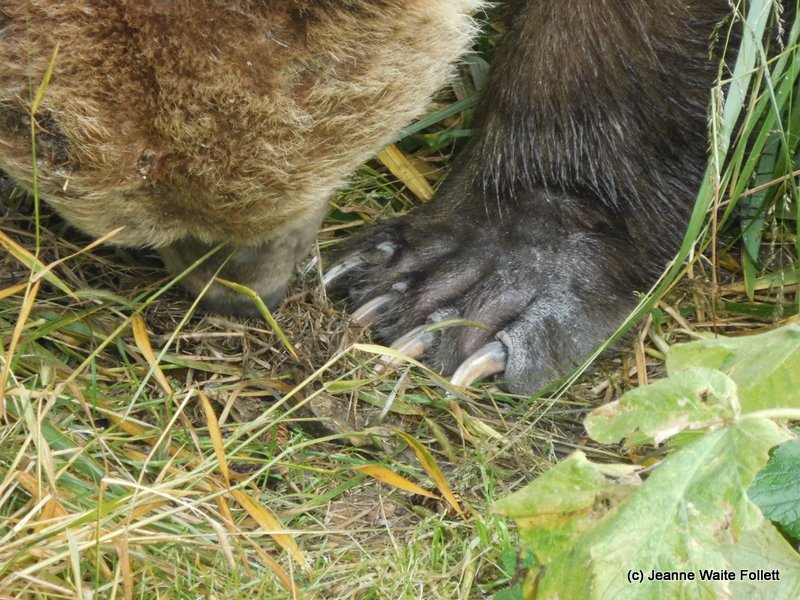 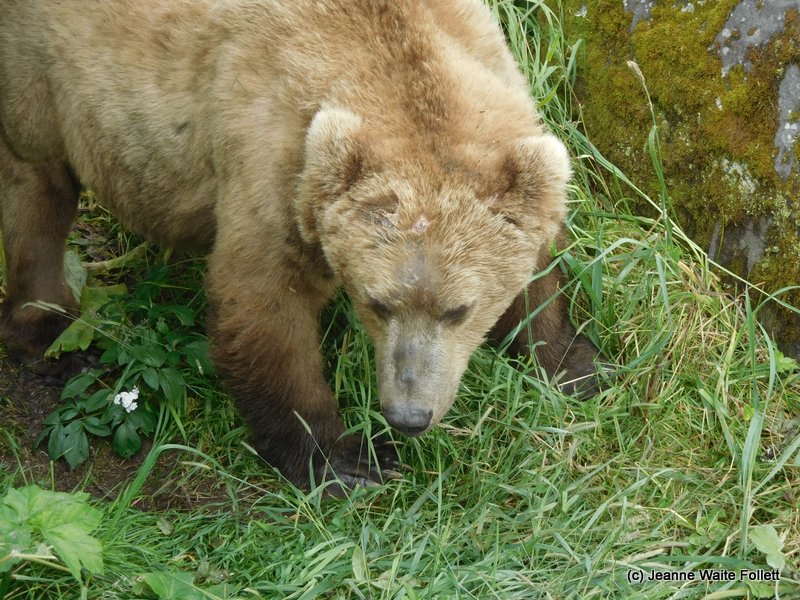 At one point, he grunts and rolls on his back, his bear junk modestly covered by a nearby pushki leaf. 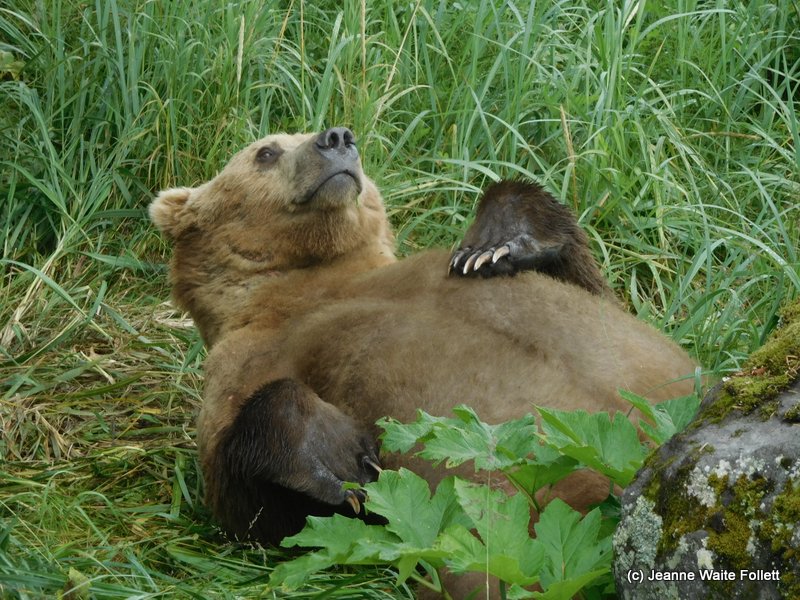 When he’s had his fill of dirt that tastes like clams, he walks around the far side of the lodge…..

Checks out the fish-cleaning table…… 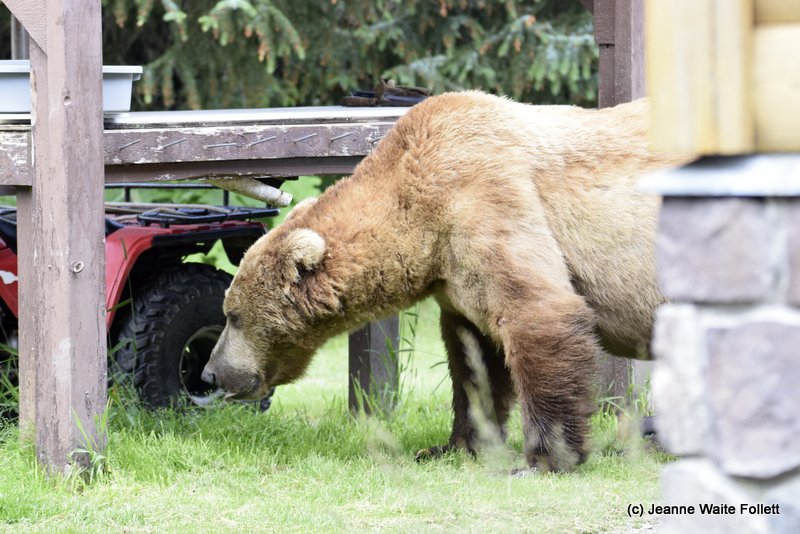 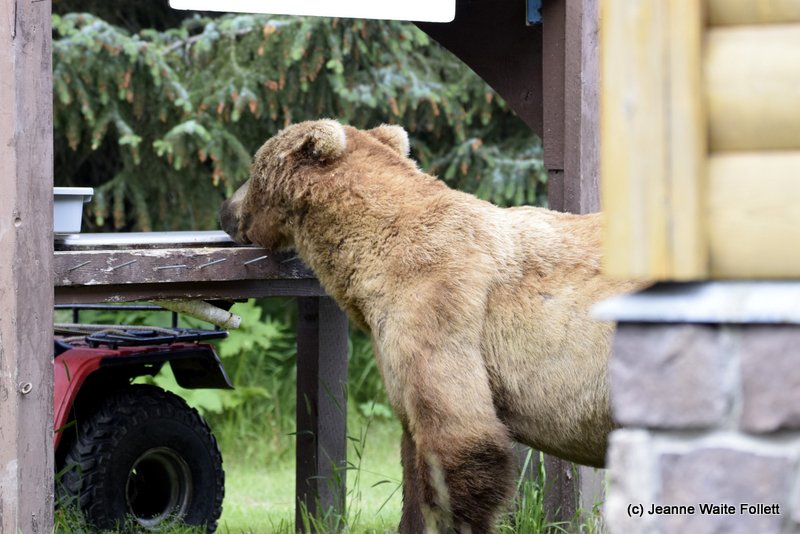 Passes up the soft and chewy foam rubber seats on the ATVs.... 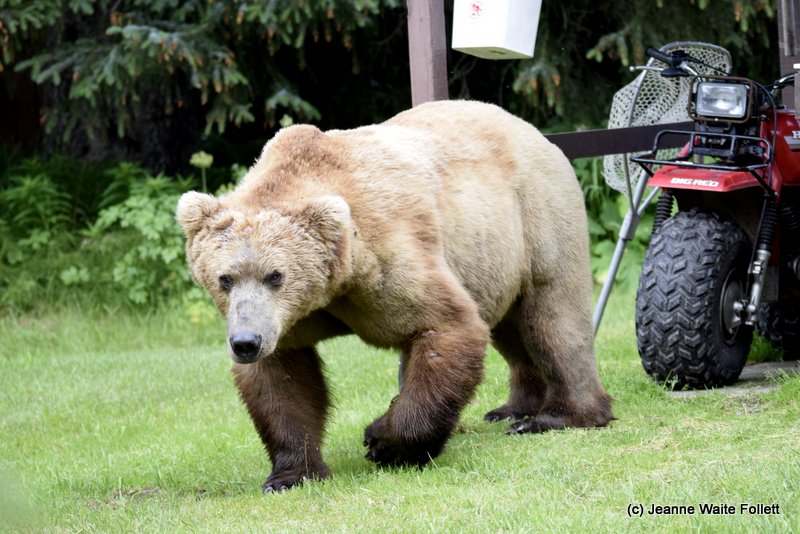 Decides he’s not in shape for the trampoline…. 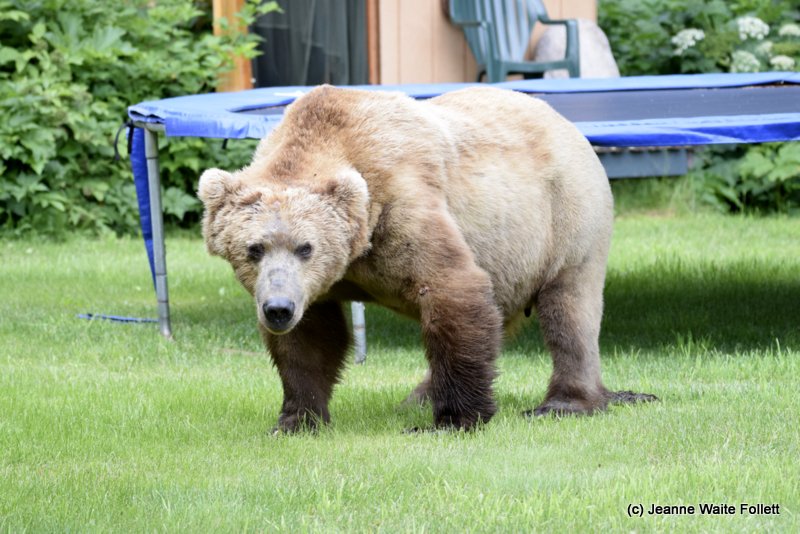 And walks towards us again. 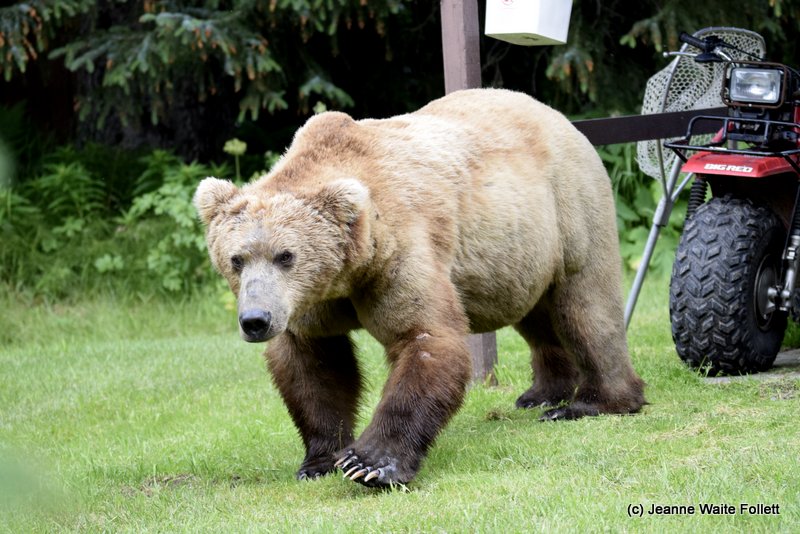 Just at the last moment, he turns and disappears into the forest.   Distance?   Hard to tell, but maybe20 feet?

I start breathing again.    What a sight!   What a bear!    What a remarkable, stunning day!

These close ups show the bear had recently suffered wounds on its head.   If you look closely at the photos showing its front legs, you  can see wounds there also.  Perhaps they are from fighting with other boars during the recent mating season. 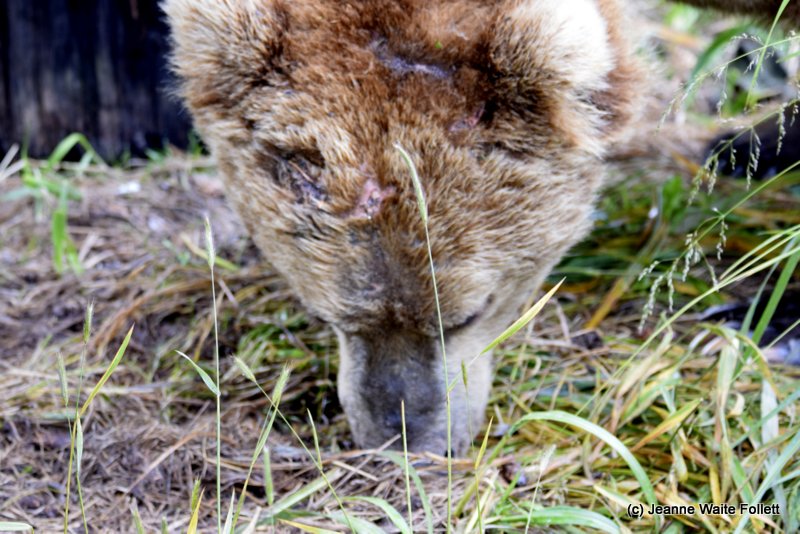 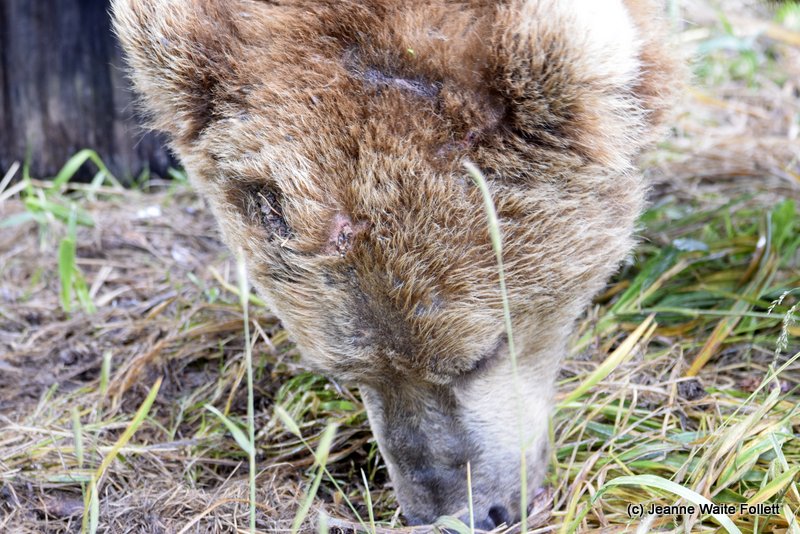