The Kenya Journals, Ch. 19: Patches on the Masai Mara


Patches on the Masai Mara

There is something about safari life that makes you forget all your sorrows and feel as if you had drunk half a bottle of champagne - bubbling over with heartfelt gratitude for being alive.--Karen Blixen


I’m lying on my stomach on the ground of the Masai Mara, taking photos of a kori bustard silhouetted against the first light of a rising sun.  There’s enough light that I could make sure I didn’t plop down on a pile of fresh manure, but as for the years of dried manure that has been deposited on these plains, well, what the heck, it’s just recycled vegetation. 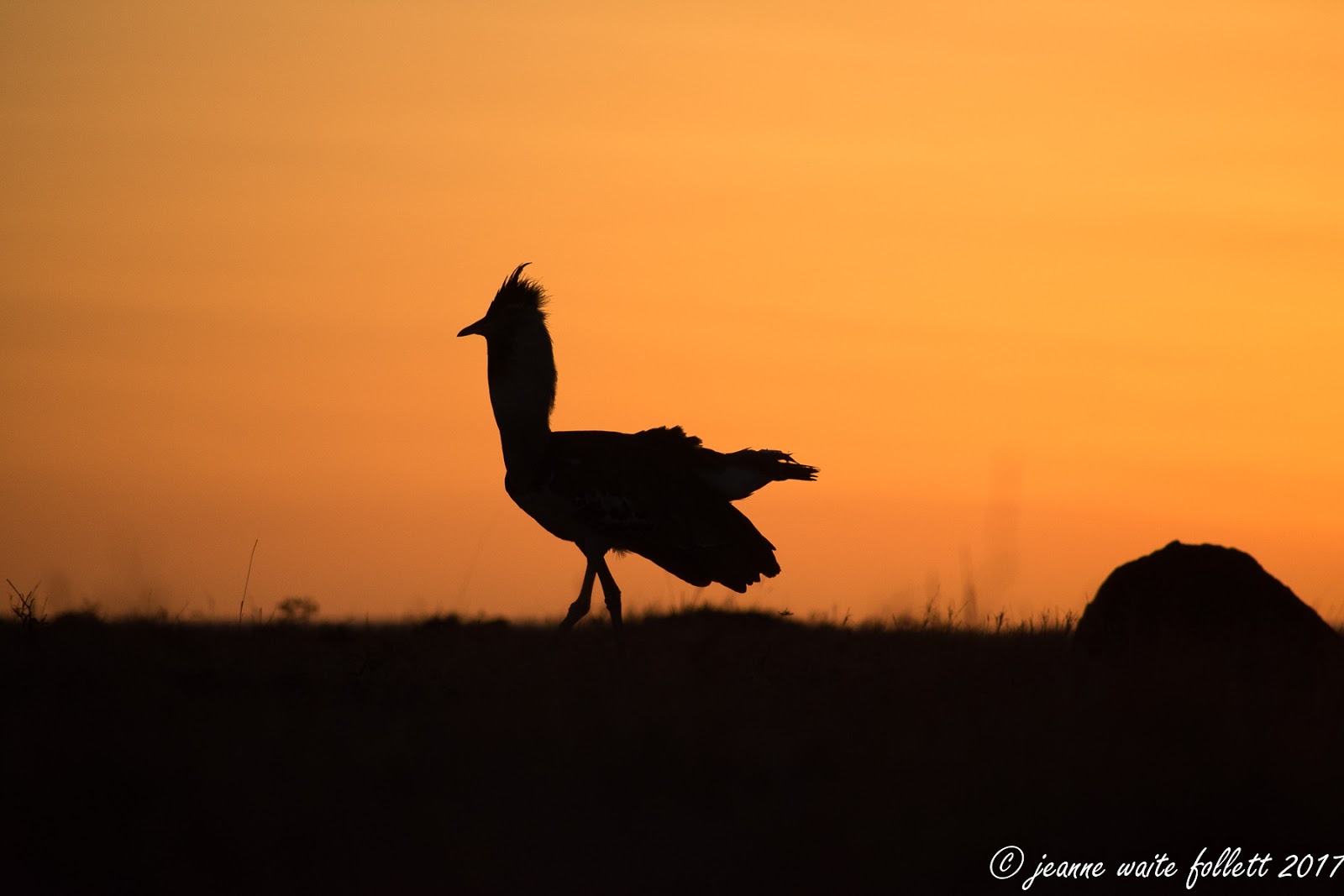 As for looking out for anything else that might lurk in the short grass, I’m more interested in framing the kori bustard that’s parading back and forth in front of me.  A couple days later, I will see a serval eating a snake.   Not until then does it occur to me that I should also watch for snakes before lying on the ground to take photos.


Right now, Greg and Charlie and guide Solomon are waiting for me to finish my foolishness and get back in the safari vehicle so we can go search for spotted animals, and they don’t mean hyenas.  I get back in, look at the camera to check exposure and whether I got the shot I want, and then show it to Greg. 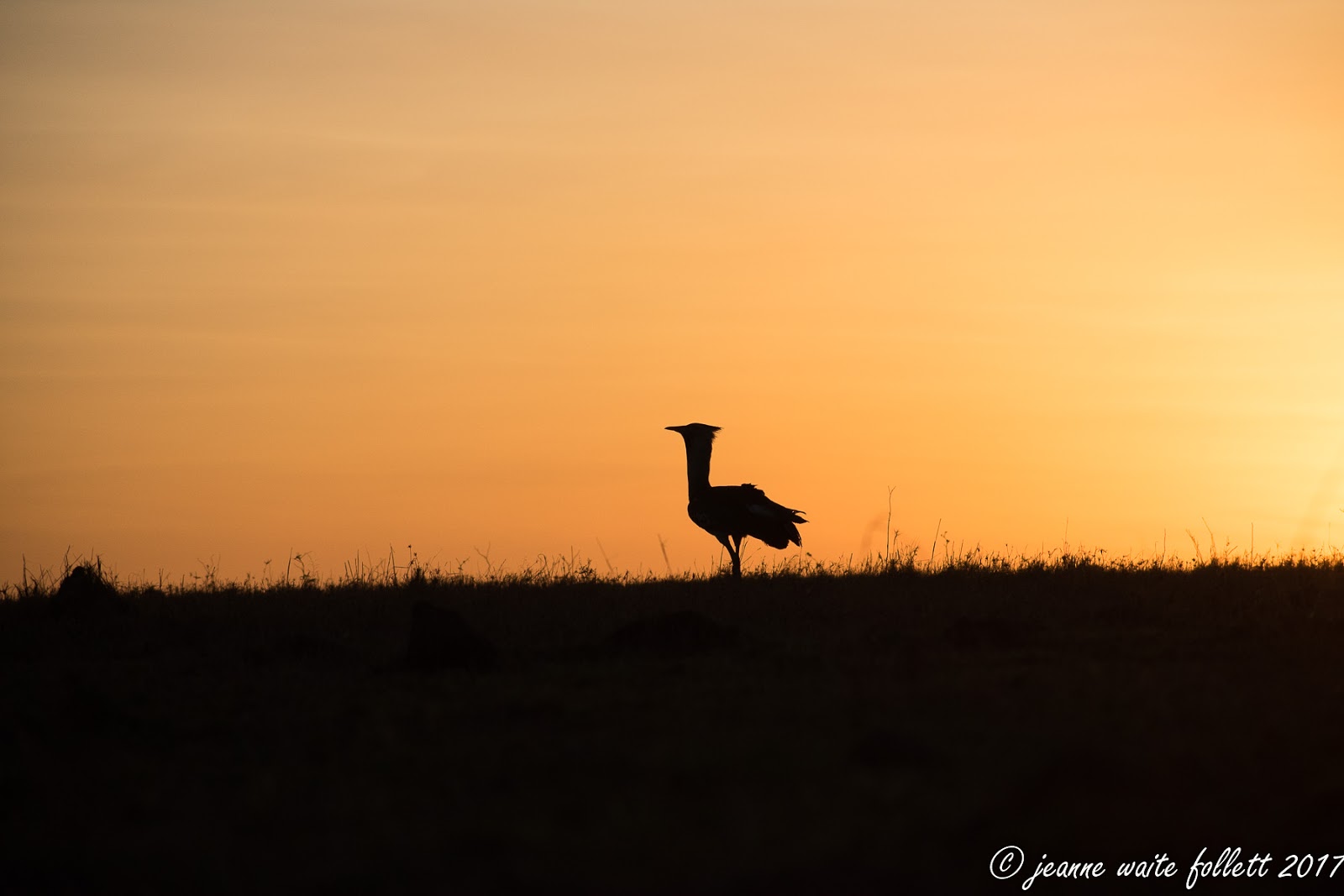 “I’m jealous,” he says and within a minute Solomon has circled around the kori bustard and all three of us are lying on the ground shooting the kori in the sunrise.   Love it when that happens. 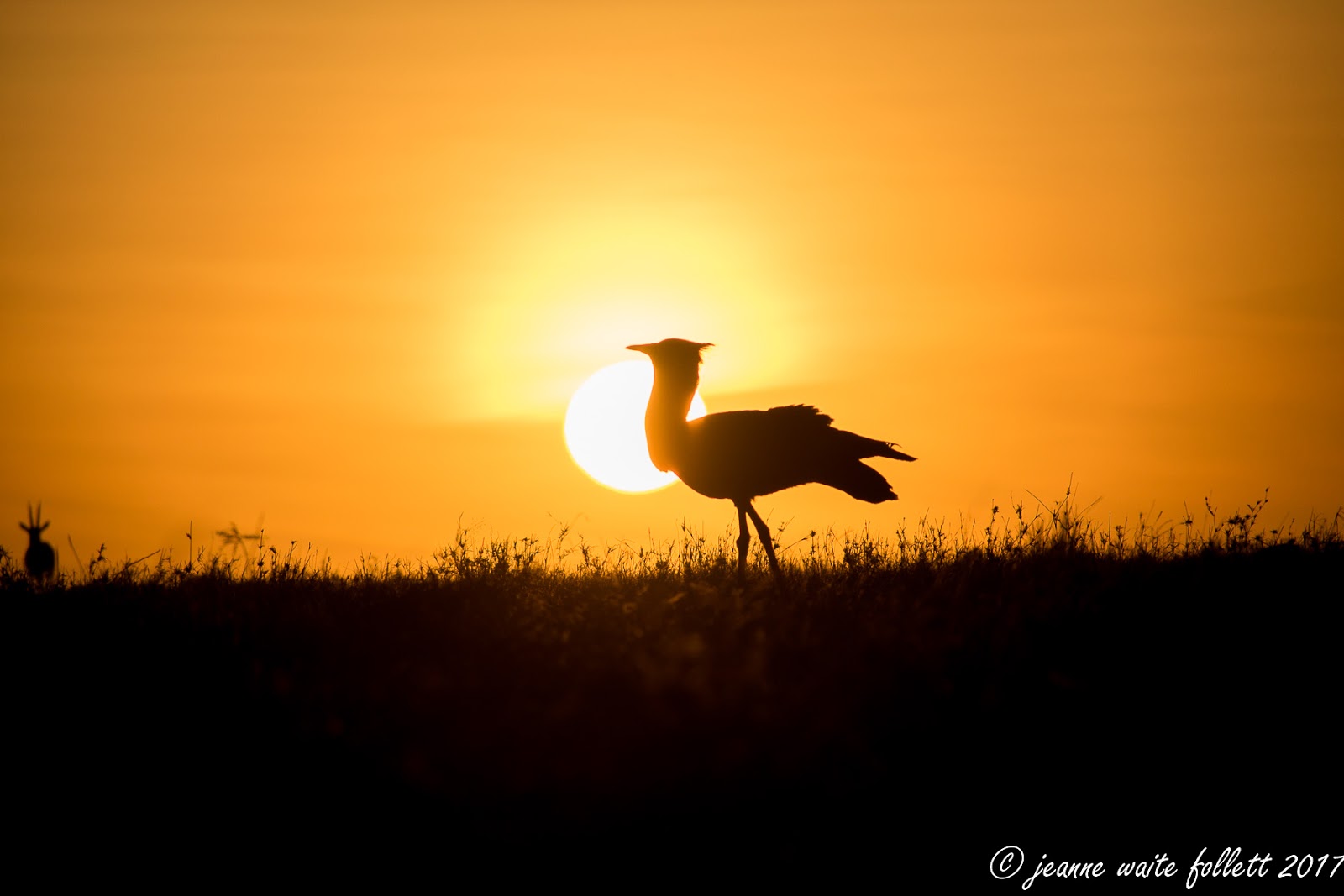 The kori (for short) couldn’t care less.   Though  cautious birds, they can be remarkably unafraid of humans.   This morning, the kori walks back and forth in front of us humans lying on the ground. 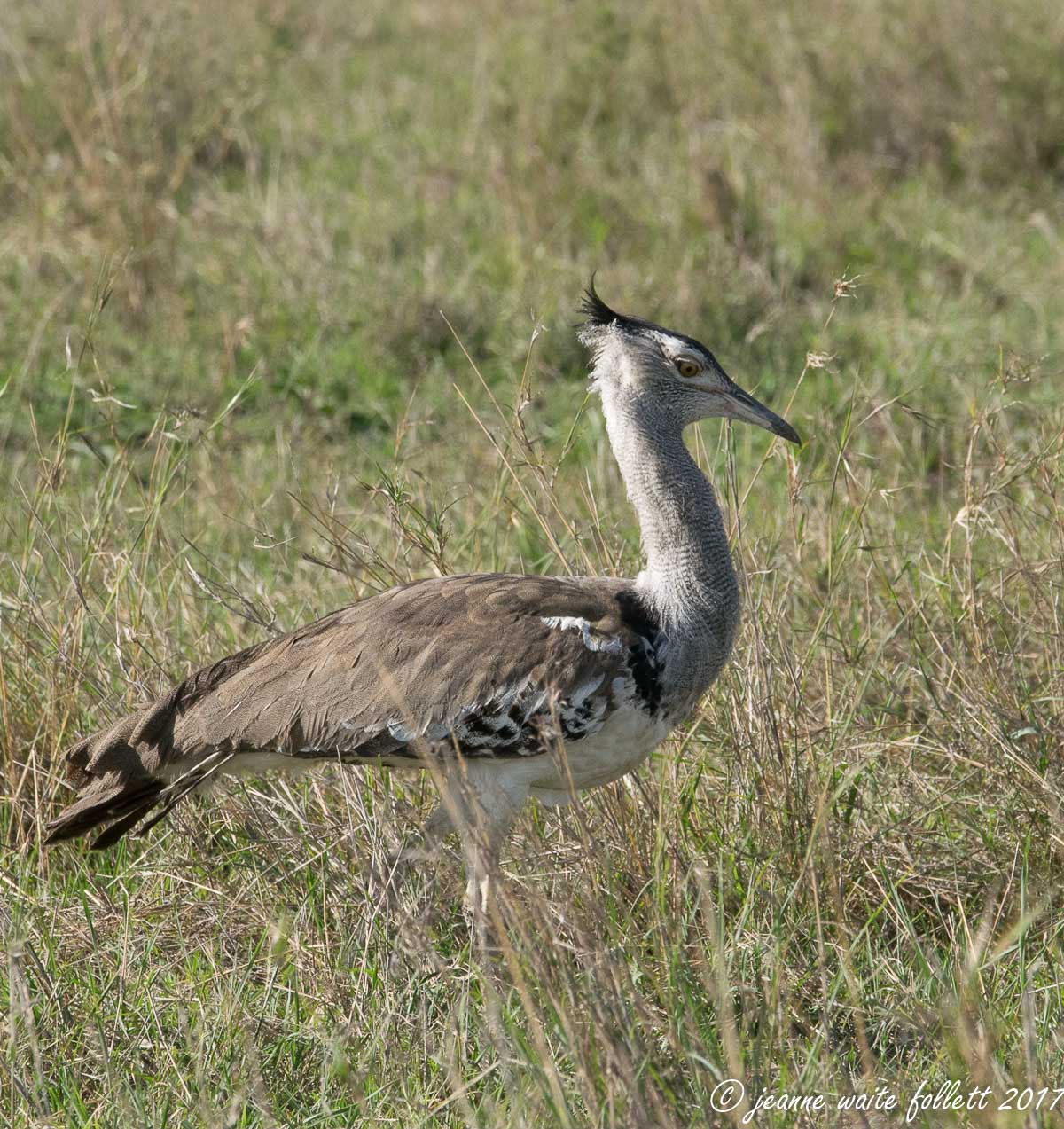 They are arguably the heaviest bird capable of flight, with an exceptional male found to weigh 44 lbs.  The largest stand almost four feet high, with a wingspan up to nine feet. 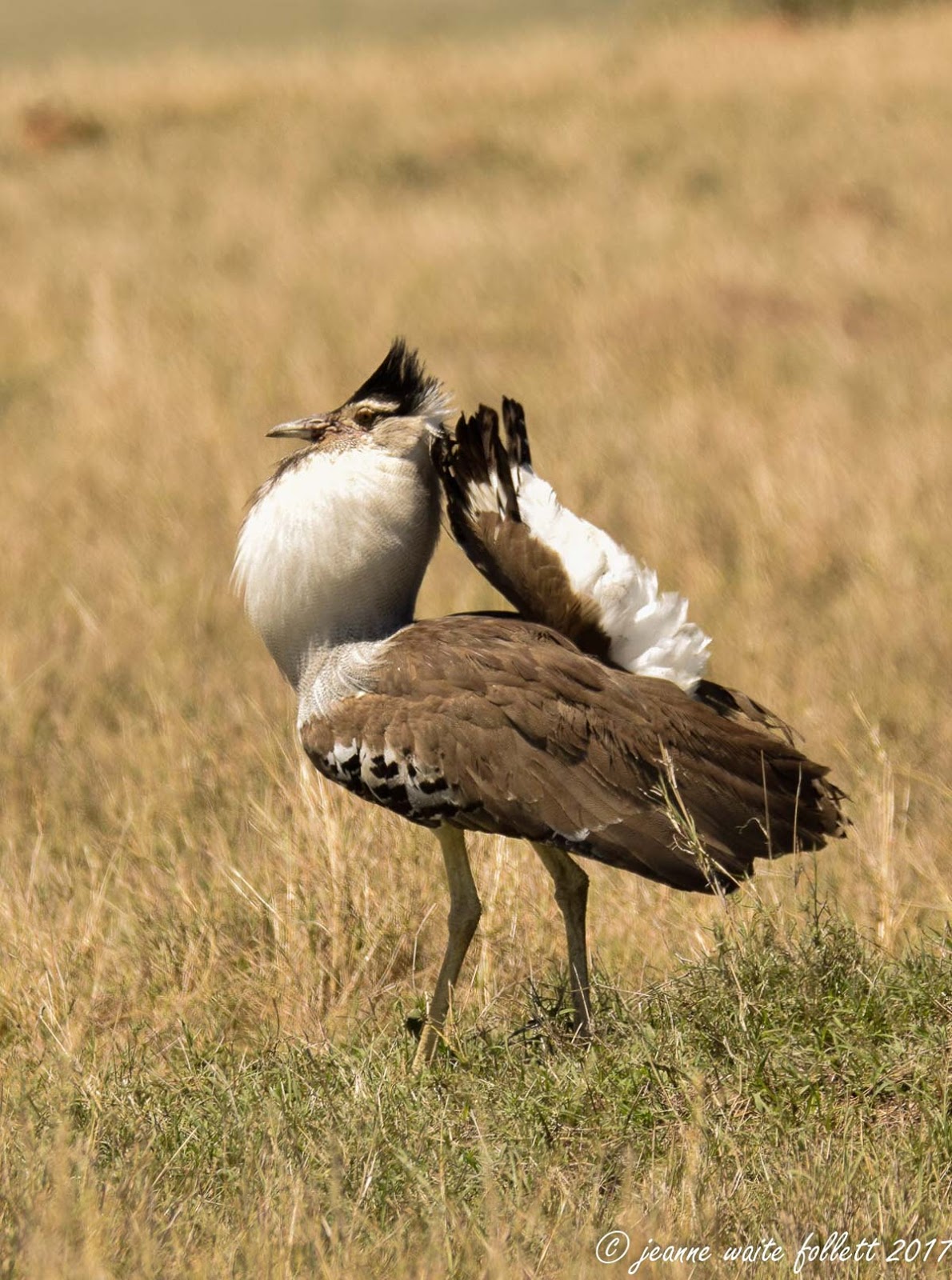 We drive to what I think is the prettiest part of the Mara, the place where the giraffes hang out.   It’s a gorgeous morning when we come upon two giraffes standing side by side, just as peaceful and pastoral as you’d imagine.

One of them stretches its head way up high, and swings it in a long graceful arc like a ballet in slow motion and….bashes its horns into the other giraffe’s neck. 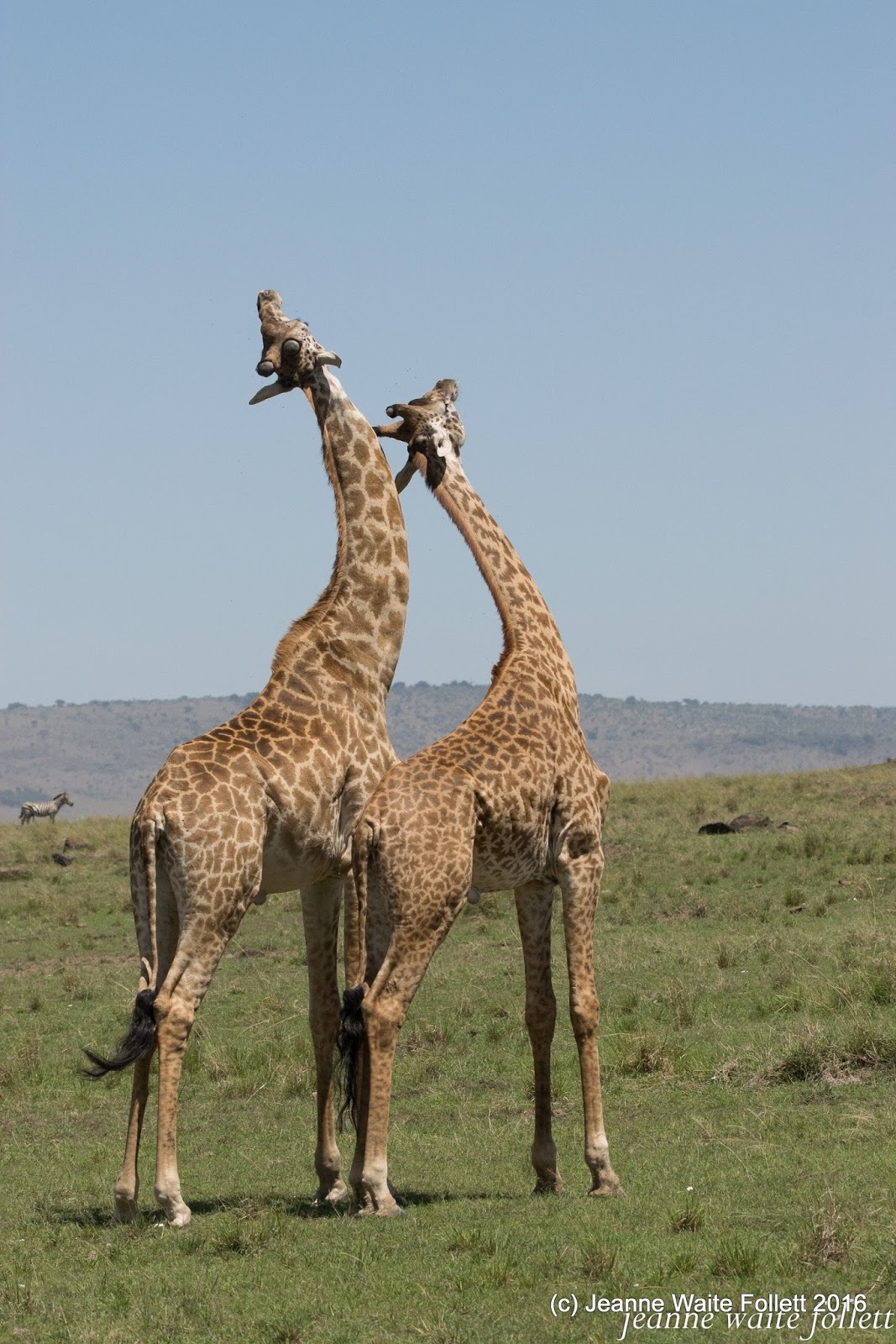 What the heck?   What’s going on here?   Do we have a father teaching his son how to fight? 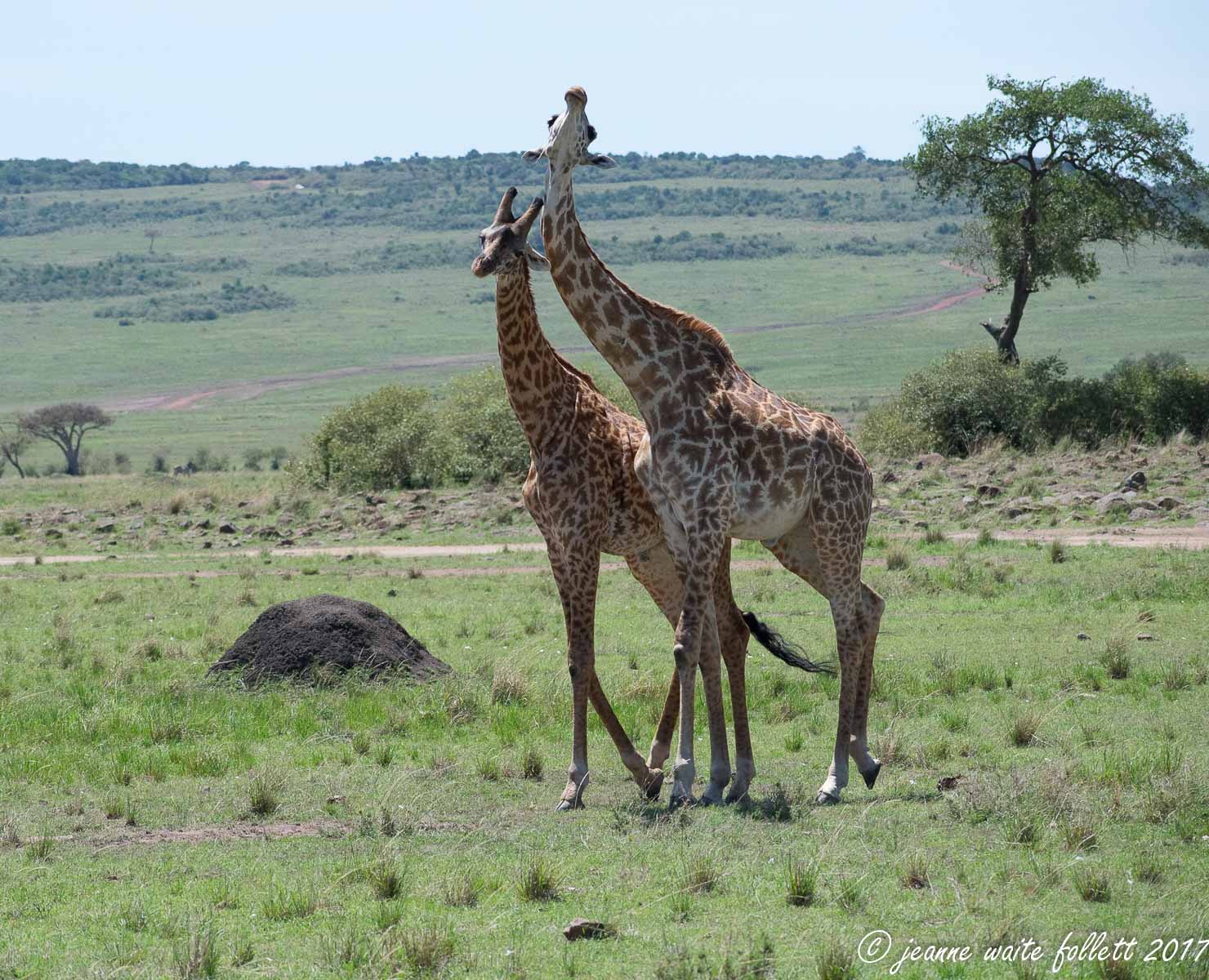 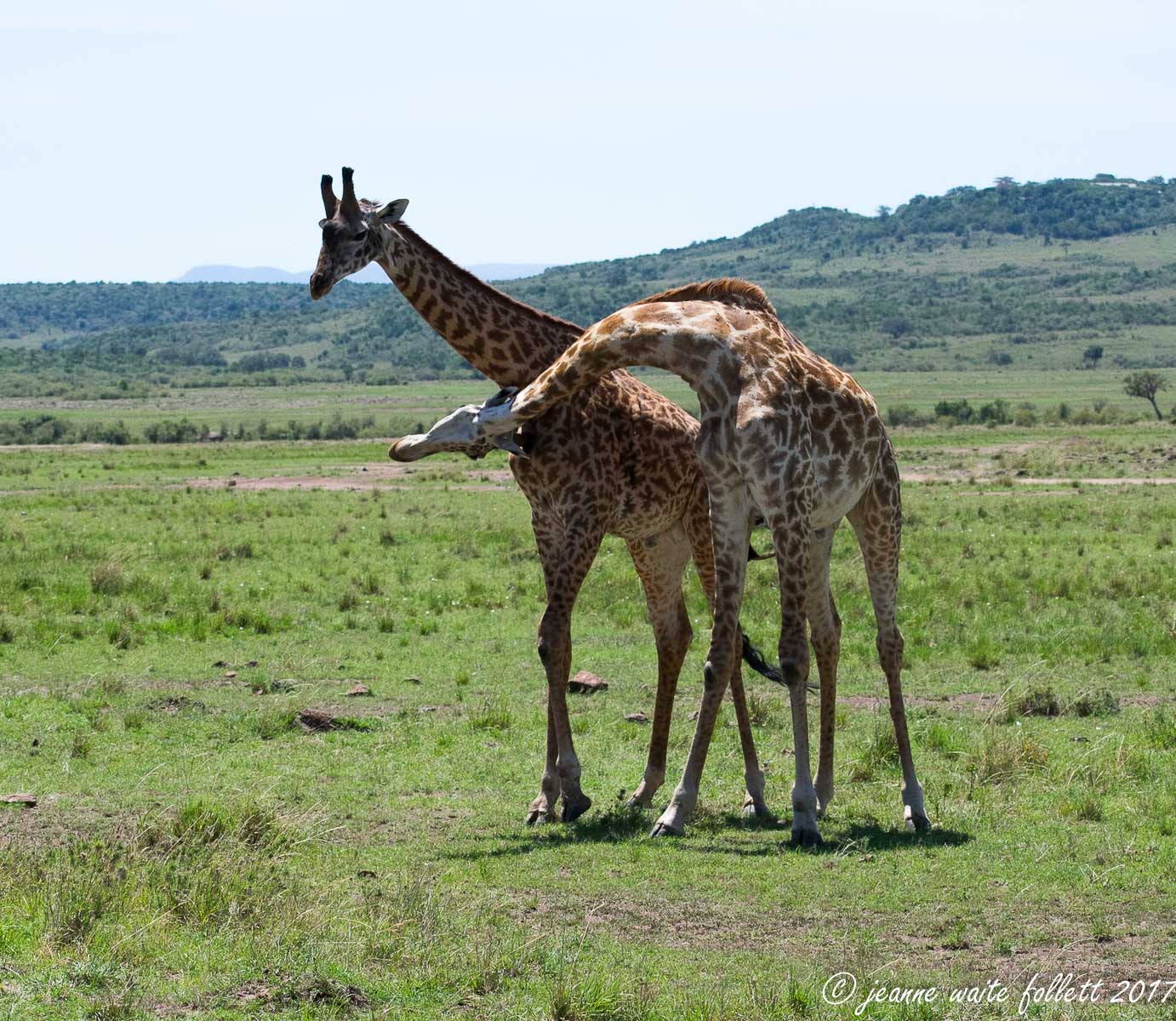 No, what we have is a sparring battle between two male giraffes. 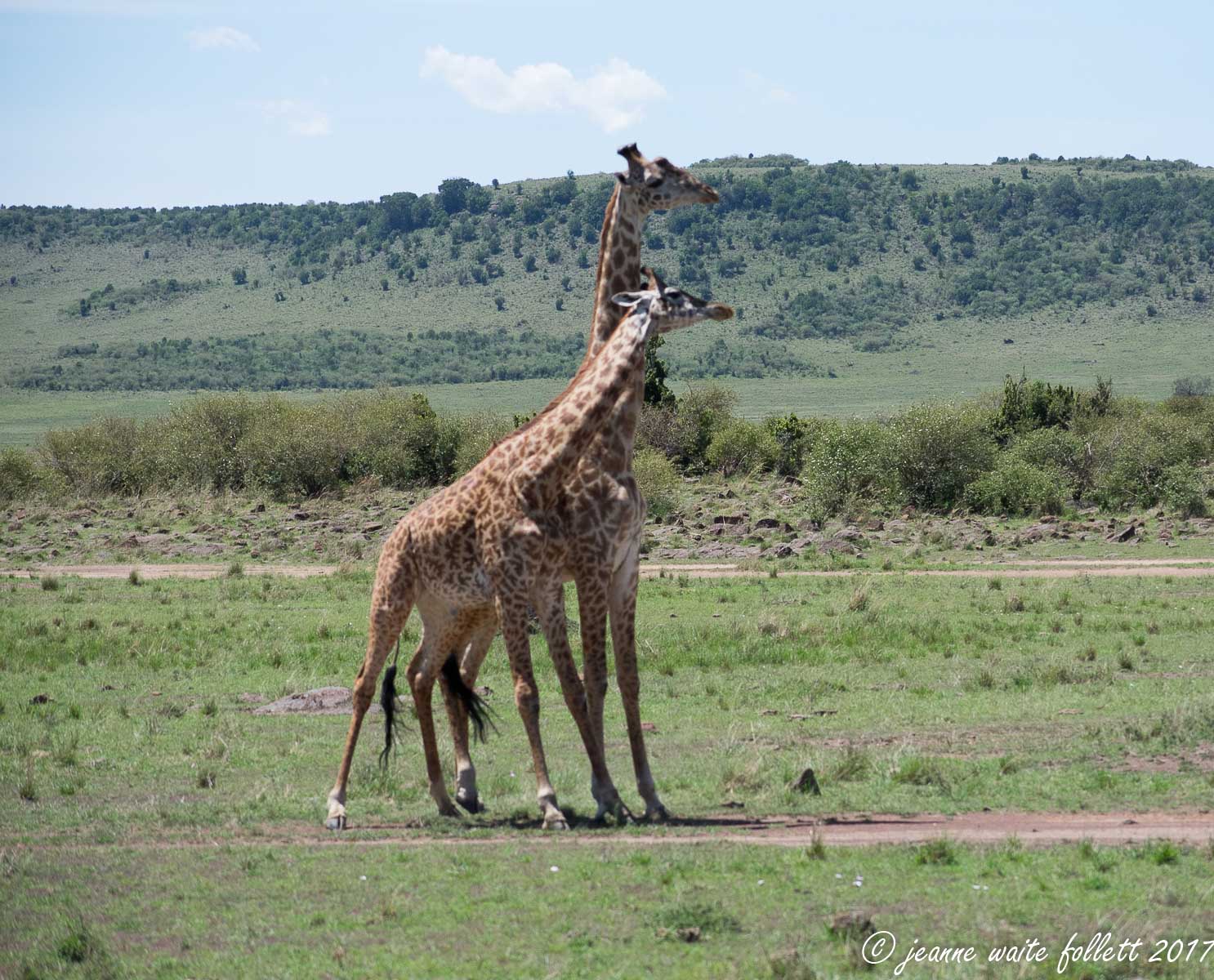 Blow after blow, feint after feint, horns and heads and necks collide, sometimes buckling the legs of the one hit. 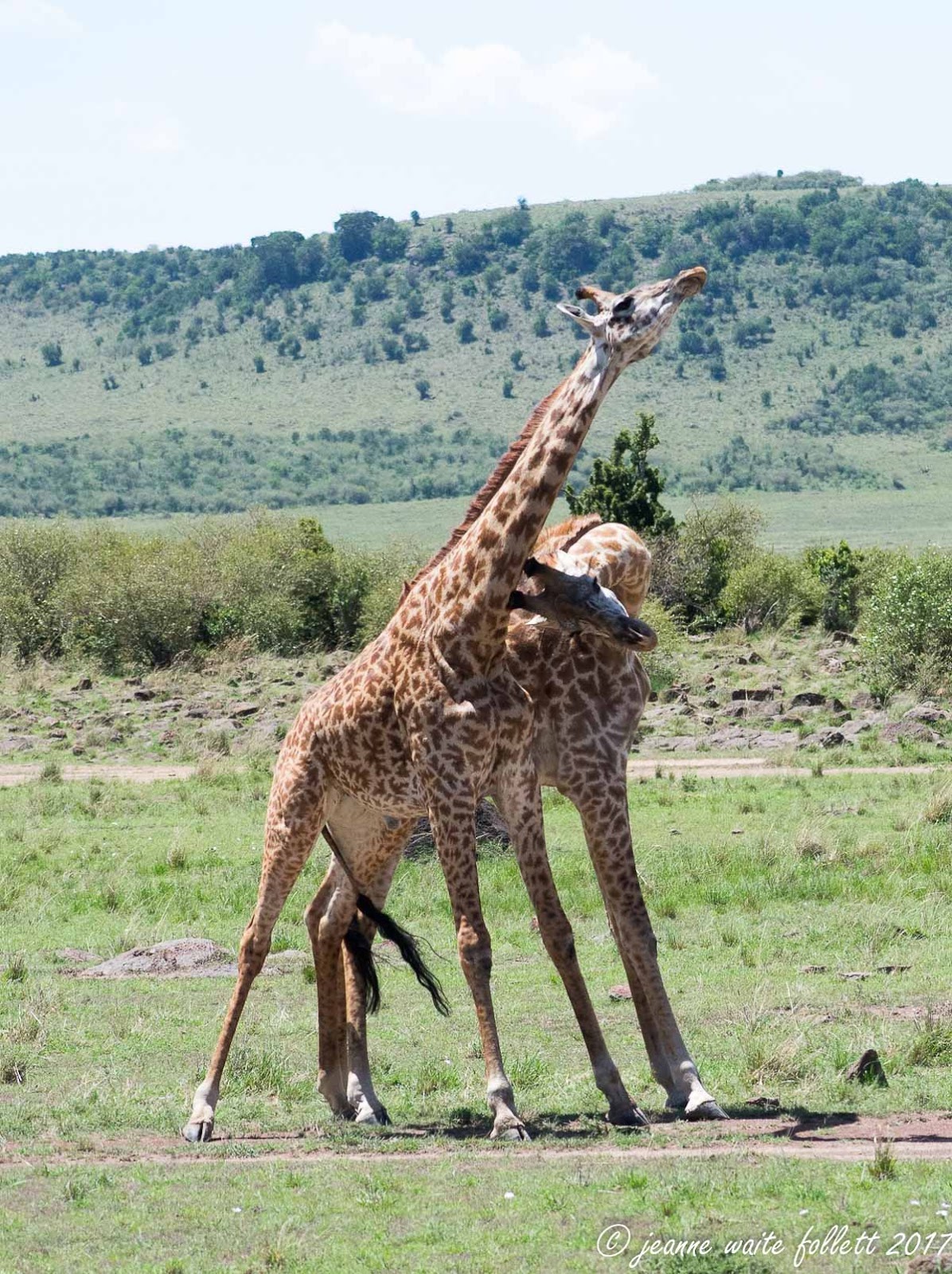 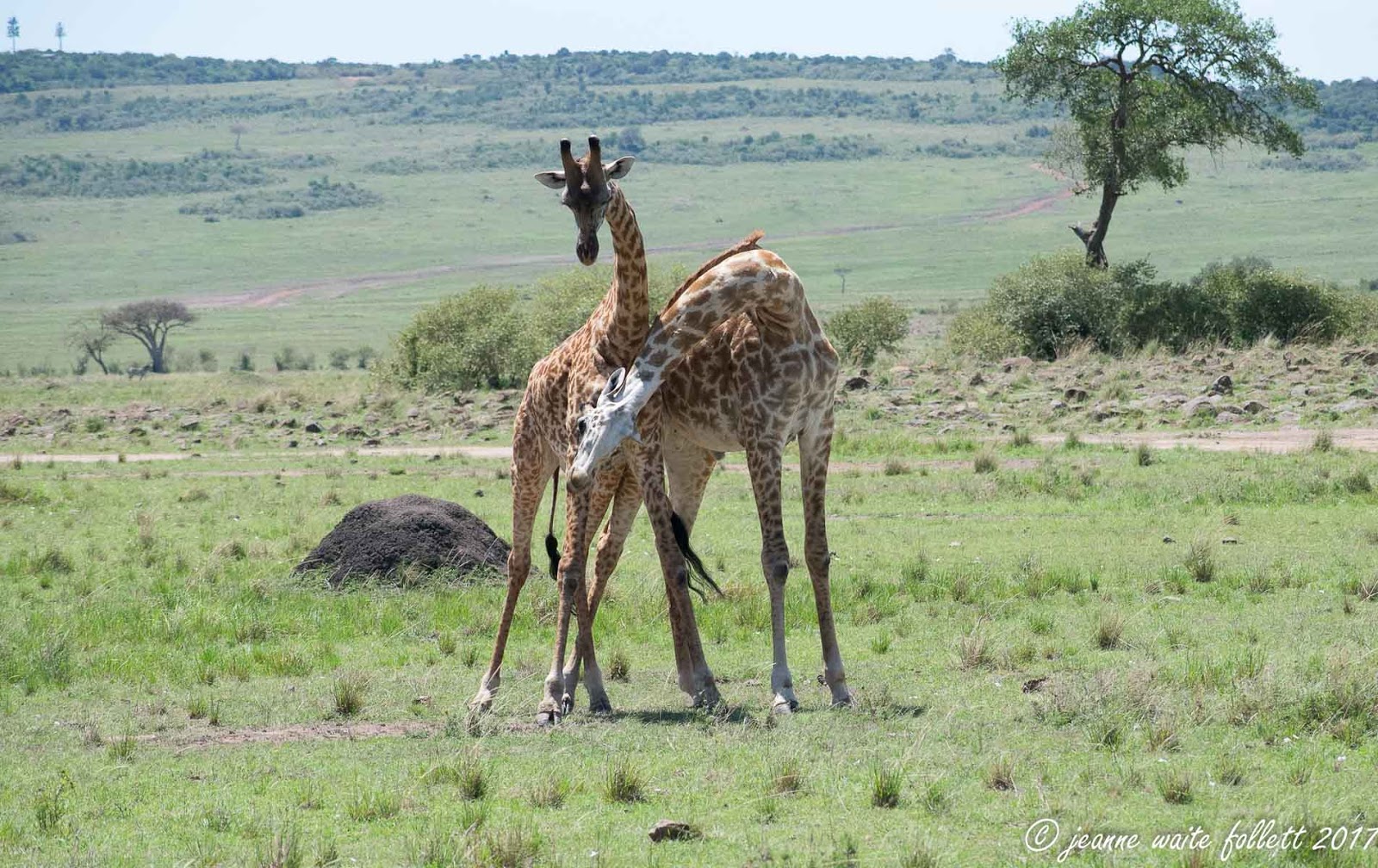 We watch spellbound for a half hour.   Finally, we leave.   These two could go on all day, pausing only when one knocks the other out. 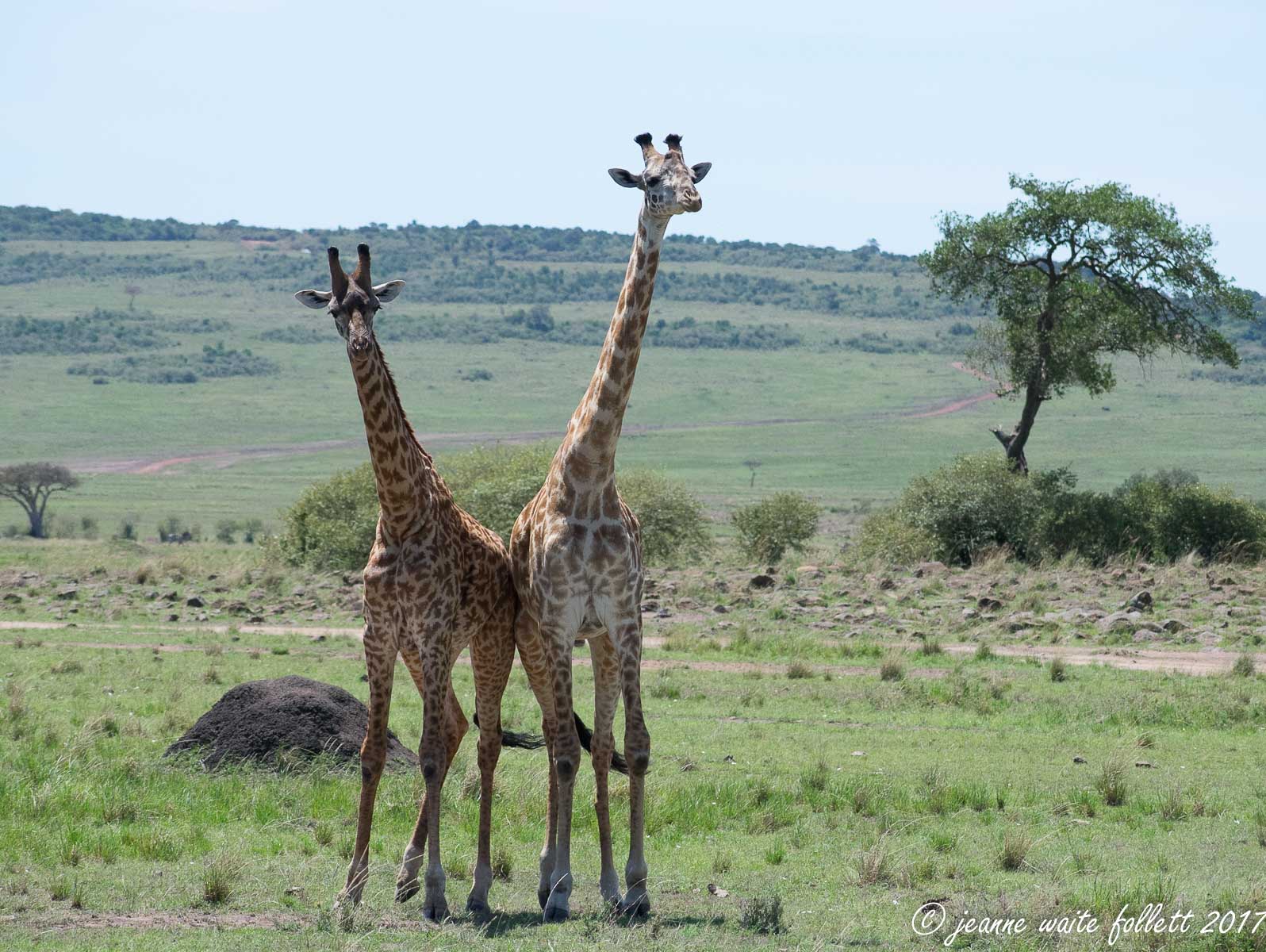 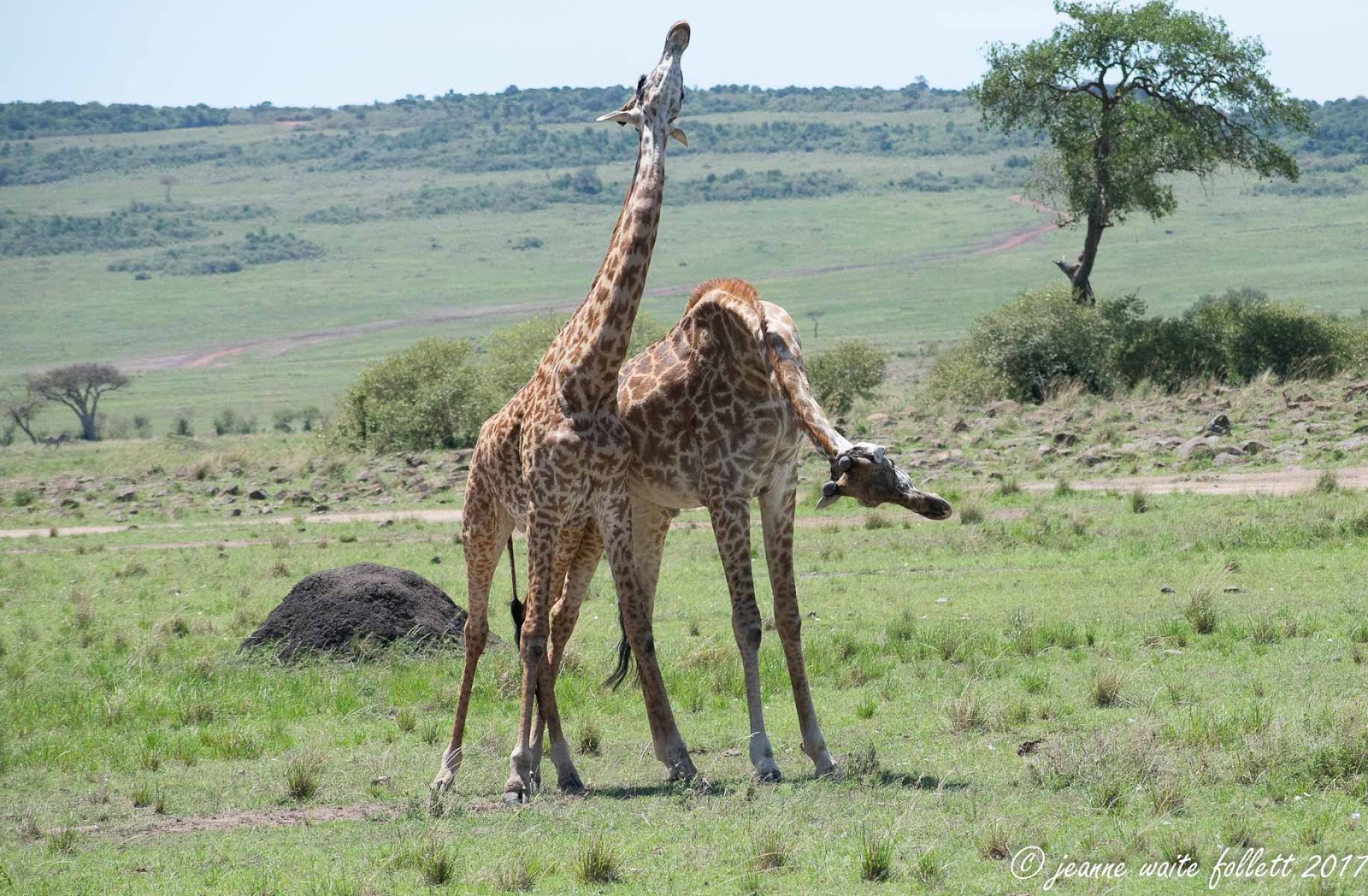 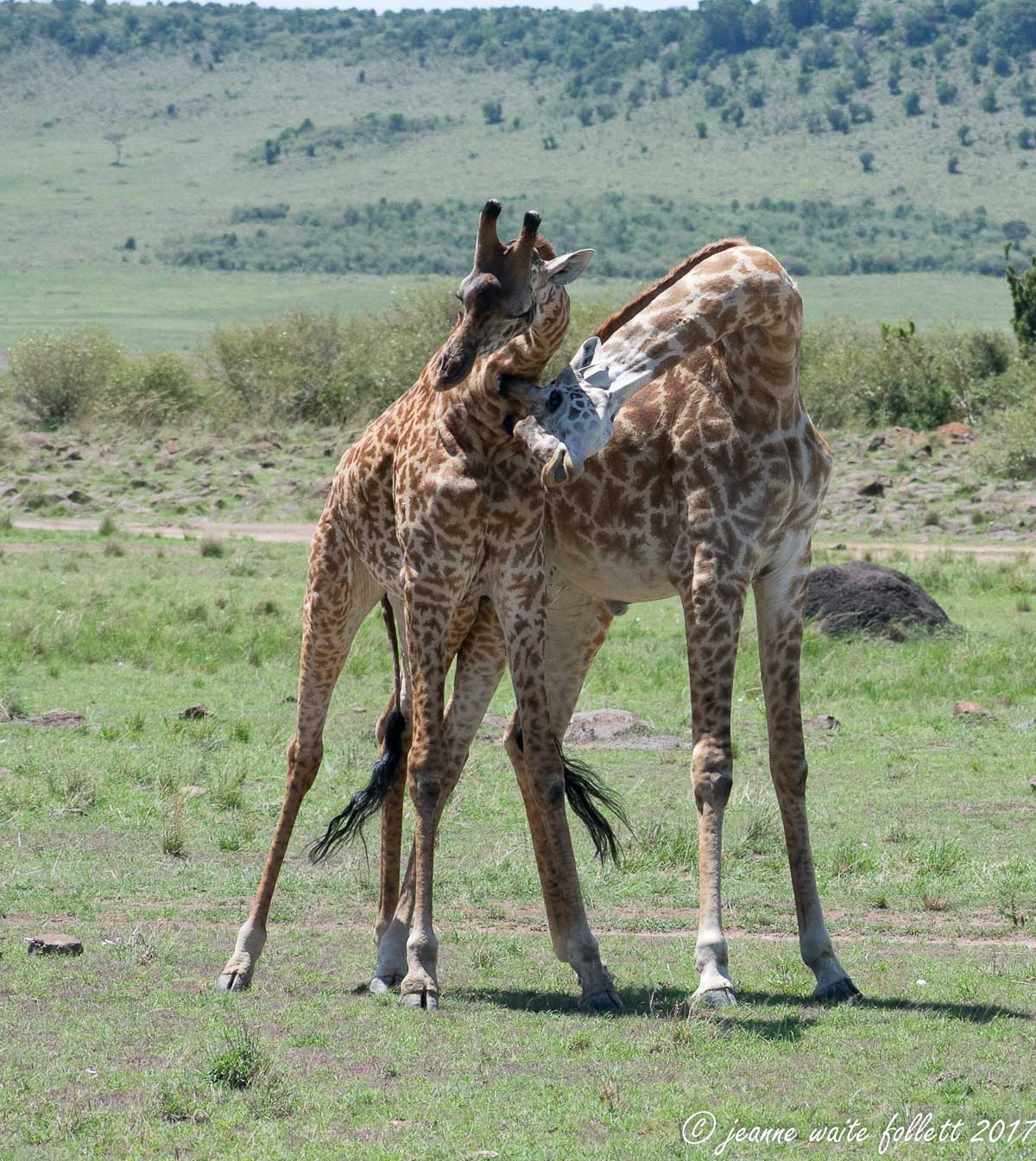 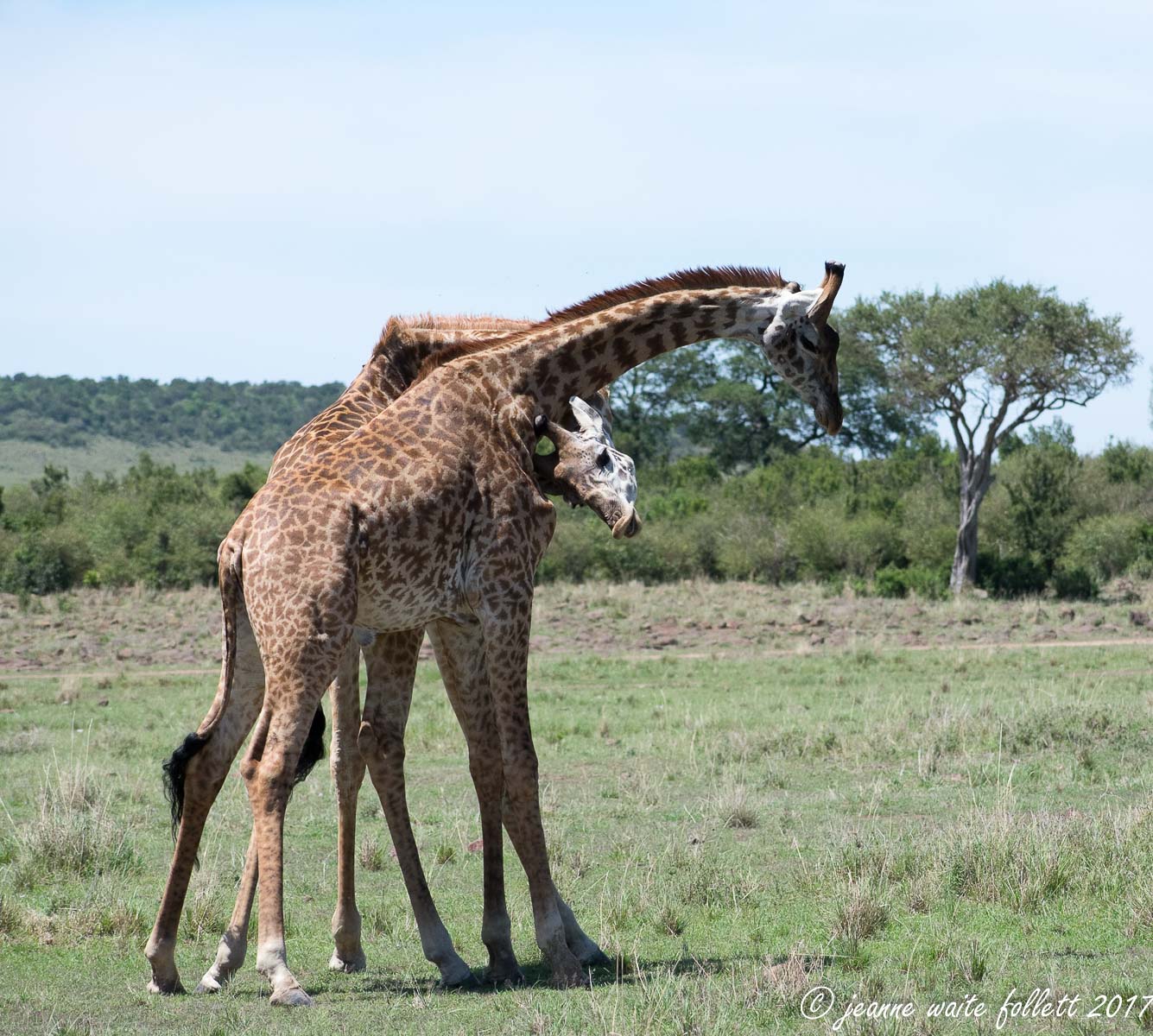 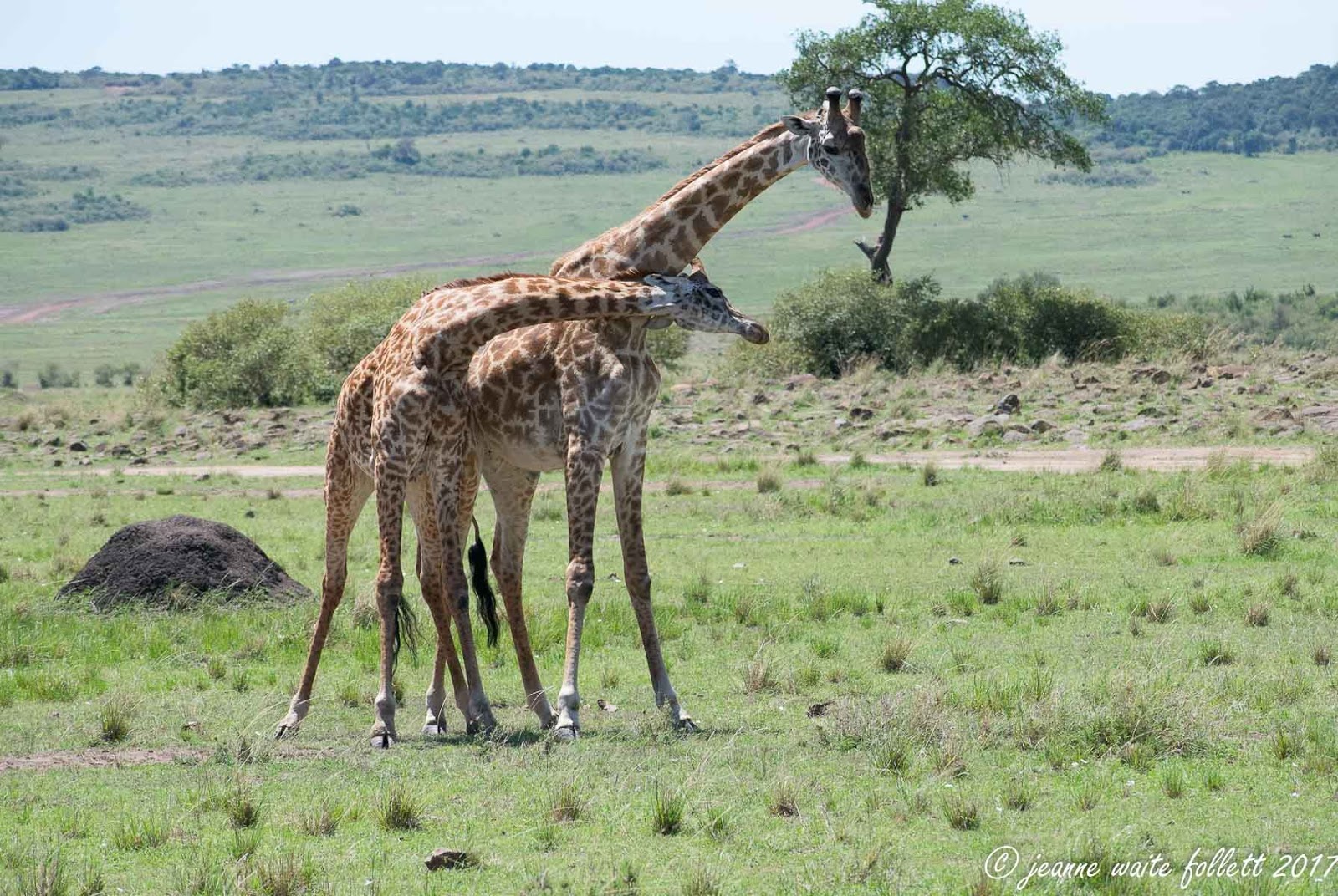 TURN DOWN YOUR SOUND!   Lots of wind noise.

Later in the morning as we near camp, a huge giraffe stands right beside the dirt road where it dips into a dry creek bed, circles around some big rocks, and rises to the plain on the other side.  I am somewhat hesitant to get that close to this giraffe after what we’d witnessed. 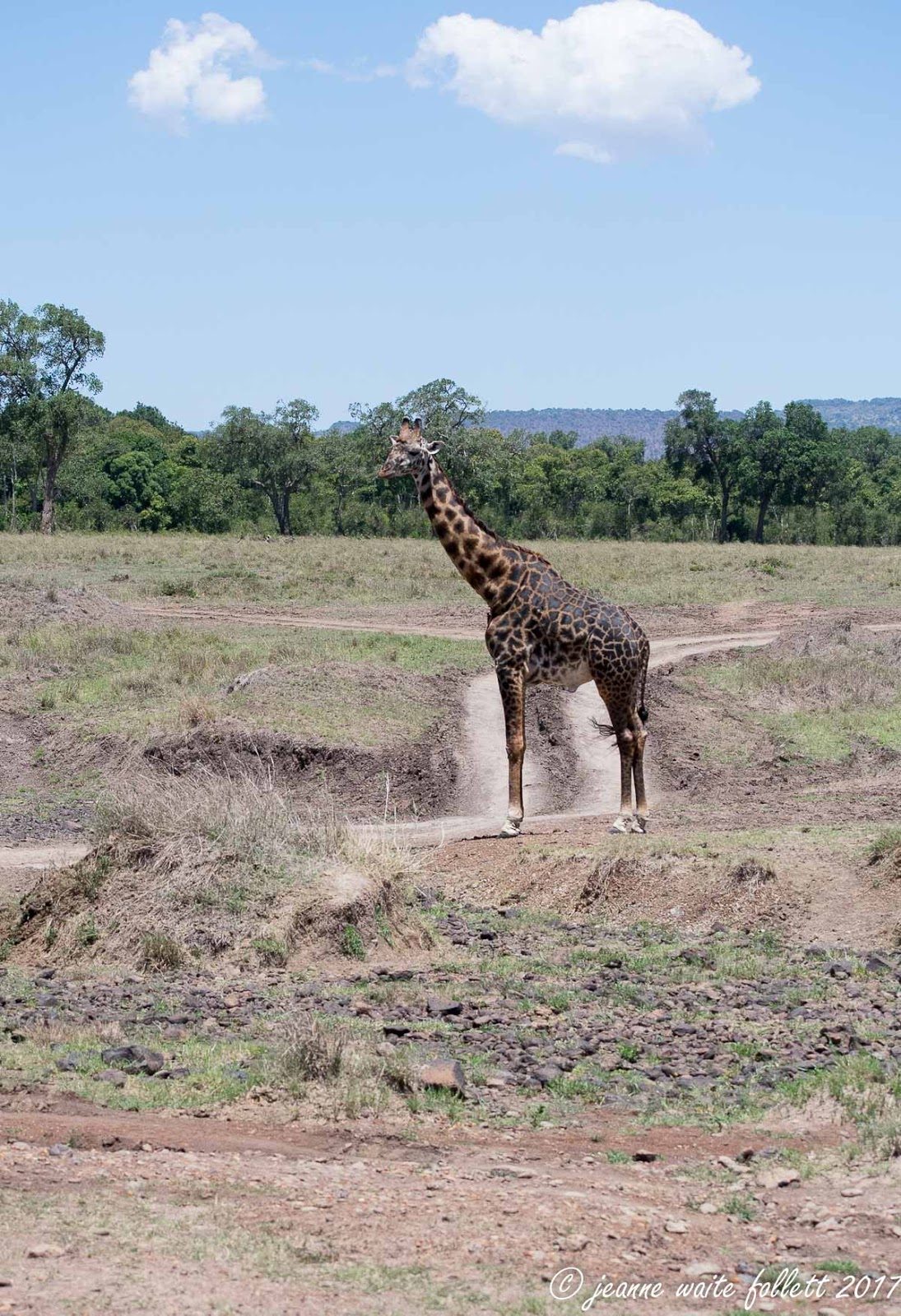 Solomon tells us this is the oldest giraffe around, 20 years old. 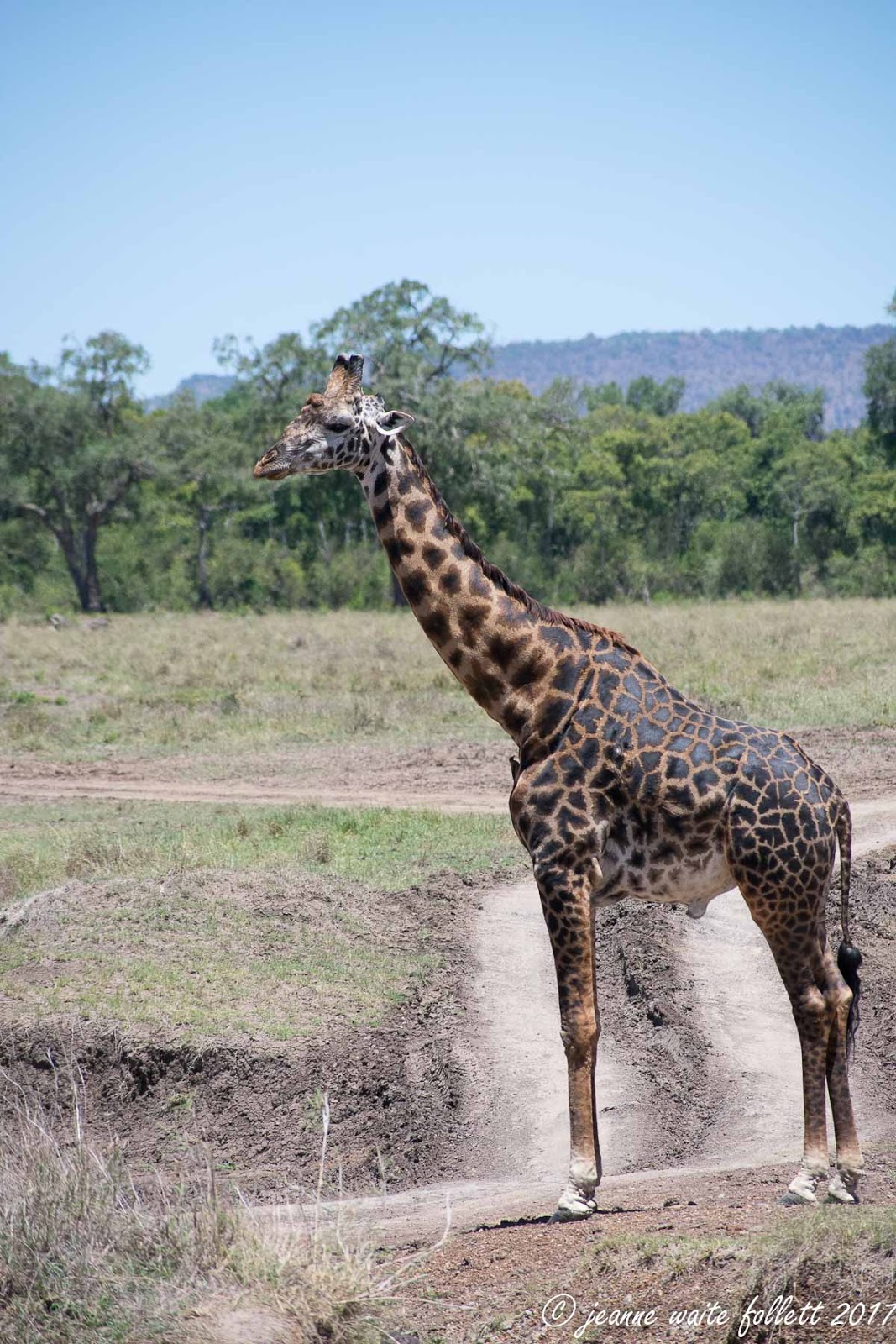 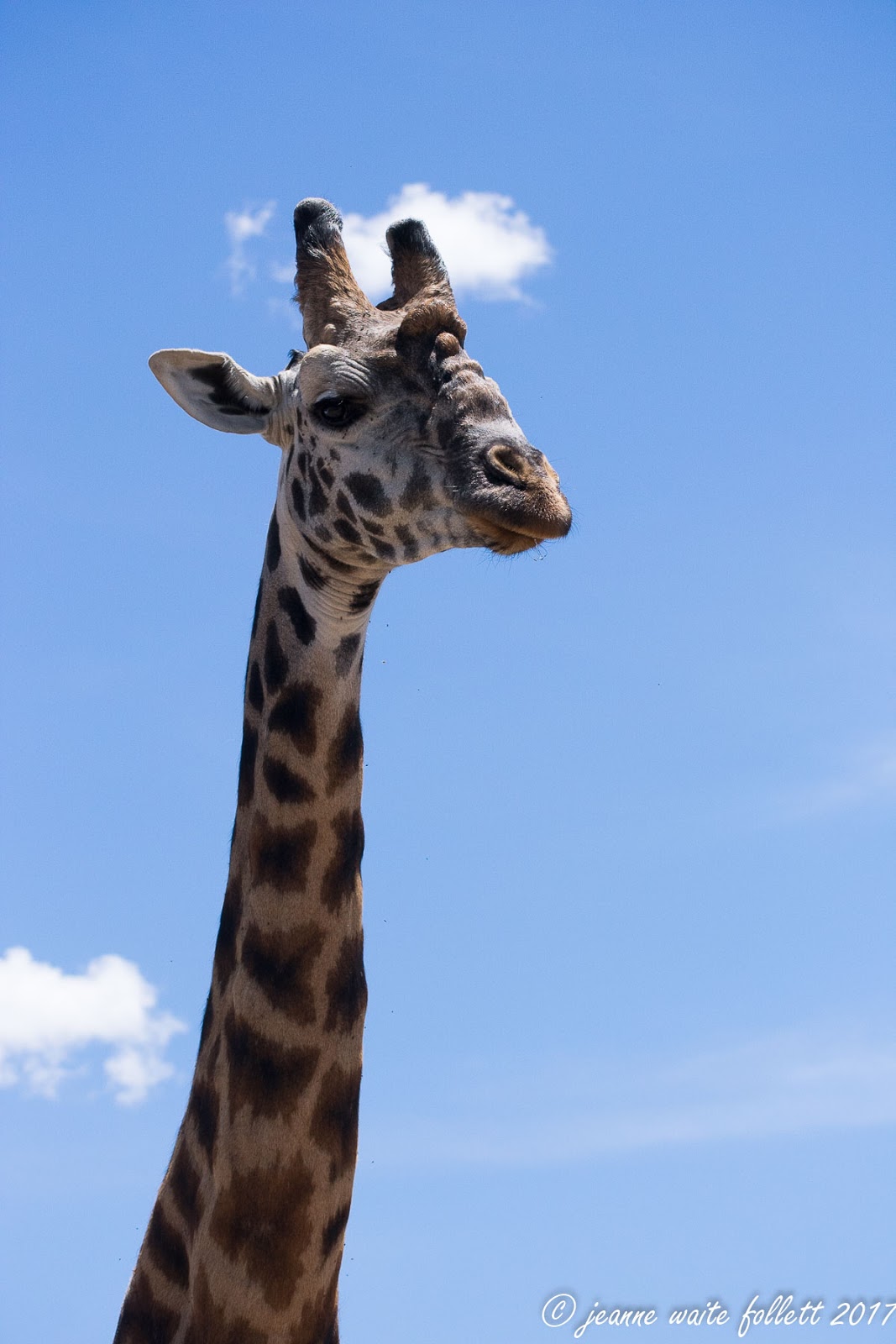 It doesn’t move a muscle as we stop right in front and take photos. 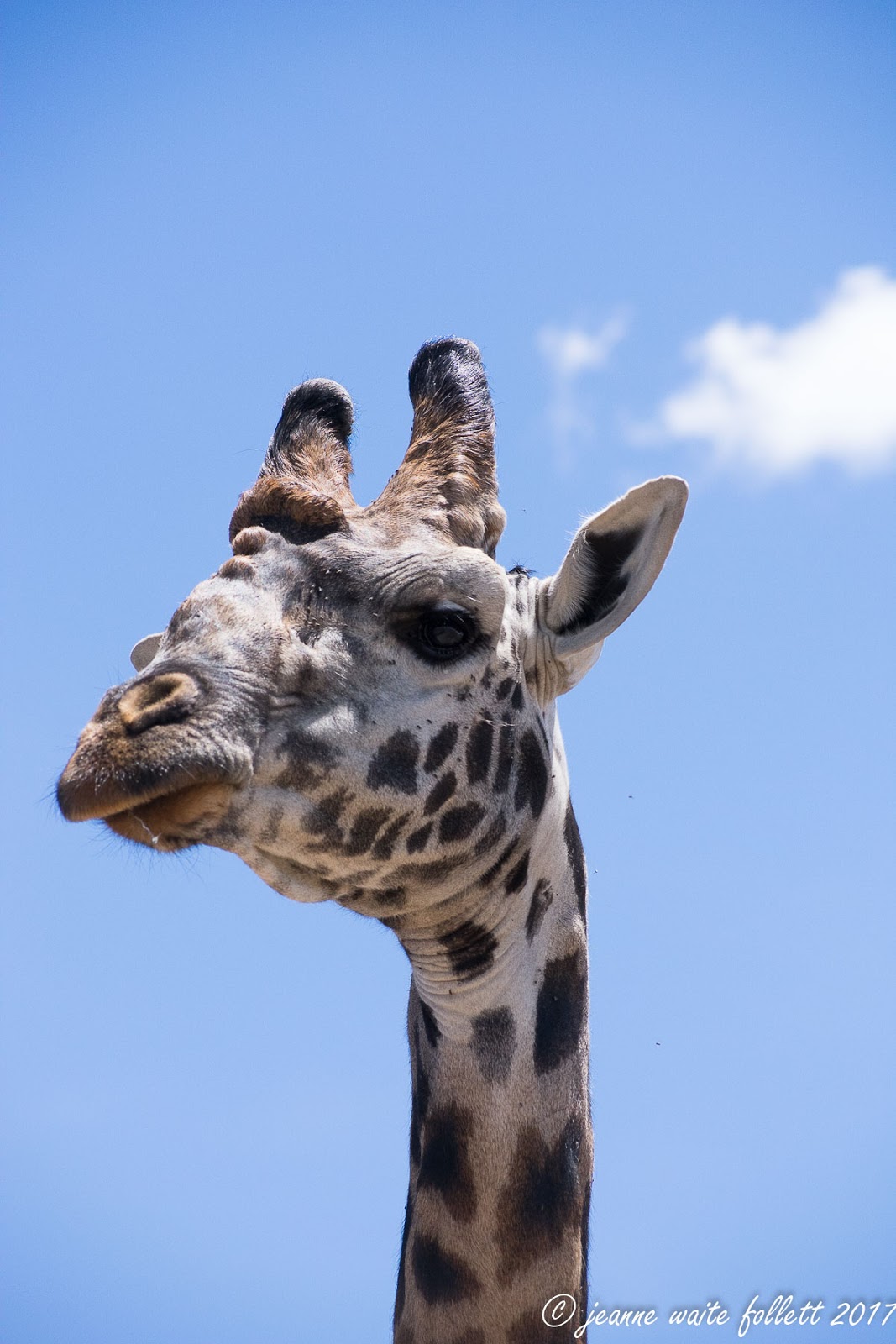 He’s a perfect gentleman about it, in fact.

Then we and he go our separate ways. 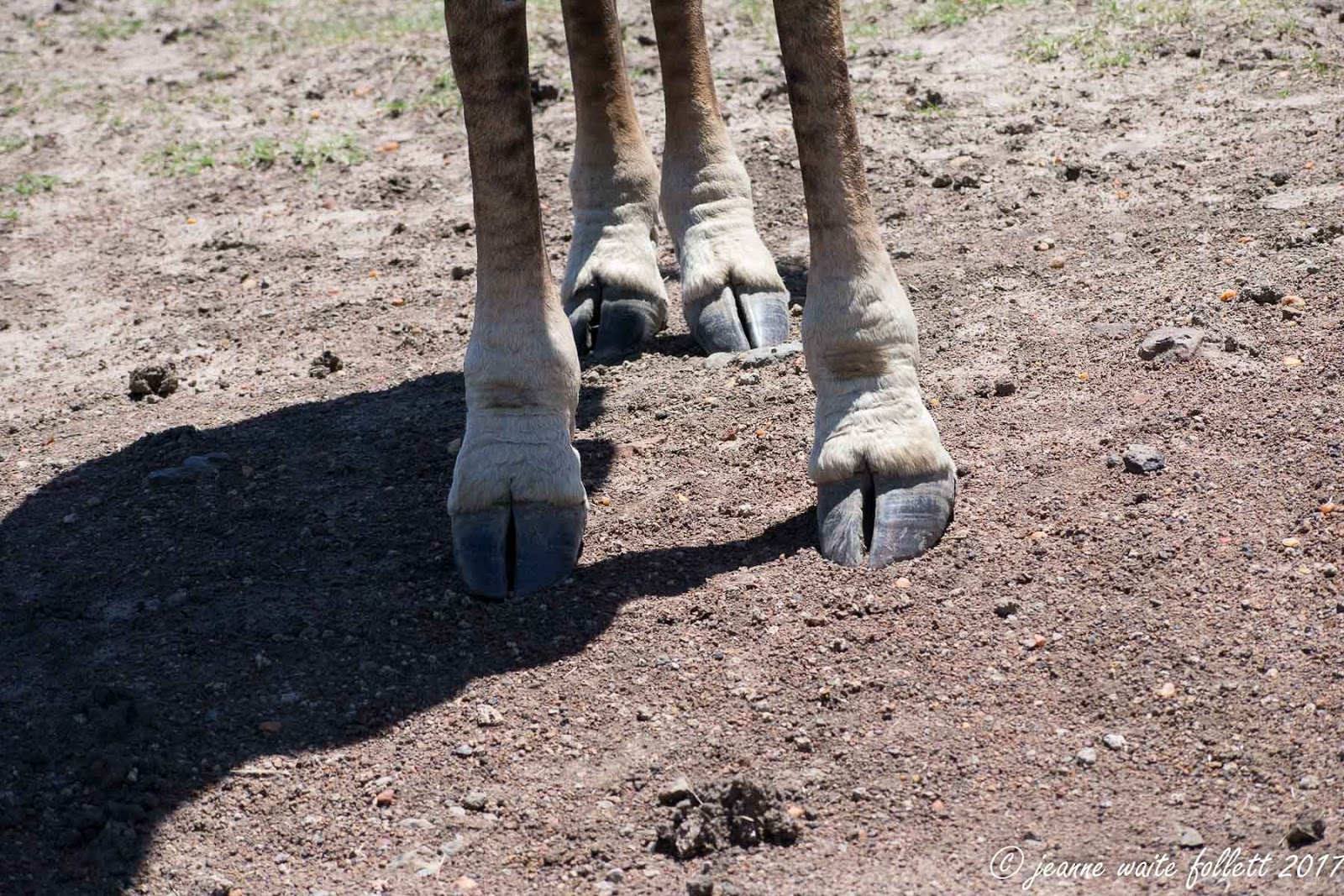 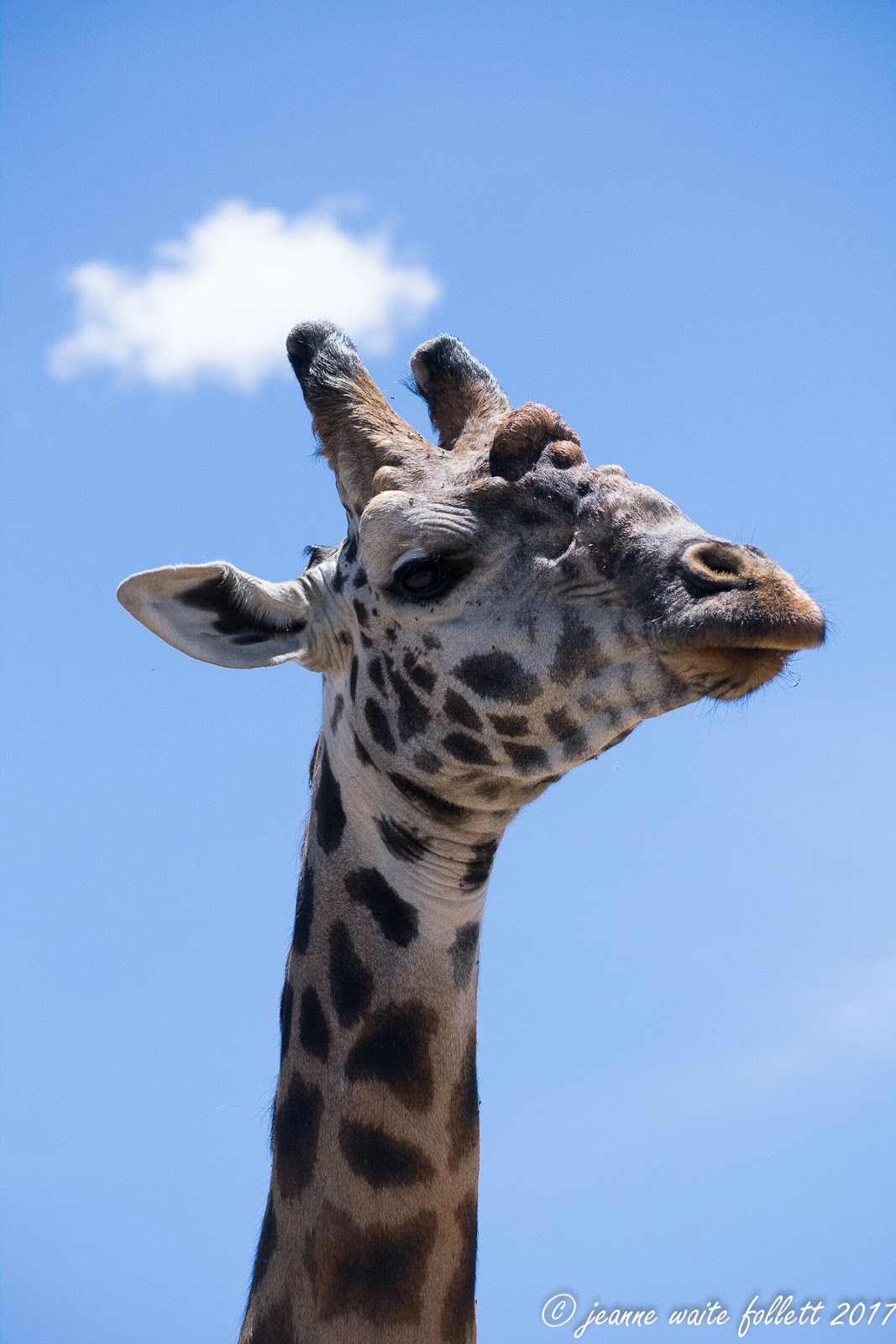 After looking at all these giraffe photos,you might get the idea hat giraffes have spindly legs.   Here's a photo that will prove otherwise: 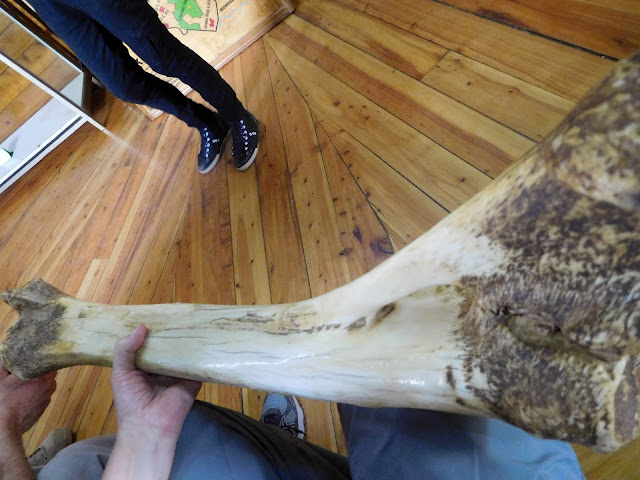 This is the tibia (lower leg bone) of a giraffe.   The knee is to the right.   This bone is HEAVY!

The roads in the Mara were bumpy!!!   I often held my camera on my lap to protect it from the jarring impacts, at least until it started leaving bruises on my thighs.

Somehow one of the camera settings called "effects" got turned on and I took these photos until I caught it. 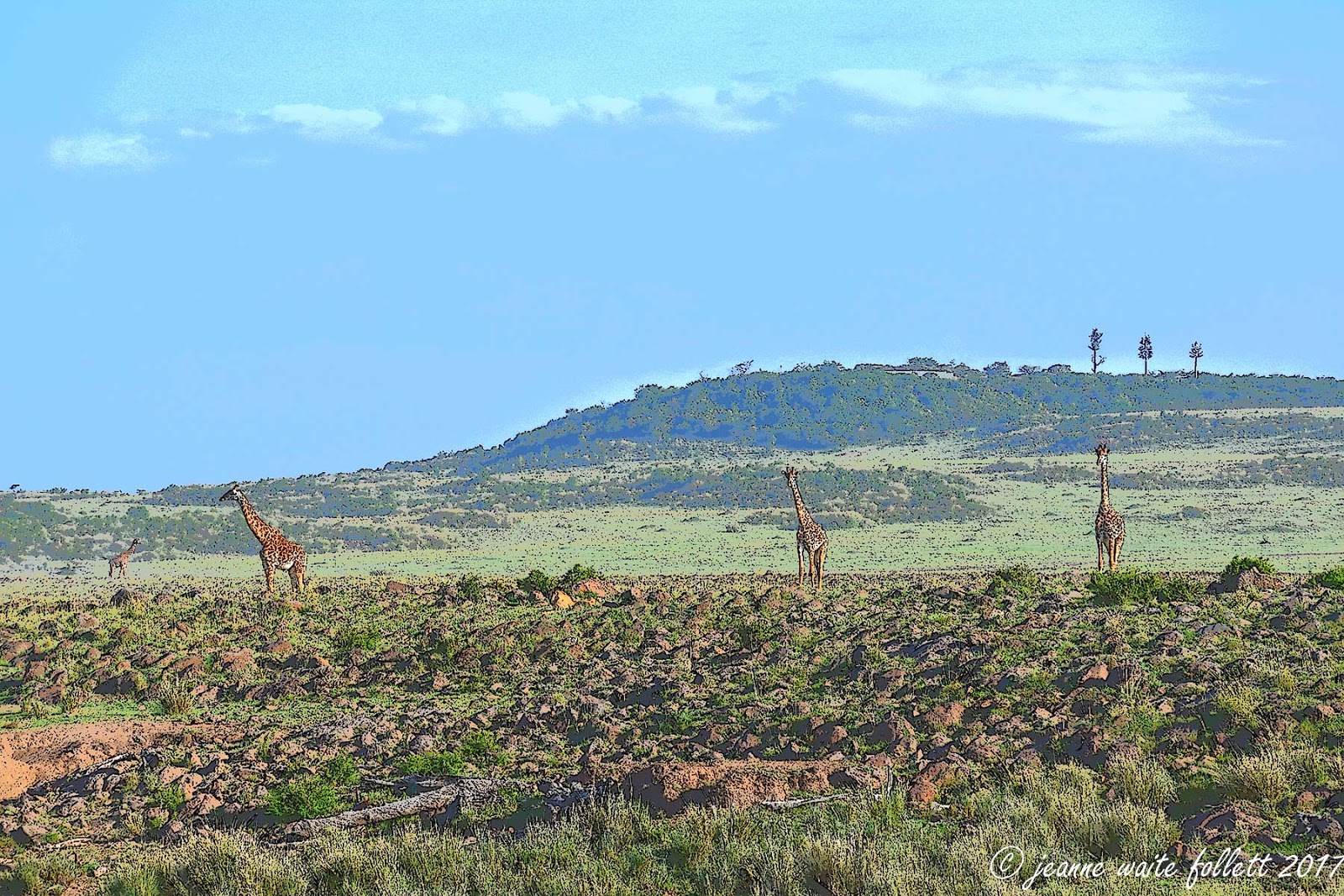 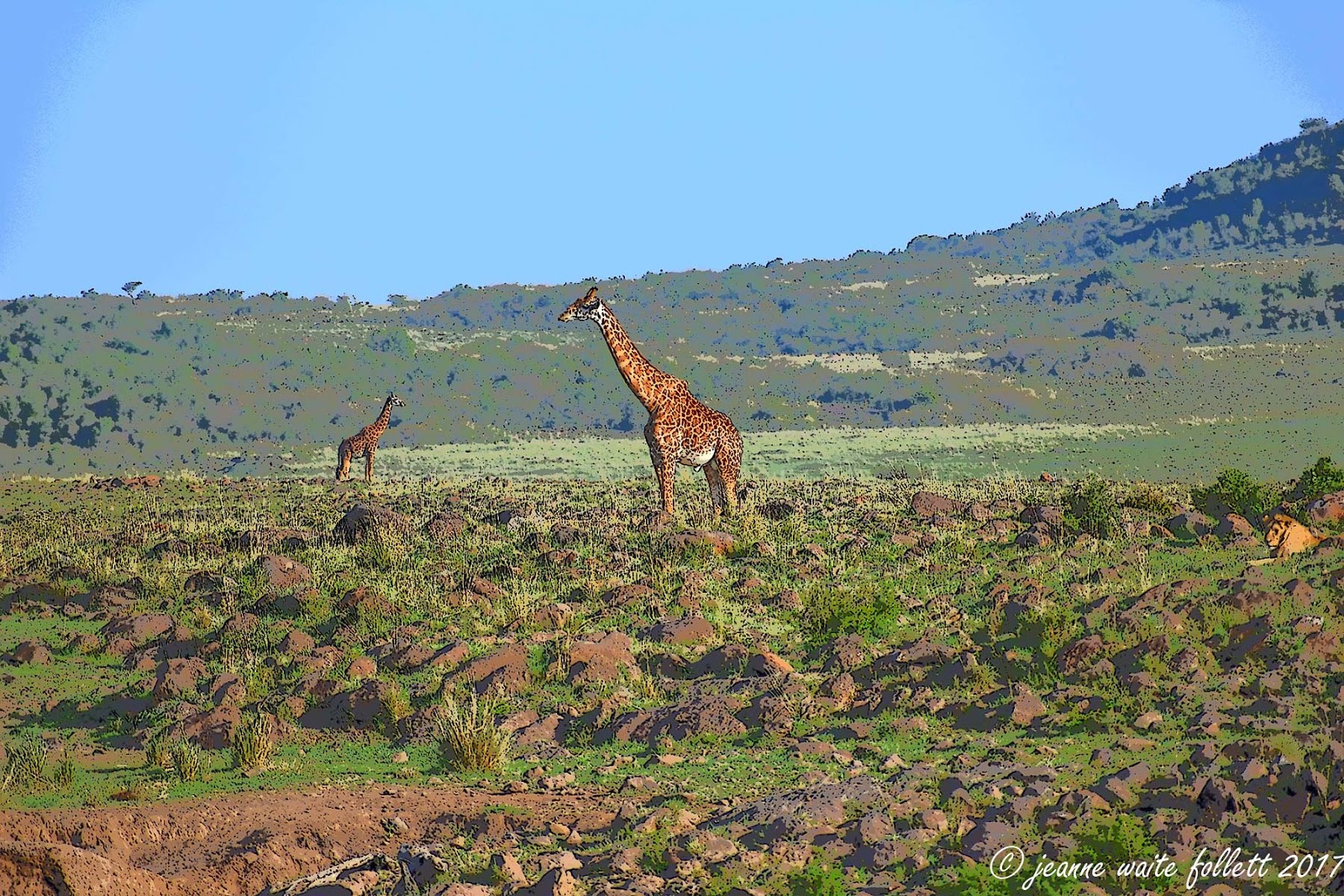 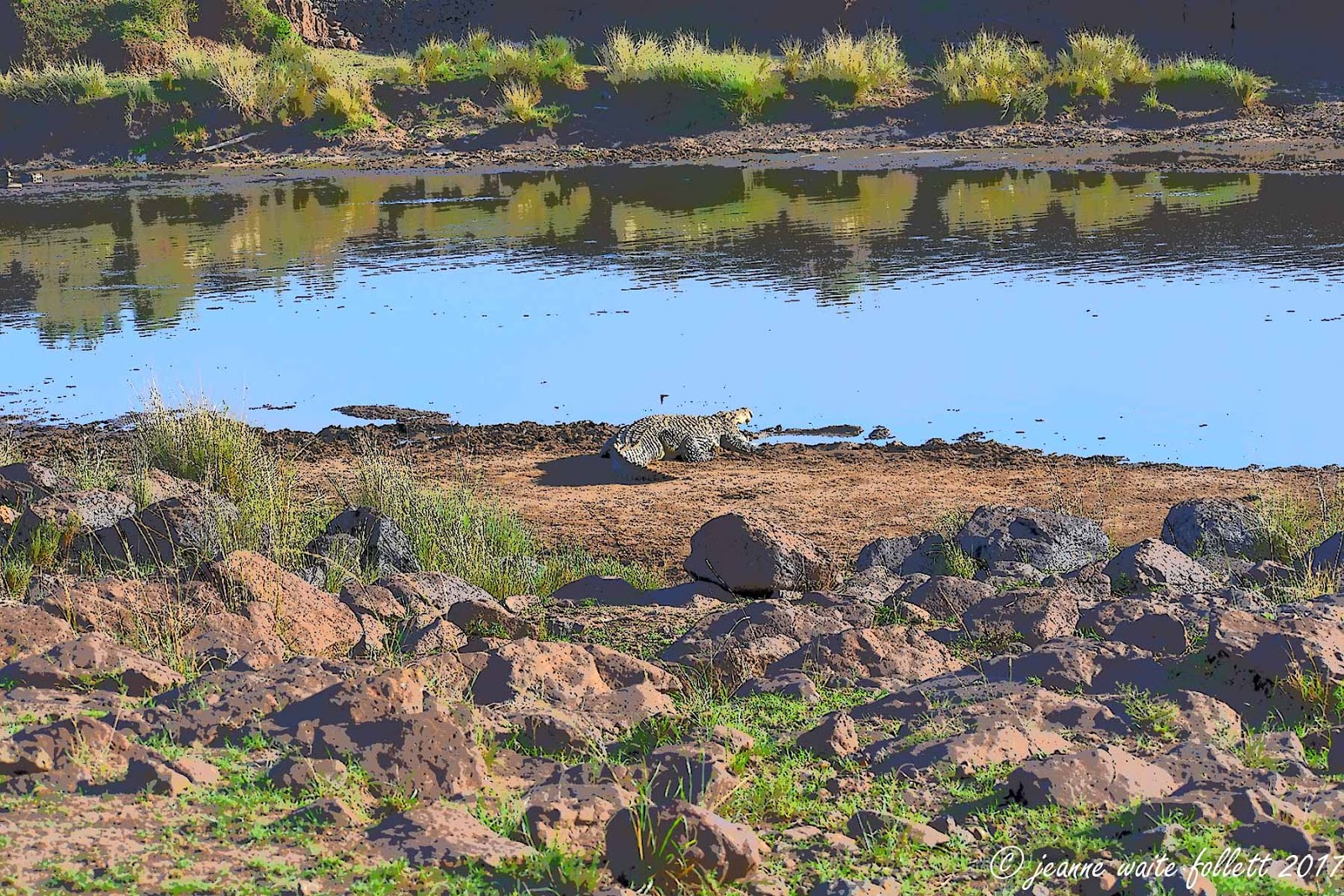