The Kenya Journals, Ch. 17, Sticks and Stones on the Masai Mara

Chapter Seventeen
Sticks and Stones on the Masai Mara

Those who wish to pet and baby wild animals 'love' them. But those who respect their natures and wish to let them live normal lives, love them more. -  Edwin Way Teale

I'm in my tent at Governor's Camp, getting ready for  our first afternoon safari drive, when I hear some men on the pathway behind my tent.   I think I hear one of them say, "Hippo in camp!"    Wow.   That's dangerous.  I wouldn't want to meet up with a hippo anywhere, anytime.

Hippos are considered the most dangerous animal in Africa, killing about 300 people a year.   They rank right up there with Cape buffalo.

Dinner is served at 8 P.M. at Governor’s Camp, just as it was at Mara Intrepids.   I suppose that’s to give guests time to clean up from their dusty safari drives.   I got a kick out of the Intrepids camp brochure in our tent that noted dinner dress was “casual formal.”

Casual formal to a safari goer is not unzipping the legs from your convertible safari pants.   Not a one of us dressed casual formal, though I saw some others in camp that did.

Because it is completely dark just before 8 o’clock, I follow the orientation instructions and wave a flashlight out the front flap of the tent.   Almost immediately, I see a light bobbing towards me, followed by a security person who is to escort me to the dining room while keeping voracious wild animals from attacking me.   He is armed, too.   With a short stick.


I wonder how effective the stick would be against a hippo or a lion or an elephant.

What would they do with it?   Throw it and some stones and hurt the beast’s feelings?

My companions assure me the men have rifles.   I never once saw anyone with a rifle.  I did see rifle scabbards fastened to the back of the safari vehicles, but whether or not they contained a rifle, I don’t know.

Though the animals on the Mara are habituated to safari vehicles, one could always come across a big cat, an elephant, or a Cape buffalo that was having a bad day.

Dinner is in a screened dining room, rather than on the adjacent lawn where breakfast and lunch are taken.   I think about this for a while and figure it’s because there is no lighting for a fresco dining.   But, the only light in the dining room comes from candles and very dim overhead lights, so I change my mind and decide the dining room is to add a bit of classy ambiance to the experience.


Then a hippo walks through the yard, right where we had eaten lunch.   No one else had heard someone say  "Hippo in camp" earlier as I had, so I feel somewhat vindicated.

The hippo is followed by men with flashlights and sticks, just making sure the hippo, which has climbed a steep bank up from the river, goes directly onto the savannah to graze and doesn't decide to take a tour through the dining hall for the salad.

Halfway through dinner, a genet runs across the lawn and into the bushes closest to the buffet counters.  It pauses, and then runs into the grill/serving area and disappears.

After dinner, we pick up our “armed” escorts and walk back to our tents as a group.

And there, on the patio of each tent is an oil-burning lantern, its soft amber light welcoming us home. 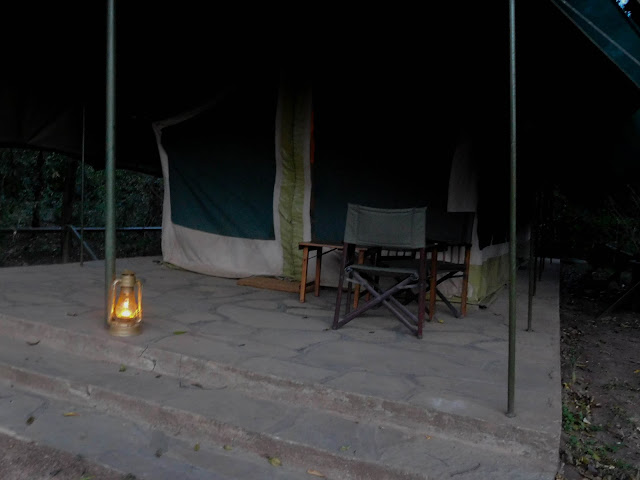 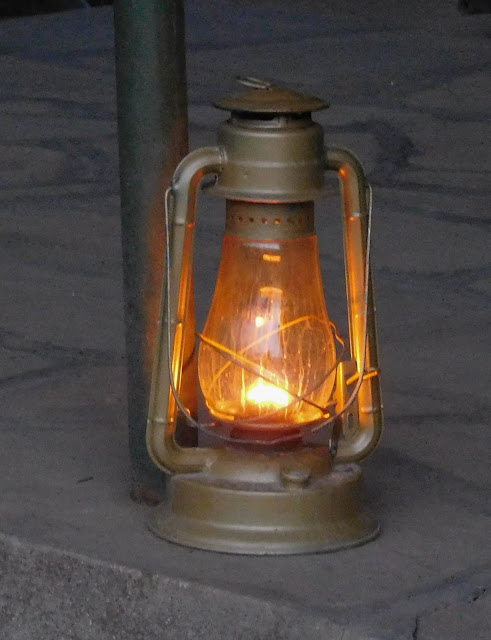 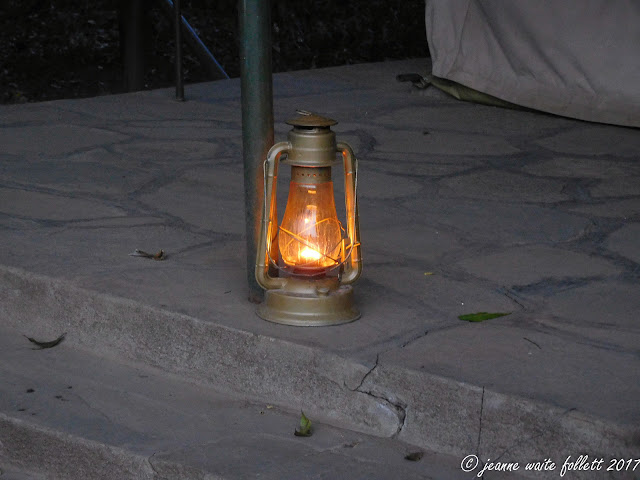 After finishing up some photo/computer stuff, I go to bed and lie there thinking about everything I’d seen that day.  I'm almost asleep when an ungodly loud bellow startles me awake.  I sit up and wait for more, but don’t hear anything and finally fall asleep.

I’m awakened again, this time by a voice on my patio and the sound of the door being unzipped.   Someone enters my tent!   One of the Masai warrior lamps on the opposite side of my bed turns on.

I hear the tent flap rustling, footsteps across the floor, and I peek out.

It’s Joseph, waking me at 5:45 for the morning safari drive and bringing me tea and cookies in bed.   Now, that is cool.   First time being served tea and cookies while I’m still in bed. 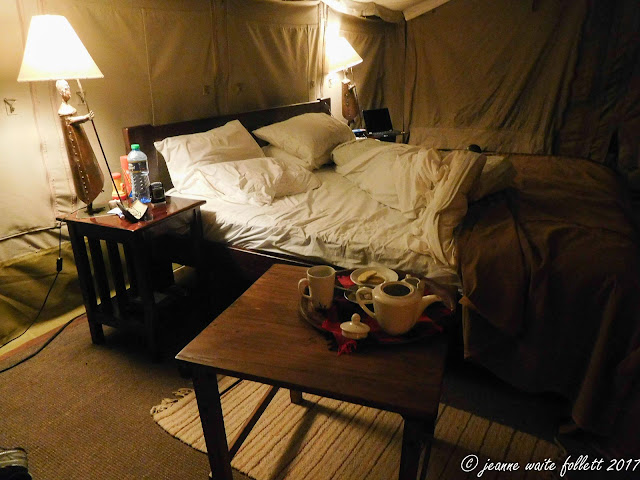 NOTE:   Every night, one or two hippos walked across the lawn at the same time   And every night but the last, the genet appeared about 8:30.   It paused in the bushes by the buffet, then streaked across the flagstones to inspect the buffet grounds for morsels. 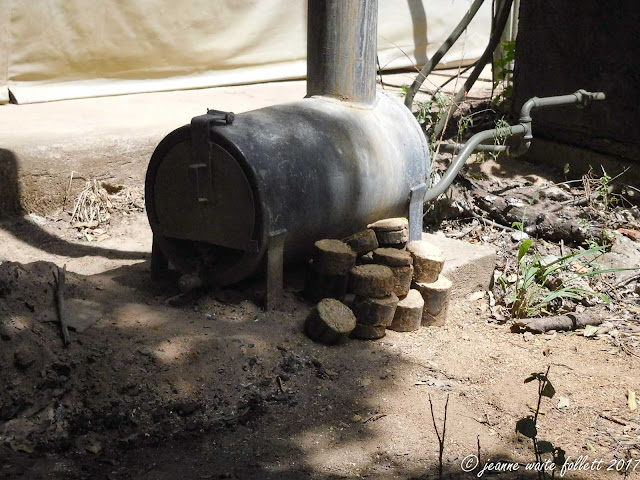