Team Cousins, by dint of having filled its only elk harvest permit (held by Bud), is in grave danger of becoming a quartet of slackards and lay-abouts.

This is expiated to some degree each morning when the BOING! BOING! BOING! sounds of reveille spew forth from Chris’s phone at 4 o’clock (reminding me of the wretched scene of the little girl in The Exorcist), and the cousins spring from their sleeping bags and pretend  get interested in the morning preparations.

Dressed, brushed, and combed, Chris sets out the sandwich assembly line, while Bud whips up breakfast in the form of pancakes, or ham and eggs, or French toast.   Bob….   Well, I forget what Bob does during these moments, even though I am the official observer and chronicler of events, a duty I take quite seriously and fulfill from the command post of Bud’s Laz-y-boy recliner.   Well,  a motorhome version of a Laz-y-Boy.

Brad and Charles trek across the 12-foot wide “lawn” between the two RVs and join Team Cousins for breakfast.   Once we see them safely on their way out the door for their morning hunt, Chris’s sandwiches tucked into their packs, we crawl back into our sleeping bags for our early morning nap.

On this particular day, however, Team Cousins is on the move.  Right after that early morning nap I mentioned.

The temperature is above freezing, the sky is clear, and the winds have died to gale force as we set out into the Snowy Mountains to go sight-seeing.

We drive up a really decent dirt road into the mountains to a place called Sand Lake (elev. 10,124 ft), where there had once been a popular resort with rental cabins. 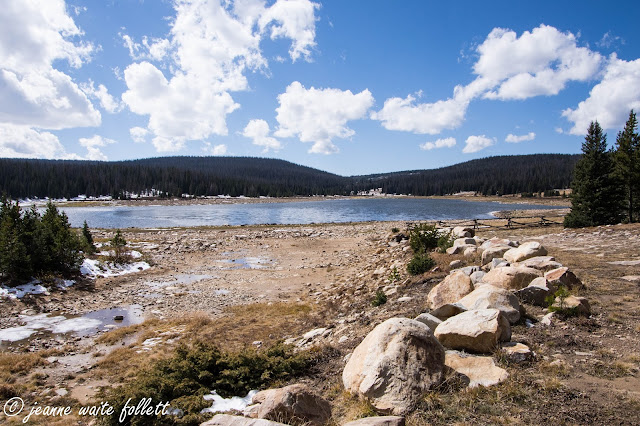 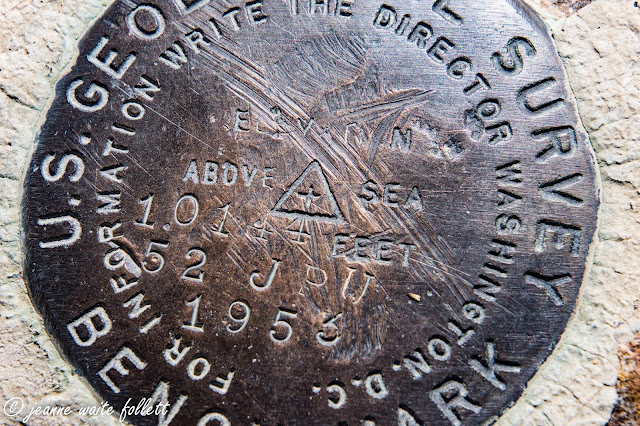 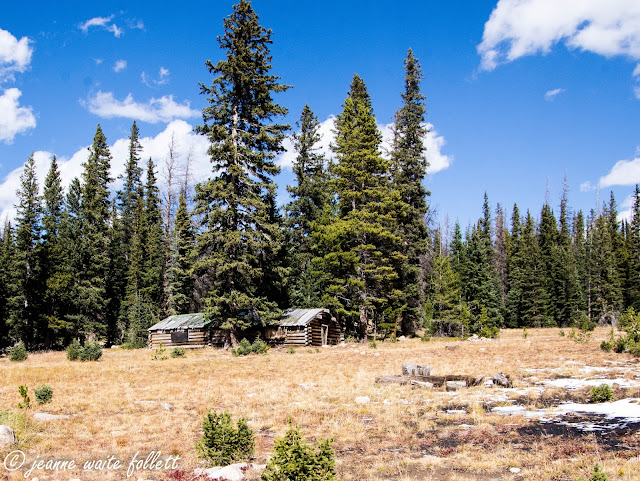 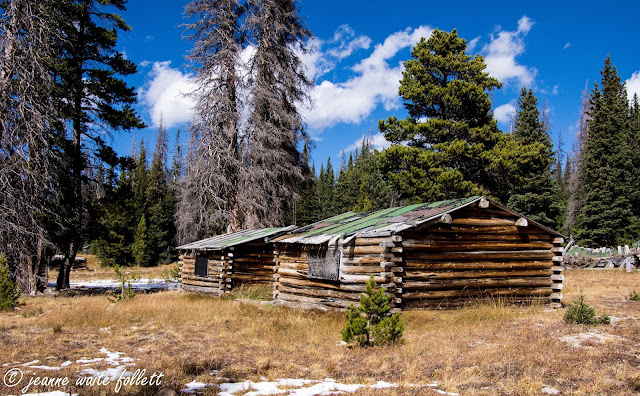 After many years of operation, the owners closed it for a couple years.  When they decided to reopen the lodge, they were told they would have to update all the log cabins with sprinkler systems, and that was the end of that. 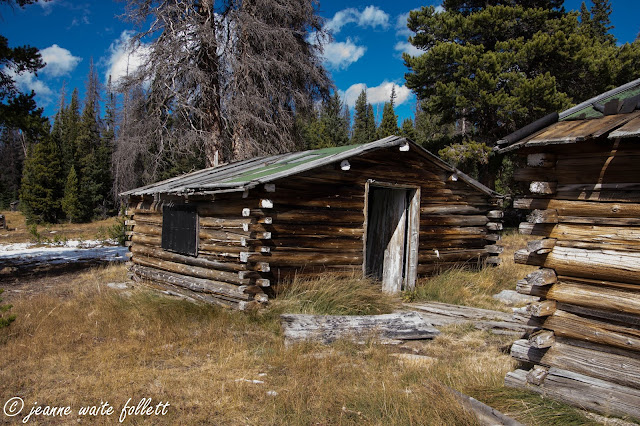 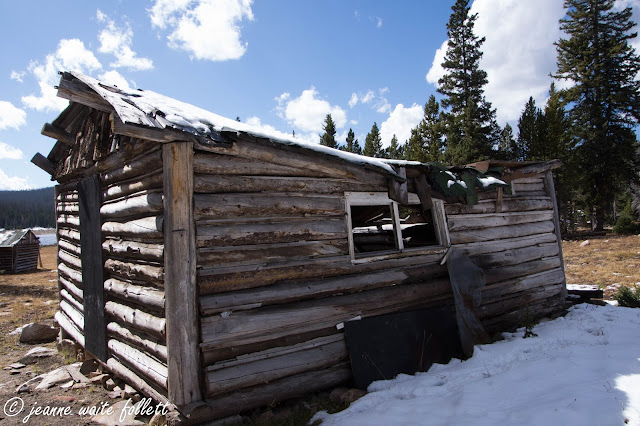 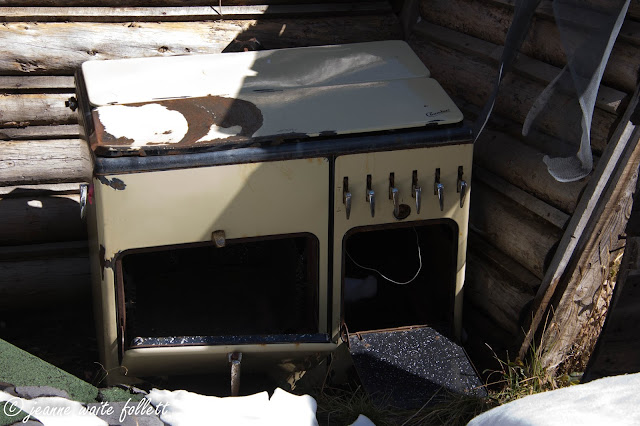 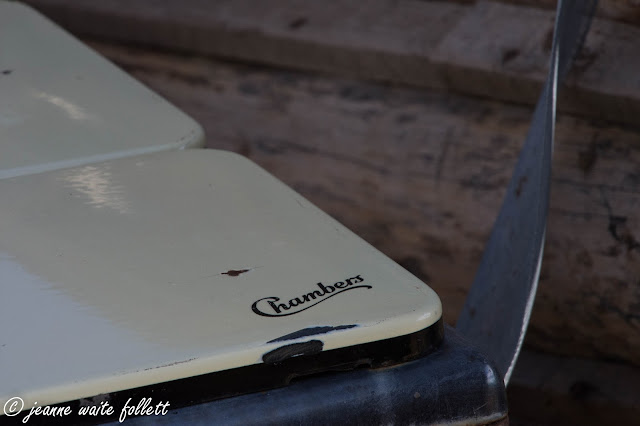 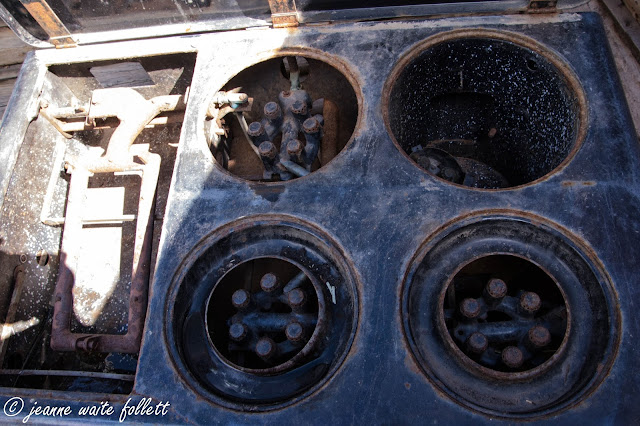 The lodge was torn down, some of the cabins hauled away.   Only a few cabins remain, most with caved-in roofs. 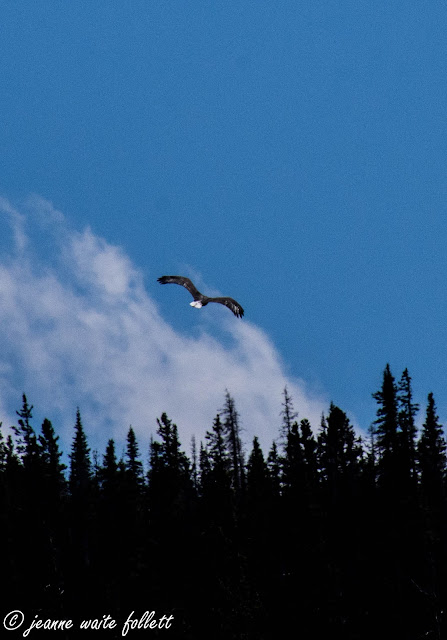 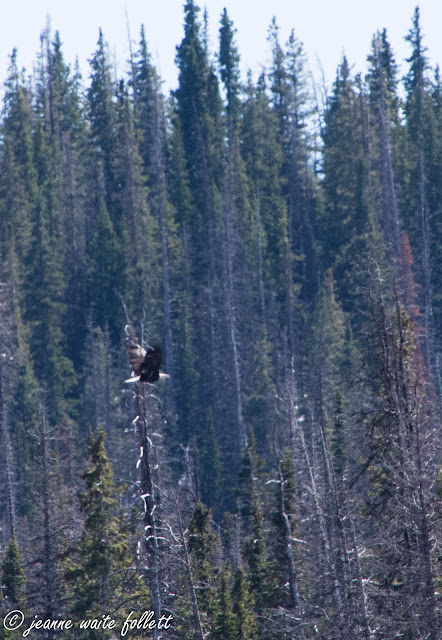 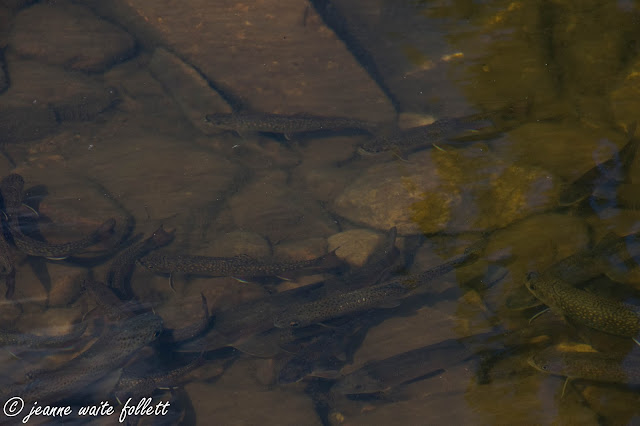 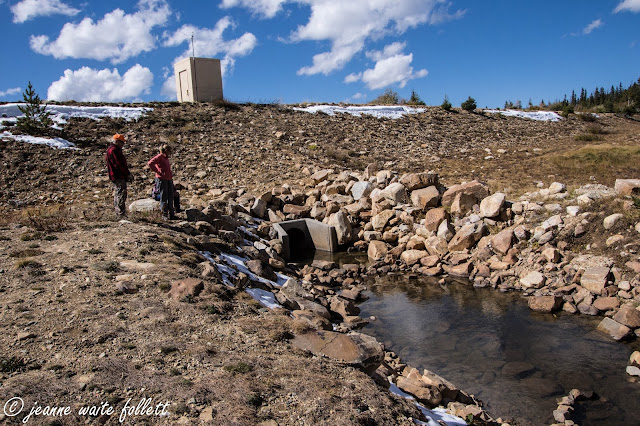 We decided to find a snow-free table in a nearby campground and eat lunch in the warm sun.  We were the only ones there. 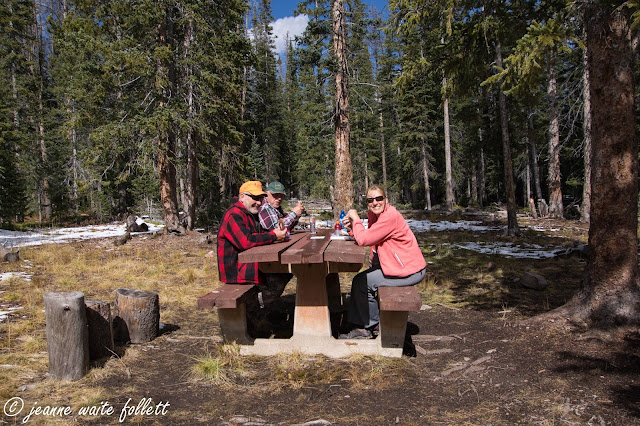 Then the gray jays showed up. 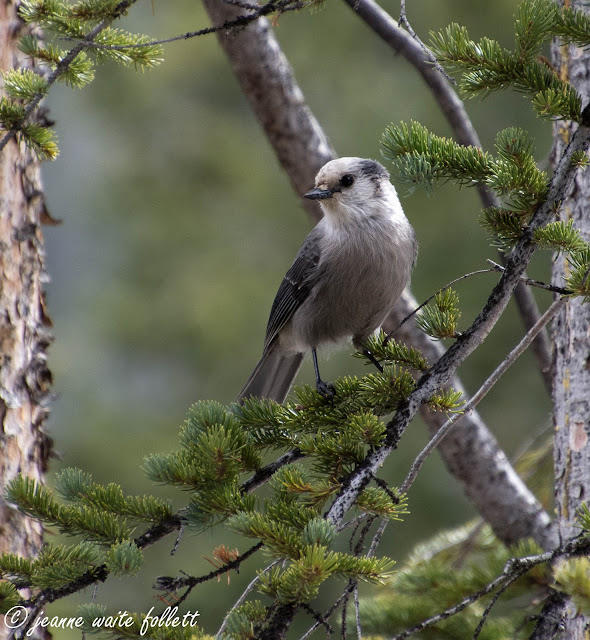 This is what Wikipedia says about camp robbers:   The colloquial name camp robber is used for several species of birds (all corvids) known for their fearlessness around humans and their proclivity for stealing food from campers and picnickers:[ 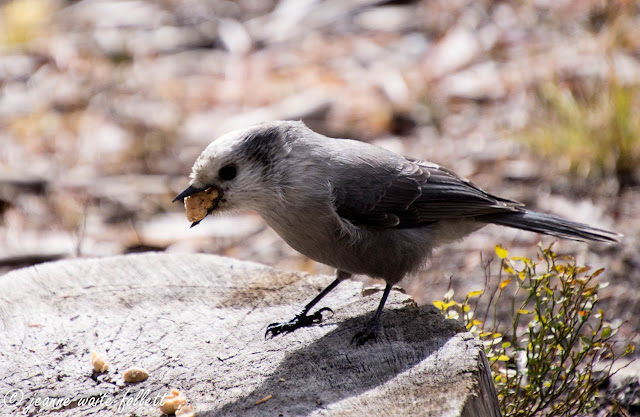 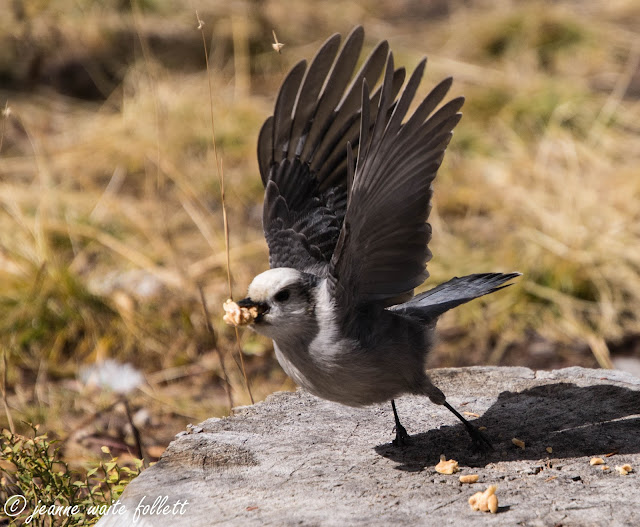 I’m learning to use the camera on my new-fangled contraption called a smart phone.   There are far too many options available for a beginner like me, however that multitude of options does explain the umpteen still and video shots of gray jays taking peanuts from my hand, accidental videos rather than still shots of a plate of food, and 42 photos of my left knee. 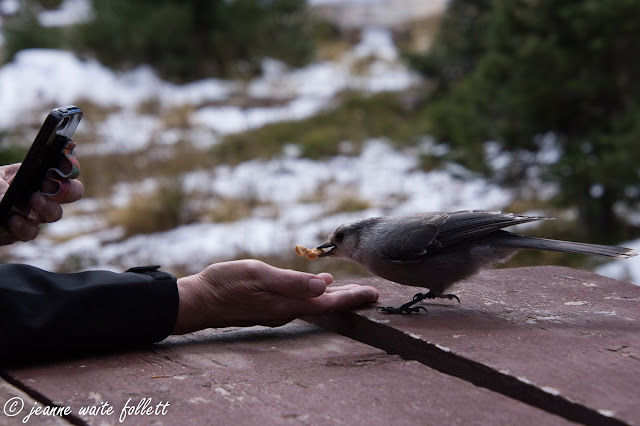 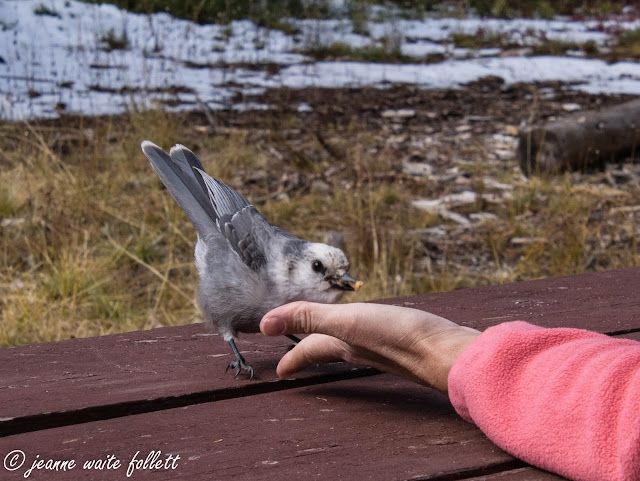 I’m also learning how valuable the phone camera can be in stealth photography.   Walk into a room with a camera, and people start turning their backs or giving you the stink eye as they wonder what the heck you intend to do with that camera?' 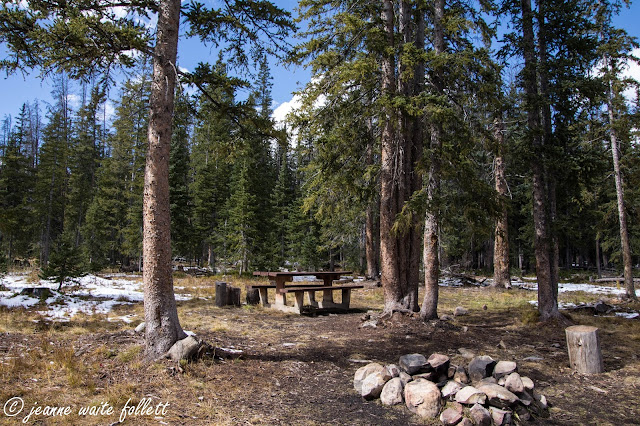 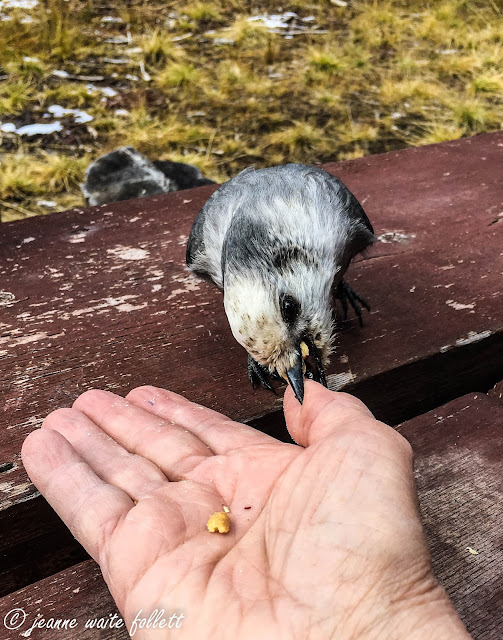 We were entertained for more than a half hour with their antics.

Then, because I wasn’t already flirting with not-being-able-to-breathe danger at almost 10,000 feet of elevation, we headed for Snowy Range pass (almost 11,000 ft) and views of 12,013 Medicine Bow mountain, dodging moose along the way. 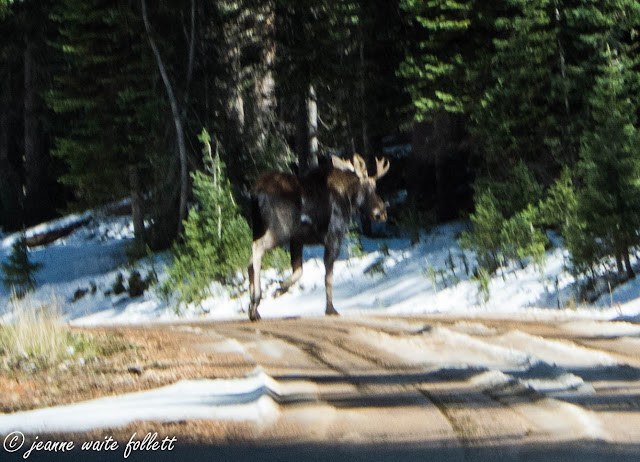