The Wyoming Journals, Ch. 11: Breathing the Rarified Air of Wyoming


Before leaving for Wyoming, I visited a doctor and obtained a prescription for drugs to prevent high altitude sickness.  I followed the instructions and started taking them the day before I left Anchorage for the Mile-High city of Denver and then to Wyoming, and continued taking them for several days.  Then I tapered off with a half pill twice a day for one day before quitting altogether.

Theoretically, I was then acclimated to the elevation.   When that last half pill wore off, I did notice a great difference:  Coke and Diet Coke returned to their familiar flavors and I was no longer in a drugged stupor that demanded several naps a day in addition to a full night’s sleep.  In fact, I felt pretty darned good and only occasionally had to stop to catch my breath in this oxygen-stingey air.

We are “camped” downhill from a sandstone formation called White Rock and the walk to it is about a quarter mile along a dirt road with maybe a ten-foot elevation gain before it descends again.  I intentionally spelled out “ten-foot” lest you think I accidentally omitted a few zeros.   Even though I felt good, I had to pause a couple times on the uphill leg and take deep breaths every time I made the journey.

I really have no idea what the elevation gain is along that road, but I’m pretty sure it isn’t a hundred feet or so.   Nonetheless, gasping for air is gasping for air, and that should be worrisome.

Today, after visiting Sand Lake and sharing our lunches with gray jays, Bud takes us even higher in the Medicine Bow National Forest.   We reach Snowy Range Pass, with an elevation of 10, 847 feet.   I still feel good. 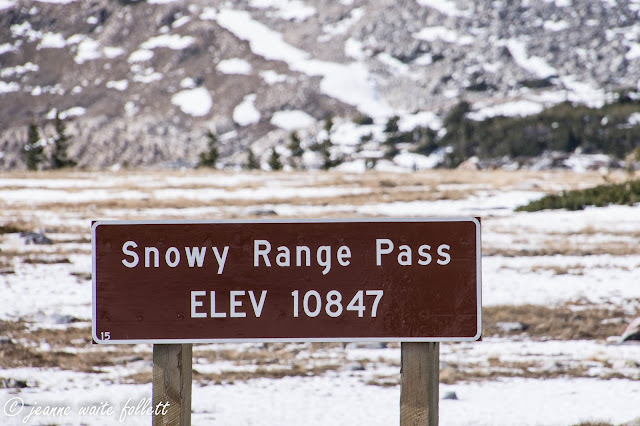 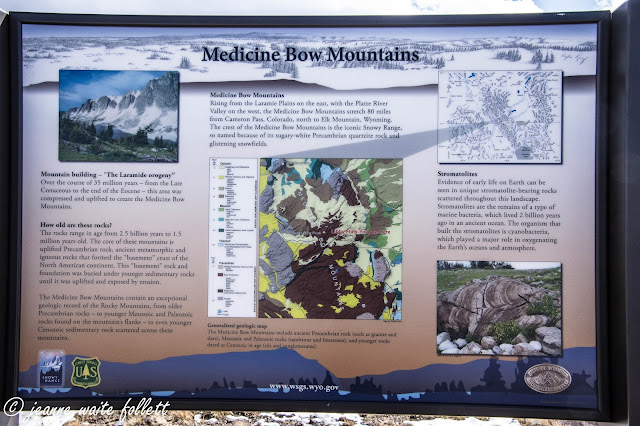 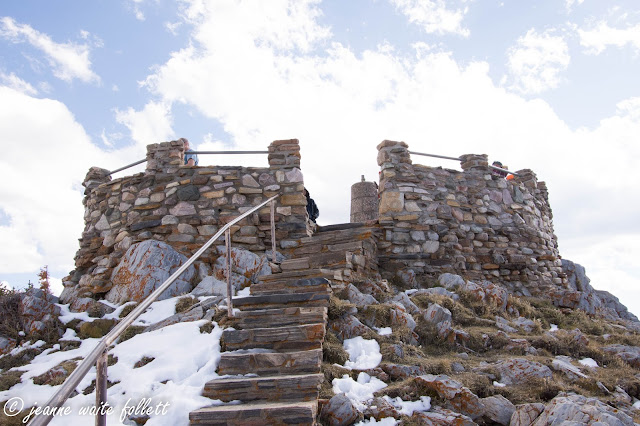 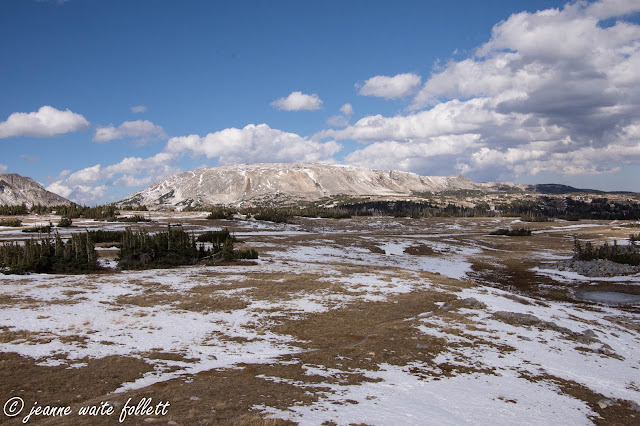 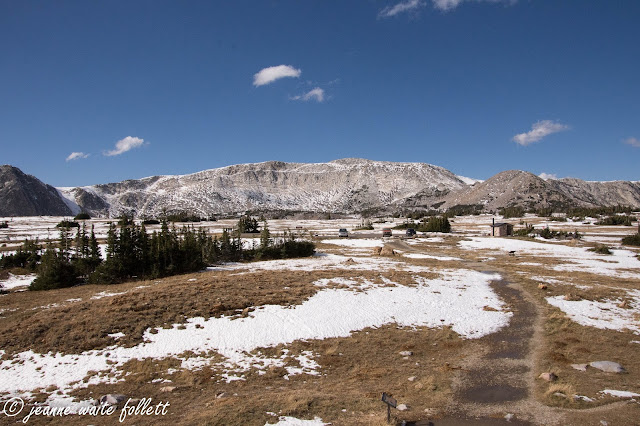 Down the road a ways, we find Lake Marie, one of the prettiest mountain lakes I have ever seen, and I've seen quite a few.

I am immediately drawn to a small rock building next to the parking area. 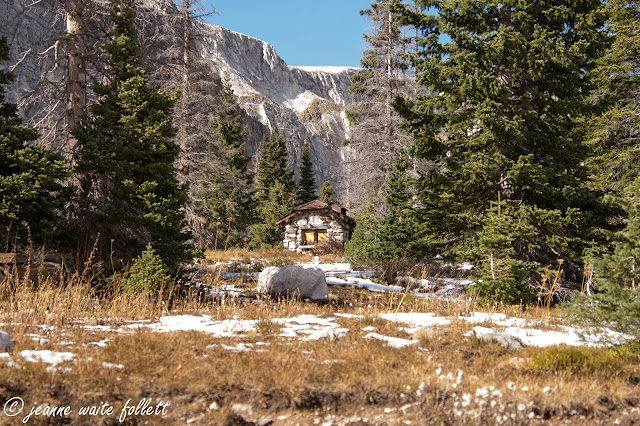 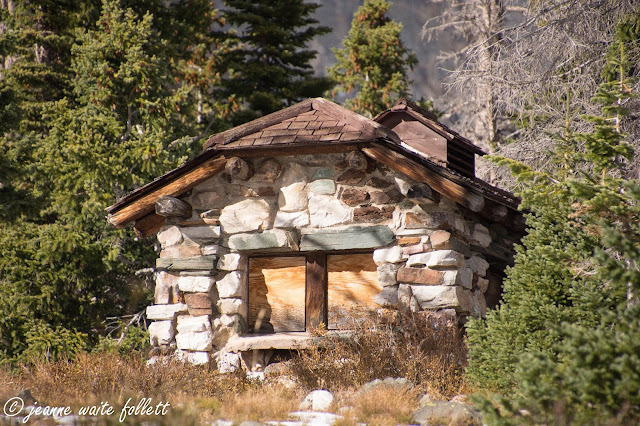 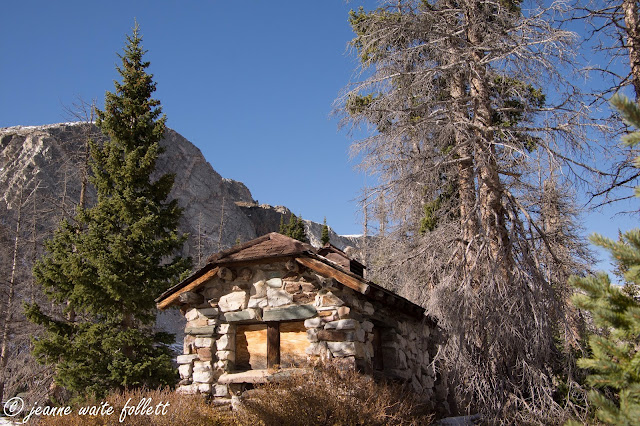 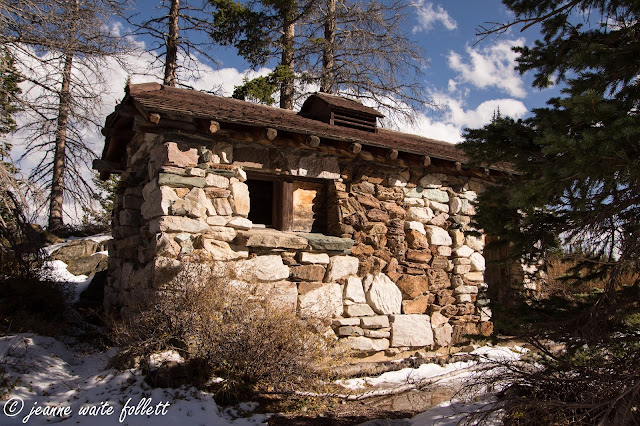 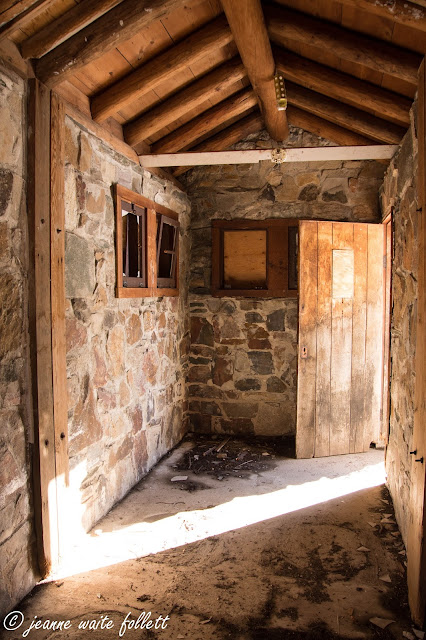 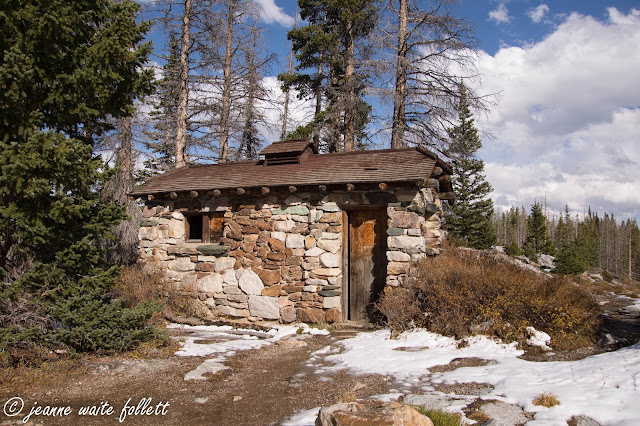 From the back of the cabin,  I can see the lake, so I head there next. 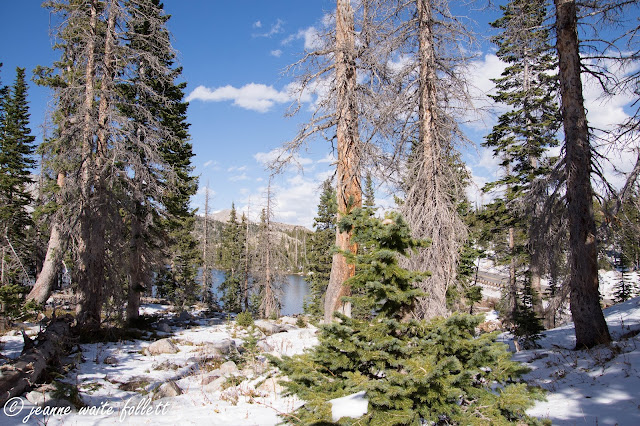 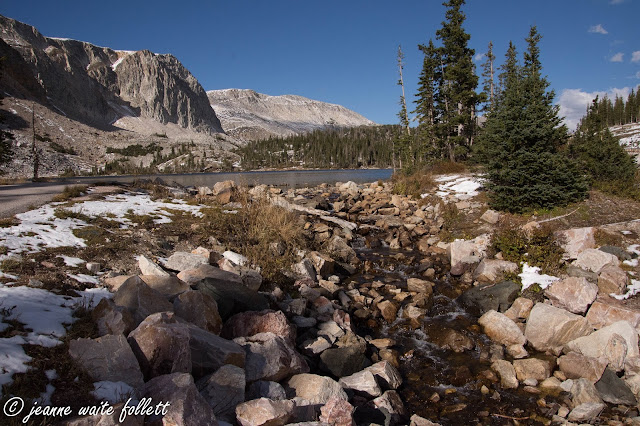 This explanation of why the lake is called Lake Marie left me gobsmacked.   To understand why, you have to remember how things were for women in that era. 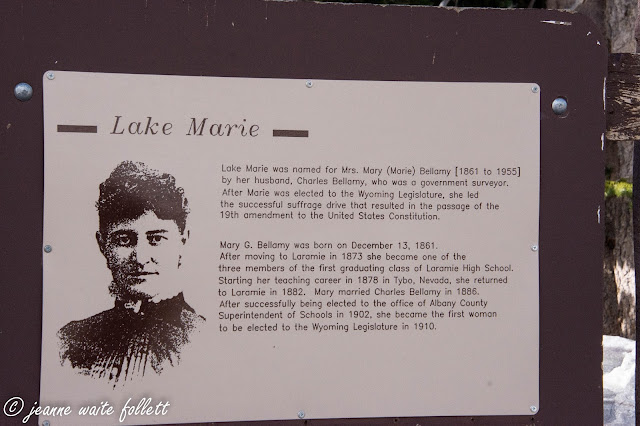 "Lake Marie was named for Mrs.Mary (Marie) Bellamy [1861 to 1955] by her husband, Charles Bellamy, who was a government surveyor.  After Marie was elected to the Wyoming Legislature, she led the successful suffrage drive that resulted in the passage of the 19th amendment to the United States Constitution.

Mary G> Bellamy was born December 13, 1861.   After moving to Laramie in 1873 she became one of the three members of the first graduating class of Laramie High School.   Starting her teaching career in 1868 in Tybo, Nevada, she returned to Laramie in 1882.  Mary married Charles Bellamy in 1886.   After successfully being elected to the office of Albany County Superintendent of Schools in 1902, she became the first woman to be elected to the Wyoming Legislature in 1910." 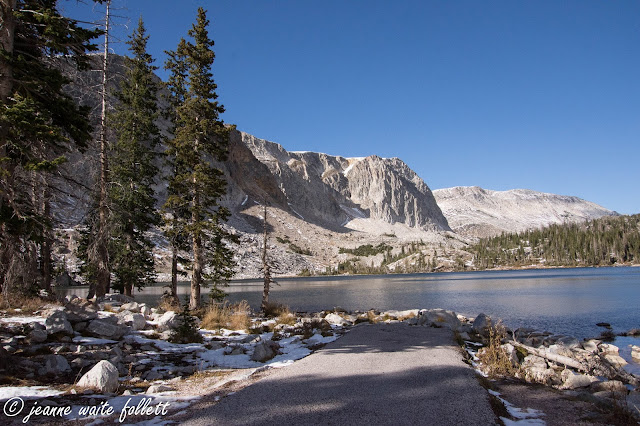 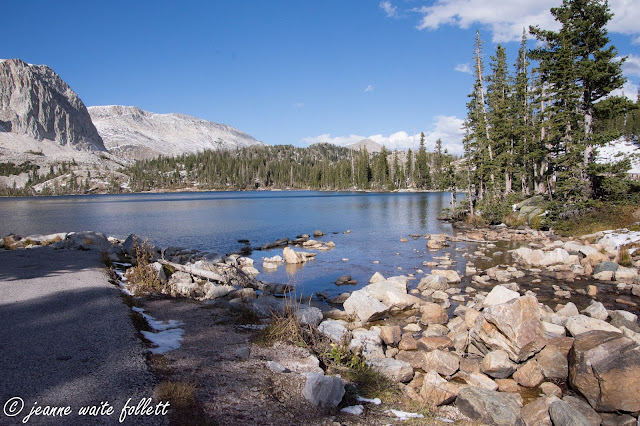 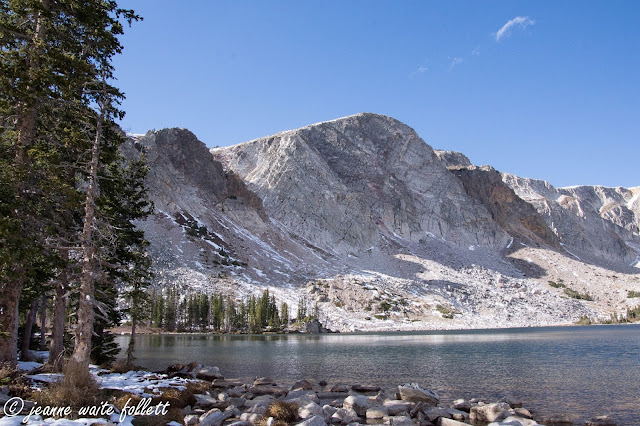 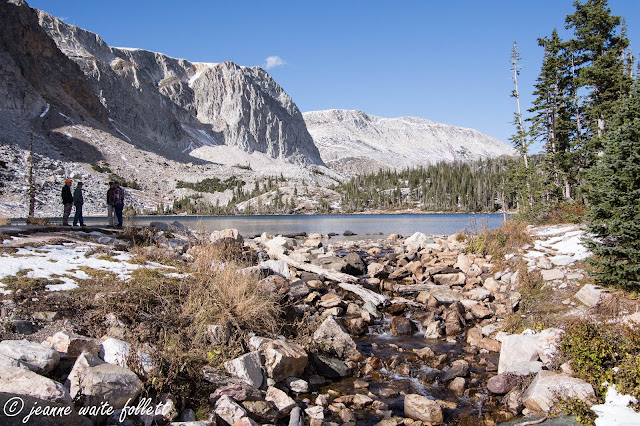 When we return to the parking lot, I see this sign. 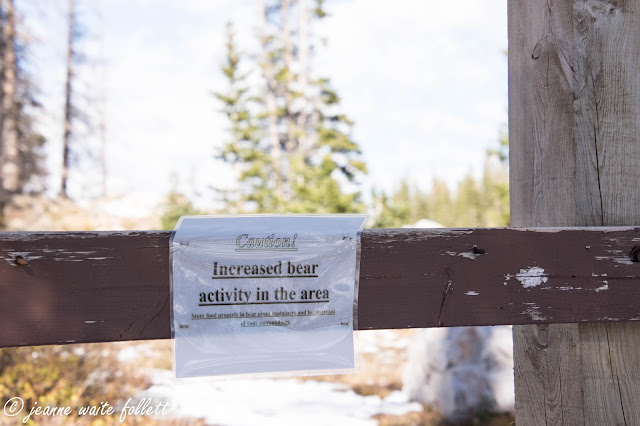 And then we headed home through the mid-autumn foliage.... 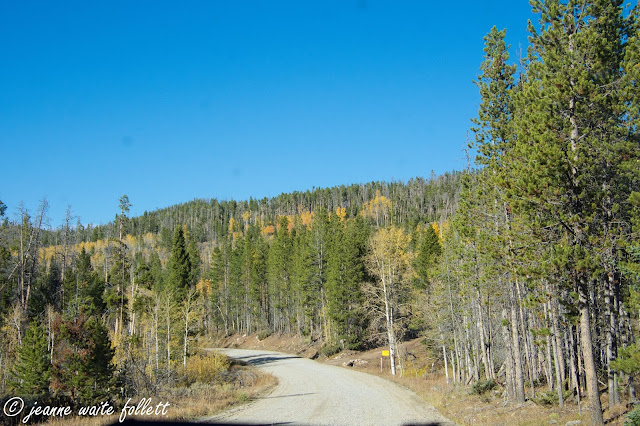 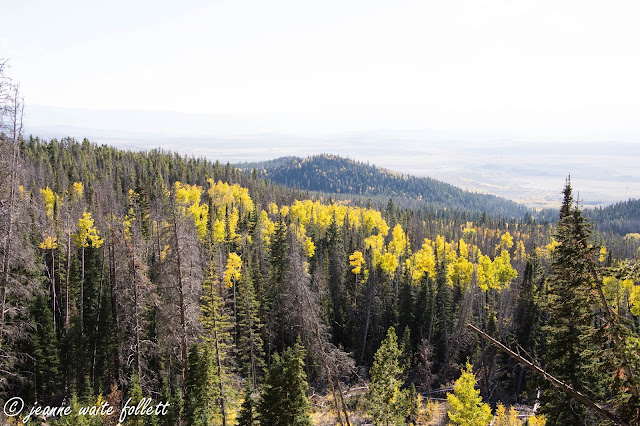 ....and found the perfect aspen in golden dress. 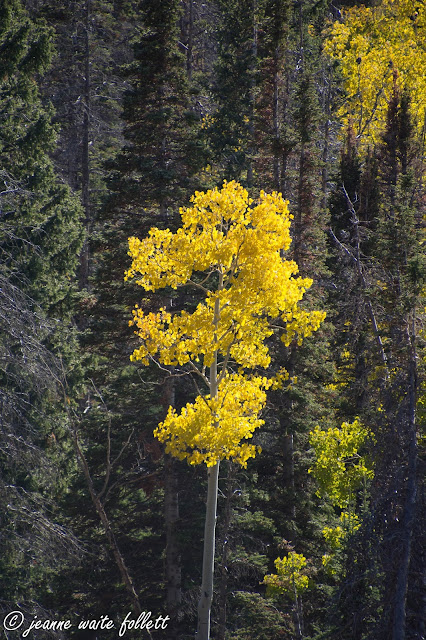