The Wyoming Journals, Ch. 15: Harvesting Elk with a Chain Saw

The cast changed at the elk hunting camp in the Snowy mountains of Wyoming during the weekend that cousins Bud and Chris and I were off in Casper visiting at Bud’s house.   Cousin Bob headed north for home, and Brad’s son Charles flew south to his home.

Sunday, Dave appeared to fill out the cast for this week.   Bud had already filled his elk permit, so that left Brad and Dave as eligible hunters.   The rest of us were the supporting cast.

So, it was as the supporting cast that we took off into the logging trails to find Brad and Dave one mid-morning, after we received word that Dave had downed an elk.

Of all things, a chain saw became the most appreciated piece of gear for retrieving the animal.  Now, I’ve seen chain saws used in hunting camps before, but they were assigned to firewood detail.   This chain saw served an entirely different purpose, and it didn’t even have a bar and chain on it!

Once the animal was field dressed and ready to be taken off the steep hillside, Bud got the chain out.  As I said earlier, the saw didn’t have a chain on it.   Instead it was equipped with a winch that made dragging the animal up a steep slope and through a thick forest pretty easy, all things considered. 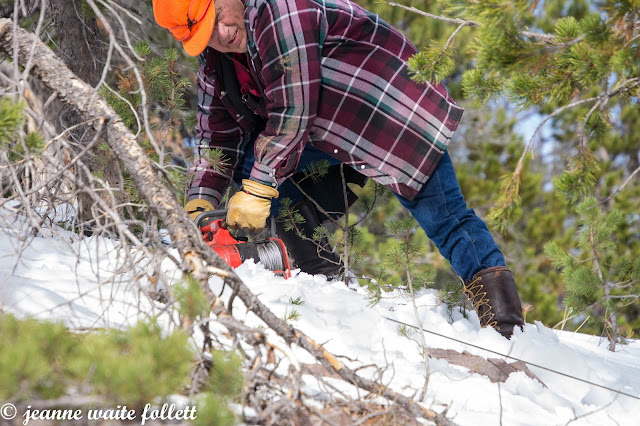 The saw was positioned strategically a few times and the elk pulled through the trees in straight lines. At the vehicles, it was winched onto the back of Brad’s truck and transported to camp. 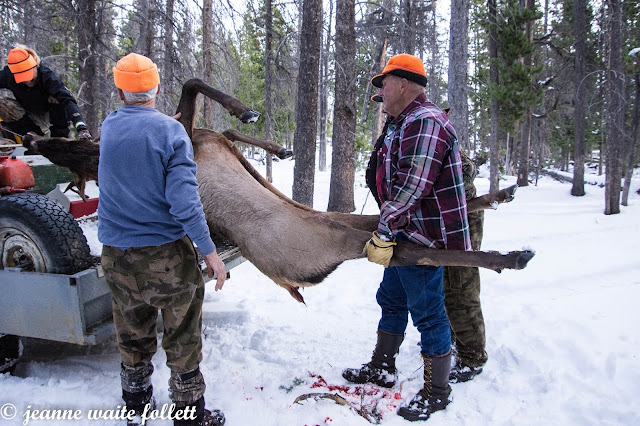 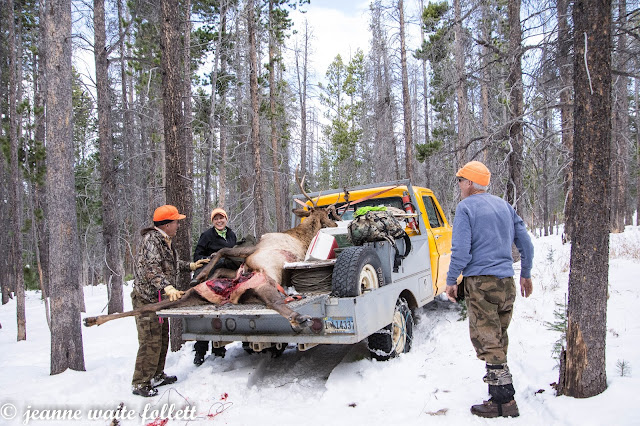 Then, it was transferred to Dave's pickup and off he went to deliver the carcass to the processor in Medicine Bow.

That afternoon, I have to face a reality I never wanted to encounter again.   I had noticed earlier that my voice had a somewhat raspy tone to it and that I felt kind of sluggish.   While resting after lunch, I realized my nemesis was back:  high altitude sickness, but to a mild degree thus far.   I knew some pulmonary edema was accumulating.

I had a few pills left from the prescription, and I started taking them again and they helped me feel better but not entirely well.   For the next few days, I stayed in the motor home, happily writing and reading and taking naps while the others helped Brad in his hunt for a cow elk.
I am not sure I ever convinced Bud that I was as happy as could be.

And that ended my days on the support team, but the adventure wasn’t over yet.

Chris and I left camp the next weekend, headed for her home in Colorado, near to Denver where I would fly out of to return home.

Along the way, we would have a couple adventures that I’ll tell you about next.

Email ThisBlogThis!Share to TwitterShare to FacebookShare to Pinterest
Labels: Wyoming