Just outside Kichche camp, two tiny antelope called dik diks are resting in the shade of a green shrub.  The smaller of the two is the male and has horns that are about three inches long.    He lies behind a log, chewing on something, his face covered with flies.

The female appears apprehensive, not of us, but of the numerous predators that live in the bushveld and savannahs of Africa.   We are so close to them I have to pull in my long lens to get them in the frame. 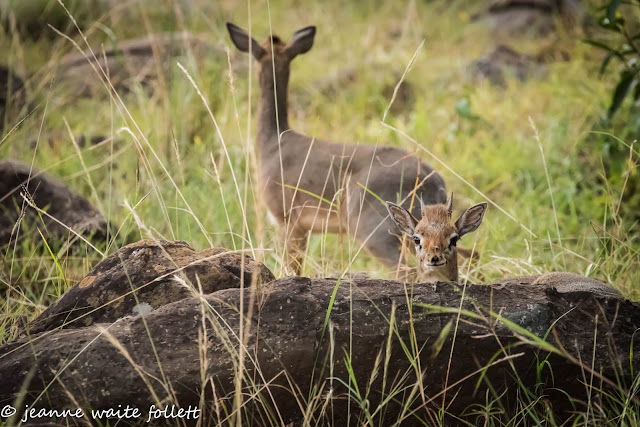 At first, I am amazed that they tolerate us because all the dik diks I’ve seen prior to these are quite shy and run away.   In the next couple days, I will see dik diks in camp, and one of the staff tells me the little antelope come into camp because they feel safe from the night predators here.

Standing about a foot high at the shoulder and weighing around 13 pounds, I find these little creatures fascinating and incredibly cute.  They are monogamous, a state brought about by generations of learning that it’s much safer to stay with one mate than to roam the savannah in search of another.

We drive far across the savannah of this Mara North Conservancy and come upon a large pride of lions.    Many are sound asleep on a mound and others are in the nearby bushes.   There appears to be about a dozen.

A year ago, this pride was farther south in the Masaai Mara National Reserve and were known as the Marsh pride.   They were featured in the Big Cat Diaries.   BBC was again filming them when I was there in February of 2017.

The lions of the pride were Karibu and his brother, Jambo (also called Rafiki).    Shortly after I left, other lions challenged the two brothers for the pride and won.

Karibu and his brother, along with many of the females and surviving cubs escaped northwards.   I saw photos of them hiding in ditches during their journey across the Masaai Mara reserve.   They settled in the Mara North Conservancy where they appear to be thriving. 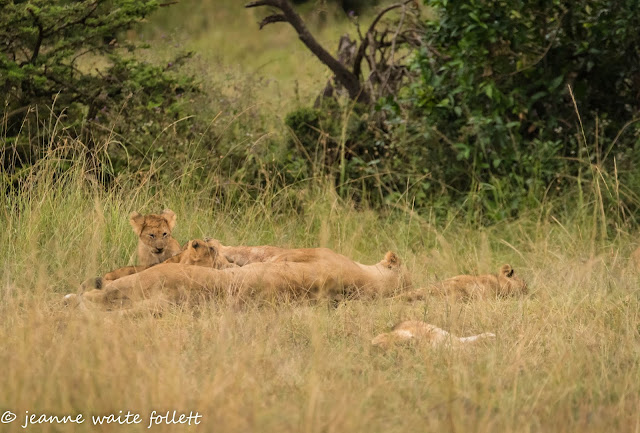 As we watch and photograph the "flat cats" (a joking term for sleeping cats), a lioness emerges from the brush with a small impala in her jaws. 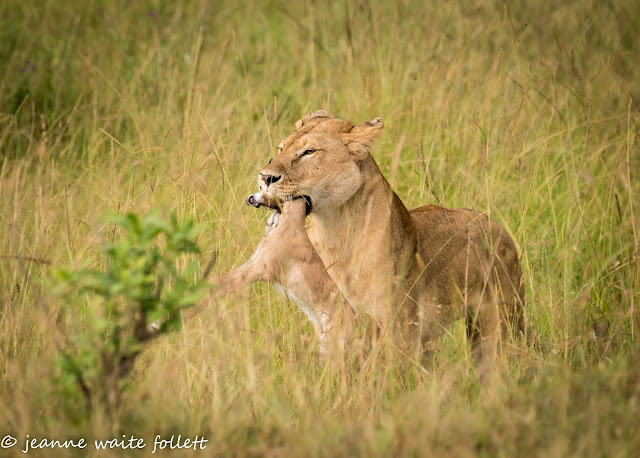 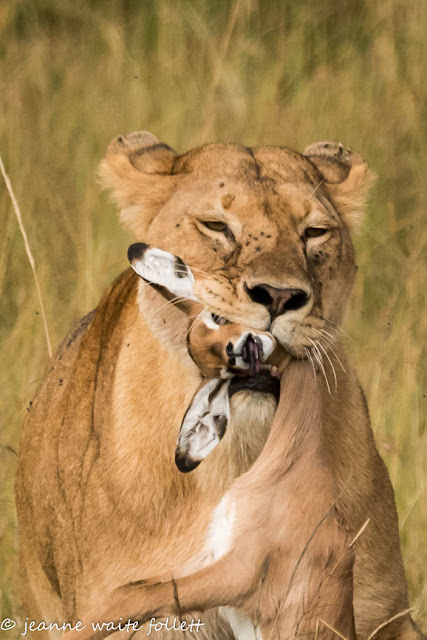 She attracts not only the black flies that plague all the animals of Africa, but also her fellow pride members who want to share the meal. 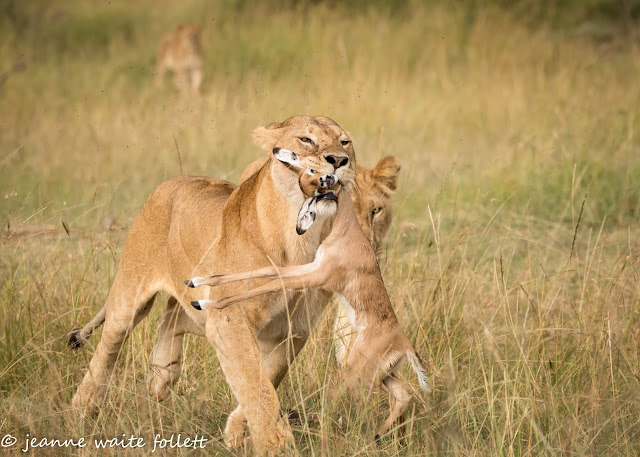 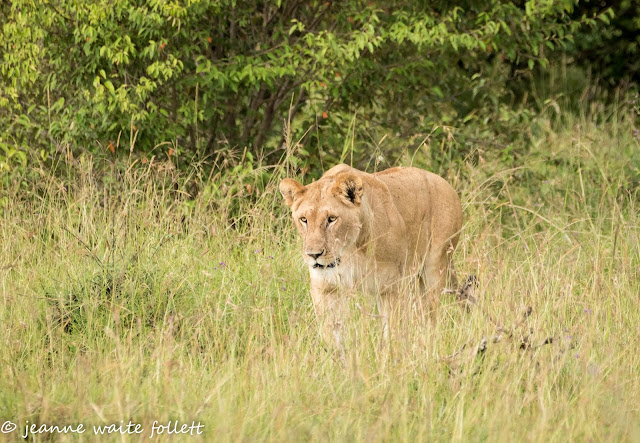 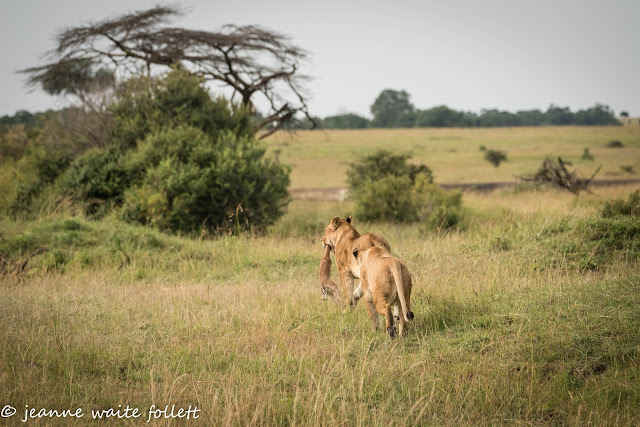 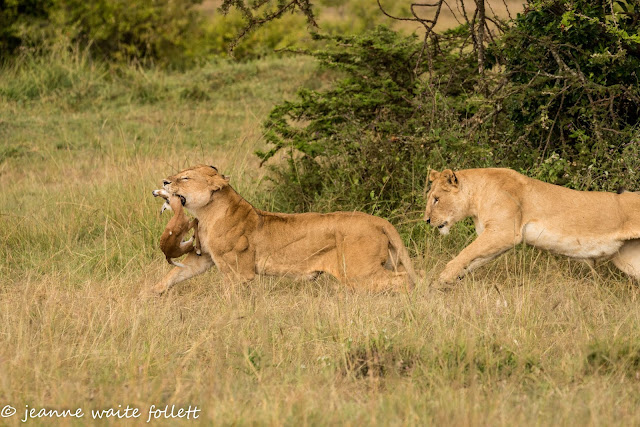 Two cubs, who had been playing with each other, spot the lioness and rush to get something to eat. 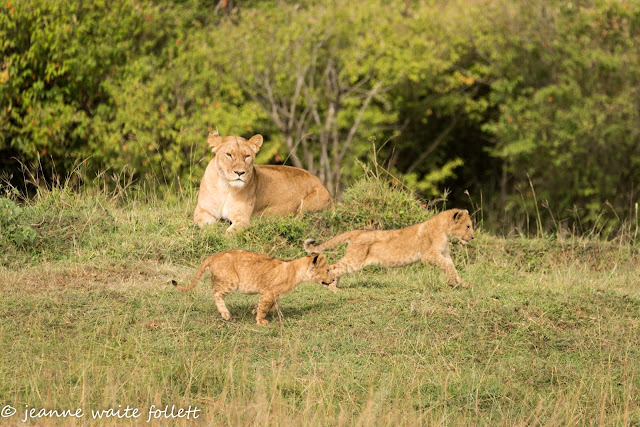 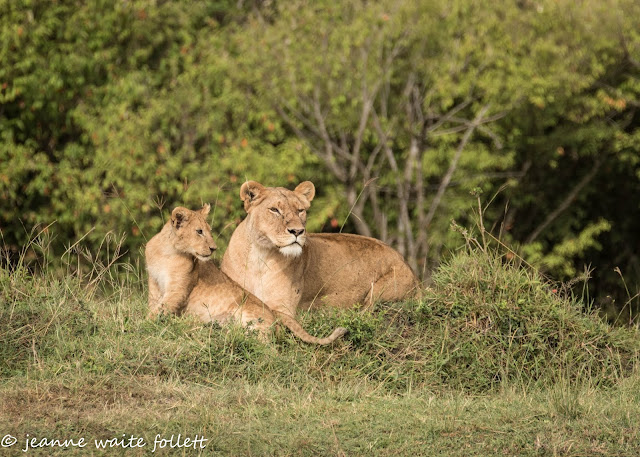 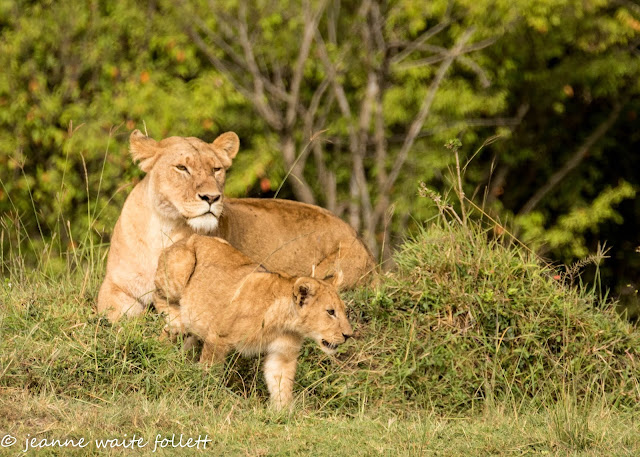 Not this time.   The lioness won't share with any of the lions, cubs or adults.   I wonder about her reasons for this.   To my inexperienced eye, she looks to be pregnant.   Maybe she's hungry; maybe she won't share because none of the other lions helped her hunt

The cubs reach her and she warns them away with a growl.   They cringe beside her, hoping for the best.

Persistence pays off, and one cub scores a leg.   It won't provide much sustenance, but it's something to chew on. 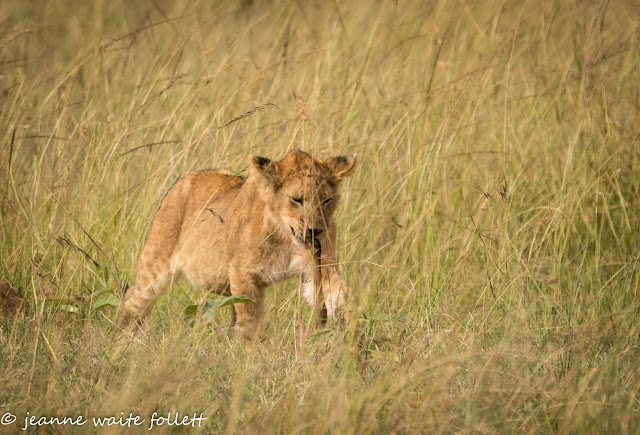 The lioness moves away from the cubs. 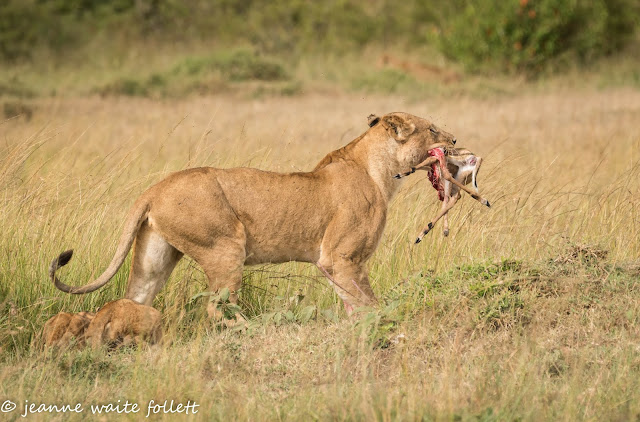 While we watch the lioness elude the pride members so she can eat in peace, our attention is drawn to the hillside and a lone female impala. 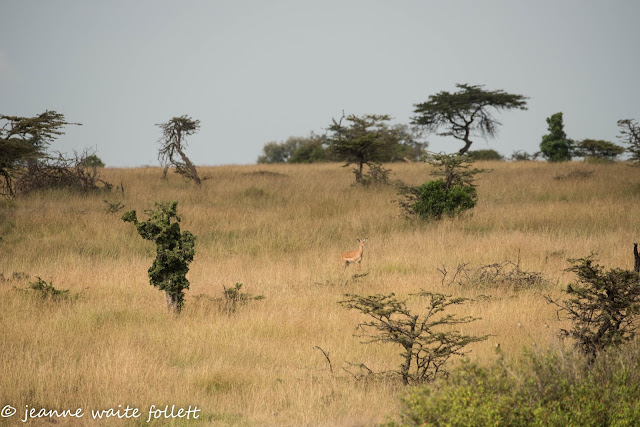 She is staring at the  predators below here, looking for her baby. 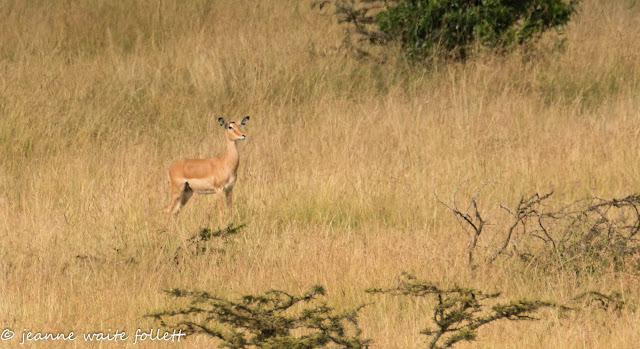 (Note:   Just in the last month, veterinarians were called to treat an injured Karibu.   In addition to other wounds, they found a hind leg shattered and beyond repair.  The beautiful lion was euthanized.   Now, the pride is defended by only one male lion and that makes it vulnerable to roaming lions looking to take it over.   For the cubs, such a takeover could be deadly.)