Notes from the Denali Highway: The Nature Hike, Part Two


As we drive along, we see Jamin and Michael approaching, so we stop in the middle of the road.

We make arrangements to meet in an hour.   They go after the whimbrel, while we return to the lodge for breakfast.  It’s now mid-morning, and we’d been in the field since 5 A.M.


Stuffed with cheese omelets (add diced ham to Leilani’s) and hash browns, we rush back to the appointed meeting place and park.   And wait.   Wait some more.   Then wait a while longer.

We discuss starting without them.   Jamin had shown me the entry point the evening before in the rain, a trail through the willows that broke out onto open tundra.

We wait a while longer, and discuss it more seriously.   Leilani is reviewing photos on her camera while I gaze out the window, mentally tracing the route.

Across the gravel to the spruce sapling, right to the next sapling, through the willows to the open… 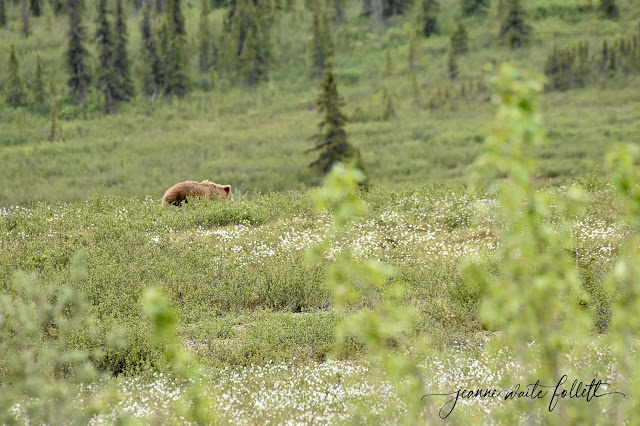 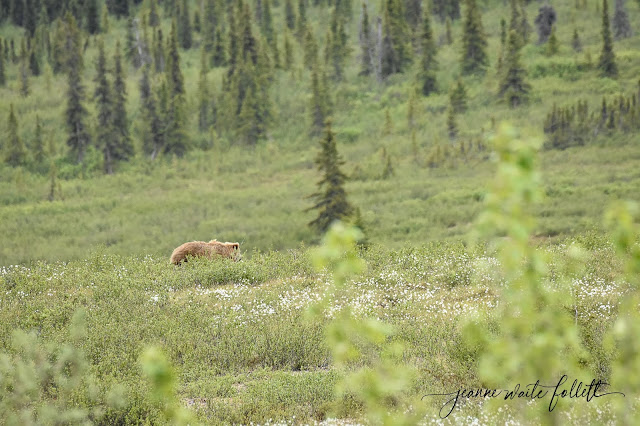 I’m piling out of the truck with my camera, hoping to get a proof shot before the grizzly disappears.

I don’t get the words out right and Leilani takes them literally.   I meant "on the ridge in front of you."

She won’t even roll down her window for fear the bear is RIGHT THERE!   It doesn’t occur to me until later to wonder why she wasn’t questioning my hasty exit from the truck.

Right on the ridge about a hundred feet away, right where we would have exited the willows, is a grizzly with its nose to the ground, sniffing for edibles.  I get off a few fuzzy shots before it disappears in the direction of the pond where we also would have gone, most likely raiding all the nests it finds.

We jabber in excitement at the sighting, then look at each other as the same thought crosses our minds:

We never go to the pond.   Jamin and Rob do though, with bear spray.
In the meantime, Michael ponders what he would have done if the grizzly had come upon them while they were lying at the edge of the pond, completely focused on birds and oblivious to everything else, though somewhat concerned about the four-foot-long picked-clean skeleton of an unidentified species that was lying on the tundra next to him..