Thus, a trip to a gift shop is what I expect when I awake the morning after our sunset visit with Uluru. There is an Aboriginal cultural center to be seen, Simon says. And, our itinerary notes mention a drive around the five mile base of the 1100 foot high rock. I am not expecting much more than a close-up view of Aboriginal rock art in caves and another gift shop.

We have to be at the Ayers Rock Airport at noon for a flight to Melbourne, so we leave the hotel at 8 a.m. for Uluru. Along the short drive, our driver relates some Aboriginal legends regarding Uluru. This is a sacred site to the Aboriginals, Laurie says, and some specific spots around the base are so sacred to them, they request no pictures be taken of those places. These, he explains, are sites of gender-based rituals, and photographs might lead to inadvertent violation of the taboos by Aboriginals of the opposite gender.

We approach Uluru on its right side, follow the paved road around to the shaded rear. The driver parks the coach and we descend into the morning chill. Our group is silent as we walk along the pathways, dodging other groups and independent tourists. I am struck by the realization that Uluru is not the seamless loaf of red rock that it appears to be from a distance. Instead, on this side, are canyons and fissures, massive boulders and overhangs. Few speak, but in the exchange of eye meeting eye, a gigantic “WOW” is communicated. 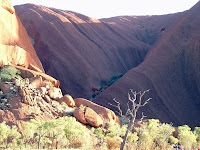 Like an ice-berg, Laurie continues, only a third of this rock is above ground. That information bog-boggles my imagination.

The drivers points out features and marks, telling us this is where the Aboriginals say Kuniya, the python woman, lived and where she fought Liru, the poisonous snake. He points to a dark serpentine mark that represents Kuniya on the rock face. We reboard the coach and drive to another location a sh 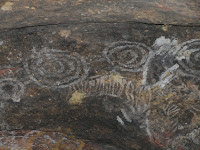 ort
distance away. A footpath leads to a water hole at the base of the rock. Another drive takes us to a cave where the Aboriginals left paintings. We recognize the symbols—man sitting, water hole, meeting place. The platform on which some thirty or more tourists stand protects the underlying flora as well as the paintings themselves. No one speaks.

Another stop, the path leading to a massive overhang, all smooth and curving and flowing like softly over-stuffed furniture. I walk up a gentle incline and step onto a long ledge
Cave paintings
Kristy Hart photo 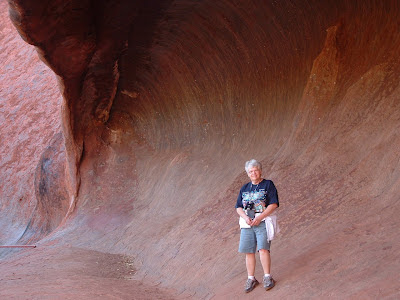 In the arms of Uluru Soucy photo
created by eons of erosion. I am standing within Uluru, and I am overwhelmed with its beauty, its gracefulness and symmetry. Even the name is ideal, I think, with its melodious vowels and soft consonants.

I meet one of my friends on the pathway. “I had no idea,” she says, “how sensuous it was.” It’s the perfect word. “Sensuous, sensual”—relating to pleasing of the senses. My senses are stunned into overload. There are no sharp edges on this red sandstone. Erosion has polished it into fluid curves and sinuosity. I touch the rock, lay my hand upon it, and imagine that I am stroking its whole. The rock is warm in the early morning sun, almost as if it is alive.

There is something else here: there is a spirituality. It is easy to understand why the Aboriginals consider this a sacred place. I could be in a church or a cathedral, a temple or a tabernacle. There is an aura here that commands respect and silence. This is a place where one communicates with one’s soul, speaks with one’s god. There are dozens of tourists here, I know, but I am oblivious to all, so overcome am I with the tranquility of Uluru. I feel that I am dressed far too casually to be in the presence of this place.

Along one slope of the rock, stakes are set in the sandstone with a chain handhold leading towards the summit, an arduous half-mile climb. People come from around the world to climb this icon. At the base is a sign next to a portal in a simple fence. The sign explains that Uluru is of great spiritual significance to the Aboriginals, and they ask that we choose NOT to climb the rock. In addition to its place in their religion, they are concerned about our safety.

Today, the park service has closed the climb, for reasons unexplained. It may have to do with expected weather or winds, although today is mild and still. Nonetheless, I am pleased that no humans are sullying the route. 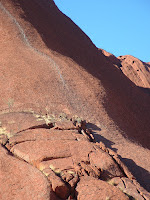 Later, I do some research and find that at least 35 people have died while climbing Uluru. I recall how, some years ago, a car accident killed a couple people not far from my home. It occurred on a gentle curve near a popular hiking trail, a place where we know to watch for moose and bears crossing the two lane highway. Close by, red salmon fight the current in Moose Creek to reach its headwaters and spawn. Those deaths forever changed my perception of that particular curve.

South of Mazatlan one day, a tour guide told us the Mexicans believe one’s soul remains at the site of the person’s death, explaining the numerous roadside memorials where accidents had taken lives.

Is that the reason for the aura of Uluru? Is it the beliefs of the Aboriginals and the deaths that have occurred there? Or is it that Uluru itself has the capacity to touch one’s soul and to leave a piece of itself deep within?

I have seen many impressive geological wonders in my travels. I have seen the Grand Canyon in Arizona and Waimea Canyon of the island of Kauai in Hawaii. I have snow-mobiled through Yellowstone National Park in the winter and stood on top of the Arrigetch Peaks of northern Alaska in summer. I have walked the rim of Kilauea caldera in Hawaii and flown over Katmai Crater and the Valley of Ten Thousand Smokes in Alaska. I live in one of the most spectacular places on earth.

Nowhere have I been as touched by geology as the day I communed with Uluru. I look at photographs of a “red loaf of bread” and feel a bond. I know what that loaf-like image holds in store for those who venture close to it, for those who are open to its suggestion. 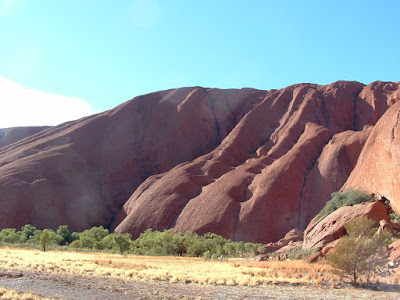 
I am forever changed, eternally moved, permanently affected by a massive red rock in the middle of the Australian Outback that is called Uluru.

A tee shirt I find later in New Zealand carries the consummate message. The print is of a hiker and mountains in silhouette, and bears the legend beneath: “The earth has music for those who listen.”