The Aussie Journals
Chapter 6, Above and Beyond

The camels got me up. No way was I going to miss this.

“The best five dollars you’ll ever spend,” promises Simon, and he hasn’t led us astray yet. Off the coach I go and into, of course, the gift shop, where I plop down my five bucks Australian and return to the paddock outside.

I wander around, looking at both saddled and unsaddled camels, then find the place where the camel rides begin. Two saddled camels kneel on the ground, wearing contraptions that look an awful lot like two saddles with the camel’s hump in between. These are dromedaries, one-humped Arabian camels.
Oh, no, I think. They can’t possibly carry two people at once. I examine the camels’ legs, notice the thick bones but the apparent absence of meaty muscle. Their hindquarters seem to be emaciated when I compare them to the rears of horses and moose. Their feet are extraordinarily wide, for floatation on sand. 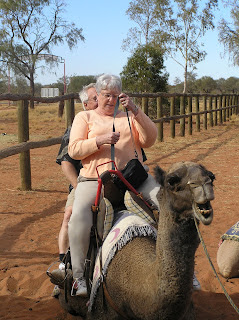 One camel seems to agree with me about carrying two people. She lets out a long, bellowing moan as she surveys the crowd before her. She moans again. Laughter. Again. For obvious reasons, her name is Mona, and she is a very vocal camel. Two well-proportioned Americans climb aboard Mona and another two on the accompanying beast. My knees hurt in empathy as the two animals lurch onto their front feet, then onto their rear feet. A handler leads them
around the large paddock.

I am at the end of the line and feel overwhelmingly grateful that my camel has to heft only me as it stands. I am full of questions as the camel is led around the ring.

“How much can they carry?”

“Four hundred kilograms,” comes the answer. That shut me up. I am pretty proud of myself when I can convert centigrade and kilometers into something close to the
Katy and Norman correct ballpark, but kilograms are beyond me. Later I
on Moaning Mona. learn it converts to 880 pounds!
Kristy Hart photo

“Why the cord in the nostril?”

"We can’t use bits and bridles on camels as they chew their cud. This cord merely pierces outer flare of the nostril, and doesn’t hurt.” I wasn’t sure about that, but I notice the gentle touch of th 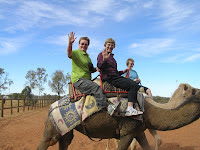 e handler and say no more.
My camel goes down on its front knees, then down at the rear, its legs underneath
itself, and placidly begins to chew its cud. I dismount, pat my camel a thank you, and my heart is racing. As Simon had promised, it was the best five dollars I’ve ever spent.

Back aboard the coach, we are off to the Yalara Resort, located on the outskirts of the famed Ayers Rock, deep within the Australian Outback. 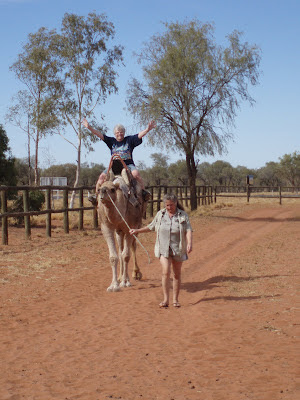 Beyond the beyond!
Kathy Hart photo
Posted by Gullible at 9:18 PM