We are waiting; they are reluctant. We are hopeful; they are suspicious. Curiosity guides us; they are propelled by instinct. “We” are tourists wanting to watch them; “they” are Little penguins trying to reach their burrows safely.

We sit on pink or green blankets brought from our hotel in downtown Melbourne. Simon arranged with the concierge for a couple dozen blankets to be available to us. When I left the Mercure Hotel entrance and crossed the sidewalk to the waiting coach earlier this afternoon, I wondered what passers-by thought of the stream of us exiting the hotel, blankets in hand. Mass blanket theft?

Now, in the minutes before it is too dark to see, I smile at the thought. If those pedestrians live in Melbourne, they know exactly what we are doing with all those blankets. We have placed them on the cold concrete and asphalt tiers of the spectator stands at Summerland Beach on Phillip Island. I choose a seat on the risers, but abandon it in favor of leaning against a concrete bulkhead next to the rope that keeps the spectators confined to certain areas. At my feet are tiny penguin footprints in the sand.
Almost full dark now, I begin to suspect that this is the one night of the year that they won’t come back. We all watch the water’s edge, right where the gentle surf effervesces into white froth before it begins to recede from the sandy beach. I think I see movement there, but
nothing appears.

The Little penguins cross this beach each night en route to their
burrows in the sand dunes beyond. Julia Hart photo


The park service turns on floodlights and we can see the beach better. We wait for some time.

A white spot appears against the inky blackness of the water. Then another and another. Soon I count a dozen white spots. The first group of Little penguins is huddled at the water’s edge, the light illuminating their white undersides. They have been to sea feeding, some for days or weeks at a time. Now they are returning to their colony burrows to feed their young, or just to be home.

Some minutes pass as the group summons enough courage to make the trek across the beach to the vegetation on the dunes. Several false starts are made and with a flurry of flippers they plunge back into the water, then gather together once again on the sand. These birds believe there is safety in numbers. It is not the human spectators they fear, but animal and avian predators.

I mentally cross my fingers, silently urge them on. I scan the sky, thinking it is surely too dark for eagles, then remember animals that hunt in the night. Suddenly they make a break for it, waddling quickly across a dozen yards of gently inclined sand, and reach the dunes safely. The theme music from “Chariots of Fire” swirls in my head. One penguin lags behind, his distress at being alone obvious.

I ask the ranger, who is there to make sure humans stay quiet and in bounds and do not use flash photography, about the slow penguin.

“I got a good look at its legs,” she answers. “It’s okay, it walks okay. It’s just fat.” She tells me the penguins feed alone at sea, then gather a hundred yards offshore when they want to return to their burrows.

Soon more groups are mustering up and down the beach. After almost two hours we start to leave. One group of penguins has been unable to make “the” decision for some time. It has been in and out of the water a dozen times, and it is still there as we climb the steps to the boardwalk. It takes only one to turn back and the whole group will follow. 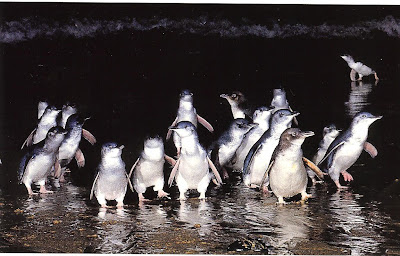 Picture from postcard by © Scancolor, Australia. Unauthorized photography is not allowed at Summerland Beach.

All around us in the full darkness we hear caws and barks and chirrs. Penguins are scattered throughout the rolling dunes, standing next to the low vegetation outside their burrows and chatting with their neighbors. Others are alongside the dimly lighted boardwalk, unafraid of the dozens of humans passing by or stopping to watch.

A bit further up the walk, a group of people are gathered at the rail. A man calls his wife over to watch. “Ew-w-w-w,” she exclaims as she sees an X-rated penguin propagation spectacle occurring in full view.

The night air is alive with penguin calls. They may have been afraid to cross the beach alone, but they are not hiding in their burrows now. Everywhere we look there are penguins, all of them vocal. Some have to waddle as far as a mile and a half to return to their own burrows.

Almost a half million visitors come to this site every year to watch this Penguin Parade. The smallest of the seventeen known varieties of penguins, Little penguins are found only in the Southern Hemisphere, mostly along the southern coastlines of Australia and New Zealand. They appear to be about a foot tall, but the largest males can grow to sixteen inches. Instead of black, their feathers are an indigo blue. Adults weigh around two pounds, and barring foxes and cats and perils of the deep, have a lifespan of about six years.

Blankets under our arms, we walk back to the visitor’s center, through the gift shop, and out the front door towards the dark parking lot where our motor coach awaits. As we leave the building, we see a sign that warns drivers to look under their vehicles for penguins before starting or moving them.

Our group is quiet on the long ride back to Melbourne. Some nap, others take in the night skyline of the city. We are comfortable and reassured in our silence. We have seen the Little penguins safely home and all is well with the world.