The China Journals, Chapter 4, To Go or Not to Go? That is the urgent question.

I don wanna go. (That's me, writing with a cold. I'm in the worst first days of this cold.)

Tonight, at the un-gawdly hour of 12:30 a.m., I am to board a plane for Phoenix where the temps are in the 80s, awful weather for someone who's coughing, sneezing, and wiping her nose so much it's already sore.

I don wanna go. I saw my doctor Wednesday and he didn't think there was any problem. I recounted the awful horrors of high altitude sickness that beset me in Tibet. He gave me a prescription for Diamox, which is supposed to help my blood's oxygen-carrying capacity, or something. I was hoping for a doctor note excusing me from gym class.

Okay, I'm exaggerating. I did have some problems in Tibet, but I refused to let them stop me from anything other than one dinner and one Tibetan dance lesson. Migraines do not mix well with food smells and loud music.

Nonetheless, at the appointed hour I shall board the Alaska Airlines jet and head for my Grand Canyon adventure. I figure I'll be well enough by next mid-week to somehow attain the upper side of a mule and ride down a steep trail to below sea level, where I will overnight at Phantom Ranch. Follow that with ten days of hiking in and around the Canyon.

In the meantime, all I want to do is crawl back into my nice soft bed, blow my nose one more time, take a giant swig of Green Death (Nyquil), and sleep until sometime next month.

Instead, I need to change one more battery in a smoke detector, hoping that is the one that beeps when I'm out of range, climb up on the roof and install a new rain cap on the wood stove chimney, then drive a hundred miles to Anchorage and wait for the plane.

I don wanna go, but I will.

And, speaking of going, I'm going to tell you one of the few jokes I can remember:

Q: Do you know why beer goes through you so fast?

A: Because it doesn't have to stop to change color.

Now, that's something to keep in mind if you're a Westerner traveling in Asia, because "going" can be challenging in Asia. 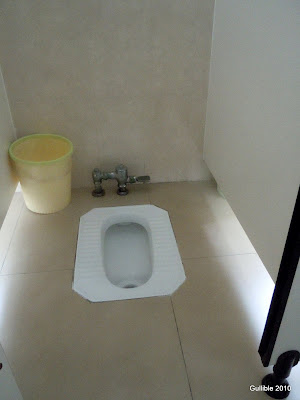 This one, in a public restroom with a full-time attendant, was spotless. You'll notice, however, the absence of toilet paper. Either you supply your own, or there is one dispenser at the entrance to the restroom, so you'd best plan ahead. 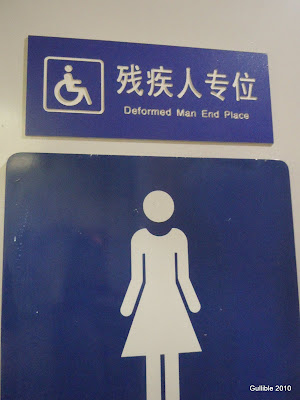 Usually, you'd find one or two stalls with Western-style fixtures. 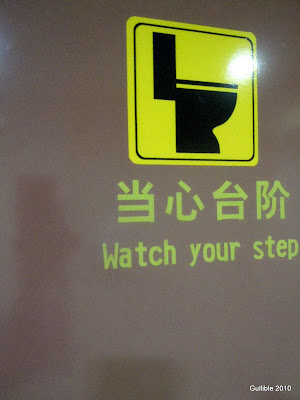 But most of them were Asian-style: 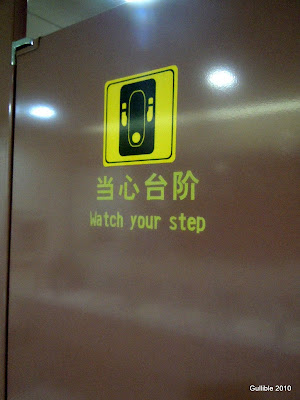 I didn't have a post like this in mind when I took these pictures. I took them because of the "Watch your step" warning, which is one of three things our guide always said. The other two were "Road Scholar! Road Scholar!" and "Take all of your belongings!"

Then I noticed the diagram on the Asian stall that showed which direction to point your feet.

Hah! So where do the Chinese have their signs made if not in China?

Some restrooms were much more primitive--sorry for this one, but this is the reality of traveling in outback Tibet. 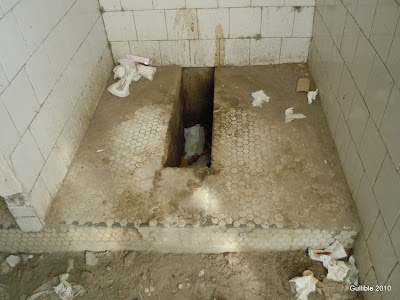 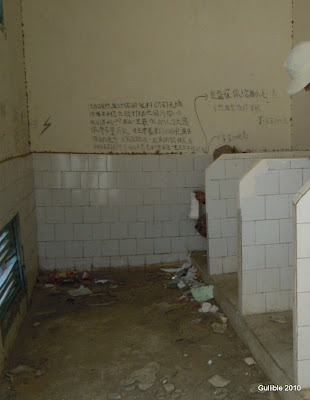 Or this one below. Women to the left, behind the wall but still in view of the main highway, and men to the right behind another wall. That's it--just behind the wall. No facilities. Nice dog, but no enclosure, no stalls, no Western or Eastern porcelain. That wasn't a problem for me, raised in rural Alaska where there are any number of girl bushes around. The rest of my group, I'm proud to say, took it all in stride--unlike some fancy-pants gals on a trip to Japan where I first encountered Asian toilets. I thought the in-floor fixtures made sense. 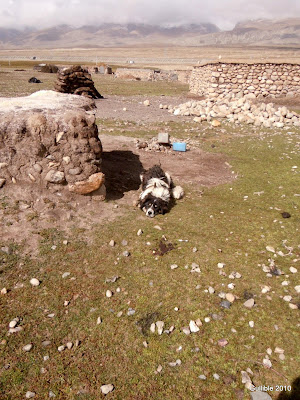 And while we're on the subject, here's part of the winter's fuel supply for one family. 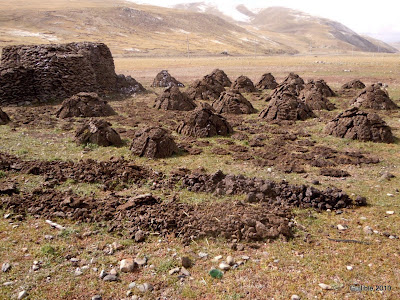 Yak and cattle dung, dried in patties and artfully arranged. Some of the arrangements were quite elaborate. This was in the high plains (13,000 ft.) of Tibet. You'll notice there are no trees.

This is the sidewalk directly across the street from Tianamen Square in Beijing. These inserts in the sidewalk cover "toilets" used when large numbers of soldiers gathered here. 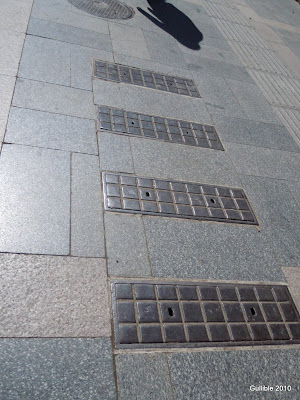 Now, Beijing has a number of public toilets located around town. They are in varying degrees of cleanliness, just like you'd find in the U.S. 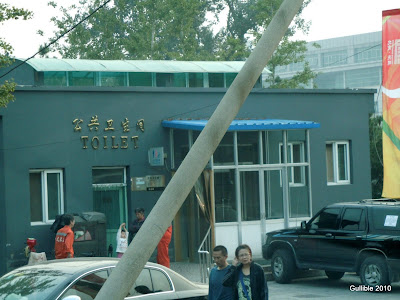 And, of course, as you've been taught, you must always wash your hands after going to the restroom. 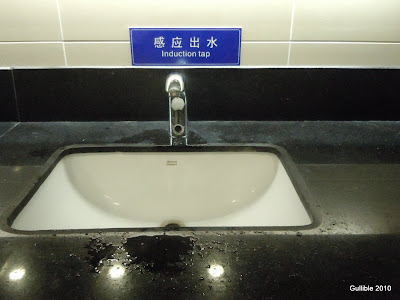 Did you catch the sign above the wash basin? 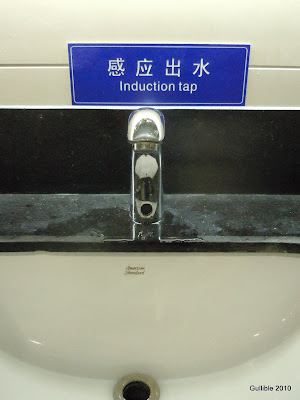 I gotta go. I mean, I have to go up on the roof and install that new rain cap on the chimney.

(Some day I might want to apologize for this post, but right now I have to go blow my nose.
What did you expect here? A travelogue?)
Posted by Gullible at 2:30 PM