By the Light of the Moon

I was trying to photograph the waxing crescent moon and its current neighbors Venus and Jupiter last night, and was having trouble getting the moon to show as a crescent.  This is what I mean; 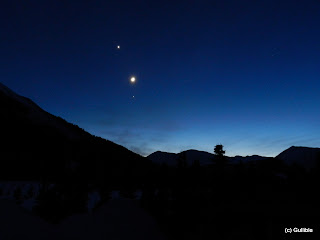 That's a crescent moon, just a lower sliver of it, but it looks like a fuzzy white blob.  Above it is Venus and directly beneath is Jupiter.  I played with various settings on the camera, to no avail.  I thought the problem was that it was still too light and decided to wait until later. 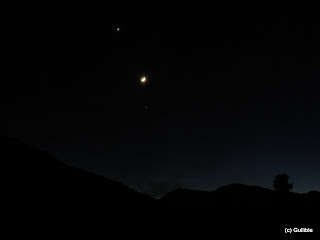 That helped a bit, but not enough.  A few dozen attempts later, I gave up trying to get a silhouette of the landscape in the photo, and zoomed in. 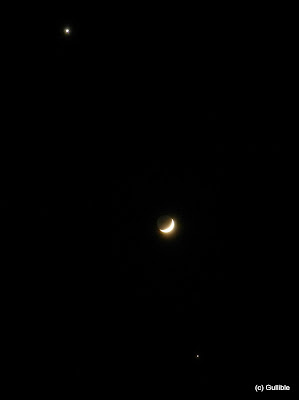 Better, but still not what I was looking for.  I zoomed in as far as my 36 power zoom would go, and got this: 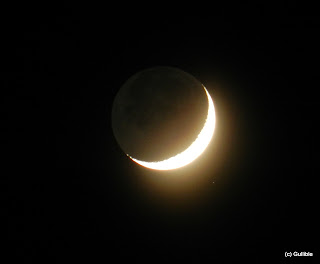 Cool picture but I would have liked to have Venus and Jupiter in there also.  By this time, they were spreading farther apart. 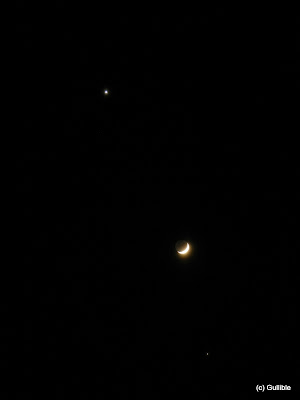 I'm told that with a backyard telescope you can see Jupiter's moons.

For a colorful article about this celestial conjunction, which occurs roughly every quarter century, see this story in the Washington Post:

http://www.washingtonpost.com/blogs/capital-weather-gang/post/curtain-call-for-moon-venus-and-jupiter/2012/03/26/gIQApzD4bS_blog.html
Posted by Gullible at 11:18 PM