Day and Night in My Part of the World

Late this afternoon it emerged from behind a descending ridgeline to warm my home again.  It won't be long now and we will have sun from early morning until almost midnight.

Just as this welcome miracle was again disappearing behind the mountain, I pulled out of my driveway and headed for Seward.  Iron Lady was playing at the Liberty Theater, and I wanted to see Meryl Streep in the role of Margaret Thatcher, the role that won her an Oscar this year.

When I left the theater at 9:30 and started out of town, Venus and Jupiter were shining brightly above the mountains to the west.  The town of Seward nestles at the foot of those mountains, and climbs as high up their feet as it can, which really isn't very far.   Maybe far enough to avoid a tsunami, unless it's a really big one.  I stopped and took one photo.


In the notch between one mountain and the next, I spotted a crescent moon.  I needed a place high enough to see the moon, dark enough for a good shot, and away from the power lines in town.  I found it on the other side of Resurrection Bay.


In order to get that photo, I had to climb part way up a seven foot high snowbank and stab my tripod into the snow.  This is one of the photos I took of the moon as I was unintentionally sliding down that snowbank. 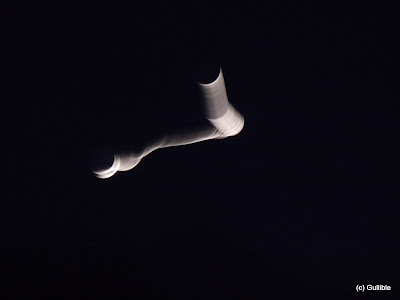 Okay, one more photo and them I'm off to bed.