The storm that whipped through here last night did no damage in this area that I know about, but then I haven't been off my own grounds today.

Anchorage, in particular the mountains that rise above the flats of the city, got hit with winds over 100 mph.  One amateur meteorologist reported a gust of 131 mph.  Trees were knocked down all over town and the power was out to thousands of customers.

The only thing I see different around here are two pots of calendula that are suddenly missing blooms and stems with no trace of them across the gravel drive.  I suspect their disappearance might be related to some fuzzy black and white long-eared critters that have taken a liking to my yard, except they have heretofore not shown any interest in them. 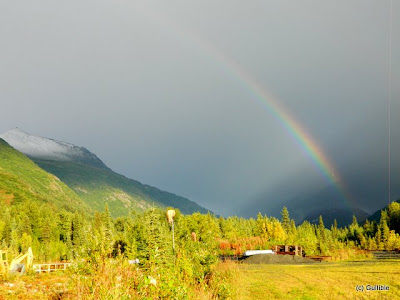 Right in the middle of former president Bill Clinton's speech to the Democratic National Convention, the sun broke through the clouds and put on a rather dramatic display of light.    (There's a political metaphor in there somewhere, but I haven't quite figured it out yet.  It could go either way.)

It also revealed something I am definitely not ready to see. 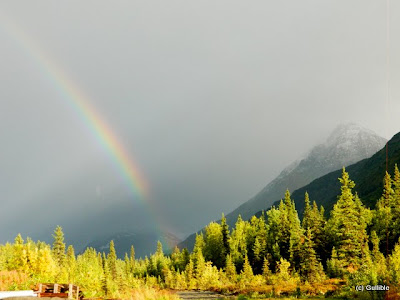 Here's another view of that same rainbow, showing the other side of the valley.  Notice anything?

If you still haven't figured it out, here's one more: 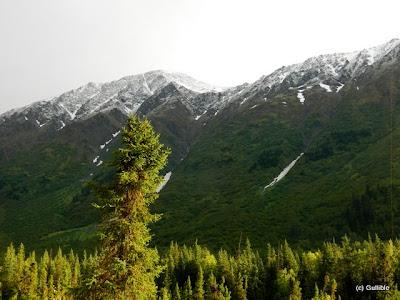 The crazy neighbor kid up the highway is cheering, hoping we get more of it, dreaming about being up there "shredding" it.  Knowing him, I have no doubt he'll be up there this weekend, doing exactly that.

Email ThisBlogThis!Share to TwitterShare to FacebookShare to Pinterest
Labels: weather