The screen saver on my laptop is a slide show of the photos I've imported into Picasa.  On and on they roll, lasting less than ten seconds each, bits and pieces of my daily journeys.

Sometimes only the top of a carrot in the frosty ground shows, making me wonder how it is that I never noticed that particular part of the larger photo.  Most of the time, the whole photo is there but often only a piece is shown full screen.  I suspect this is due to the resolution, and I shoot at a high resolution.

For the last three days, one particular photo appears to be stuck.  It was taken on a rainy, foggy day last fall when the Stormbird was motoring into the near entrance of Halibut Cove, carrying me, the US mail, and numerous passengers.

On shore is Clem Tillion's nearly completed lighthouse with a partial red roof and the siding of choice in Alaska--the white high-density polyethylene fibers called Tyvek, originally made into house wrap but now found in many applications.   A year later, I haven't been to the cove and have no idea what color Clem chose for his new building.

I haven't bothered to check on why the slide show stopped at this particular photo, mainly because I like it so much.  So, there must be a reason and perhaps it's so you can see it , too. 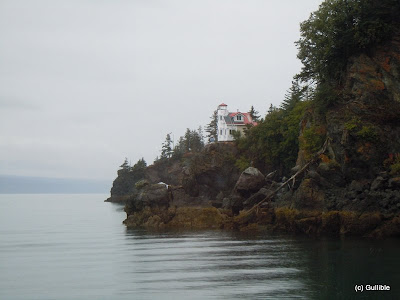 Full screen on the monitor, it's breath-taking.
Posted by Gullible at 11:51 PM