I know, I know.   It's been a week since I promised part two of the Tour Guide posts.  I have an excuse:  I've just had the busiest ten days of the year.   Everything had to happen all at the same time, so I've been putting out fires and slaying dragons every day.

All that salmon I brought home had to be processed and, of course, my vacuum sealer locked itself shut and refused to cooperate.   That necessitated a trip to Anchorage to buy a new one, which, of course, isn't operating correctly and will require another trip to Anchorage.   I also had some work done on my house, and I was the gofer for that project.

Now let's get back to the Tour Guide thing.   When last I left you, Linda and I had just left Hope and headed thirty miles south to Cooper Landing.  We were going on a two-hour float trip down the aqua-colored Kenai River.

Last summer the owner of Kenai Drifters gave me a card for a free float trip.   I was just now getting around to using it.   We arrived a bit early and had time to look around.   As we lounged around the campfire site, a mama merganser paddled by with a brood of ducklings.   A BIG brood of ducklings and I can't believe they were all hers. 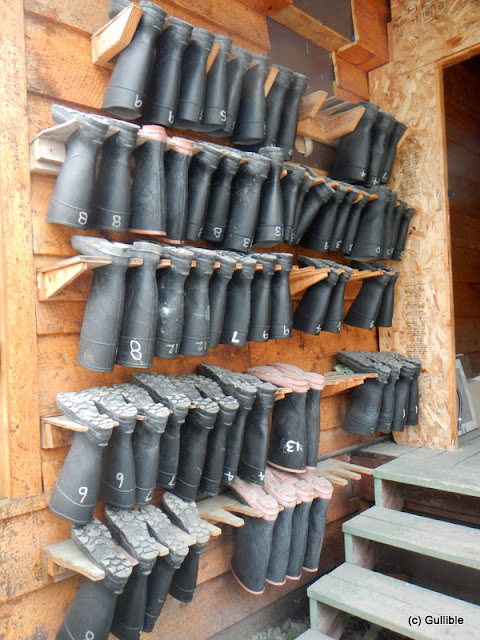 We booted up, donned float vests, and launched at the boat landing. 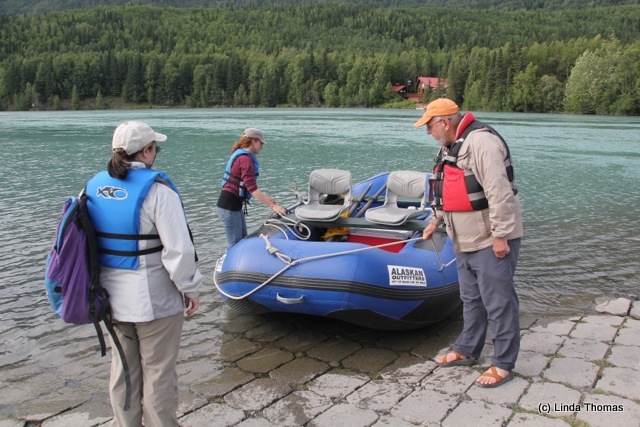 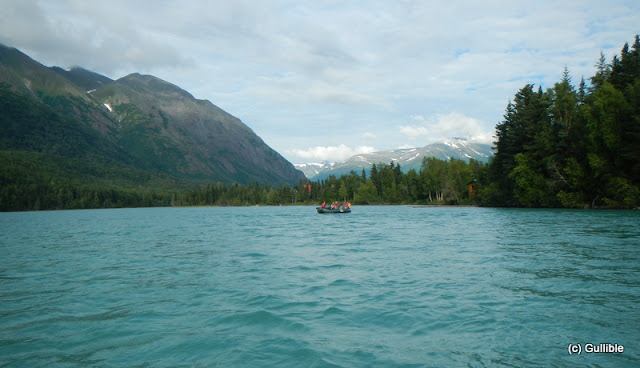 A bend in the river prompted this bit of local lore:   This bend used to be called Dead Man's Bend until Princess Cruises bought adjacent property and built a big lodge.  They didn't care for the name Dead Man's, and renamed it Princess Bend.   So, I decided to mediate and dubbed it Dead Princess Bend. 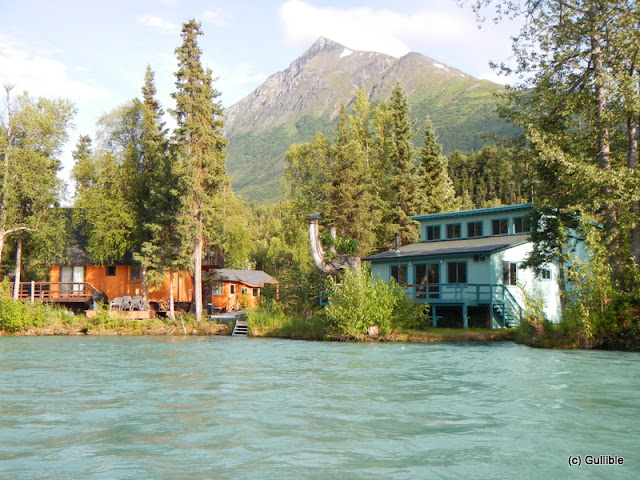 Lots of nice homes are located along the river, including one exclusive lodge where, we were told, the nightly fee is a thousand bucks.   It is not pictured above.

Then we came to a spot where we had a choice.   We could float the calm water or go for a little whoop-de-doo.   We four passengers voted for the whoop-de-doo, that little spot of white water below.   It was pretty easy because the river is high right now due to the hot weather and snow melt running off the mountains. 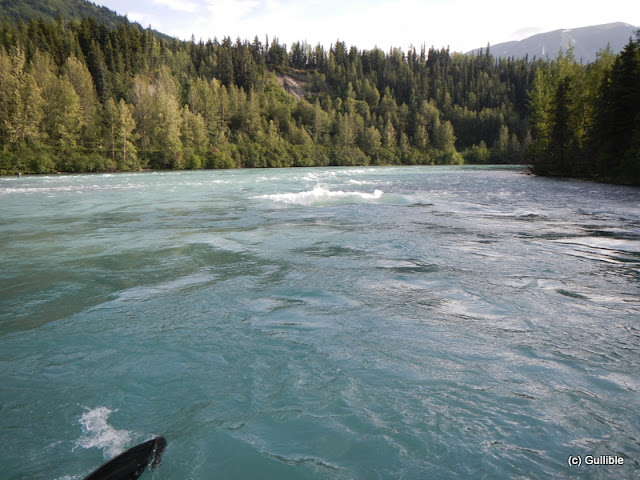 Farther downstream we had another whoop-de-doo.  This one was a little livelier and as we hit it, I looked down into a three-foot eddy.

Ah.   No adrenalin for Linda. 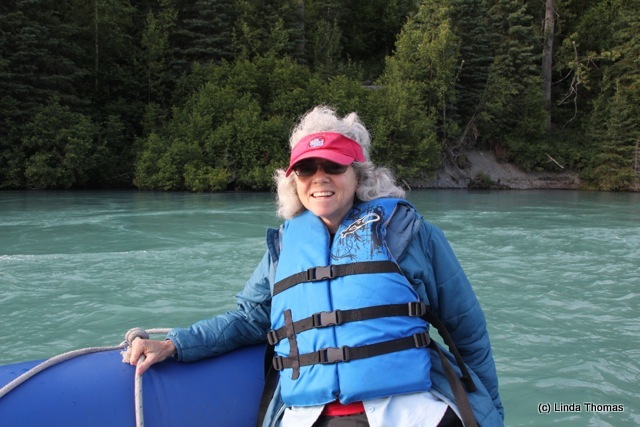 Eventually we reached our haul-out spot, which was the boat launch where a small ferry hauls fishermen back and forth across the river.   It's located where the Russian River flows into the Kenai, all of which is famous for massive runs of sockeye salmon, bears looking for a quick meal, and combat fishing.    That, if you don't know, is what they call fishermen elbow-to-elbow, all vying for a prized sockeye.   Hooking each other, tangling lines, arguing about who caught the fish and who caught the line--all the while on the lookout for bears.

Our float was, all in all, a relaxing way to spend the evening, especially with dinner at Sackett's afterwards.

One note:  I still have my free float card.   I asked the owner if he wanted it and he just waved me off.  "Don't you want to punch it?" I asked.   "Ten punches and I get a free float?"


Okay, that's what we did the first day.   Linda had plans in Seward for the second day and on the third day, I would meet her again and we'd visit Exit Glacier Park in Seward.    Check back.

(to be continued)
Posted by Gullible at 2:29 PM