The Martinet, The Hooker, and The Vamp 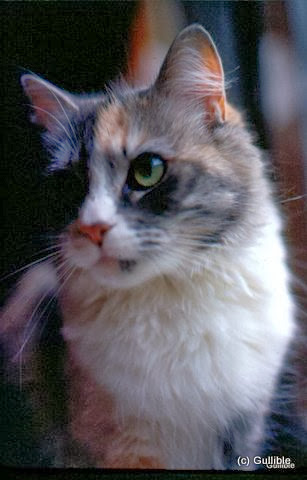 I was looking through some old photographs recently and came across a shot of my female cat.    She looks regal, sitting upright, her head turned to gaze at something in the distance.   I think of it as the “Mona Lisa” shot, though da Vinci’s inscrutable lady looks at the artist and thus at us.
long-haired calico cat.

I love this picture of her, her long white whiskers sharply defined, the temple hairs perfectly coiffed to cover her ears, and the small gray spot on her lower jaw.  She was a fine companion, quite affectionate, and even tolerant of the various birds that lived in her home—the Cockatoo that tried to shoo her from the lap she was curled upon, as well as the orphaned magpie that sneaked up and pulled her tail while she slept.

She was not always so tolerant.

Much is made of the felines’ independence and aloofness, their disinclination to submit to discipline.   This cat, who responded to the highly original name of Kitter, took discipline in another direction.  She became a martinet.
The subjects of her strictly-enforced discipline were two part wolf huskies, whelped during the early winter months in the late 1970s.  Two of these pups were exceptional, a male and a female, both blue-eyed, and I decided to keep them.   When prospective buyers were scheduled to arrive, those two pups went into the house, hidden from view so the buyers couldn’t see what they were missing.

To keep them in one place until they learned their house manners, I put the youngsters down on the couch or in an easy chair and wasted my breath by telling them “Stay”, not something a playful seven week old puppy is inclined to obey.  When I returned to the house after the visitors left, I always found the two pups exactly where I’d left them.

And then I began to notice something.   Their nervous demeanor and panting was not the result of a warm house or being a couple feet off the ground.   No, that demeanor was caused by none other than a Calico Martinet crouched on the floor in front of them, casually switching the tip of her tail back and forth and back and forth.  One false move and Kitter’s front claws met the offender’s nose, thus gaining her the nickname “The Hooker.”

Incredibly, this lasted for months, far past the time the two pups should have been allowed on furniture, but when we tried to have them lie on the floor, Kitter wouldn’t allow it.  I will confess this all became a game with my husband and I, who should have been the adults in the room.   We would depart to the den and call the dogs and then watch as they did everything possible to obey without setting foot on the carpeted floor.

This involved leaping from the couch or chair to the entrance of the room where we waited, always followed by The Martinet with claws.   My retired fifteen-year-old lead dog was exempt from her discipline;   Kitter seemed to understand that.


Then came a fateful day when the pups were a few months old.   The Martinet was betrayed by her own body and she transformed into The Vamp, all because she came into estrus.   No longer The Hooker, she terrified the dogs by rubbing against their legs, cuddling up to them as they lay on the floor.  They would look at her out of the corners of their eyes.

Then my husband made the torture worse by telling the male, Mugsy, to give Kitter a kiss.   Mugsy would try to lick the cat’s face without pointing his muzzle in her direction, still afraid of those sharp claws.

The estrus passed and she became The Martinet again, but it was all for naught.   The dogs were no longer afraid of the cat.   Instead, what had once been flight for life became a game.  Kitter chased the dogs into the den; they chased her back into the living room.

And they lived happily every after.   Well, not quite.   They are all gone now and I miss them terribly.