The Morning After Pill

There's an old come-back that goes something like this:

"Wow!   What happened to you?" says one person to another who looks like he's been in a prize fight.

"Hey, this is nothing.   You should see the other guy," says the batteree.

I AM the other guy!

Now, isn't that pretty?   This is the morning after I had cataract removal surgery on my left eye.   The right eye is swollen in empathy or something, because I had the same surgery on it ten days prior.   The right eyelid didn't swell anything close to this.

That morning after pill would have been an Aleve or Advil or Tylenol, but I didn't need it, appearances to the contrary.   There was no pain or discomfort, though I might still have been under the lovely effects of a sedative they gave me prior to surgery.

That's what they do, hook you up to an IV, then slip you a mickey, and while you're totally out of it, they give you a shot to numb everything.   I think it's through the eyelid, which is why there's so much edema.  The eye itself looks fine; it's the wrapper that's swollen.

And, boy, can I see!   My trifocals are now obsolete.   Whoopee!

I was allowed to take off that blue shield the morning after and see what I could see.   Not much, actually, not until I put a cold wet wash cloth on it for a half hour and could see through a slit.

For those of you considered cataract surgery, this is the absolute truth:

The very worst part of the whole deal (after overcoming my initial panic about the whole idea of someone messing with my eyes) was the tape they use to tape the eye shut and hold that blue thing in place.   It itches.  The eyelid itches.   It's just paper tape, but the eyelid itches.  Get through that for a night and the whole thing is a piece of cake.

And I even got a free pair of designer sunglasses to wear for the drive home: 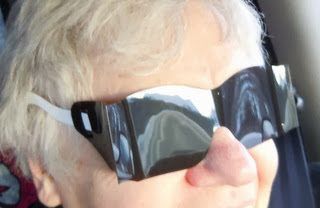