The Africa Journals, Ch. 52, The Fairest of All

Chapter 52
The Fairest of All

This cape is the most stately thing and the fairest cape we saw in the whole circumference of the earth.” – From the journal of Sir Francis Drake, on seeing the Cape for the first time, 1580

I am now in Cape Town, South Africa, and it is as fair as Sir Francis Drake said it was.   More populated than when he first saw it, to be sure, but nonetheless beautiful.

The victualing station (resupply station) started by the Dutch East India Company in the mid-1600s took root and for decades was the most populous city in South Africa, until a little gold and diamond rush near Johannesburg changed that seemingly overnight, dropping Cape Town to second, where it remains with a population around 3.74 million in 2011.


There are two ways to see Cape Town the best.   One is from the sea and the other is from the top of Table Mountain.  For those who have no desire to climb straight up, there is the Table Mountain  Tram, a decidedly more gentile and less sweaty method of ascent. 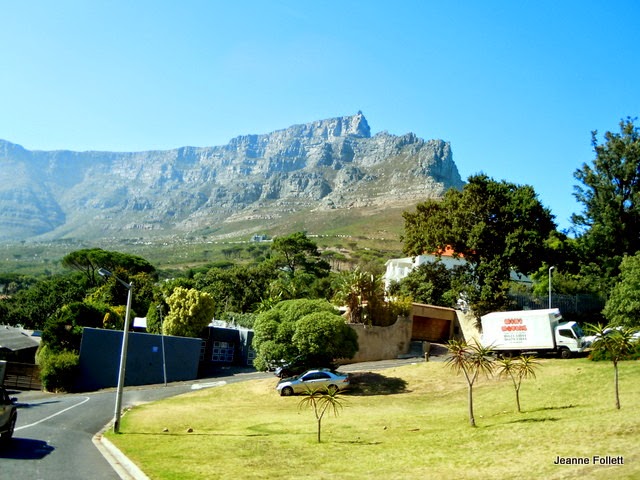 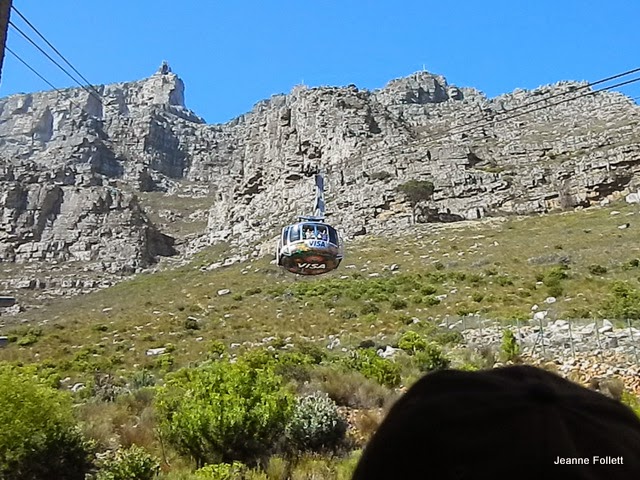 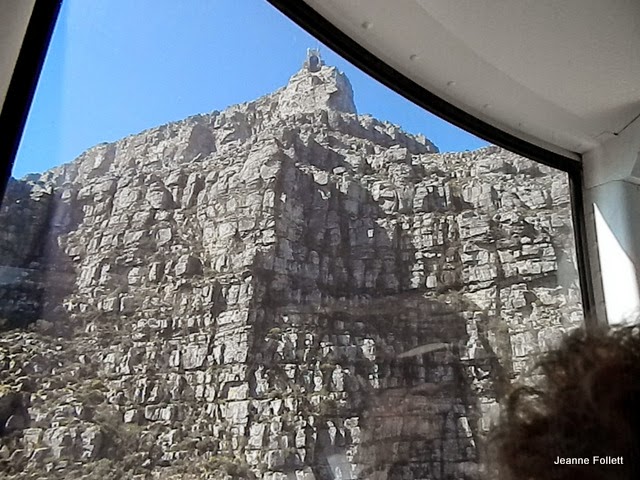 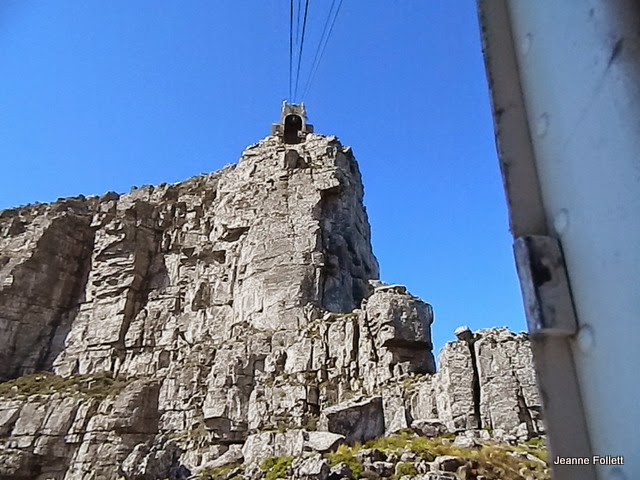 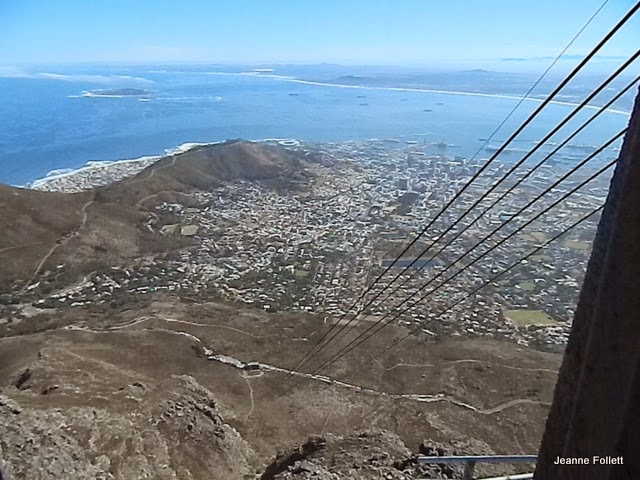 Table Mountain, along with its buddies Lion’s Head, Signal Hill, and Devil’s Peak, are at the northern end of a mountainous spine that begins at Cape Point on the Cape Peninsula.

Table Mountain is the most prominent landmark of Cape Town.  At certain times of the year, it is instrumental in creating a mad and damaging dervish called the Cape Doctor.  This south-easterly wind picks up moisture from False Bay on the other side of Cape Peninsula, blows through the Cape Flats near Cape Town, swirls around and runs head on into the escarpment of Table Mountain and then all hell breaks loose, along with everything else that isn’t fastened down well enough to withstand winds up to 160 km/m (100mph).

Imagine trying to hang onto your cap in that or prevent yoour car door from folding back onto itself.   The city adapts to these winds, though.  There are railings on certain street corners, said to have been installed not to block the way for pedestrians but for them to hang onto.   Some buildings have architectural wind deflectors on their exterior to prevent windows from blowing in.

And, there is said to be a fountain somewhere in town controlled by an anemometer.   When the wind reaches a certain level as measured by the anemometer, a device turns off the water in the fountain so passersby don’t get drenched. 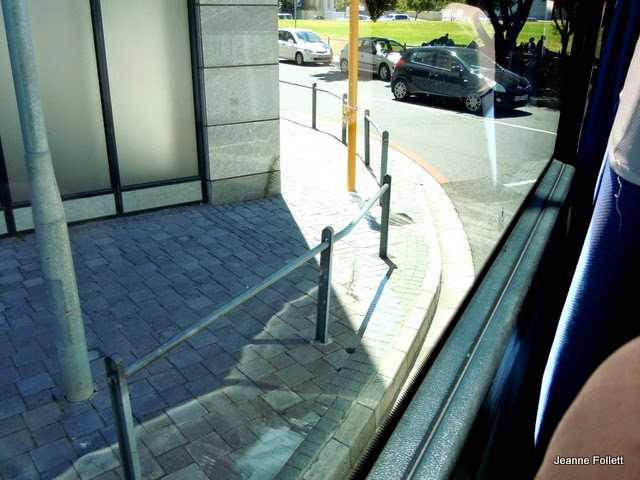 The folks that suffer the most are the squatters living in shanty towns, with homes made of tin and cardboard and scrap lumber.   Frequently you can see roofs weighted down with tires or blocks or boulders. 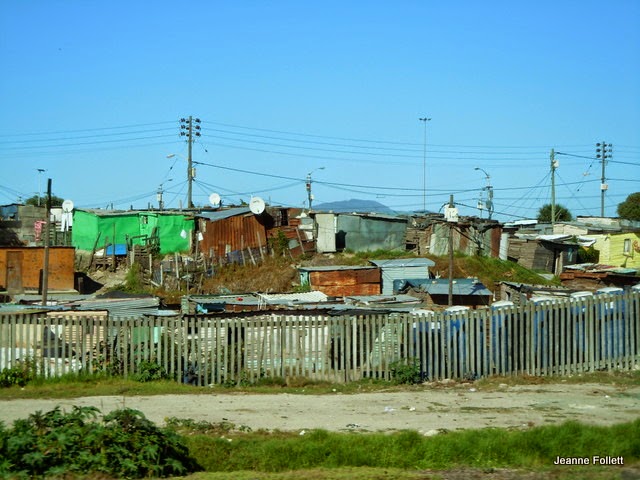 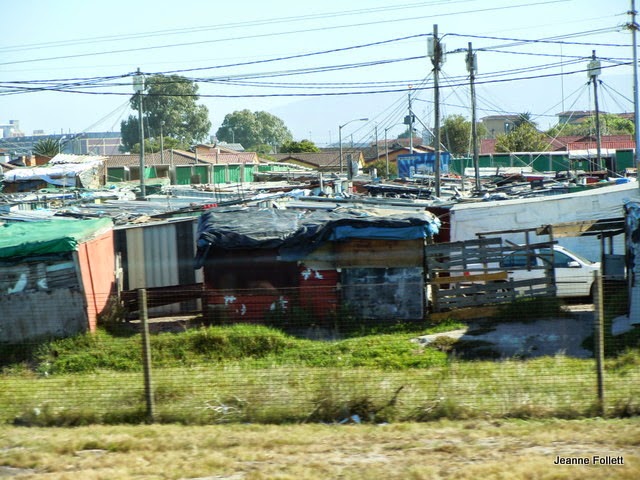 The Doctor actually performs a good deed while swirling around the city bowl because it cleans out all the pollution so the folks can start messing it up again.   All the damage it causes is just an unfortunate side effect. 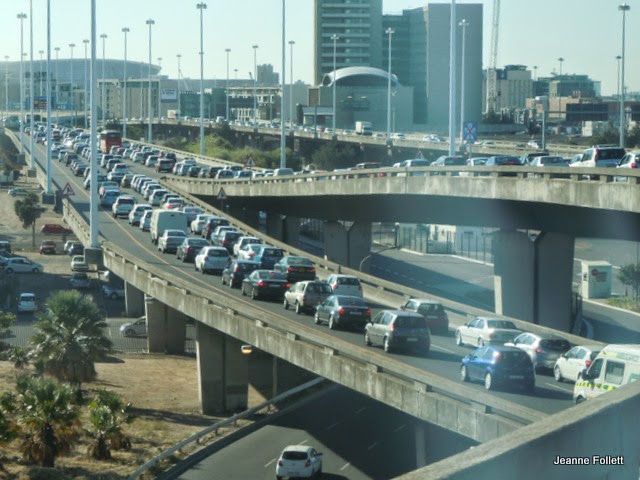 Ah, but there’s another effect of The Doctor.  That moisture it picked up in False Bay runs into Table Mountain and forms into clouds that cover the flat plateau on top and drips down its sides.
This is called the “tablecloth.” 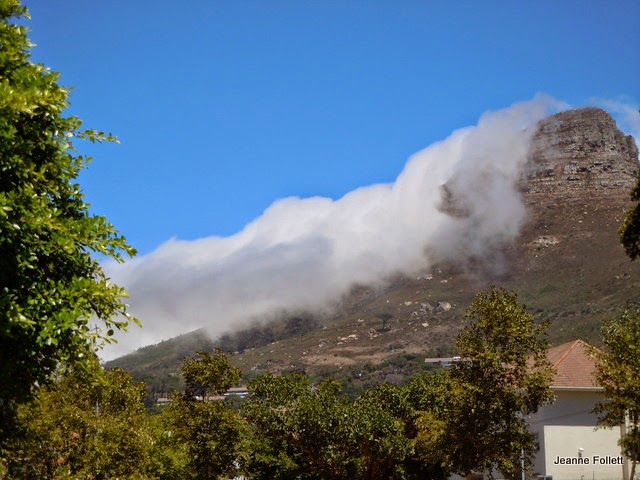 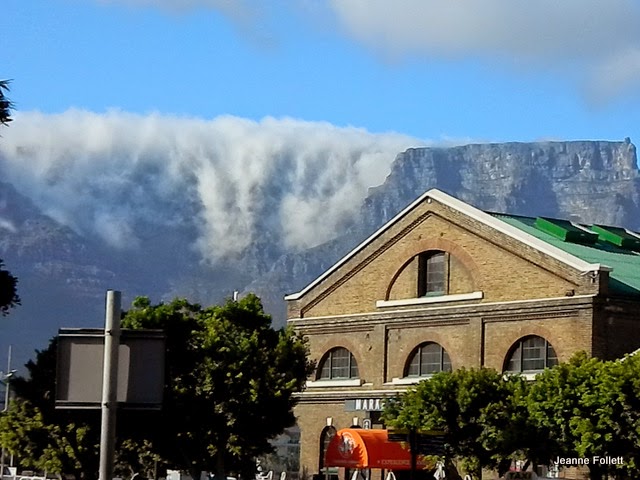 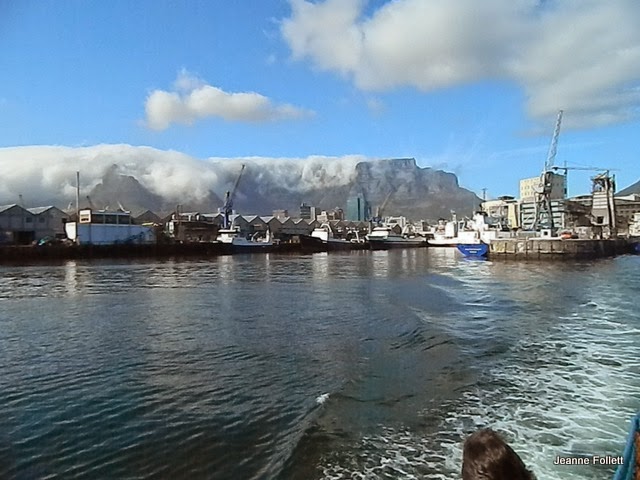 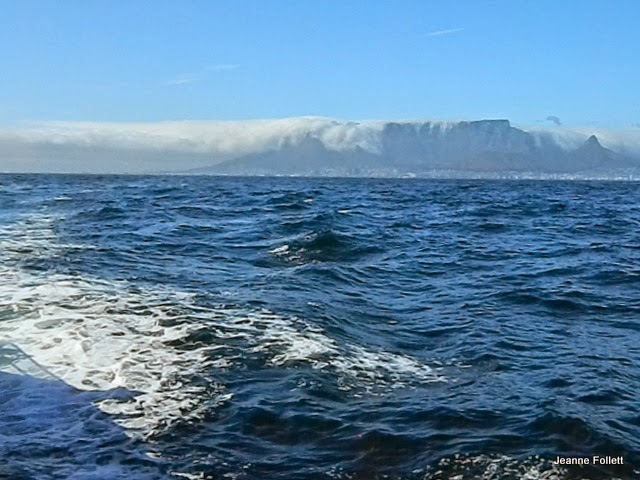 Up on top of Table Mountain, the view is fantastic. 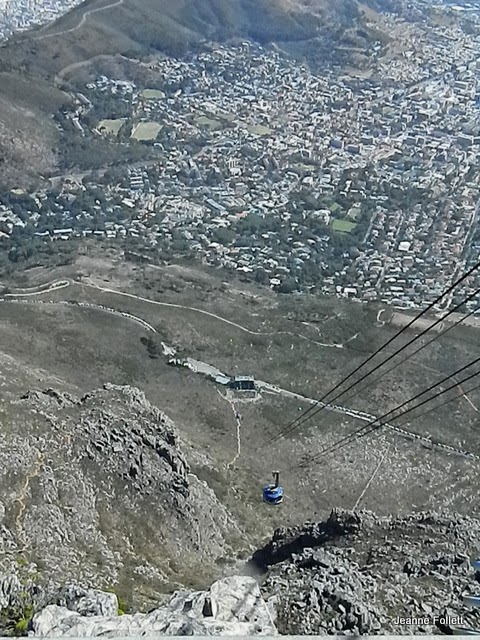 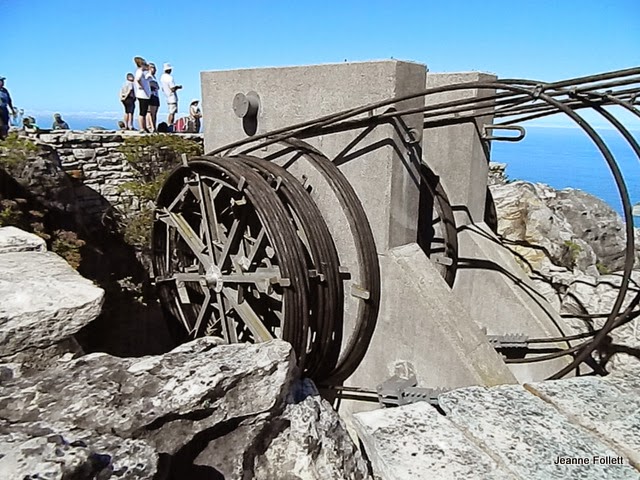 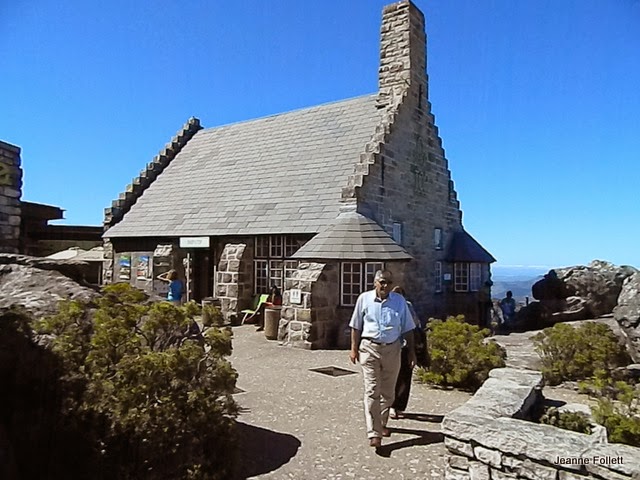 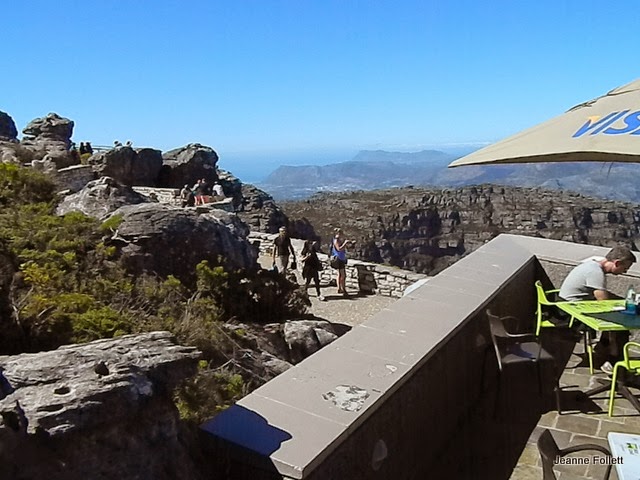 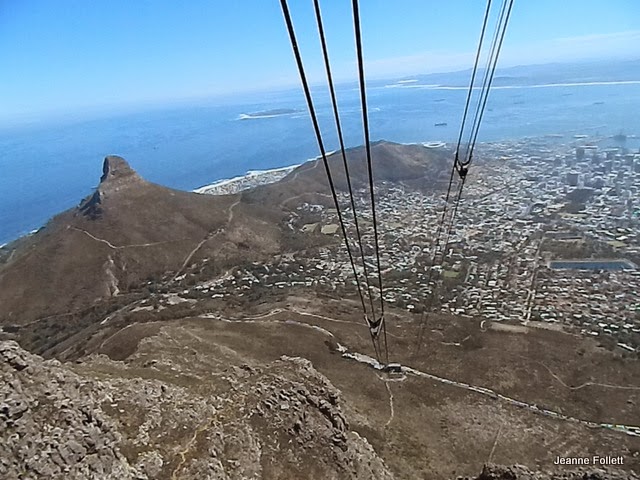 Oh, and there's also this sign in the upper tram terminal: 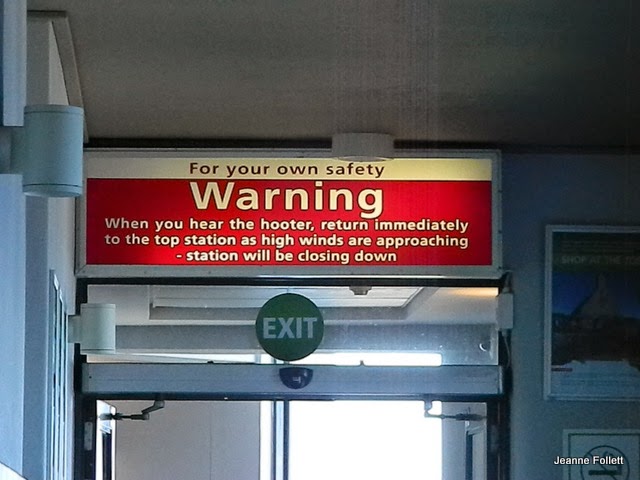 Of course, there's a much more interesting fable about the Tablecloth:

Table Mountain is flanked on the east by the legendary Devil's Peak. As the story goes Van Hunks, a pirate in the early 18th century, retired from his eventful life at sea to live on the slopes of Devil's Peak. He spent his days sitting on the mountain, smoking his pipe. One day a stranger approached him, and a smoking contest ensued which lasted for days. The smoke clouds built up and a strong wind blew them down towards the town. When Van Hunks finally won the contest, the stranger revealed himself to be the Devil (hence Devil's Peak), and the two disappeared in a puff of smoke. Legend says that the cloud of smoke they left became Table Mountain's tablecloth - the famous white cloud that spills over the mountain when the south-easter blows in summer."


Table tops in a cafe on Table Mountain: 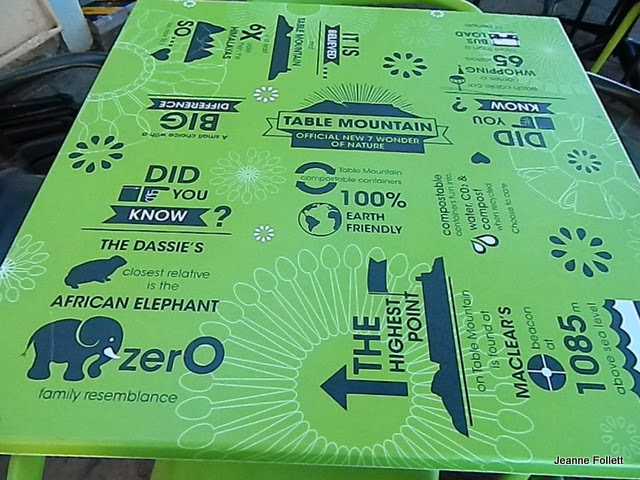 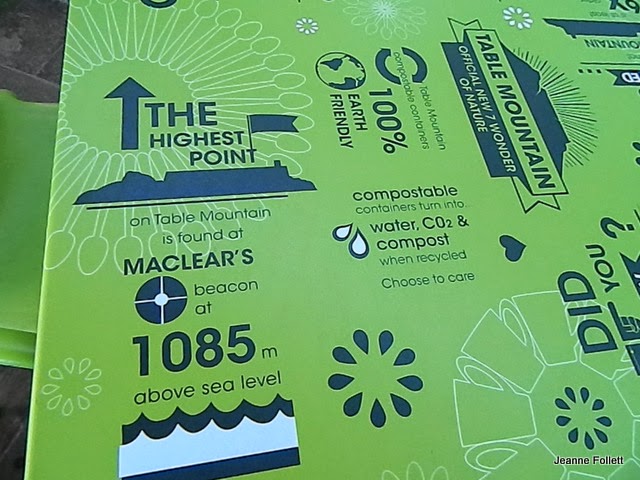 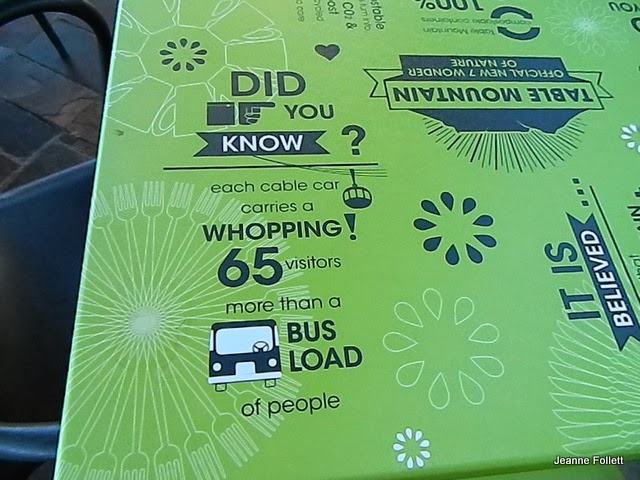 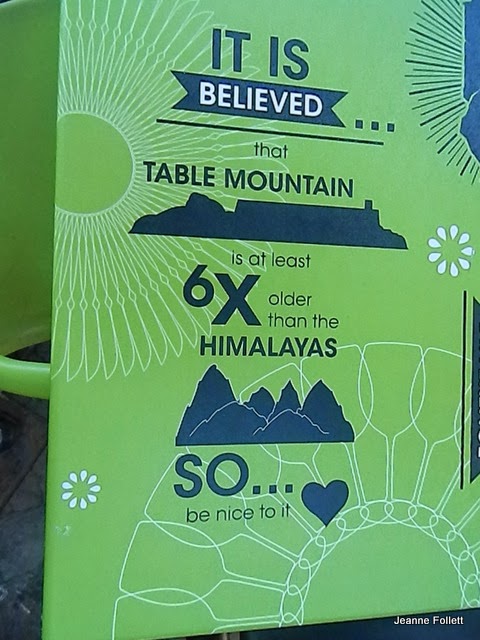