It is only in adventure that some people succeed in knowing themselves
– in finding themselves.” ~ Andrew Gide.


We have four days in Cape Town and my dance card is full.   Right now, though, I’m abandoned at the V&A Waterfront after an adventurous trip to Robben Island where Nelson Mandela and other political prisoners were held for many years.   There are no photos of the return voyage because, with spray flying over the top deck where I was sitting, I didn't dare expose my camera to salt water.

I can’t recall which entrance to the mall that the shuttle to the hotel would meet anyone who wanted to return.

I hurried around the vast waterfront tourist areas, searching for anyone from our group.   Then I braved the mall.  Good Grief!  Three stories high, crammed with shops and cafes and you-name-it.   I asked for directions to Entrance 4 and promptly got lost in the crowds and offshoots of that huge building.

By this time I had less than an hour and a half to get back to the hotel, get lunch, and be in the lobby before 2:30 when our guide would take us on an optional tour called “Cultural Connection.”   I had no idea what that was but I didn’t want to miss it.

When we came in from the Stellenbosch winelands yesterday, we drove around town in a brief tour meant to acquaint us with the city.   We went slowly past the Malay Section of town with its bright houses.   When Napoleon was marching across Europe and headed right for Holland, the Dutch ceded its interests in South Africa to England, supposedly for safe-keeping.

Upon reaching Cape Town, the English abolished slavery.   Not only were the native Africans freed, but also other foreign labor, including the Malays, who were given a section of undesirable land on the slopes of Signal Hill.  The British assumed the Malay would build proper English-style homes, white with green trim.

The Malay had other ideas. 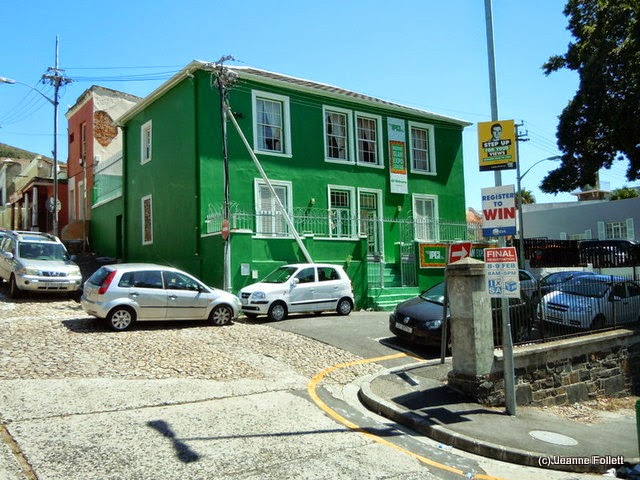 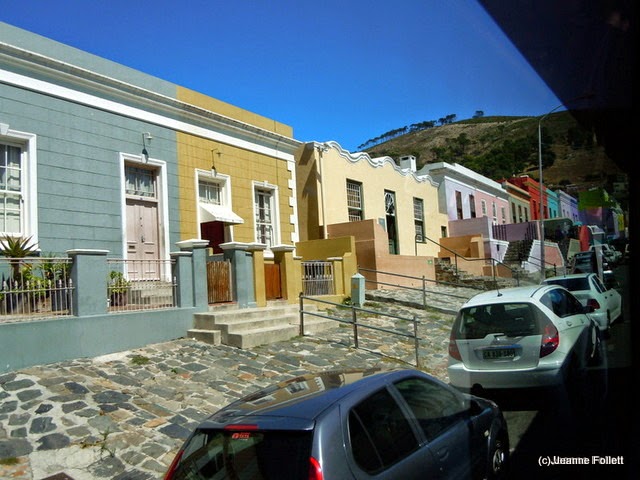 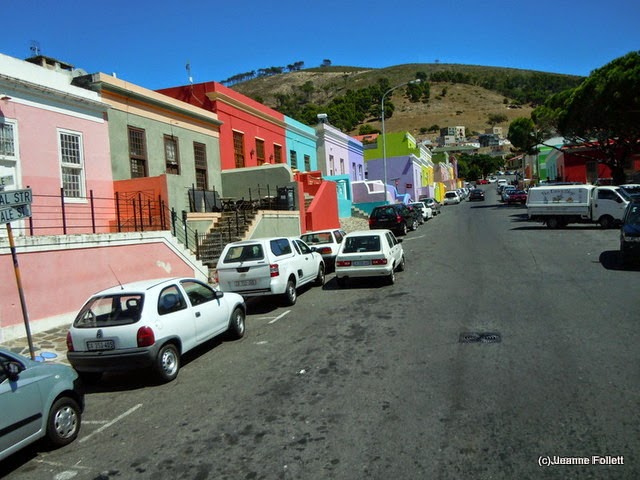 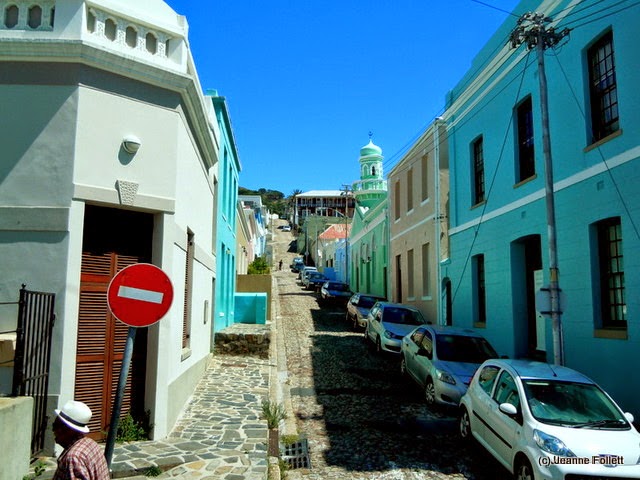 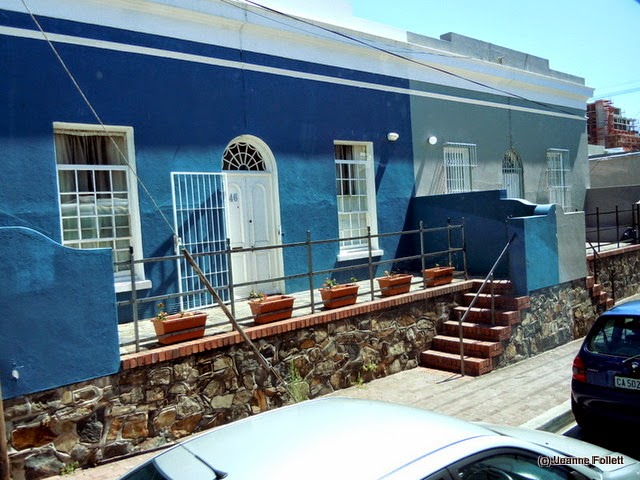 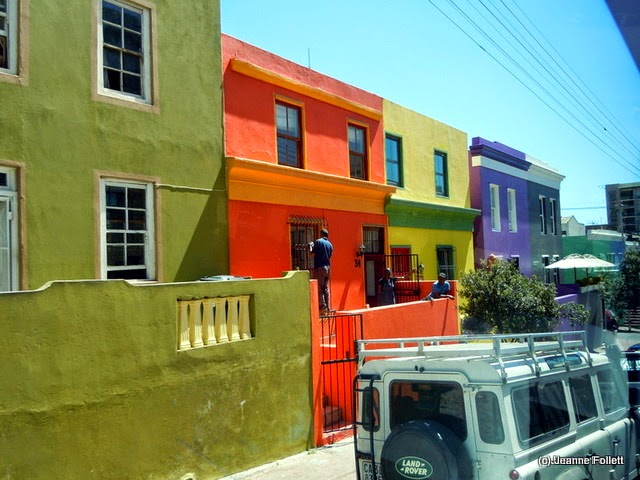 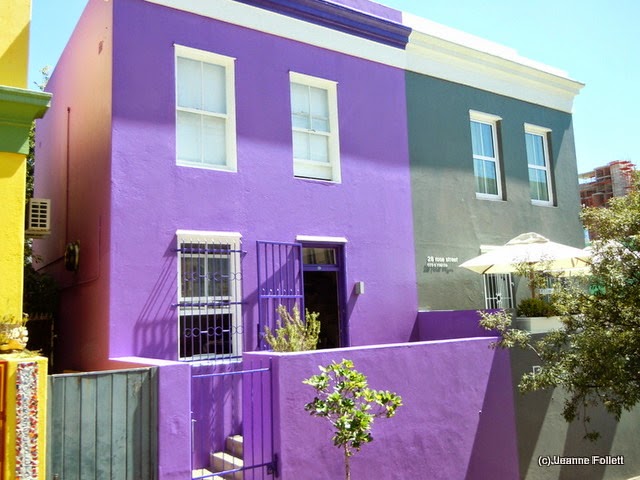 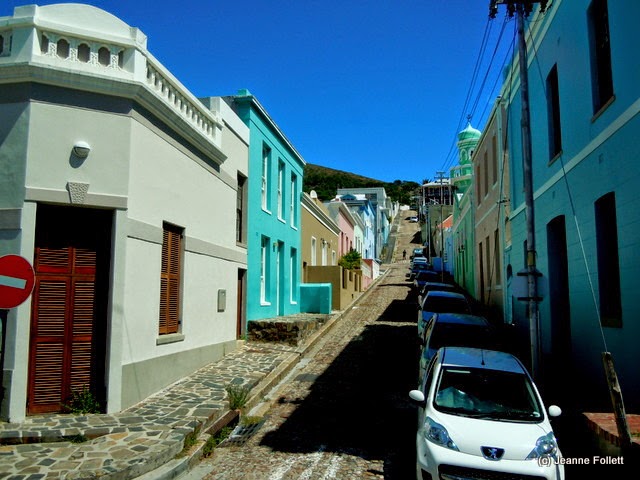 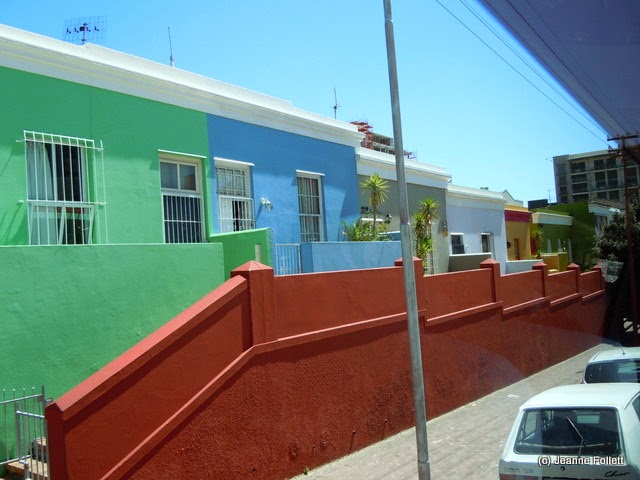 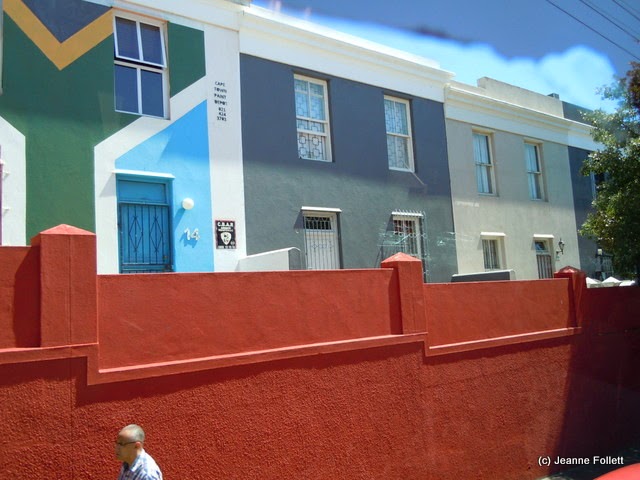 They painted their homes in the brightest colors they could get their hands on, their form of protest against the British.  Today these homes are iconic to Cape Town, high in price, and almost never on the market because they are passed down through generations. 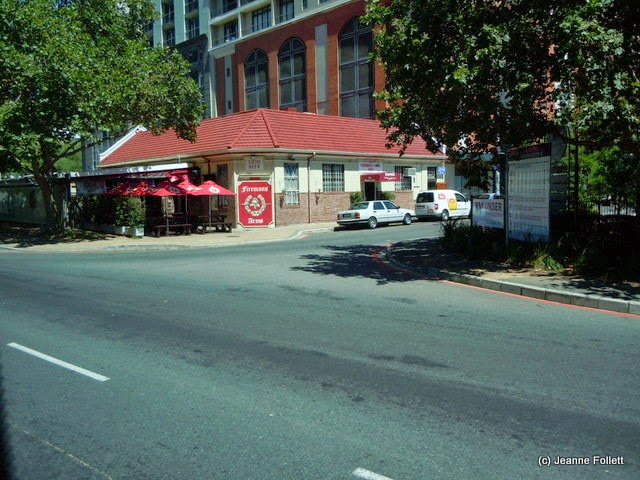 We’d also visited a jewelry factory and learned about diamonds.   We were taken into a room where diamonds were sorted and placed in settings.  The tour led to a jewelry store in the building, of course.  I made my way slowly through the long room and right out the door on the other end, my money intact.   Brian and I sat in the small ante room and ate complimentary cookies, waiting for the ladies to finish their shopping. 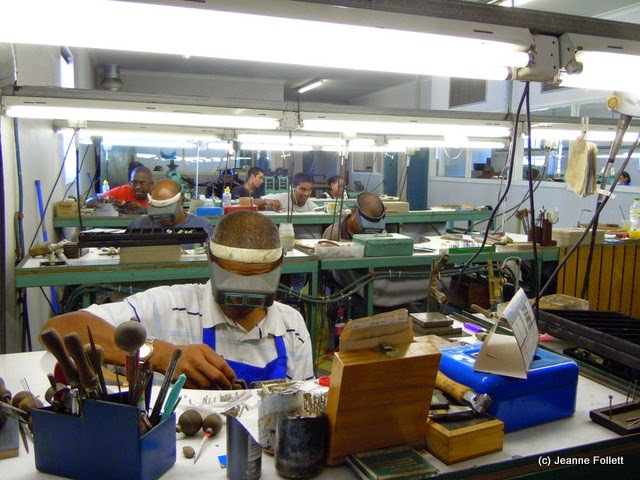 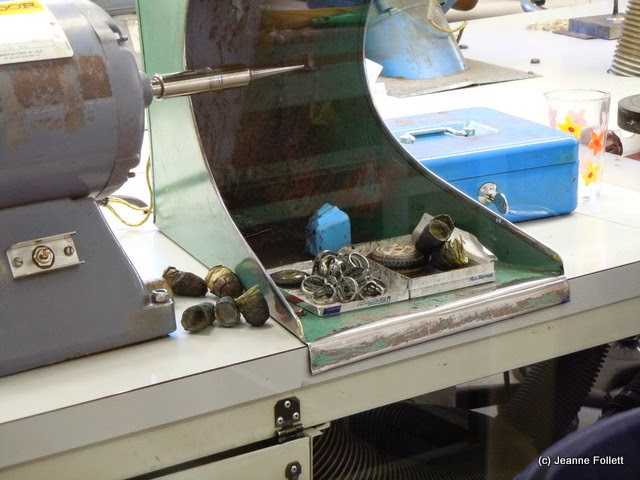 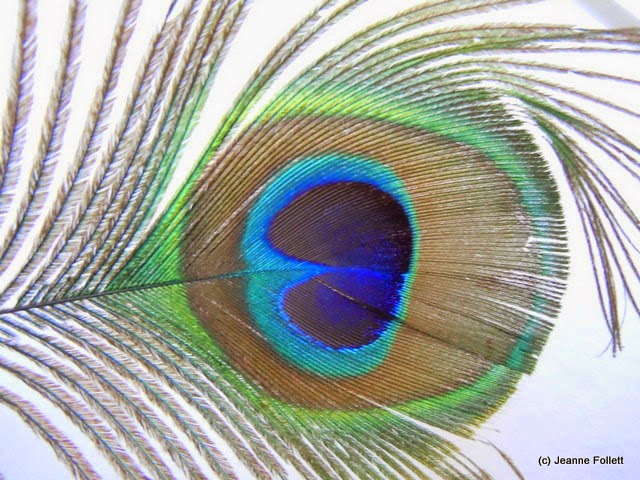 While I was wondering how to get from the waterfront to the hotel, part of the group was on another tour of a different jewelry establishment.   Just not my thing.

I looked for a taxi.   Traffic whizzed by me.   I knew the general direction of the hotel because I could see the waterfront cranes from my room, and figured it was between a mile and two miles from there, but I could have wandered for hours before I found the right street.

I saw a hot handsome young man sling a shopping bag over the handlebars of his motorcycle and approached him.   “Could you take me to the Cullinan Hotel?”

Disbelief washed over his face.   “With no helmet?”  “Are they required?”  “Yes.”   “Okay, thanks anyway.”   What a story that would have been, darn it.  I finally found a taxi stand and for a few dollars was delivered to the portico of my hotel, just in time for a flower delivery for the hotel. 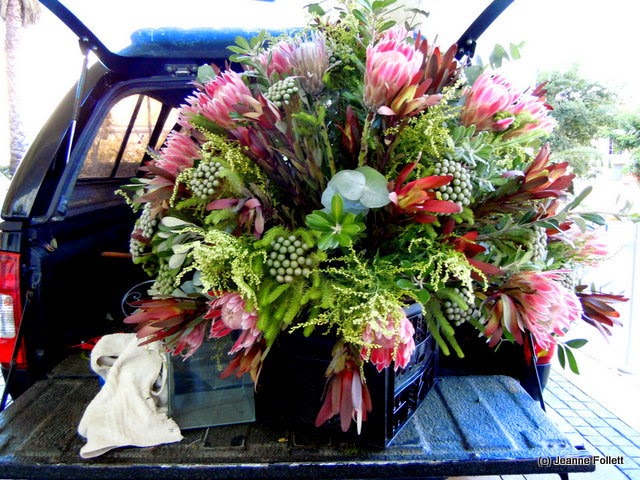 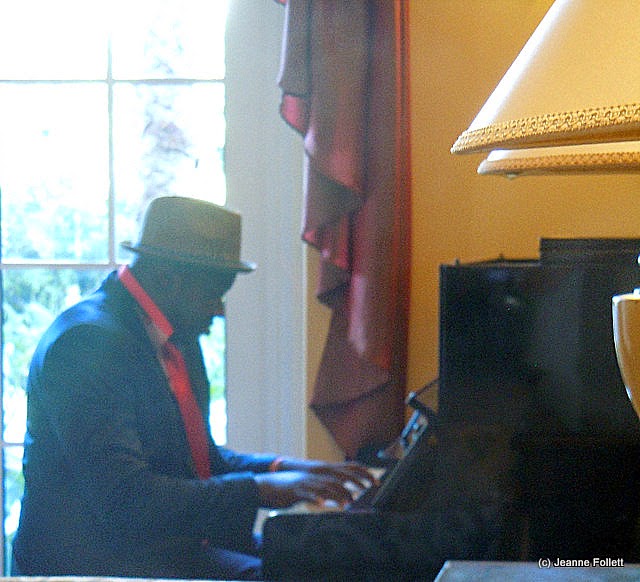 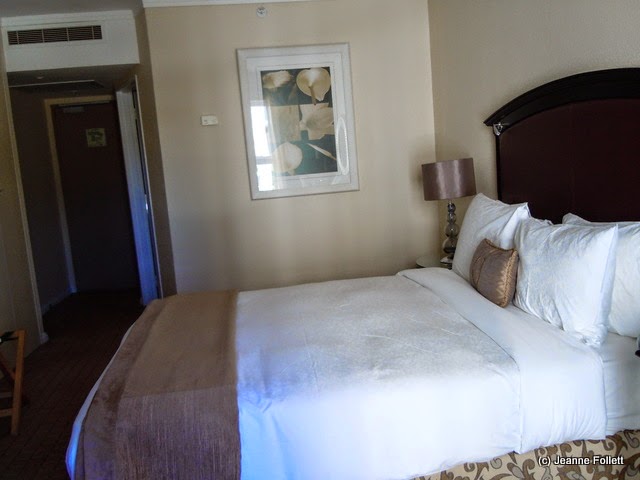 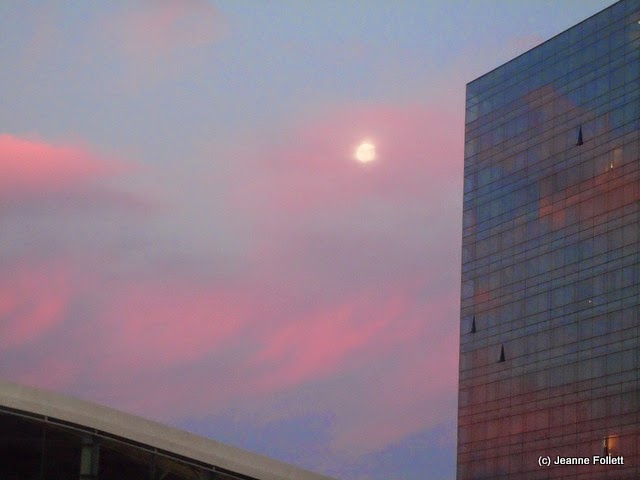 I had time to find a sandwich, an ATM, and still be PROMPT for my 2:30 “Cultural Connection.”   But first, I asked the lady at the front desk to call Brian and tell him I was safely back at the hotel.   I certainly didn’t want him to worry.

I made it a whole block from the hotel before I realized I didn’t have my ATM card with me, so back I went past a gauntlet of native African taxi drivers lined up along block, all of them out of their vehicles and talking with each other.   When I retrieved my card and headed for the bank again, I cut across a grassy square, thereby avoiding the gauntlet, which is how I found a nice sandwich shop where I could get lunch without mortgaging my home.  Egg salad sandwich and Coke Zero, for around $5.00.


I found out later Brian wasn’t aware I was “missing,” nor was he concerned.  “Everyone scattered when we got back from Robben Island,” he said.  “I assumed you were off on your own.”

Promptly at 2:15, I was in the lobby, ready for my "Cultural Connection."   I sincerely hoped it wasn't a trip to a museum.  I wanted to see living people going about their lives, not displays in a dimly-lit museum. 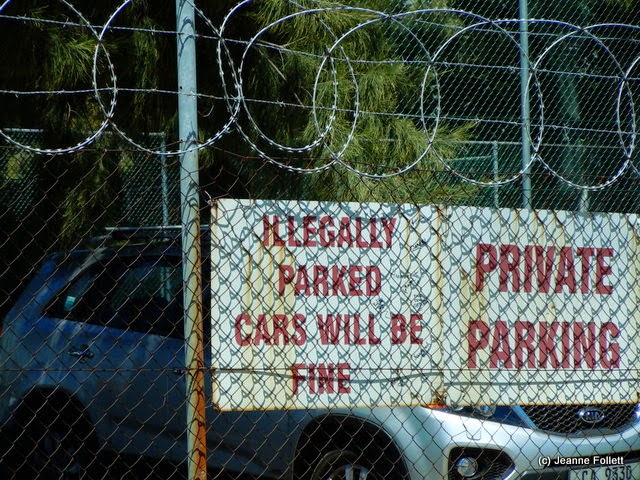