The Africa Journals, Ch. 55, The Cultural Tour, Part One

Chapter 55
THE CULTURAL TOUR, PART ONE

Brian joins us in the lobby of the Cullinen Hotel before our “Cultural Connection” tour and says our coach awaits.   Please don’t be a museum, I think.

I board the bus and the front row seat is empty, so I sit there.  This is the second time I have selected the front seat.  I usually sit in the back row because it is raised and I can see out both sides.  Please don’t be a museum, I repeat as I sit down.

Brian, who won’t be going with us today, introduces us to Desmond, our local guide for the day.  Please don’t be a museum.   I have no idea what to expect from this optional tour, but since I paid for it, I didn’t want to miss it.  I simply hoped it wasn’t going to be a long afternoon in a museum.   As I mentioned before, I wanted to see living people going about their lives and learn about them, not looking at artifacts and dioramas in a dimly-lit museum.

It was a museum.   But first, we drove by the former City Hall, slowed briefly in traffic so we could see the small balcony from which Nelson Mandela made his first public speech shortly after being released from prison. 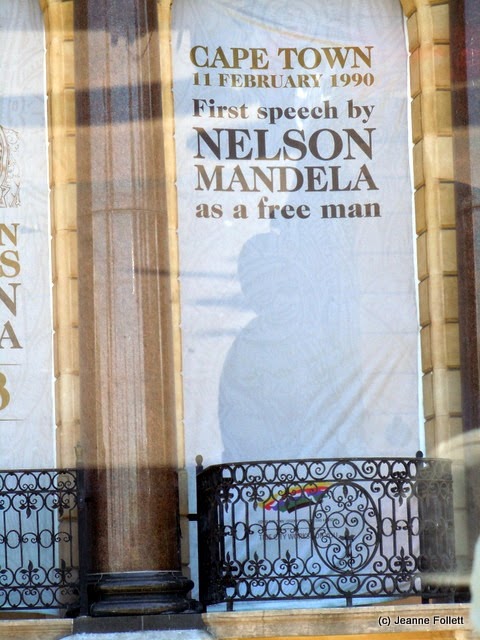 Desmond talks about this, saying he was there that day.  He pointed to a large paved square across the street, and said it was jammed with people waiting to hear Mandela.

According to him, Mandela spoke of the brutal Apartheid regime and talked about revenge.

There was utter silence for a long minute, said Desmond.   And then Mandela said there would be no revenge, that everyone needed to learn to work and live together.   The crowd cheered, said Desmond, because nobody wanted to fight for revenge.”   This is how Desmond remembers that electrifying day.*

Next was a stop nearby where the original star fort built by the Dutch East India company was relocated.   It originally was built during 1666-1679, along the shore of Table Bay, but moved further inland in over a period of years during land reclamation. 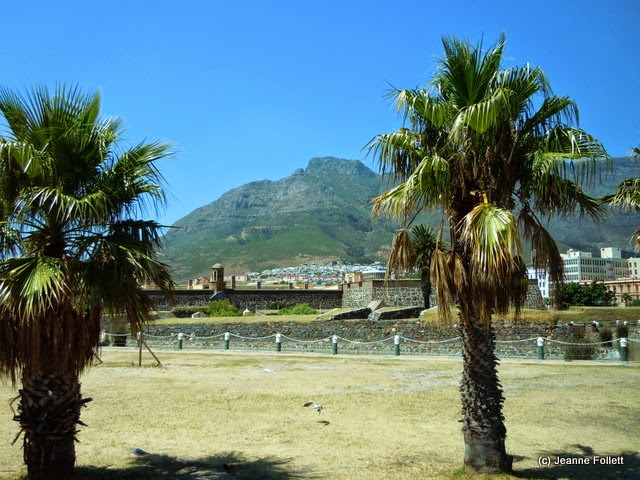 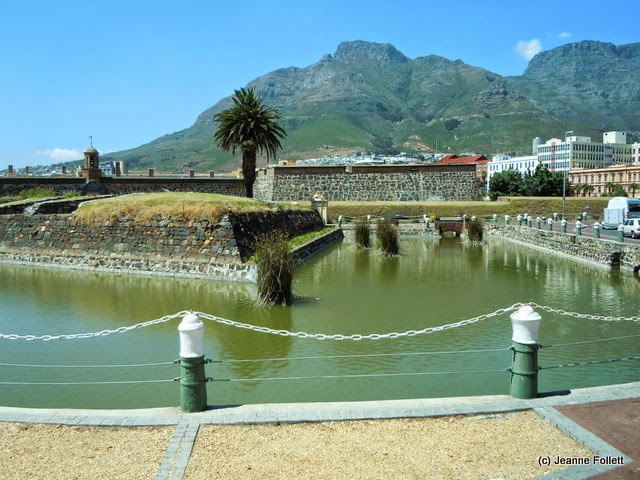 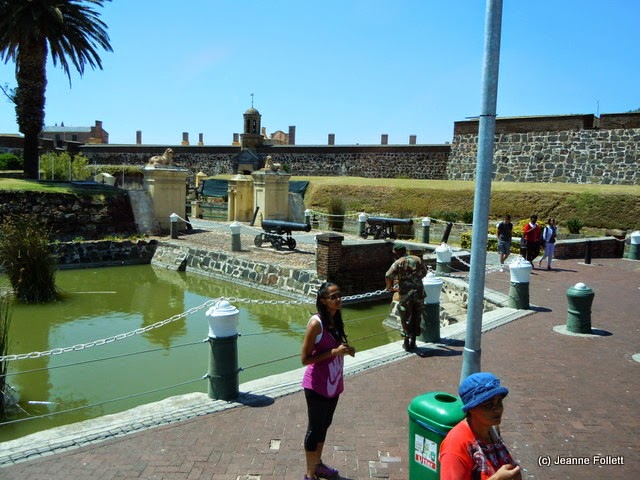 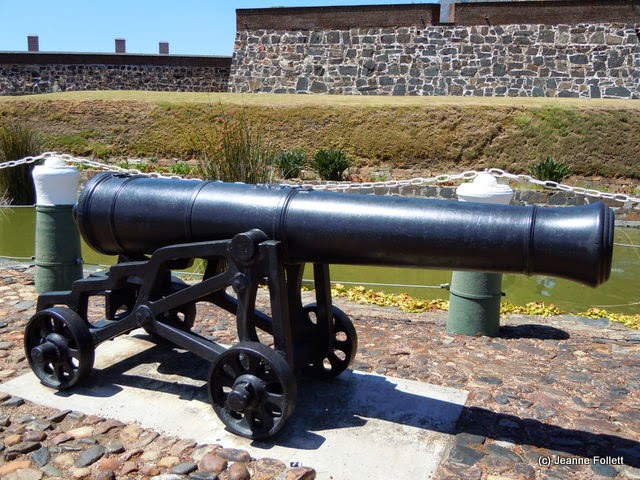 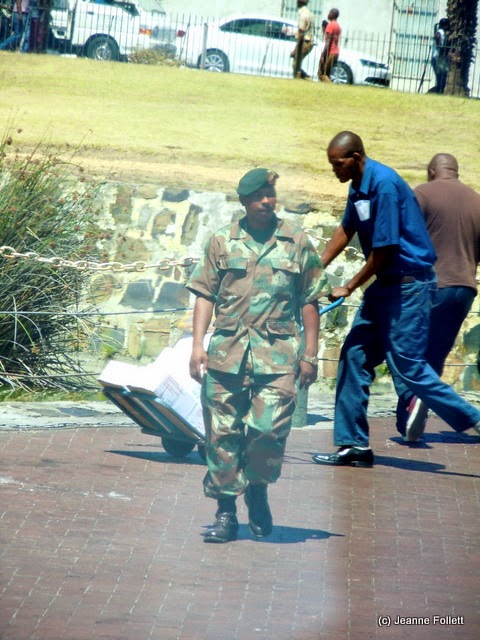 We have only a few minutes as our coach is parked illegally and the fort is now the center of military operations in Cape Town.

From downtown Cape Town, the coach gains altitude and passes by a large open area of shrubs and the occasionally chunks of broken concrete.  This, says Desmond, is District Six, a notorious black eye on South Africa’s face.

One of the most onerous things the Apartheid government did was make blacks and Coloureds  live in undesirable areas.  As the white population grew and needed more room, the government took away the land where those people had settled and forced them to relocate to even more undesirable areas.

Homes and shanties alike were demolished and the occupants moved into the Cape Flats areas and other place farther away from town.  Only a few buildings and churches were left, and one of them housed the District Six Museum.   A group of schoolchildren were seated in the main room of the museum, listening to an African.   We walked around the inside perimeter, looking at signs and photos and displays of what was once a thriving,  culturally-vibrant neighborhood. 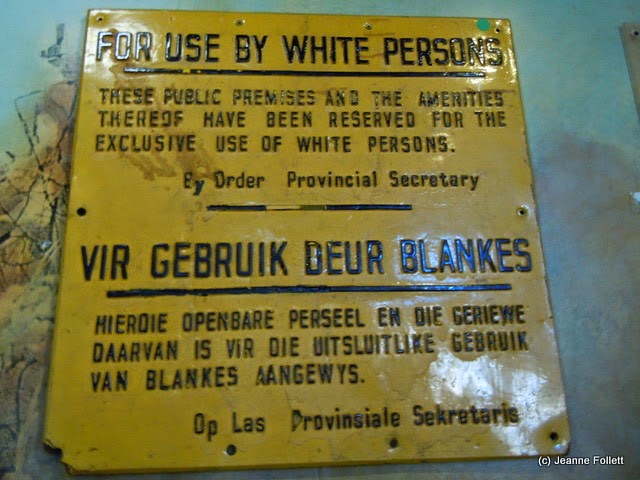 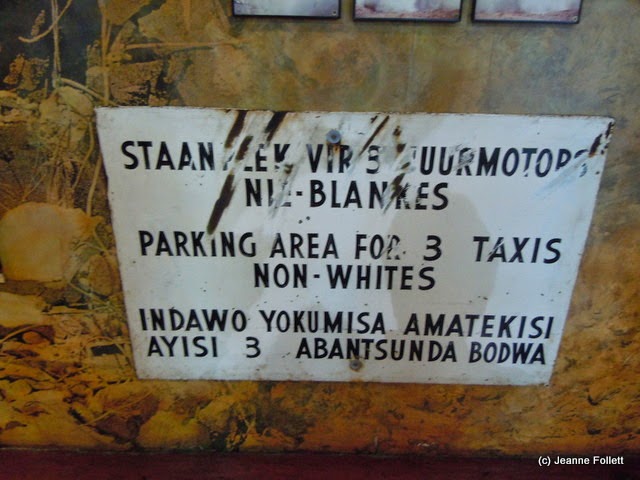 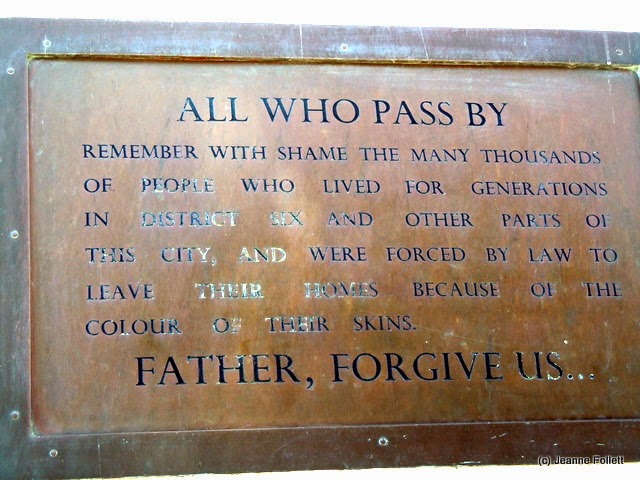 Brian told us later that when the city government offered the confiscated lands for sale, no white person would purchase a lot, a form of protest against the Apartheid regime.  Right in what should be some of the most valuable land available, the empty fields of District Six are an ugly reminder of an ugly era.  A few homes were built by the government and offered to former residents.  More building of this type is planned.

We re-board the coach and the driver turns towards one of the places where the African natives and Coloureds made an attempt to salvage their lives, the nortorious Cape Flats.