(Part four of the Cultural Connection)


Shebeens and tsotsis [an African tribe] go together. They have a long cultural heritage where alcohol and gentility have not usually been closely associated.—Michael Nkomo

Our large motor coach turns onto a pot-holed, sandy road and stops by a corrugated tin shanty that appears no different than all the rest that lean against each other for support.   Desmond escorts us inside, and we sit on long benches along two sides.  A single dim bulb lights the interior, but the doorway is open and the intense African sun provides plenty of light. 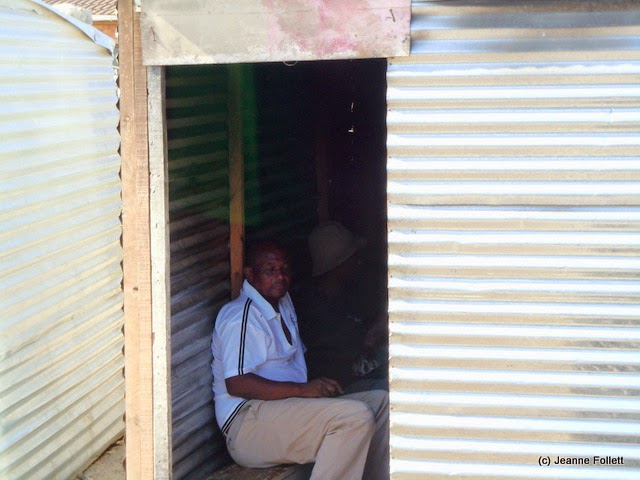 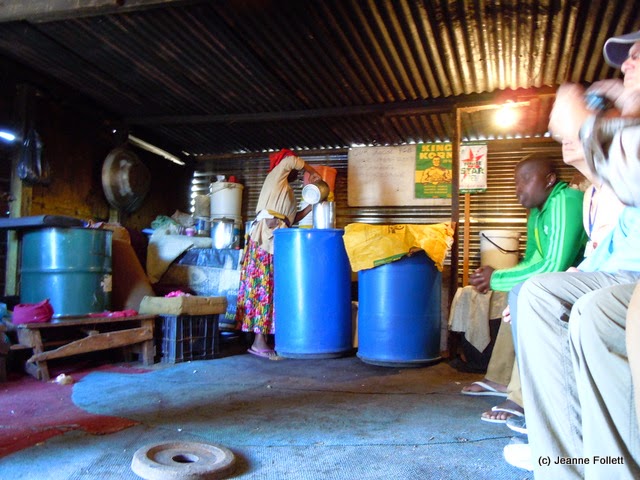 A woman is busy dipping liquid from blue 55-gallon barrels into a bucket in the back of the room.  Two African men, one holding an infant, sit against the wall opposite us.  The woman places a bucket on a stone on the dirt floor in the center of the room.  She covers it with a piece of wood. Another man and a woman appear from somewhere. 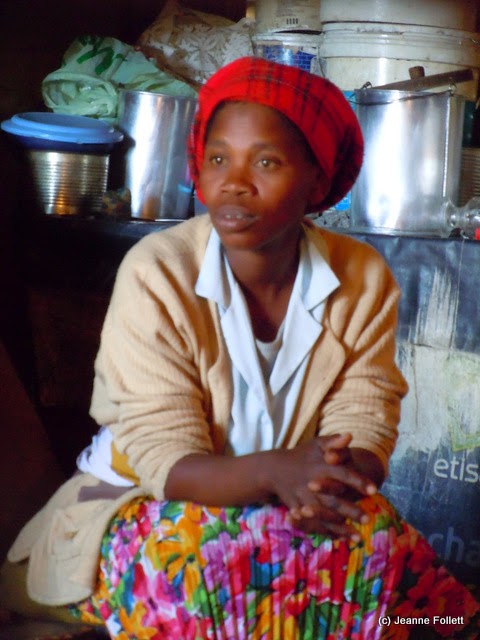 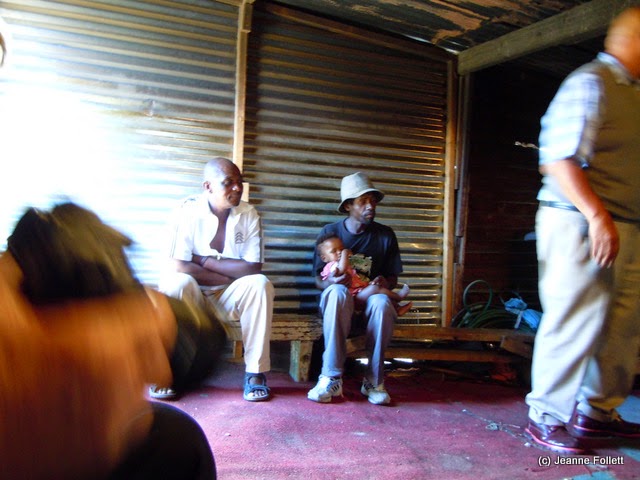 This is a shebeen, a drinking establishment owned and run by blacks, once illegal in South Africa, and frequently raided by the police.

During the Nationalist Party rule with its policy of apartheid, blacks were not allowed to own real property or businesses.  Illegal businesses sprang up in the shanty towns, shebeens being the most common.   “Shebeen” is derived from its origins in Ireland.   They were unlicensed places that provided a low alcohol content beer made from maize and sourghum, as well as music, similar to the juke joints of the American blacks.

The most important role the shebeens played were as meeting places for activists, and locals in the townships also got together to discuss social issues and politics.   Most often, these shebeens were in private shanty homes.

They also supplemented meager incomes of the shanty dwellers.  These and the dismal government-owned beer halls were the only options, as blacks were forbidden to enter white establishments. 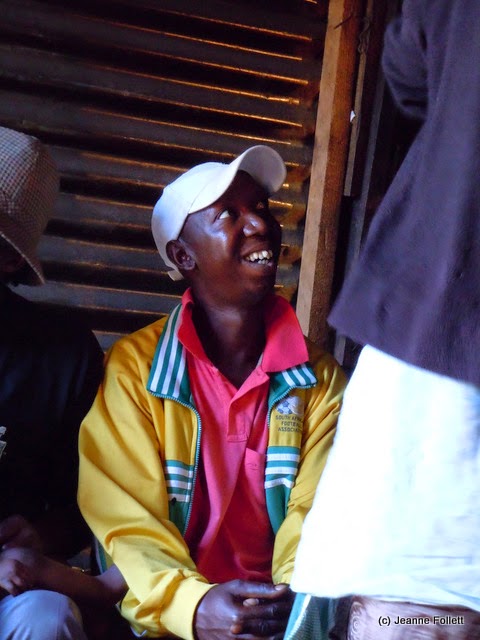 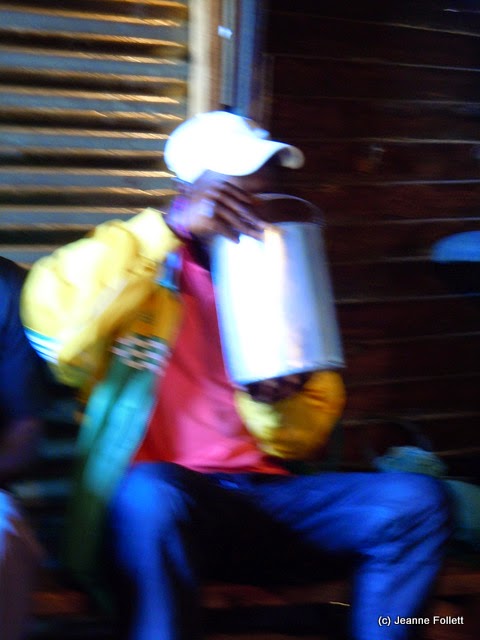 The bucket is passed to the African men and they each drink deeply. 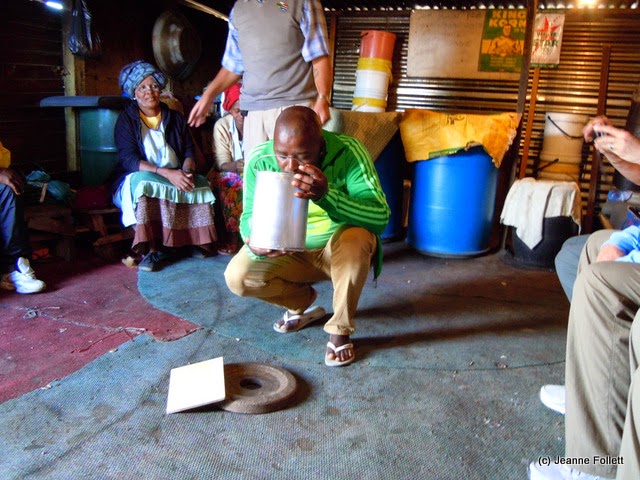 Our guide, not Desmond but the man who was at the hostel, also drinks and asks if anyone would like to smell the homemade beer.   We have been cautioned repeatedly against tasting the beer, warning that our stomachs are not used to it.


I indicate I would like to smell the beer.   It smells wonderful, rich and deeply aromatic.  This is Umqombothi, from the Xhosa language. 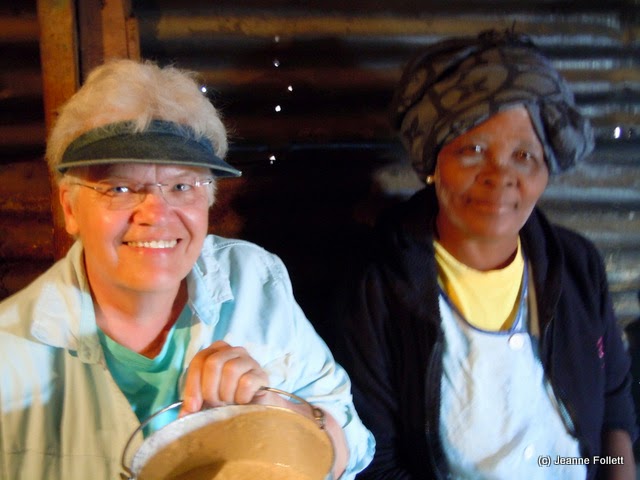 I have been considering the warnings and wonder if our guides are taking extra care to see that we are not exposed to HIV or AIDs.   An estimated 5.6 million people in South Africa alone are said to be carrying HIV or AIDs.   This number is declining due to a massive up scale in education and treatment.

However, when the current South African president Jacob Zuma was deputy president and also head of SA’s National Aids Council and the Moral Regeneration Movement, he had sex with a woman known to be HIV-infected.   Zuma was charged and acquitted of rape in that incident, but claims he took a shower afterwards to reduce the risk of infection.  He also stated he believed that a healthy man would not catch HIV from a woman.

I didn’t drink the beer.

From the shebeen, we drive down more narrow, sandy roads through squatter shacks and stop in front of a souvenir shop.   Inside, the typical trinkets seen everywhere were displayed.   I want to buy something from the women working there, and I find a small shanty town design painted on a piece of plywood that I liked. 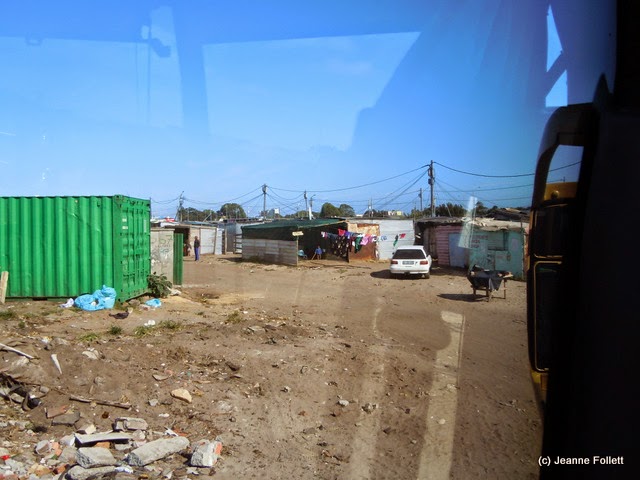 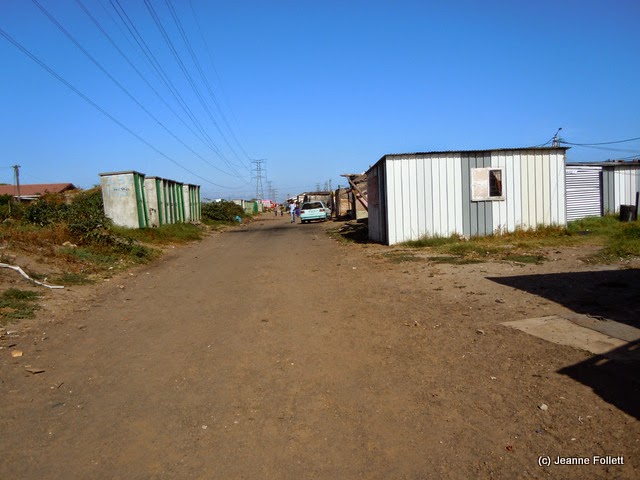 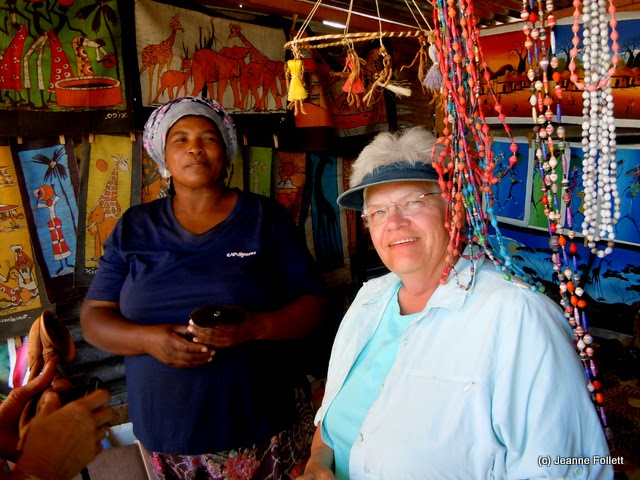 When I ask the price, she replies that it is a hundred Rand (less than $10)  I know it is worth a fraction of that, but rather than bargain, I give her that amount.  Some perverse part of me enjoys getting ripped off and knowing it, such as the time in a back street shop in Fiji a guy sold me a “dolphin tooth” that was actually a horse’s tooth.
These things make good story fodder, and as for the crude piece of plywood, I figure the woman can use the money.  I just hope she owns the shop and kept the proceeds, not just an employee who earns a minimal wage.

I don't need jewelry or expensive souvenirs.   I buy things that "speak to me" or have a story or special meaning behind them.

Desmond had told us on the drive not to feel sorry for the shanty people.   Some of them live there by choice, saving money to put their children through college.   Some have houses they rent out, but live in shacks for the income.

As we continue through the shanties, we pass nice houses, school kids, and a chicken shop.  Remember, it's hot in South Africa, and these chickens are not refrigerated. 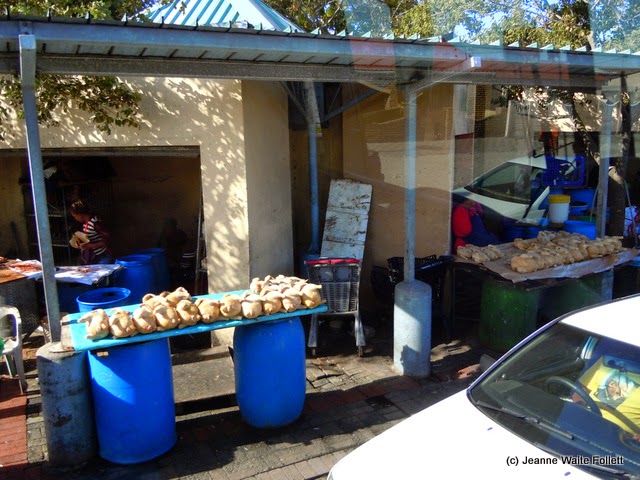 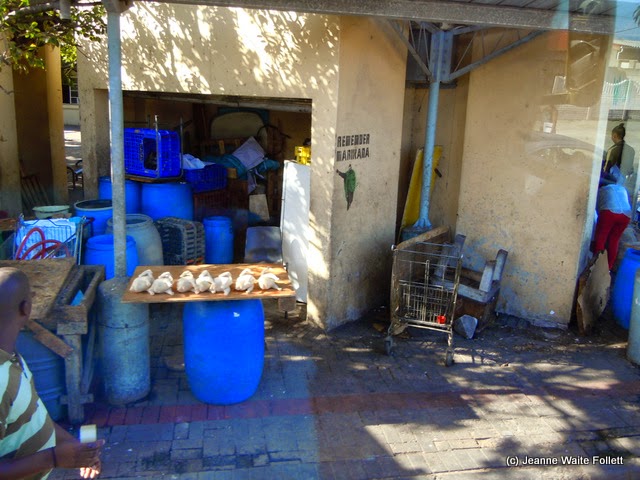 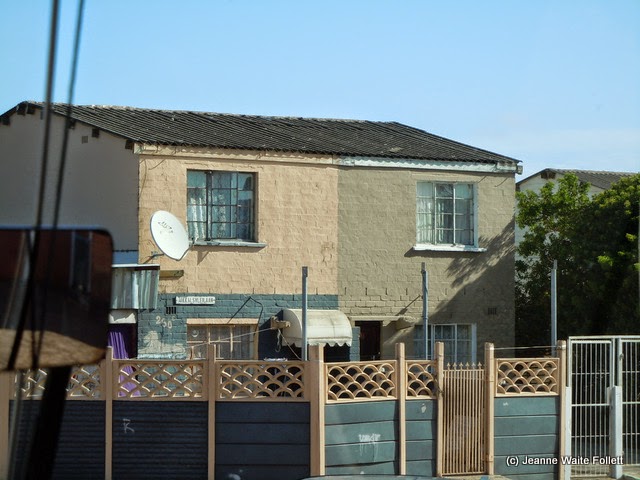 I think about the smile on the shanty shop woman’s face as we drive back to our very nice hotel in downtown Cape Town.   At times, I think she was pleased to have “taken” me while I’m pleased to have helped her in a small way, like maybe helping to put a kid through school. 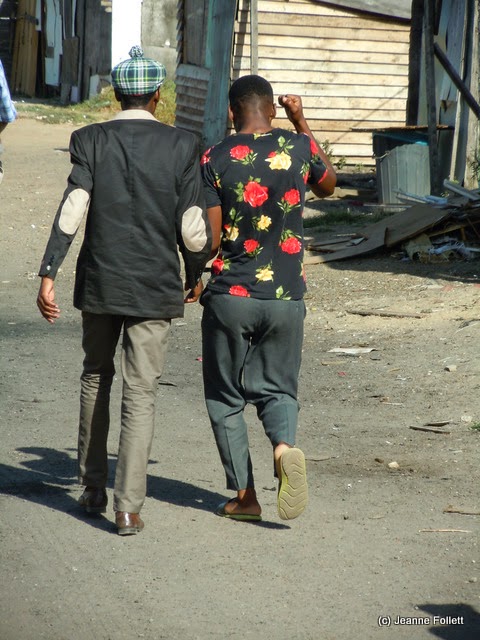