Chapter 59
The Cape Peninsula
Part One

A thick layer of cotton spreads across the top of Table Mountain as we exit the Cullinen Hotel in downtown Cape Town for today’s adventure.  The clouds look substantial, with body so thick you couldn’t put your hand through them.

Today we are going sightseeing, though I wonder how anything can be prettier than Cape Town itself.

Well, I’m proven wrong right away.   Right on the outskirts of the downtown business district, not a half dozen blocks from the hotel, counting the one-way streets, the scenery improves immediately.   Fortunately we have to pause for traffic so the view improves with time.   All too soon, though, we pass that remarkable site. 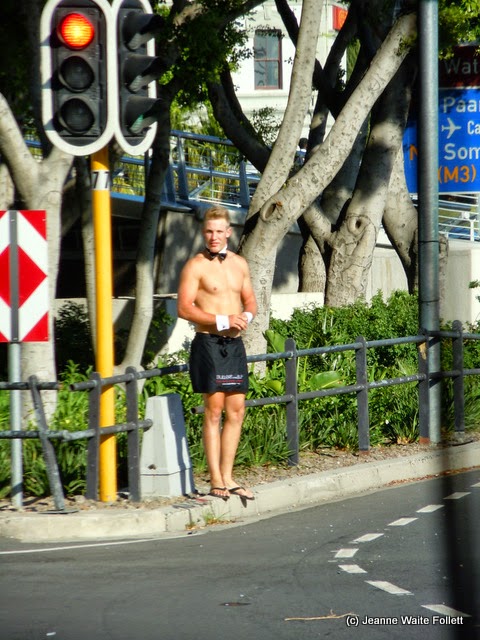 Ah, but the Cape Peninsula has much to offer, as we shall see.  Our destination is the tip of the peninsula, a spot known as the Cape of Good Hope.   Contrary to what you think you remember from your geography classes, Good Hope is NOT the southern tip of the African continent.   That point would be Cape Agulhas, 90 miles ESE.

Good Hope marks the point where ships traveling south along the western coast of Africa turn eastward into the maelstrom that results from the meeting of ocean currents of differing temperatures, the cool Atlantic with the cold Antarctic and the warm Indian Ocean.   We’d had a taste of it when we returned to Cape Town from Robben Island, and that was within Table Bay.

In order to get to Cape of Good Hope, we had to drive a ways and then visit with Bonnie and Clyde, but they were so interesting that I’ll write about them in another chapter.   For now, it’s onward to the Cape of Good Hope. 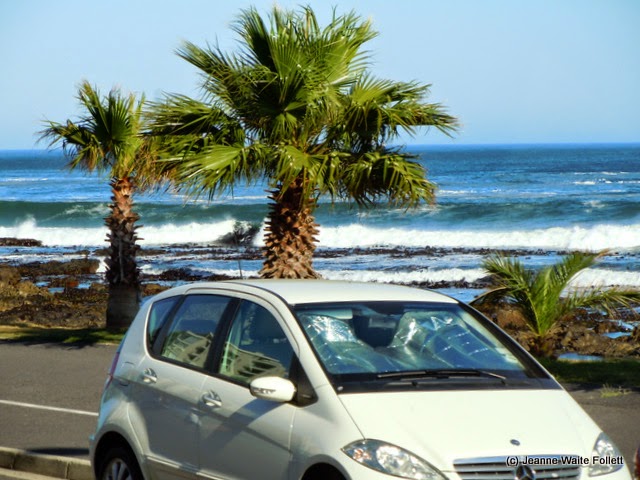 The drive is stunning, as are the beaches.   This is the high rent district. 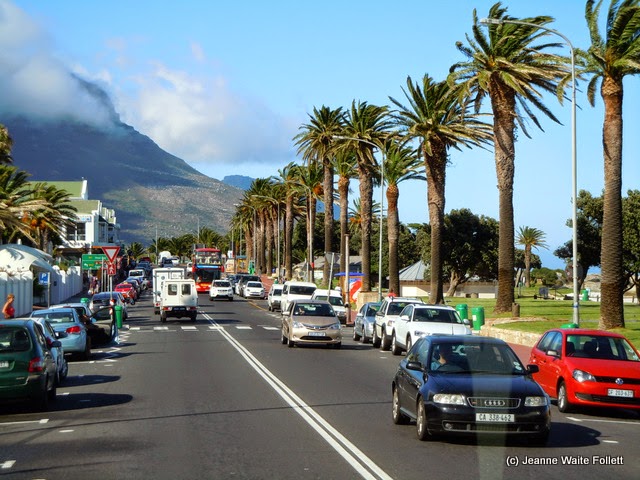 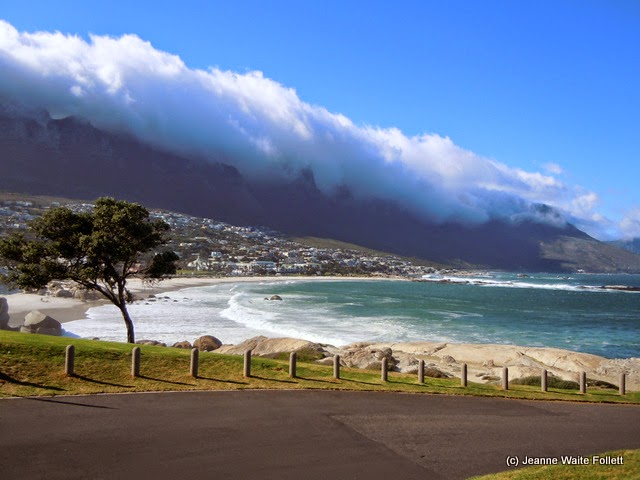 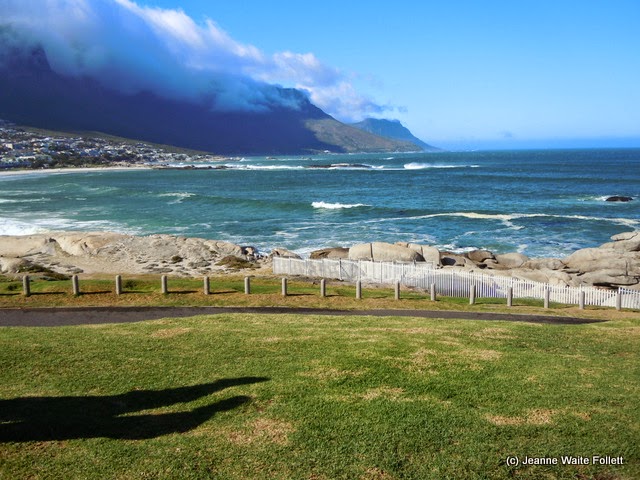 We pass an intersection with a highway to the coastal town of Houk Bay, but fear not, we shall return.   The highway gains altitude across from Houk Bay and soon we are clutching the side of a steep mountain called Chapman’s Peak.  Nicknamed Chappies, this road was renowned as an engineering marvel after its completion during World War I.

These days it is one of the most spectacular marine sightseeing venues in the world and the site of many international and local bike races.  The 5.6 mile long road serpentines through 114 curves to almost 1950 feet above sea level, that sea being almost straight down.  You are probably exactly 1950 feet above sea level if you’re looking down from the seat in a motor coach.

We stop at a particularly beautiful point for photos. 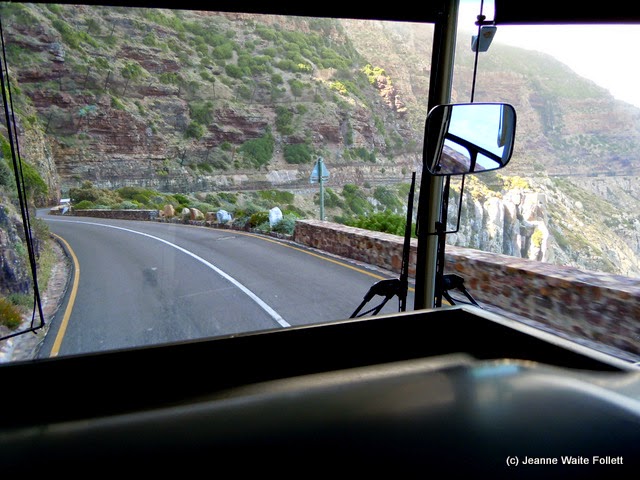 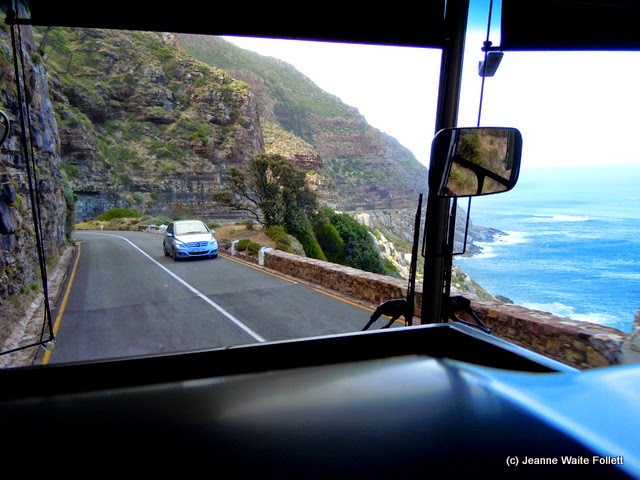 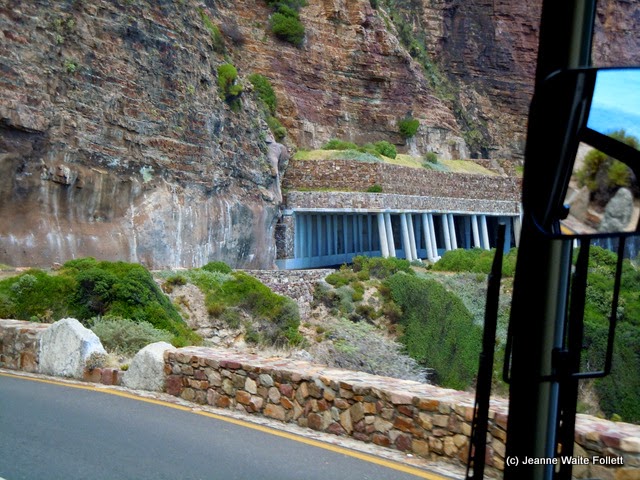 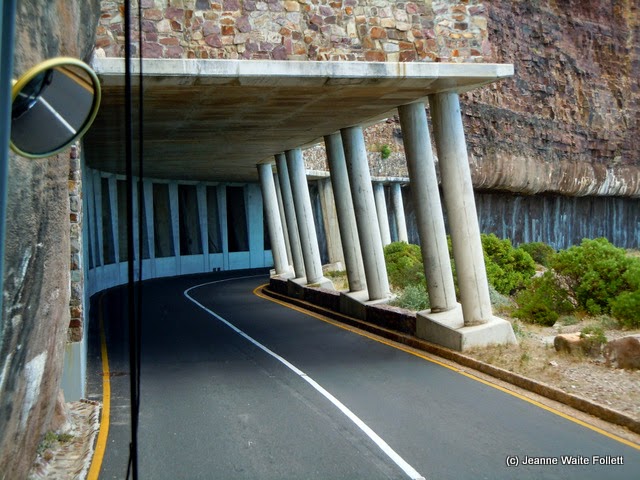 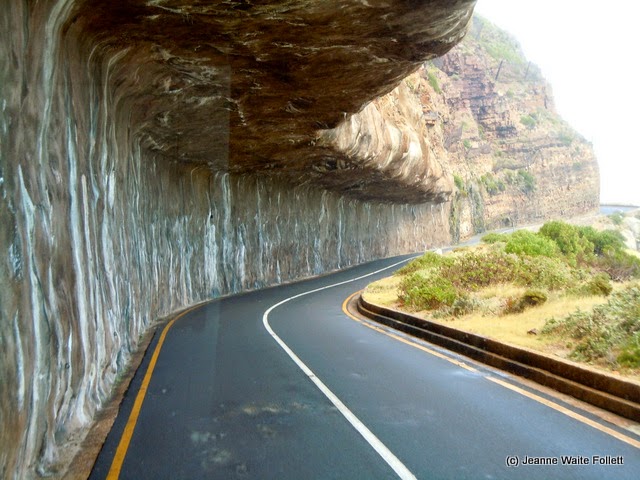 From Chappies, we cross to the eastern side of the Cape peninsula to Simon’s Town and make another detour, but I’m but going to tell you about that today, because it deserves a story of its own.

Ironically, the land along here is where the Coloured were exiled from Cape Town by the Nationalist Party enforcing the apartheid separation of races.  It’s a gorgeous place to , and many of them still reside here.

So, keeping in mind that I owe you Simon’s Town and Bonnie and Clyde, let’s continue down the peninsula to our destination for the day. 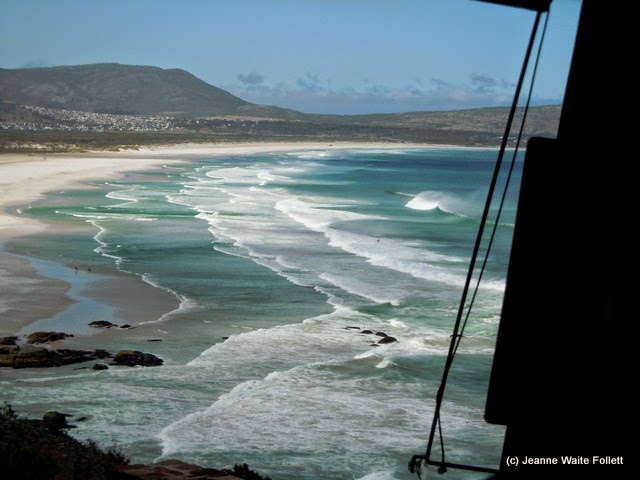 This is the entrance to the Cape of Good Hope Nature Reserve, 8000 hectares in area, and part of the Table Mountain National Park.   There are 130lant species cataloged on the peninsula, including 52 varieties or orchids and 2500 varieties of protea.   Many species of birds and mammals, such as ostrichs and eland, also live here.


After a short drive down the spine of the peninsula, our driver turns off the main road and winds down to the coast, where he parks.   The day is warm and sunny, and a bit windy.  We see clouds of birds flying over the waves rolling in, but can’t see what they are after. 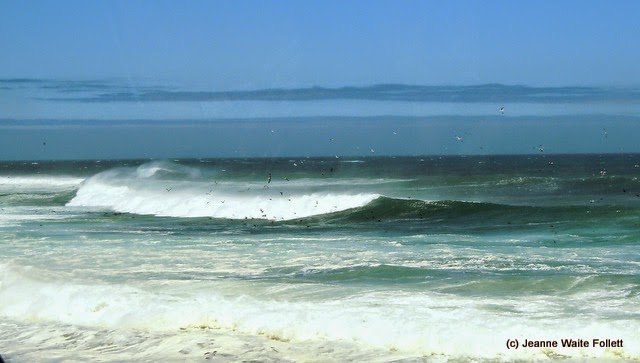 This is the Cape of Good Hope.   A sign marks the spot. 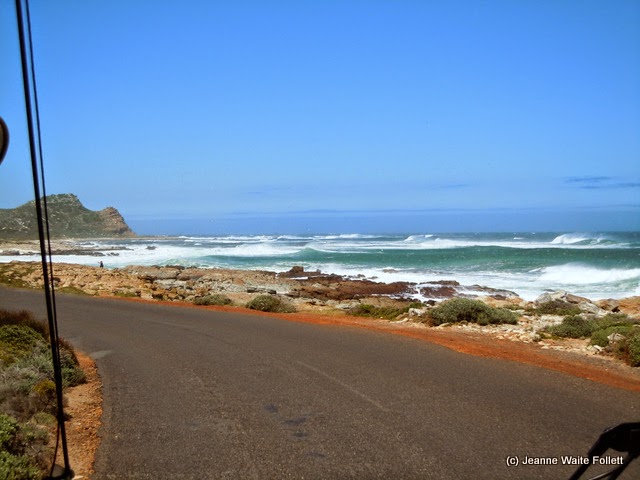 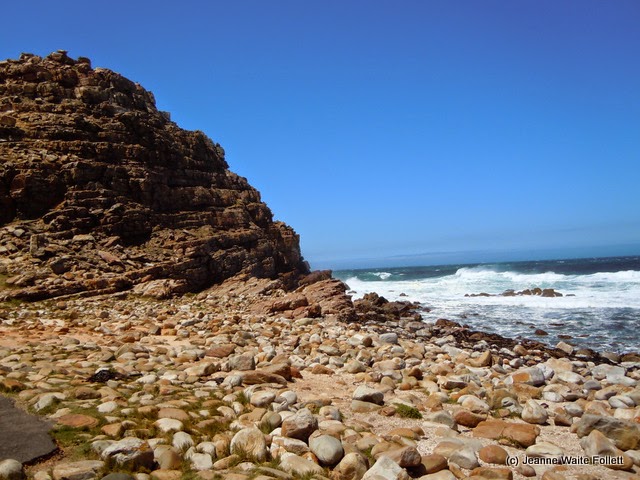 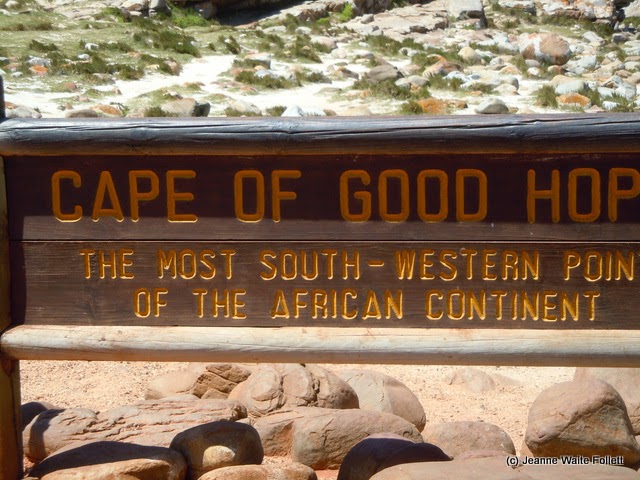 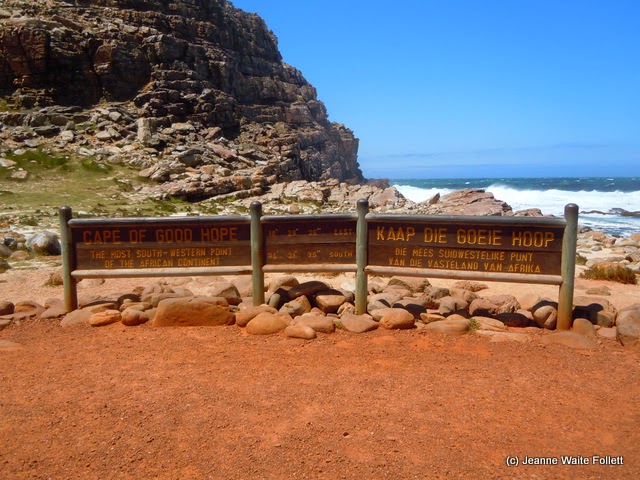 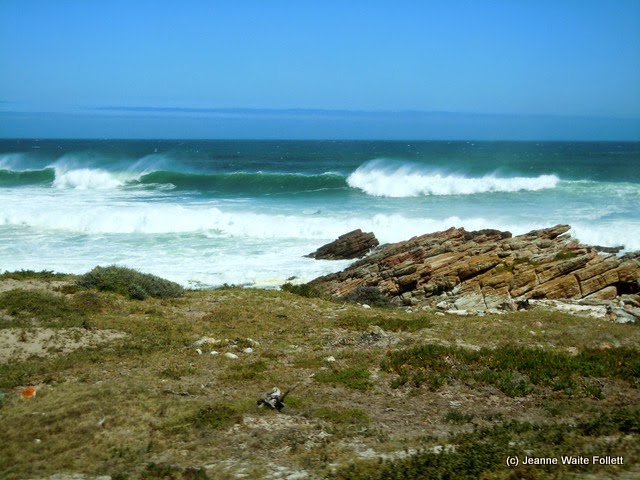 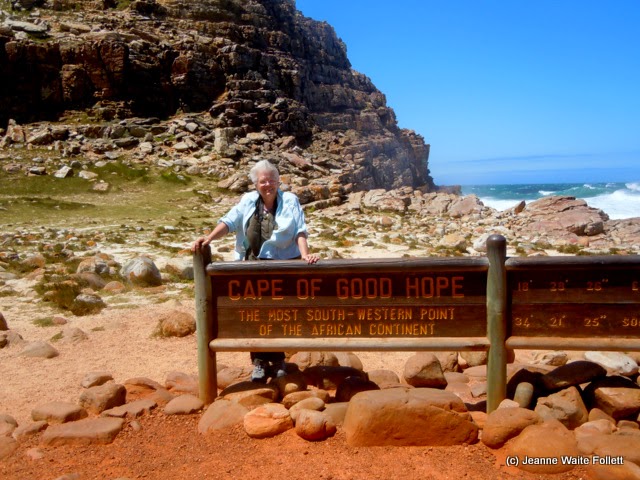 To be continued, because, if you remember, I promised a  visit with Bonnie and Clyde and also a  return to Simon's Town for a treat.