In our passage from the Cape of Good Hope the winds were mostly from the westward with very boisterous weather…—William Bligh
I have a bunch of photos to show you, but not much to say about them, so I’ll tell you a story and intersperse it with the photos of Cape Point.

Back-tracking a bit:   Before we reached the Cape of Good Hope, we passed two monuments, one of each side of the road.   The first one is in memory of Bartolomeu Dias, the Portuguese explorer who was the first known European to round the Cape.  He called it Cabo das Tormentas, the Cape of Storms.

Upon his return to Portugal, Dias had to explain to Portuguese King Joāo about the mutinies and attacks from natives that prevented him from venturing farther east, and thereafter fell into disfavor with the king.

The king changed the name of the cape to Good Hope  (not having been there himself to understand the basis of the name given it by Dias) because it opened trade routes for ships to the riches of the Indian Ocean settlements.

A decade later another Portuguese explorer named Vasco de Gama made a successful voyage around the tip of Africa and arrived in the Orient in 1497, thereby trumping Dias.   This was a monumental success for Portugal and other European traders.   No longer would ships have to cross the disputed Mediterranean Sea nor caravans the highly dangerous Arabian Peninsula by land to reach the riches of the East, and it also cut out a lot of middle-men who cut into the profits.

Not only did it open the world to global imperialism, it also began the era of vast Portuguese colonial settlements in Africa.

As for Dias, his disfavor continued until 1500 when the king authorized another expedition to the Orient, and while Dias was not commander of the 13-ship fleet, he did captain four vessels.  The fleet encountered ferocious storms at Good Hope in which four vessels were sunk with all hands lost, including the one Dias was on, thus proving his original name Cape of Storms was the appropriate one, not that it did him any good then.

All of this means that there are Dias and de Gama statues and monuments are all over South Africa.

What’s at Cape Point?   Not any more statues, but a funicular, which is a little railroad that takes tourists up to the Cape lighthouse.   This is the second lighthouse located at Cape Point, which is higher than the cape at Good Hope, a mere hop, skip, and a jump away.

The old lighthouse was a bit of a serious problem for several reasons.   One is that because of frequent foggy conditions, it often was not visible.   Second, it could be seen “too early” and thus, like the Lorelei rock in the Rhine River in Germany, lured ships to destruction because they approached too closely.

One of its victims was the Portuguese ocean liner Lusitania which wrecked on nearby rocks in 1911, with the loss of eight people when a lifeboat capsized.   This is not to be confused with the British liner Lusitania that was sunk in 1915 by a German U-boat.

Thereafter,  the new lighthouse was built lower down, 285 feet above sea level.   It cannot be seen by ships approaching from the west until they are safely far away from shore.

When we arrived at the lighthouse area our herd bolted for a really nice restaurant for lunch.  We had a time limit of an hour to eat, go up to the lighthouse, and return to the coach.  Busy restaurant, long line for the funicular, and lots of things to see at the top.   An hour?

And then there’s the Flying Dutchman funicular, no doubt named after the fabled 17th century Dutch man-o-war ship that wrecked off the cape and is now a ghost ship, forever unable to reach shore.   A number of sightings of the ghost ship have been reported, the last being in 1942 when it appeared off the coast of Cape Town— only to disappear.  Seeing the glowing apparition is said to be a portent of doom.


Good thing I didn’t know that before I rode the funicular up to the lighthouse. 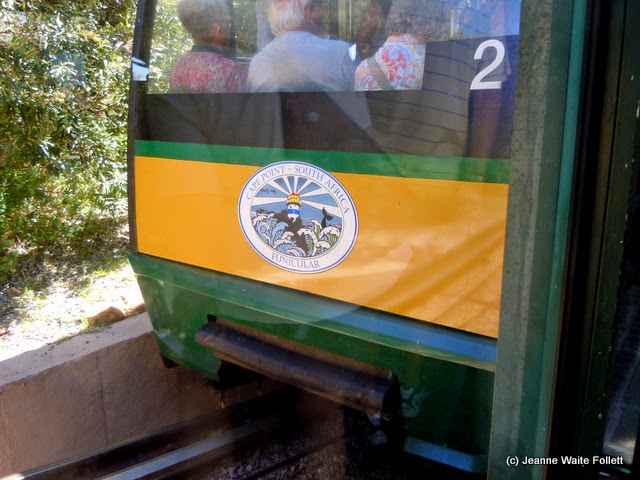 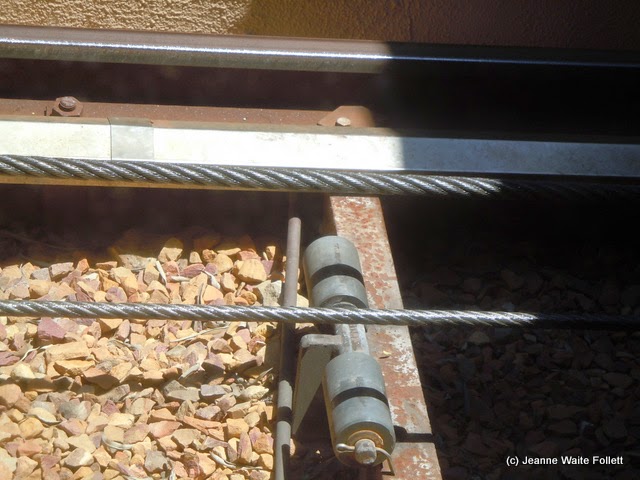 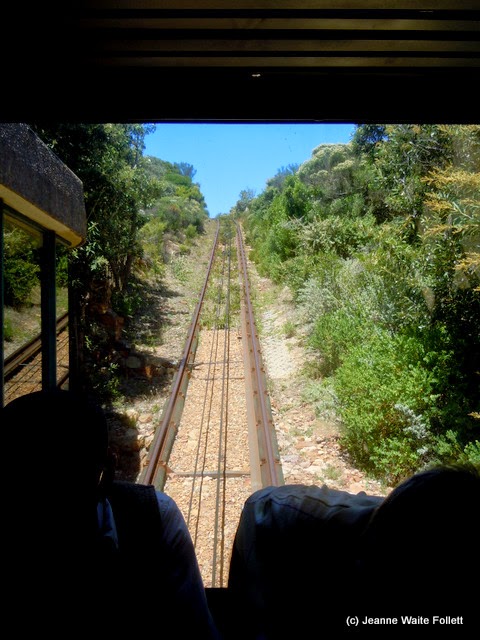 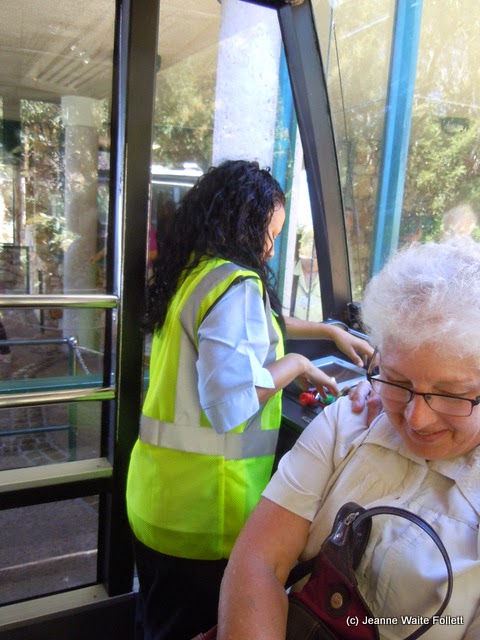 A funicular is a railway in which two tram-like cars are attached to each other by a cable, each acting as a counterweight to the other and thus reducing the energy required to make one car ascend a steep slope.   The cable runs through a pulley at the top, and an electric motor operates a winch. 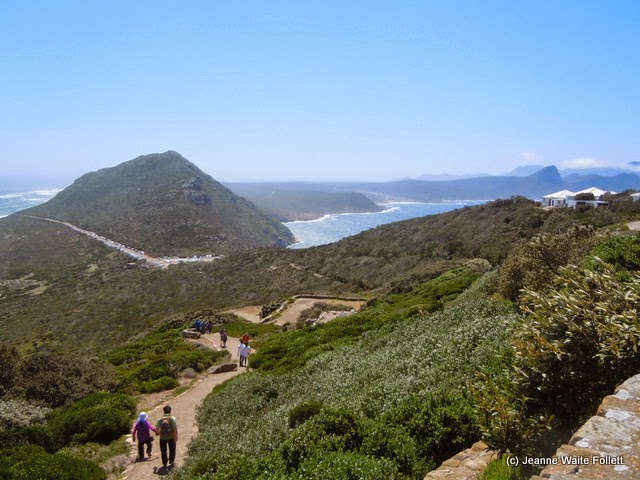 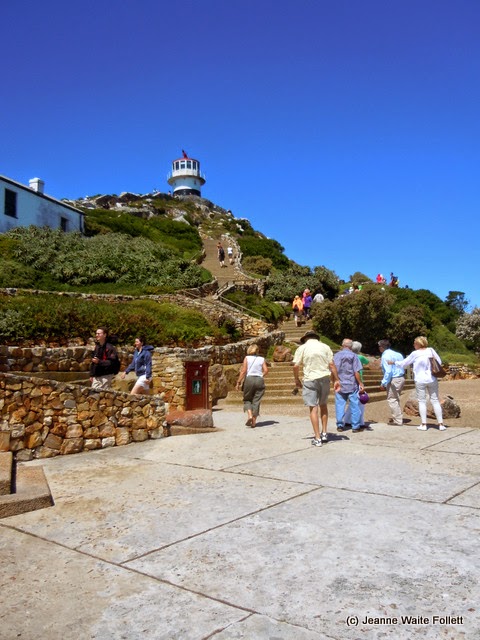 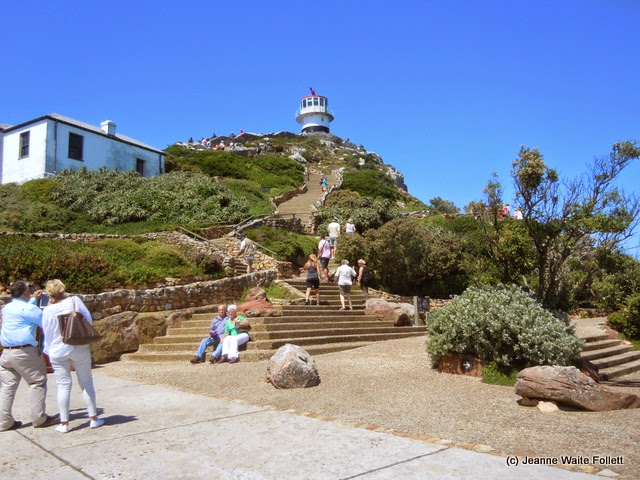 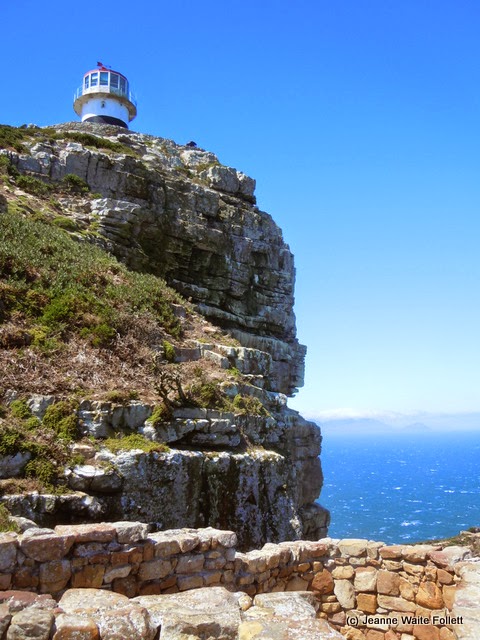 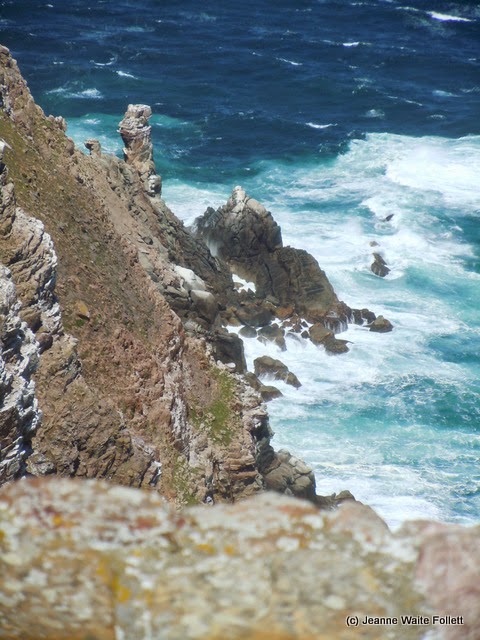 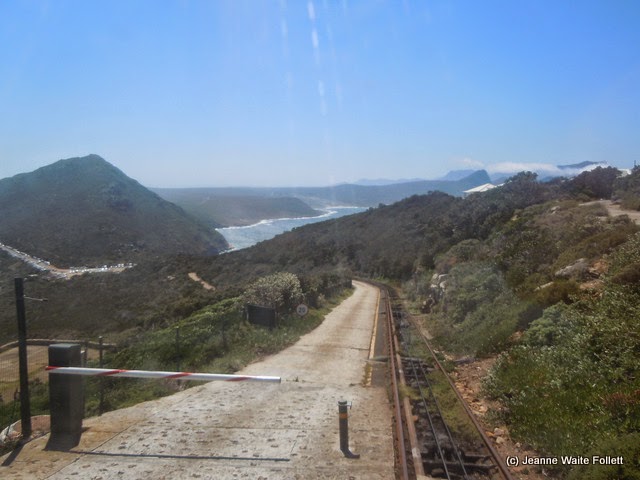 We blew our one hour time limit all to heck at this beautiful spot, mostly because the line for the Flying Dutchman was very long.   As we left the parking area and headed downhill, wild eland and ostriches roamed the rocky coastline. 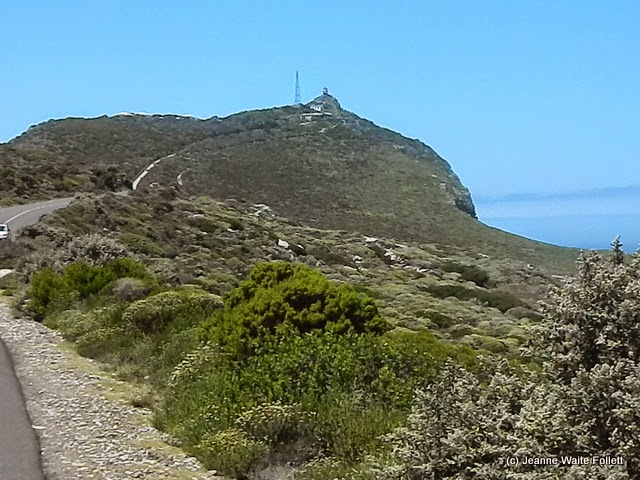 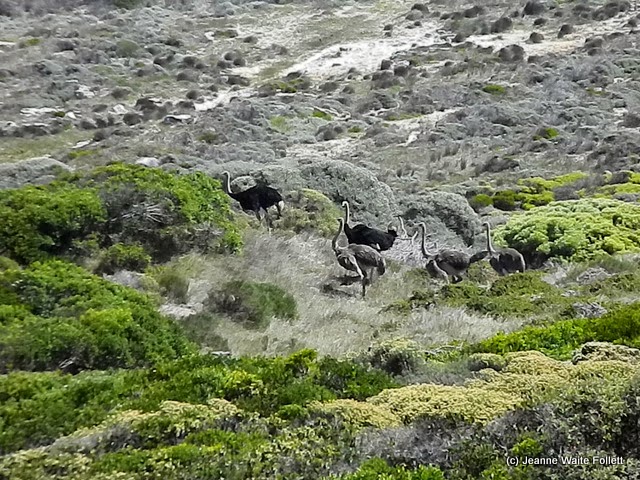 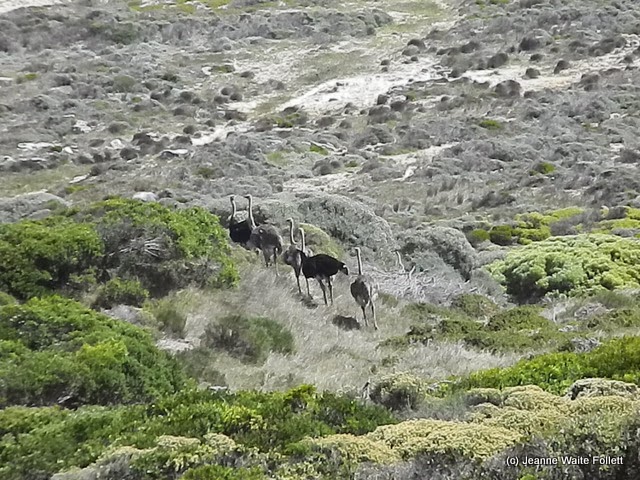 Stayed turned for Bonnie, Clyde, and Boulders Beach next on your radio dial.