The Wyoming Journals, Ch 5: And on the Third Day

And on the third day……

We were eating Barb’s famous sweet and sour chicken for dinner last night when Chris began lobbying her dad Bud hard about what time to set the morning alarm.   “We have plenty of time when we get up at 3:45,” she said.   “We could sleep in a little while longer and still have plenty of time.”

“We were late leaving this morning,” said Bud, standing by that time.  After all, he’d been doing this for 40 years and that’s how they always did it.


“But we got there in time!”   she retorted, “there” being a hunting blind on top of a mountain.

By the time it was over, Bud had yielded and we got to sleep in until 4 A.M., a whole 15 minutes more.  Nonetheless, Chris’s phone alarm song was just as irritating when it went off on the third day of hunting season. She says it's a song.   If so, I never understood a word.

This morning’s breakfast is ham and eggs.  Bud tells me they are going to hunt in a different place this morning—the meadow where we had seen moose and elk the first day.    He suggests I might want to stay in camp because they are going to a place where there was no blind to sit in and the mountain was quite steep.

He doesn’t have to lobby me as hard as Chris had lobbied him the night before.  I politely wait until they leave before I go back to bed.  I do not shove them out the door, but I do watch them drive away.   I knew what was going on in that Bronco.   Chris was saying,  “Okay, now all together sing, ‘A-hunting we will go…’ ”


The weather was wonderful, warm, not windy, and most of the snow was already gone, so I was surprised to see them return in a few hours.

The reason:   And on the third day, Bud got his elk.

After lunch, they round up the necessary gear and we pile into the Bronco.   Somehow, in these sketchy cell phone reception areas, Bud managed to reach Brad and Charles, and they were on their way to help.


Of course, Bud didn’t shoot an elk on top of the mountain where we have access.   No, he shot an elk waaaaay down the mountain.   I watch in awe as the guys rig up a system to get the field dressed animal to our elevation.   This is so much different than the moose hunts I’ve been one, where Ken and his hunting pals field dressed the animal, skinned it, cut it into quarters, plus the ribs and neck, loaded it all on horses or ATVs and went to camp.

Here, the animal is delivered to the processing shop with its hide on. 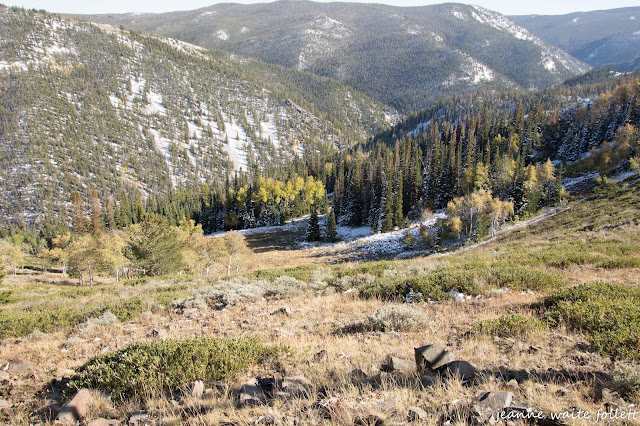 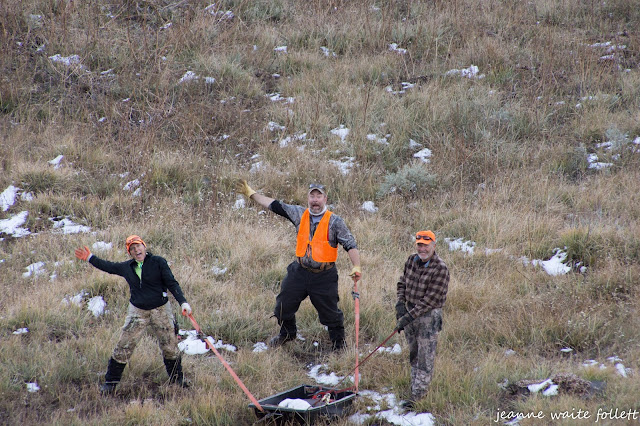 Some young hunters came by and watched this operation for a while.   Before they left, they commented on how much they'd learned about getting game out of the woods.

It's time to fix dinner when we get back to camp.   The lasagna, made by Brad's wife using elk burger, goes from refrigerator, to oven, to table.   And it is delicious!