A Eulogy to Joy of Bears

I  first saw them when they burst from the forest, two second season brown bear cubs romping like kids released from school at recess.    Confident and independent, these two bounded up the river beach to the bend.   Far behind them, the sow and the third cub strolled along the river bank. 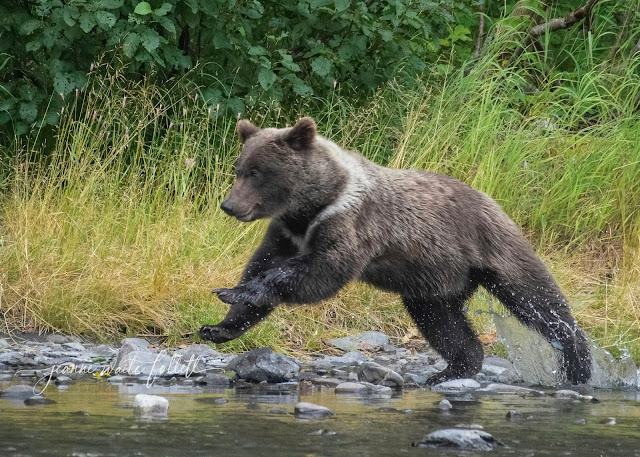 The two cubs stood on their hind legs and waded into the water.   Then they watched carefully for a salmon carcass to float by under the water.   A quick duck and up they came with their treasure.  Or not.   They were still learning.

They caused traffic to snarl on a major highway above the river and infuriated semi-truck drivers.    They made DOT men barricade the meager highway shoulders to prevent parking.    Exasperated State troopers made noise with their loud speakers and sirens to try to drive them away. 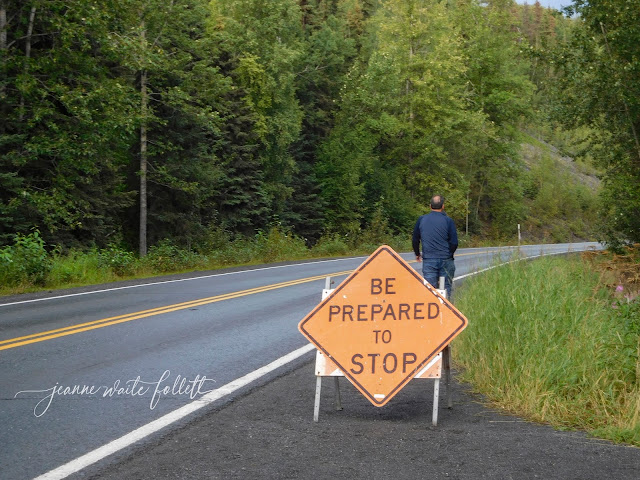 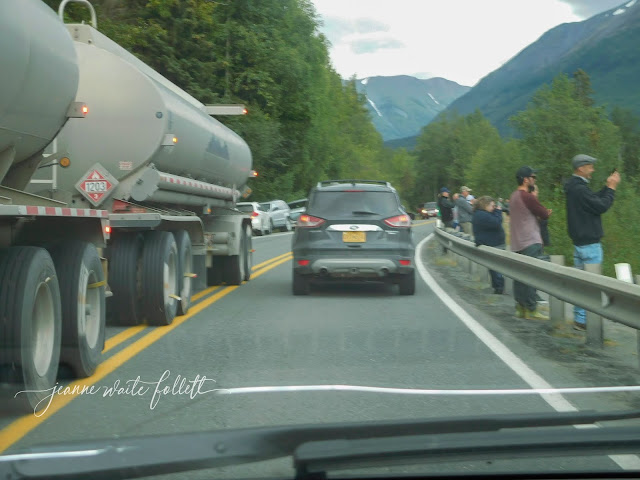 I stood by, smiled ruefully, and said, “This is Alaska.  We stop for wildlife.  Anywhere, anytime.   It’s why we live here.”

The wildlife was any of the fifteen individual bears I identified that were in the turquoise waters of the Kenai River, looking for salmon and often standing right next to human fishermen.   But the unique markings on these triplets made them easily identifiable and their joy infected all of us.

At this particular curve of the Sterling highway, motorists could look down over the guardrail and have a clear view of the river.   When they saw bears, they stopped and gawked and took photos with cell phones.   Some tried to find a spot to pull over so as not to stop traffic.    Some stopped right in their lane and rushed to take photos.   Some, like me, drove ahead a hundred yards to a pull out.

Black tire marks on the pavement tell the story of close calls. 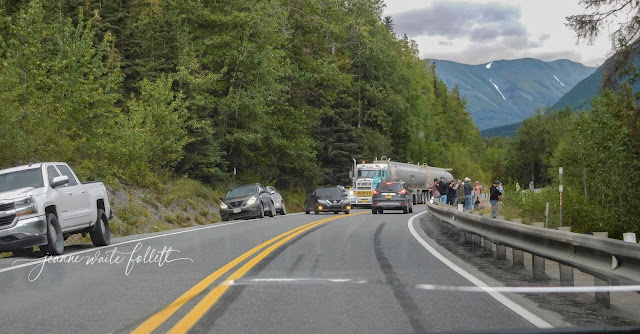 Watching from across the river while perched on large boulders that are part of the riprap protecting the bank from erosion, my favorite was a family of four brown bears—a sow with triplets. 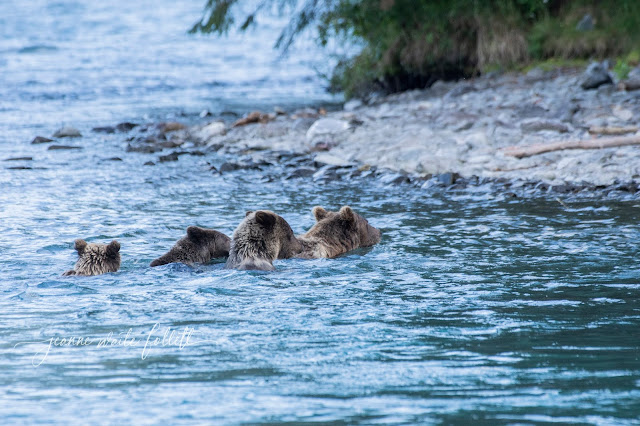 I spent days at river watching these bears, clicking away with my camera.    Sometimes I sat on boulders hot from the sun and sometimes I wore rain clothing and huddled under an umbrella. 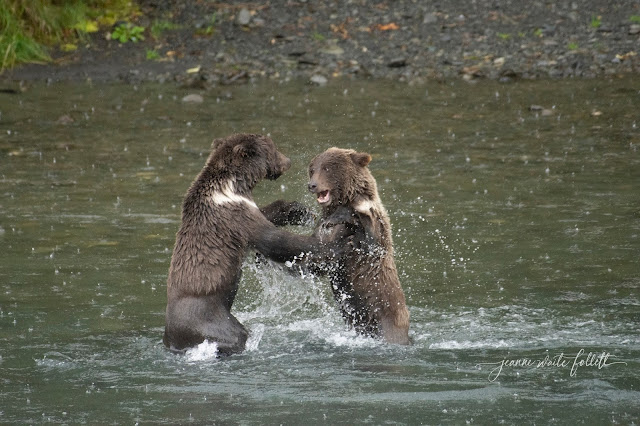 There were other bears—two second season cubs that had survived the winter after their mother was shot and killed, a brown sow with a young cub, a single brownie.   There was a black bear sow with two cubs, one with one cub, and at least one single black bear.

But it was the triplets that stole my heart.  Their sheer joy and exuberance captivated me.    It could be a tropical deluge and the cubs would stop their fishing to spar with each other, splashing water everywhere. 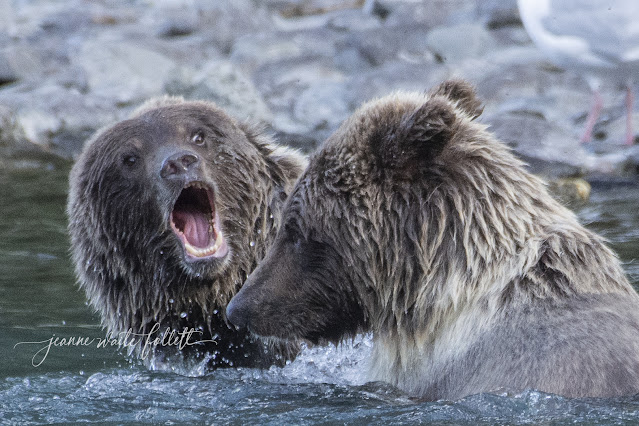 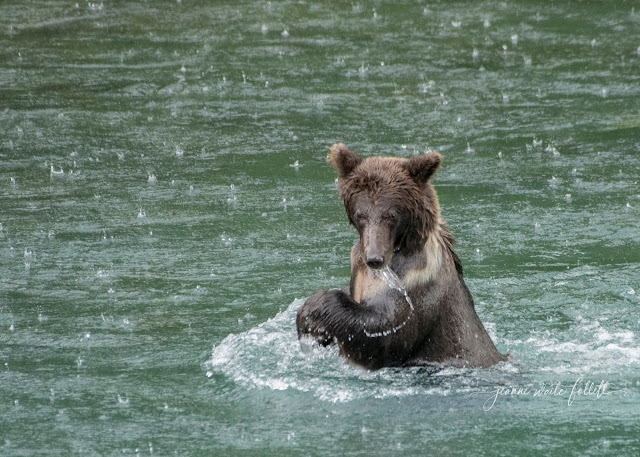 The smallest and lightest in color I decided was a female.   She stayed close to the sow.  One day, she was somehow separated from her family and came floating down the river bawling for her mom.  She made it to shore and went into the forest where they usually did. 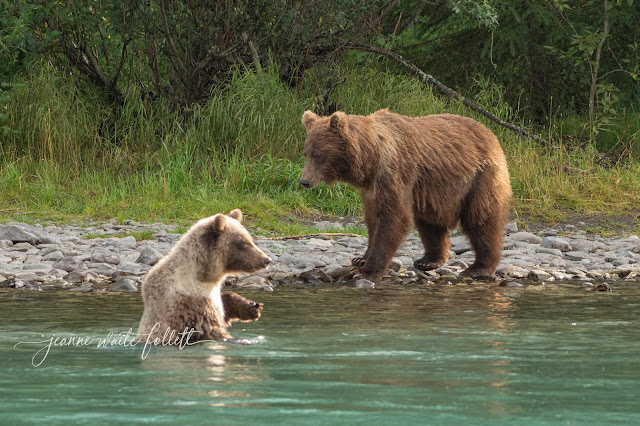 Sow and her female cub. 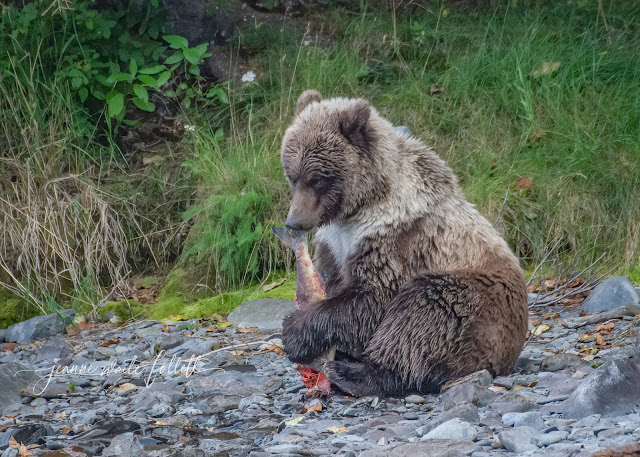 An hour later, I saw her cross the river and disappear upstream   A short time later, down the river she came floating, again bawling for mom.

The cubs cared little for the human fishermen that shared the river with them.   The humans, for their part, behaved well.   If the cubs came too close the humans would move closer to or climb into their boats.   Sometimes an air horn sounded—particularly at one persistent black bear. 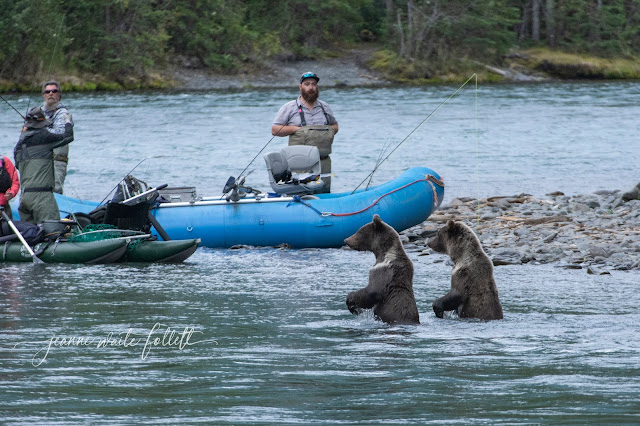 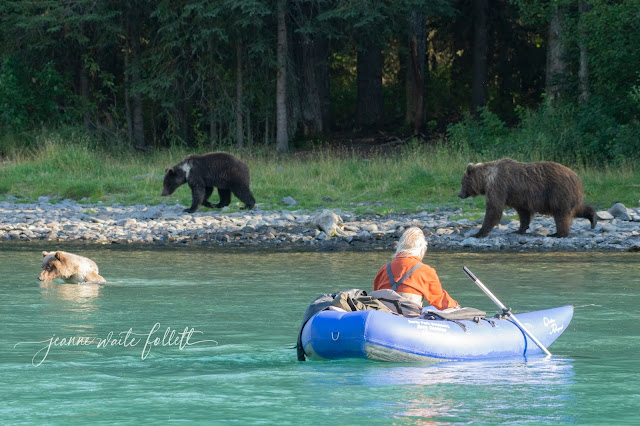 Sow is at right.

As I watched the interaction, I reluctantly came to the conclusion that these wonderful creatures were doomed.   They were entirely too habituated to humans. 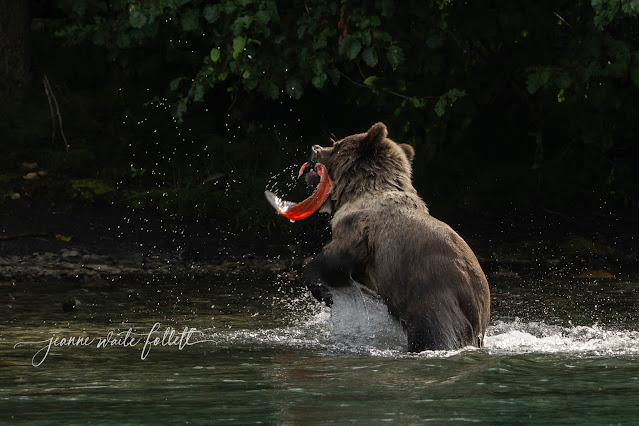 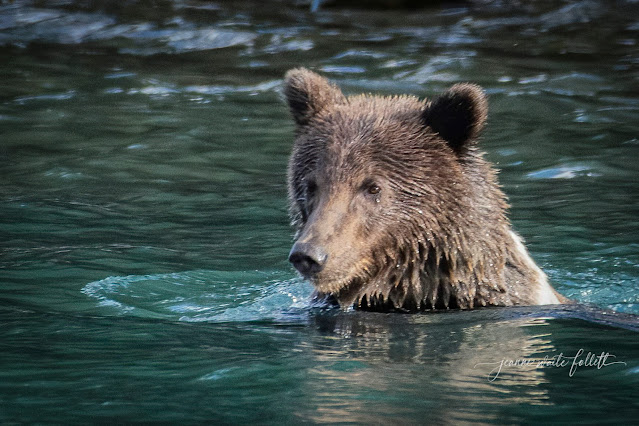 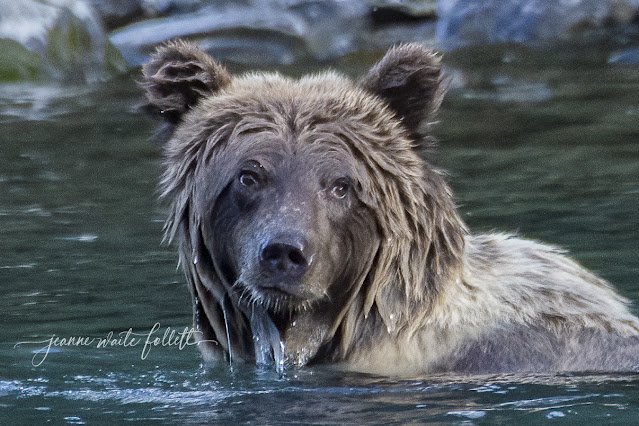 Alas, my fear was realized, but not in the way I had thought. 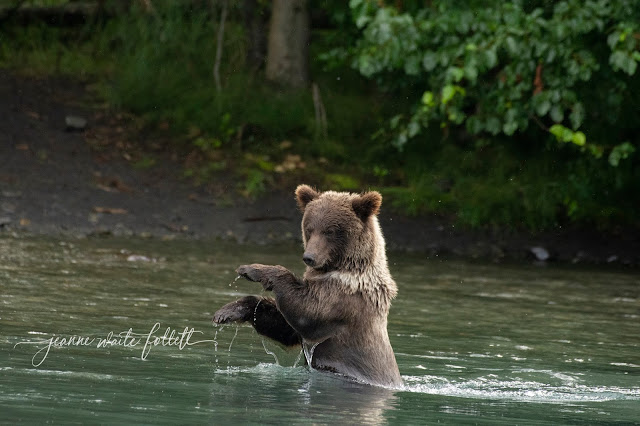 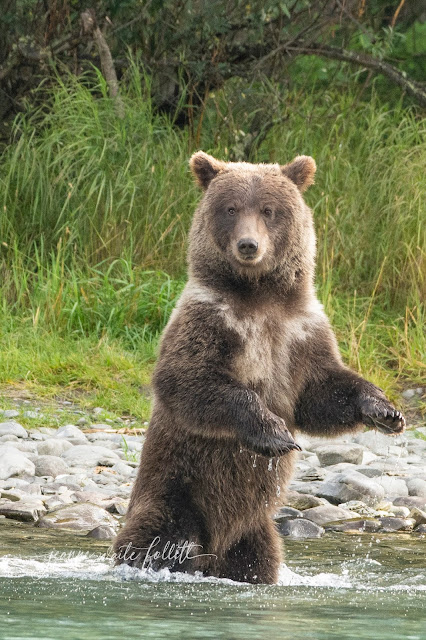 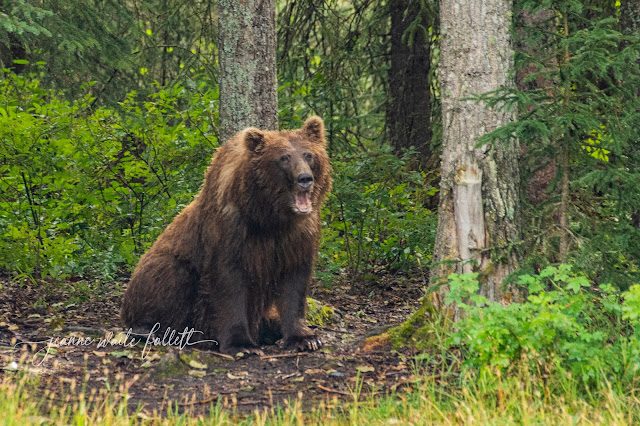 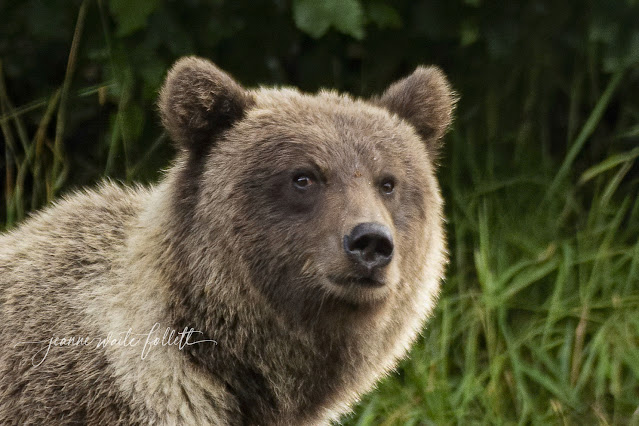 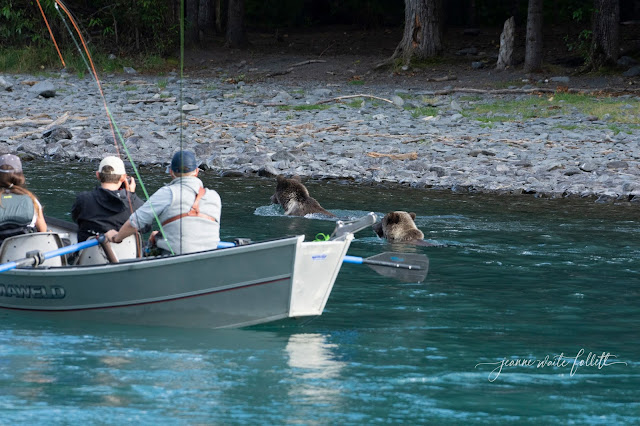 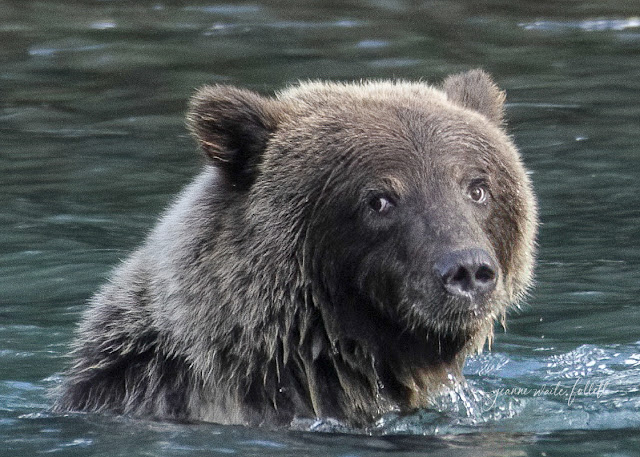 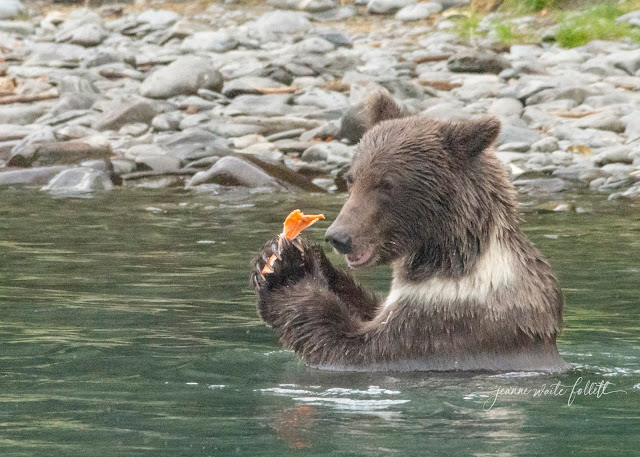 Instead, the highway did in the bears.    First, the sow and one cub were hit by vehicles.    A few days later, a second cub was hit by a vehicle.

The third cub, apparently unwilling to leave its sibling on the road, kept approaching the men who were trying to remove the dead animal.   When efforts were made to chase it off failed, the decision was made to put it down as it would be a hazard.

All this happened just recently.

There’s a lot of sadness expressed on social media these days, and lots of photos posted of these animals that captivated so many. 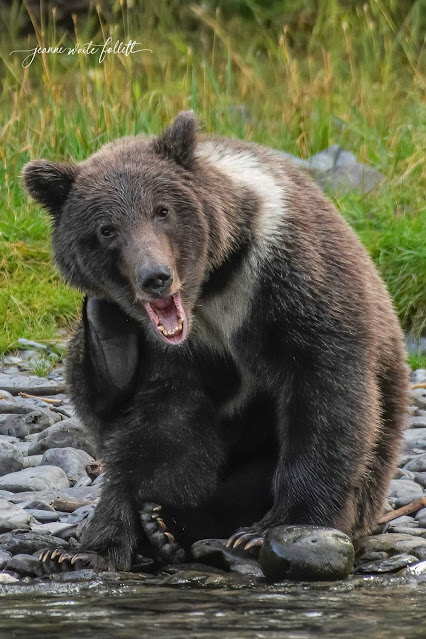 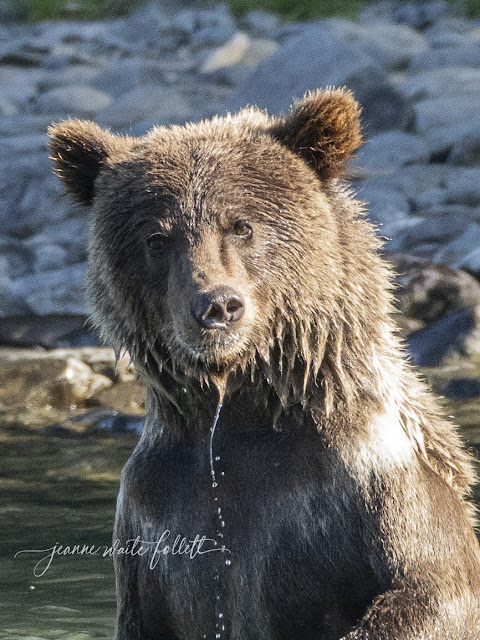 No, its nose isn't crooked.   It's twitching to check me out.

I’ll miss them next summer, miss their bounding from the forest, miss their antics in the river, and miss their sheer joy for life. 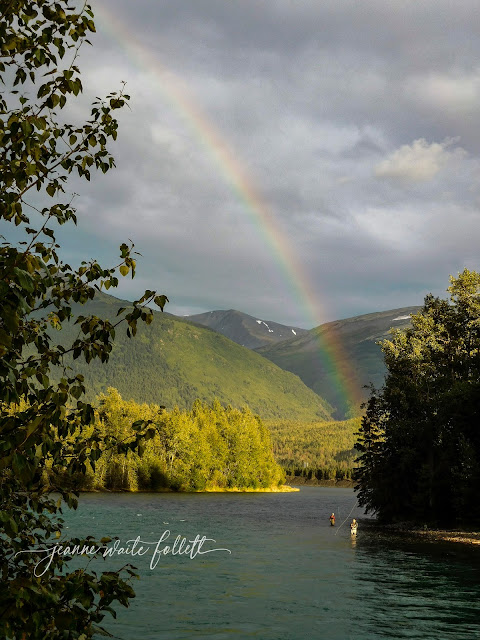