The Aussie Journals, Ch. 10, Didgeridoo and Gullible, Too

Didgeridoo and Gullible, Too 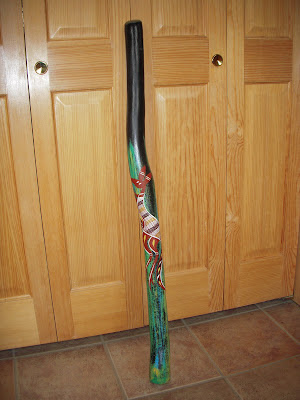 I must have had my mouth open, because, “OH, GOD, NO!” escaped before I could shut it. Such is life. C’est la vie. Oh, well. Open mouth syndrome is what usually causes most of my troubles.

Before I could shut my mouth this time, though, I was onstage with internationally acclaimed musician Andrew Langford, who had just captivated his capacity audience at the Sounds of Starlight theater in downtown Alice Springs, Australia. Worse, he was expecting me to follow his act! He asked me to sit on the stool, and handed me one of his prized musical instruments.

I started laughing. Not all of it was nervousness. In fact, I wasn’t feeling at all nervous, up there in front of the large crowd. The whole idea of me following his act was hysterical in the extreme, and I never quit laughing.

To explain my predicament, I must backtrack to earlier in the afternoon….

We were passing around various brochures while we waited for our coach to arrive to take us several miles out of town into the Outback desert, to learn about the Aboriginals of Australia, an enigmatic people who have lived on this continent between 40,000 and 70,000 years, with 50,000 being the currently accepted figure. One brochure in particular caught my eye. I passed it on to my friends.

“Look, Kristy,” said Kathy, “this place has didgeridoo workshops.” Kristy, the owner of a didgeridoo, took the brochure and saw the workshop would fit nicely into the free time we had right after noon, and would take place in the pedestrian mall where the coach was going to leave us after the Aboriginal event.

On hearing that a number of us were interested in the afternoon workshop, Simon led the way to the theater, and also secured discounted tickets for that night’s performance. During the workshop, Kristy made didgeridoo noises while I, seated beside her and trying to not spit out my denture, made trumpeting noises. Not acceptable. 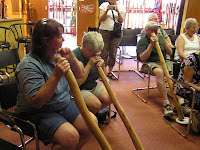 Eventually I accidentally made the correct noise and was thrilled. Others did much, much better. I was taken by the sounds of the didgeridoo, a reedy, haunting, droning sound that we heard in every shop we entered or passed.

After the workshop, I wandered around the store in the entryway to the theater where didgeridoos were displayed. I attempted a few more acceptable noises, though in order to keep my mouth off the beeswax mouthpiece, I circled my thumb and forefinger on it and blew. Again, quite by accident, I made the appropriate didgeridoo noise and the clerk gave me a thumbs up.

At the hotel later, as we were preparing to leave for the concert, Kathy asked me if I planned to buy a didgeridoo. I looked her square in the eyes and responded, “That would be absolutely the most foolish thing I could spend money on….” 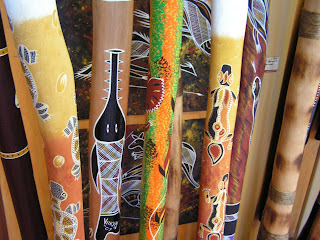 She nodded in agreement.

I had my eye on one already. Long and sensuously curved, decorated with a kangaroo in the Aboriginal art style, I was a goner when I read the tag that accompanied it: “Artist—Merkel, Key—F#, Timber—Eucalyptus Woolybutt.” How could I resist a didgeridoo made of woolybutt? I took it to the counter and asked the clerk to hold onto it for me until after the performance.

And that is what got me on the stage of the Starlight Theater. They had my name. And, as I said, my mouth must have been open when I heard it called.

“OH, GOD, NO!” I blurted—and headed for the stage. 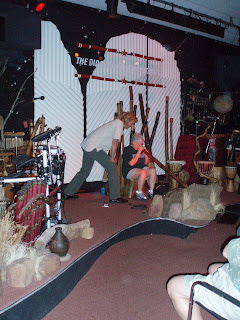 It did not take the beautiful Andrew long to figure out that I was no threat to trump his act. In fact, he quickly began trying to SAVE his act by getting me offstage, pleading for anyone who could sustain a drone to come onstage. Don Black rescued me. Don, however, had an advantage—he plays the oboe in a concert symphony.

Andrew grabbed the didgeridoo from me, kicked me off the stool, and told me to go sit on the edge of the stage, where I was handed a drum. Today was the second time in my life I’d ever even seen a didgeridoo.

Soon, Andrew and his two-man crew had the entire audience involved in playing music. Some like me, were given drums, others clapsticks and similar percussion instruments. That is how we
closed out the show. I will confess that I didn’t do much better on the drum than I had with the didgeridoo.

Andrew trying to get Gullible to play the didgeridoo....

Afterwards, I went to the front counter and handed over my Visa. 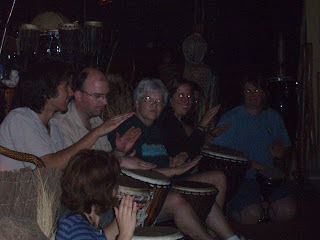 Then the clerk arranged for Andrew to talk with me about the didgeridoo I had just adopted. “You’ve made a good choice,” said Andrew. “This is a good didgeridoo and easy to play.” He then did just that, leaning the butt of the woolybutt (I love writing that!) didgeridoo on a step of the circular staircase behind him and making incredibly rhythmic music.

Andrew said something that night that completely changed my understanding of how to play the didge (as we players call them). The instrument itself, he explained, does not make a sound, as it is nothing but a length of eucalyptus tree trunk hollowed out by termites. Instead, it
amplifies the sound your mouth and lips make.

Gullible struggling with the drum.

You know the expression “loose lips sink ships?” Well, loose lips—the vibration of one’s lips and the sounds from one’s mouth—are what create the distinctive tone of the didgeridoo. It also involves inhaling and blowing at the same time! As for myself, I am still in the rude noises stage, but I am trying.

Not to big note, mates, but here’s the dinky-di: If I gobsmack meself and turn tall poppy with the didge, it’ll be my shout for the house or I aren’t worth a zack. An’, I don’t mean at Mackers, either.