roadhouses and other curiosities...

One of my favorite things about Alaska is the number of old roadhouses that are still open and operating. Just as with the pony express stations, many of the roadhouses were built a day's travel apart, whether by foot, horse, or dog team. Or maybe I'm just making it that up. Who knows?

Anyway, the photo below is one about fifteen miles from where I live, in the small town of Cooper Landing, which boasts one of the most phenomenal roadside fisheries in the world. It's a tributary of the world-famous Kenai River (home of king salmon approaching a hundred lbs.), and is called the Russian River. Two runs of sockeye salmon every summer bring hoardes of fish hungry people and bears to thrash the clear waters for the elusive orange-fleshed fish. It is, I think, the ideal icon for the term "combat fishing."

This lodge/restaurant/bar below, Gwin's Roadhouse, is a primary beneficiary of the salmon runs, and has served many a hungry fisherman and highway traveler. 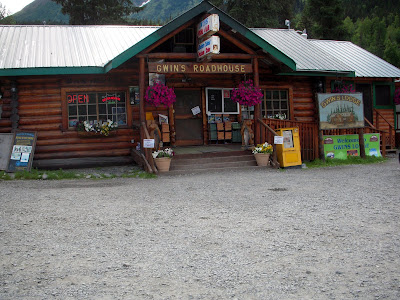 The McCarthy roadhouse, pictured below, is at the end of a long gravel road that starts in Chitina and ends at the river that separates McCarthy from the rest of the world, which is exactly the way most of the small town's inhabitants want it. To get across the river with your groceries, you load everything in a small tram, including the dog, and pull yourself across. The locals have been fighting the pro-bridge forces for eternity. (Feb. 24: Alas, I am sorry to report my McCarthy knowledge is obsolete. There is now a fancy walking bridge across the river....been there at least since 1991. Well, the anti-bridge forces did manage to keep out the vehicle traffic.)

Five miles up another gravel road is Kennicott, location of what was once one of the richest copper mines in the world, known as Kennecott. No typo there. The two are spelled differently, the result of poor proof-reading many years ago. The National Park Service is now the steward of the Kennecott mine ruins and is trying to prevent further deterioration. They are a spectacular place to visit, close to the confluence of the Kennicott, Gates and Root glaciers. In fact, you can stand in a window of one of the old mine buildings and hit the glacier with a rock. You probably won't realize it, of course, because this far down the glacier is covered with the crushed rock the ice pushes up in front of it.

That sixty-three mile gravel road I mentioned--the one that connects Chitina to the river bank across from McCarthy--that's actually the railbed of the long-defunct Copper River and Northwestern Railway (CR&NW). A more affectionate term for the railroad that was built to haul copper from the mine down the Copper River to Cordova is Can't Run and Never Will. The story of how the mine and railroad were built in the early nineteen hundreds is among the great stories of accomplishment against almost insurmountable obstacles. So, it's nice to sit in the McCarthy lodge and savor a cool one, along with the history. 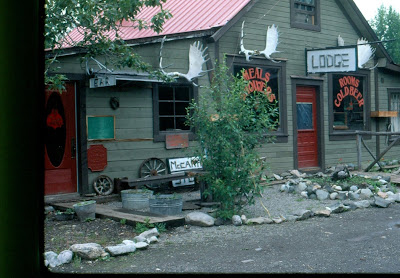 At the end of another sixty-some mile road is the town of Manley Hot Springs, named--you guessed it--because there is hot water bubbling outta the ground. The photo below is the Manley Roadhouse. The town of Manley is at the end of the Elliott highway, and is built within the floodplain of the Tanana River. A ways downstream, the Tanana flows into the mighty Yukon River.

This country is called Interior Alaska, because it's in the central area of the state. Compared to the southcentral coast of Alaska, with the Chugach and Kenai mountains and the Alaska Range, this is flat land country with its rolling hills covered in spruce, birch, aspen and cottonwood. Mind you, the locals don't consider it flat. It's all in your own personal perspective, I guess. On the other hand, to get to Manley, you go to Fairbanks and turn north onto the road that parallels the Trans Alaska Oil Pipeline. If you look south before you turn north, you can see Mt. McKinley.

Of course, you can also stop your car on the O'Malley Road overpass of the Seward highway in Anchorage and see McKinley, too, so take your pick. Plus in Anchorage you have Cook Inlet, Mt. Susitna, and volcanoes Mt. Sprurr and Mt. Redoubt, etc. So there, Fairbanks. It's also dog-gone cold in the Interior, and temperatures above and below minus fifty degrees are not uncommon. In Anchorage, thirty to forty below is uncommon. Not unheard of--just uncommon. That's during the winter, you understand, which is the time between mid-October and mid-April. I'm exaggerating only a wee bit. 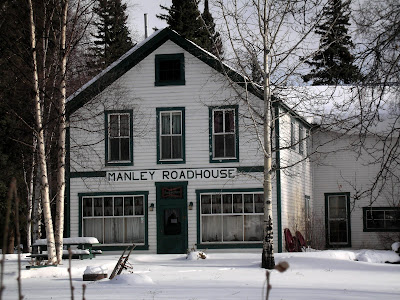 This little beauty, which unfortunately isn't open anymore, is located in the ghost town of Chitina, which isn't a ghost town at all, but what does one call an old, old town that has ghosts painted on the walls of buildings. Chitina is the point of access to the Copper River, and the river is the spawning grounds of the famed Copper River red and king salmon. Every spring restaurants across America compete to have the first Copper River salmon on their menu--and the price is dear.

For Alaskans, it's the place to load up on the fish by dip-netting. That's exactly what its name says--you stand in that freaking dangerous river and dip the salmon out with a long-poled net. Or, if you're smart, you take one of the river boats downstream. The operator knows the best spots to drop you off, and you stand on the rocks and pull the fish out. Much safer that way, but then, hanging onto a long thin aluminum pole with a sixty-some pound king salmon going berserk in the net isn't exactly OSHA approved. 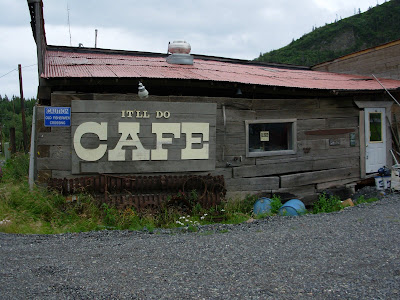 Okay, I've forgotten the name of this one. It's located on another gravel road called the Denali highway, which used to be the only entrance into Denali Park, where you can get up close and personal with Denali (known to everyone outside of Alaska as Mt. McKinley), tallest mountain in North America. I've sent an emergency e-mail to friends who have a ranch a few miles from this place, asking them its name.

If I were at home, I could just look it up in The Milepost, a book that contains almost everything you want to know about Alaska. But, I'm not at home. I'm in Halibut Cove and there are no Mileposts here that I can find. The cove, by the way, is across Kachemak Bay from the end of the Homer spit, where sits the legendary Salty Dawg.

Through the miracle of wireless DSL and e-mail comes the name from Bob: Gracious House. This one isn't a roadhouse, but it's one cool watering hole anyway. Also at the end of a road, only one that is paved, this is the afore-mentioned Salty Dawg in Homer. There are a number of end-of-road communities in Alaska. Homer is one of them, and proud of it. Homer has the additional bragging rights to the Homer Spit, which is a five mile long bar of gravel that sticks out into Kachemak Bay and essentially marks the division between the clear waters of the bay and the silty waters of Cook Inlet, and you'll find the Dawg out near the end of the spit. It's one of the great old-time saloons, complete with sawdust on the floor. At least, it was the last time I was in it, which I'll have to admit was a few years ago. Like, maybe, twenty.


The Sterling highway ends here in Homer. Oddly, it starts a mile from where I live, or at Mile 37 of the Seward highway. So what is the beginning milepost of the Sterling? Mile 37, of course. I could tell you a few other mind-numbing facts about the junction of those two highways, but they make absolutely no logical sense to me, and I've lived here for sixty-one years, so I'll just skip over that for now.
.

Incidentally, notice the bald eagle on the top of the Salty Dawg? It's one of hundreds that have congregated in Homer every winter for the free fish guts handed out by a local character named Jean Keene. Because it's against the law to feed wild animals and birds, by the time the law got around to noticing that Jean was feeding the birds, she'd been doing it for so long that she and her eagles were a world-famous institution, so Homer gave her a special dispensation to continue feeding the eagles until she dies. (Be pretty hard for her to do that afterwards, wouldn't it?)
.
Well, Jean died a couple months ago and there was much concern about what the eagles would do for the rest of the winter, not to mention the local business people who reply on the hoards of amateur and professional photographers who come to Homer to focus their lenses on the magnificent welfare-dependent eagles. Anyway, Jean's assistant is now allowed to continue feeding the eagles until the end of March, and then the eagles have to go back to being wild eagles. 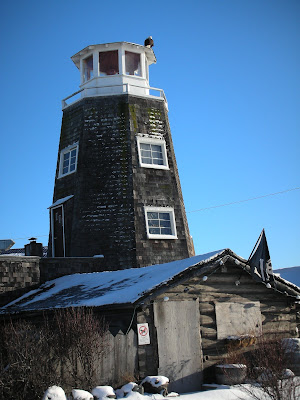 Below is a view of Sheep Mountain Lodge, one of the old highway lodges that's been updated to cater to tourists. It's in the mountains north of Anchorage on the Glenn Highway, and is surrounded by some of the most jaw-dropping scenery along that highway. Below it is a photo of some of the cabins there, and I posted the photo just to show more of those mountains behind the lodge. 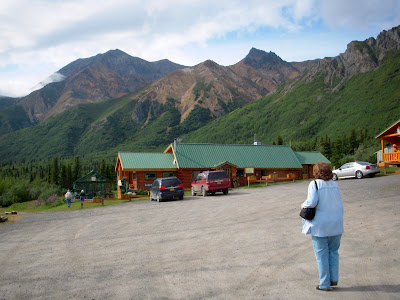 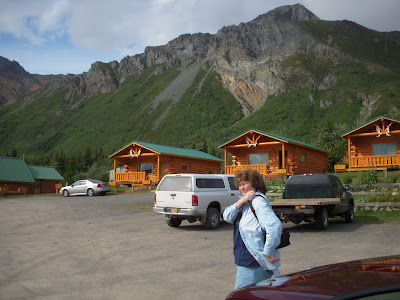 And my last photo is of another Alaskan institution--the Bird House. Somewhere on the hard drive of my computer there lurks a photo of the original Bird House, which was in an OLD cabin about twenty-five miles south of Anchorage near the settlement of Bird Creek. Unfortunately my computer is in one of its moods, and is refusing to divulge the location of said photo. The original burned down a number of years ago. No surprise there--it had been a fire waiting to happen for forty years. There was much mourning and grieving at the loss of this fine establishment.

Ah, but an enterprising high school classmate of mine, I am proud to brag, built an exact replica at his establishment in Anchorage. He tacked it onto the back of Chilkoot Charlie's, and now we old-time Birders can relive our youths at this wonderful bar. Gives new meaning to the description of being "a birder," doesn't it?

I've a story buried in a Word.doc about the Bird House. I'll see if I can find it, along with some photos of the interior, and post it here soon. 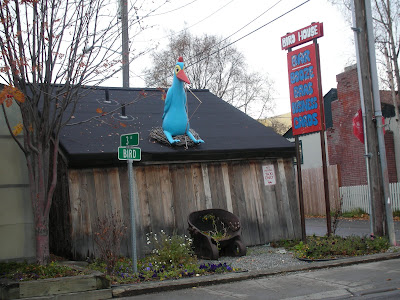 These photos, by far, are not all the old roadhouses and quaint bars located on the few highways of Alaska. Many have burned to the ground, some in the great earthquake of 1964. Many are wonderful creations of log and whatever materials were available at the time. Some have gotten a bitty uppity and don't want to be called roadhouses anymore, which I consider a shame, because the roadhouses of yore were fine and necessary places for the weary sourdoughs and cheechakos that built this country.


Long live the roadhouses!
Posted by Gullible at 6:10 PM