The following photos are from a private collection of pictures taken shortly after the 1964 earthquake in Southcentral Alaska. While images similar to these have been published, these pictures have never before been seen in print or online.

The photo below, as well as the many taken of the same structure, is an iconic image of the earthquake damage in Anchorage. This is the fairly new J.C Penney building on Fifth Avenue in Anchorage. The pre-fabricated concrete slabs that made up the exterior of the several story building peeled away during the quake, crashing to the sidewalk and street below. At least one casualty occurred as a slab crushed an occupied vehicle. This photo was taken several days after the quake, when cranes had been moved in and a safety wall built around the ruined structure. 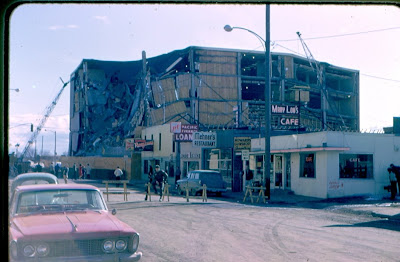 N0 more Saturday afternoon matinees at this theater. The marquee now sits at the same level as the main street of Anchorage, Fourth Avenue, as do the rest of the buildings. This also is an iconic image of the damage in Anchorage. 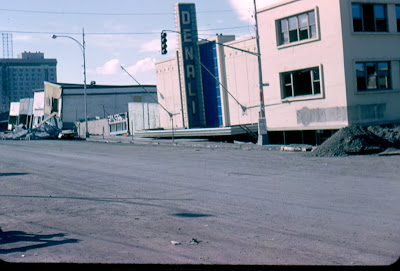 This is a view of the same block, from the other direction. Notice that the fault took a big bite out of the street here. I was down in some of those buildings after the quake, just looking around. 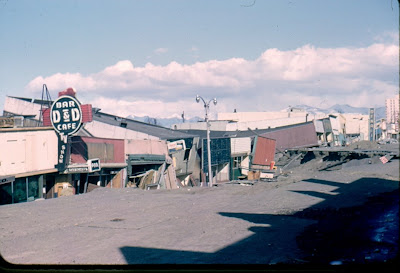 Below is what was left of the Four Seasons apartment building at Ninth Ave. and L St. Construction had just been completed on this upscale building, and tenants were to move in soon. That's the elevator shaft still intact, while the rest of the building lies in ruins. 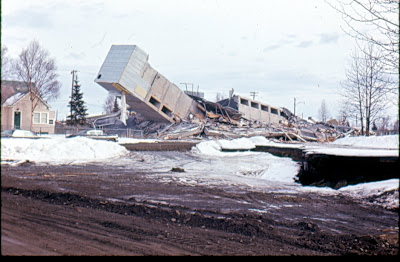 Fault lines ran crazily through Anchorage. Some buildings weren't damaged at all, though they ended up a number of feet below street level. The fresh gravel on the left appears to be emergency fill brought in to make the street passable. 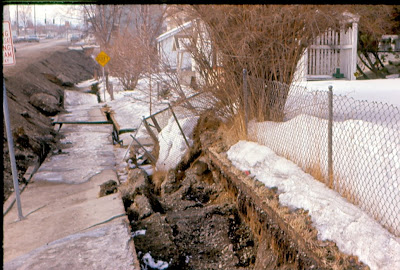 On the other hand, some homes didn't fare too well. Note the sidewalk to the front porch suspended in air--nothing below it. 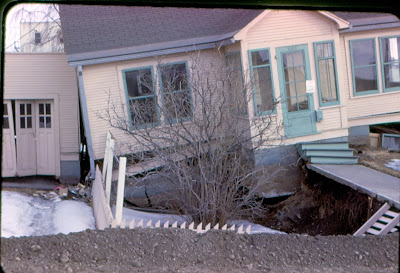 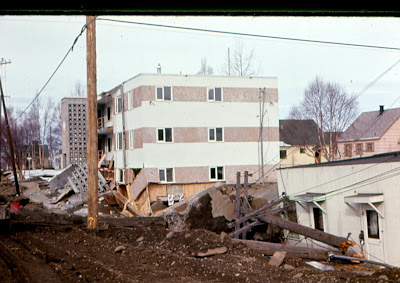 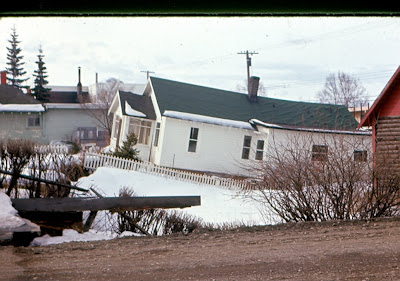 This is what happened to Government Hill School. It used to be all on the same level. The quake occurred near 5:30 on Good Friday afternoon. It was a school holiday, and most people were in their vehicles heading home after work. That is one of the reasons only thirteen people died in Anchorage, even thought the physical devastation was immense. 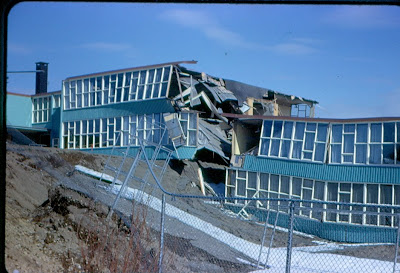 This is the front view of the Hillside apartments at 16th Avenue and H St. I had friends who lived in this building. The interior walls between apartments were concrete. When the walls began to crumble, a block fell into their new baby's crib, but missed the infant. 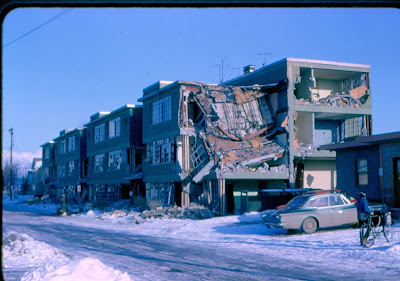 And here's the back side. 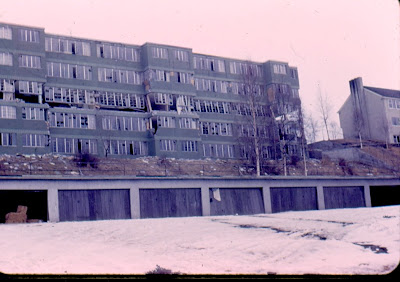 This is one of the two 14 story buildings in Anchorage. Notice the "X" cracks. This building is in use today. It has been known by various names, including the McKinley Apartments and the Denali Building, if memory serves correctly. After the quake it was purchased by an attorney named Neil Mackay and "enjoyed" a long run as the eyesore of the city. In recent years it was repaired and reopened as an apartment/office building.
It's sister building, located across the city proper on L Street, was quickly repaired and reinhabited. I had a girlfriend who rode out the quake in her tenth floor apartment as the building swayed back and forth. She said the water in the toilet was sloshing out of the bowl. This is one of the reasons I don't care for multi-story buildings and elevators. 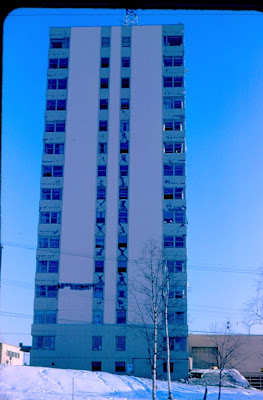 These pictures don't begin to do justice to the devastation a five and a half minute earthquake reaching 9.2 moment magnitude can do. But, they might be enough to give me nightmares tonight. It's only been in the past few years that I don't jump out of bed and run during earthquakes. I do, however, still hold my breath....