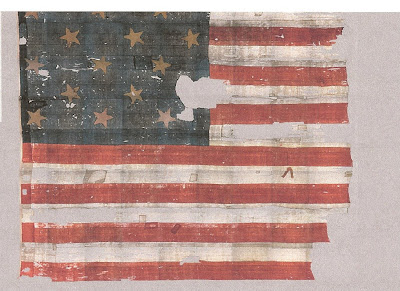 (The following information, as well as the photograph of the flag that flew over Fort McHenry in 1814, is copyrighted and can be found at:
http://americanhistory.si.edu/starspangledbanner/interactive-flag.aspx. This notification is presented to comply with the permission of use requirements as set forth at that site.)

1. The blue field of the flag is called the union or canton.

3. Before the flag came to the Smithsonian it had been repaired many times by many hands.

4. The canton is made of wool dyed with indigo.

5. The cotton stars were created by reverse applique' method. Each star was stitched into place on one side of the flag and the cloth on the other side was then cut away to reveal it.

7. [The ragged edge] is the "fly edge" of the flag. By the time the Star-Spangled Banner came to the Smithsonian in 1907, more than eight feet of the original length had been lost due to use and deterioration--and to the fact that many small fragments of the flag were snipped off as patriotic keepsakes.

8. The stain on [one] star resulted from contact with corroded iron, probably a metal buckle.

9. One of the flag's fifteen stars was cut out and given away in the 1800s. Its present whereabouts are unknown.

10. The red stripes are made of wool dyed with the roots of the madder plant.

11. The stars are made from cotton.

12. Georgianna Armistead Appleton, daughter of the a814 commander of Fort McHenry, inscribed the flag: "This precious relic of my father's fame..."

13. Mary Pickersgill, a professional flagmaker in Baltimore, made the Star-Spangled Banner in the summer of 1813. Four teenaged girls--her daughter, two nieces, and an African American indentured servant--helped piece together its "broad stripes and bright bars."

14. In 1873, the damaged flag was attached to canvas sailcloth so it could be hung for a photograph. When the canvas was replaced with a linen backing in 1914, [a] tiny piece of canvas was left to document the past conservation.

15. Older mends that placed harmful stresses on the flag were removed in 2002.

16. In 1914, Amelia Fowler and a team of ten needlewomen attached the flag to a linen support. When conservators removed the backing in 2001, holes from Fowler's stitches remained.

17. [An] "A" (see white stripe) was reportedly sewn onto the flag by Louisa Armistead, widow of the 1814 commander of Fort McHenry.

18. Some of the fragments that were snipped off as mementos have been donated to the Museum.

19. The goal of conservation is not to restore the flag to its original condition, but to preserve it for the future. [Some h]oles were not mended in the conservation process.

20. The stripes of the flag as made from wool bunting from England.

21. In 2002, conservators snipped 1.7 million stitches to remove the linen backing that was damaging the flag.

22. Each 23-inch-wide stripe was pieced together from two narrow stripes.

23. Many smaller holes in the flag that were originally attributed to shot and shrapnel from battle were determined to be the result of insect damage.

24. The original flag measured 30 x 42 feet. The flag now measures 30 x 32 feet. The loss is attributed to use and deterioration--and to the fact that many small fragments were snipped off in the 1800s as patriotic keepsakes.

25. The flag's fifteen stripes represent the thirteen original colonies and the next two states to join the union, Kentucky and Vermont. 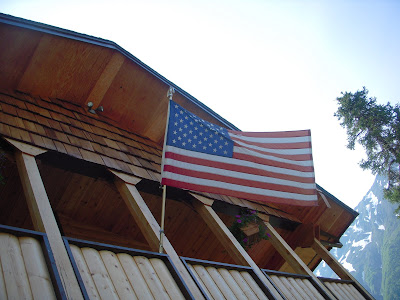 The flag flying at my home. 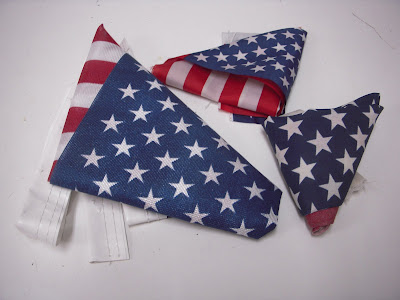 Vehicle antenna flags I found while picking up litter alongside the highway, each saved, folded correctly, and treated with respect.