Gosh, it's hard to leave Alaska right now. Especially now that summer finally arrived. The last two weeks have been stunningly gorgeous, even with an early morning fog that burns off by ten o'clock. 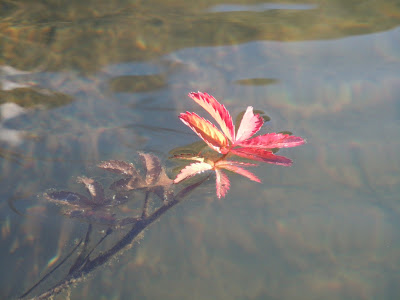 The lakes have been beautiful. The wind that whipped through here the past few months decided to calm down and relax, and my kayaking trips have resulted in pix like the one above.

I finally got all the chores done and finished packing. Proof: 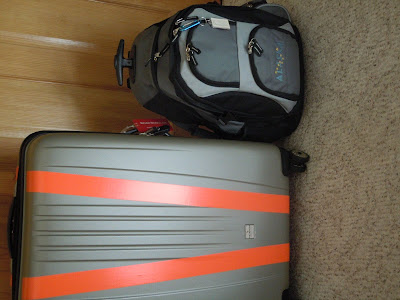 Look, let's just pretend that this photo is in the right direction, okay? I'm tired of fighting with Picassa about it.


Pretend this one is upright, also. I got this at the state fair. It's a backpack on wheels, and it's my carry-on. 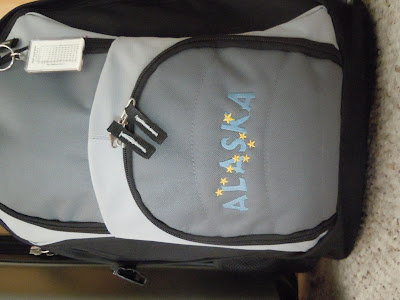 I don't have the heart to rip out the begonias, so I just put the pots in the garage so the tubers can dry. 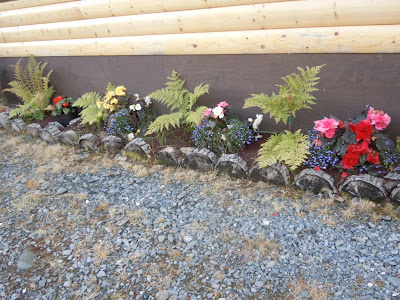 This morning I made a final trip to the dump and the post office. As I broke over the top of Mile 34 hill, I saw the morning fog had combined with smoke from the latest Forest Service "controlled" burn. Except, ever since they lost control over a couple of them a few years back and almost burned down one of their own campgrounds as well as the settlement of Crown Point, they've been calling them prescribed burns--or maybe it's proscribed burns. Whatever. 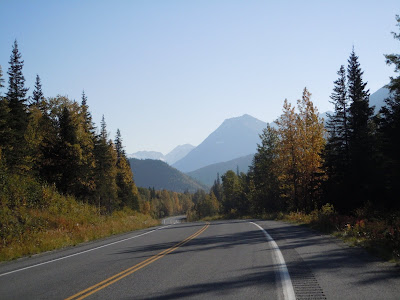 Anyway, the smoke in the air added depth and definition to the mountains, kind of a nice look. Reminds me of the Great Smoky Mountains and the Blue Mountains in Australia. The tour guides tell you the blue in Australia comes from eucalyptus vapor in the air, but there's more to it than that.  The oil terpenoids scatter incoming ultraviolet rays and that causes the blue haze.

Nonetheless, the smoke and clearing fog set up a fine shot at Trail Lake. 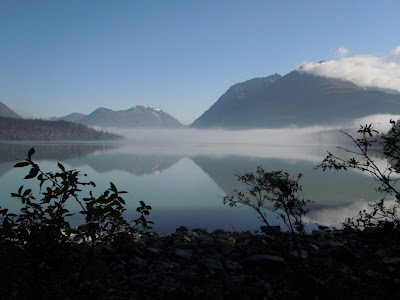 Well, chores done, house clean, Pablo at the parrot-sitter, and my bags packed, we headed for Anchorage to drop me off at the Puffin Inn for the night, prior to my morning flight to Seattle and on to San Francisco. I checked in and signed up for the 9 a.m. shuttle to the airport. Now, where else would you have to fill in the last column? 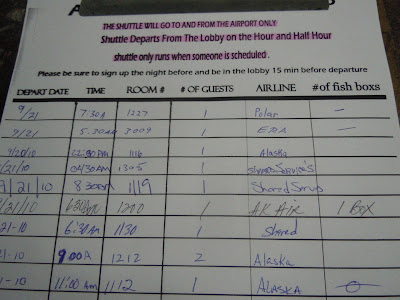 Alaska Airlines has decorated their overhead luggage doors with a mural of all the various seafood available from Alaska. This is just one door. 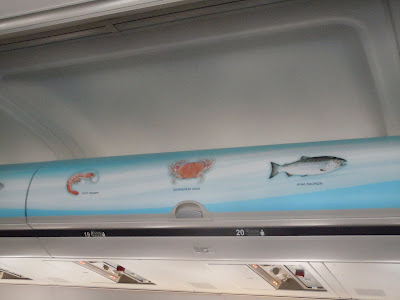 Perfectly lovely flight to Seattle. Look at all those glaciers flowing together. Three percent of Alaska's surface is covered by glaciers, and Alaska has more than half the glaciers in the world. 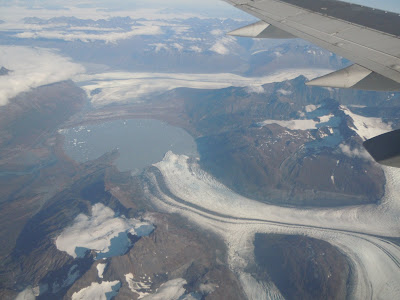 Later.
Sea-Tac is in security lockdown. No planes moving, no boarding, no nothing. There's been an incident. Finally we get the "all clear" to board.
Just as I'm about to step into the plane, an "aircraft maintenance" man slips ahead of me and into the cockpit. Oh, man. Just what I don't need to see.


Travel is a journey of discovery, and here's what I've discovered so far:


1. I brought the travel clock with the broken alarm.


2. My lap top will not hold a charge, nor will it take a charge.


3. If you rudely yank the battery from the laptop and then just as rudely slam it back in its place, it will start behaving.


4. If you don't use your laptop for a while, it won't shut off when you need it to so you can board your airplane. It's busy installing update 32 of 45.


5. Alaska Airlines has up-graded its onboard food items for sale and now offers an awesome roasted vegetable ravioli with a basil cream sauce, served with a warmed soft breadstick. It also carries my beverage of choice--Coke Zero.


6. I continue to be as disorganized as ever during the initial phases of my trip. As soon as I learn where everything wants to live, I get much better at this.


Okay, midnight on the motel clock. Have to catch the 9 a.m. shuttle to San Francisco International terminal for the flight to China.


You might not hear from me for a while.


Ah, discovery--'tis quixotic as ever.