Can Four Wrongs Make a Right? 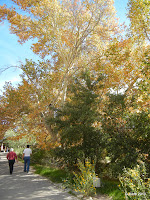 Along the meandering green water of a creek flowing through the Verde Valley of northern Arizona, bright yellow maple and sycamore tree leaves float softly to earth, covering the desert soil near the base of towering white limestone cliffs. 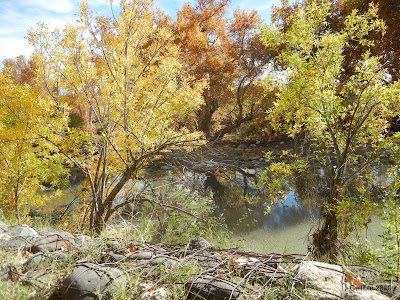 Through the dense brush at the edges of Beaver Creek, past the salt bush and night-blooming datura, and across wide asphalt pathways, a migration is under way. Upwards of a hundred venomous snakes, and perhaps many more, slither through this area in the spring and fall.

Diamondback and blacktail rattlesnakes, even the occasional coral snake, leave the cooler climes of the creek bottom for the holes and crevices of the limestone, seeking sanctuary in the warmth-retaining rock.


The lavender tipped trumpet-shaped flower of the night-blooming datura, alive and well in cooler day temperatures.

The visitor’s center of Montezuma’s Castle National Historic Monument nestles in this shady dell, up against the white face of limestone. Almost a hundred years ago, in 1906, President T.R. Roosevelt set aside this spot for preservation. 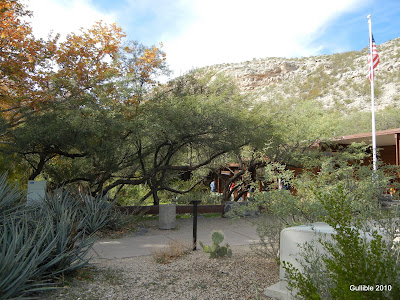 Apaparently no one knew about the rattlesnakes’ migration at that time. After all, it hadn’t been too many years since the U.S. Cavalry had wrested the area from the Native American tribes that had been living there for centuries.

One of those earliest tribes had been the pueblo-dwelling Sinagua, who inhabited the Verde Valley until around 1400 A.D., then mysteriously disappeared. While they were there, however, they built a stone and mortar cliff dwelling high up in the ledges and caves of a vertical limestone face. They used irrigation canals built by the preceding Hohokams (ca. 700 A.D.) to raise crops. 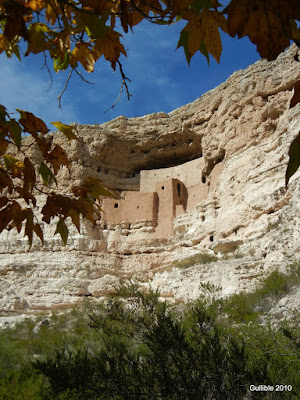 When European Americans traveled into the area, they mistakenly believed the Aztec emperor Montezuma II of Mexico had journeyed this far north, and they dubbed the place Montezuma’s Castle. A few miles away, a natural limestone sink that every day fills with a million gallons of warm, sweet water, became known as Montezuma’s Well.

A larger dwelling lies in ruins at the base of the cliff, but high on the cliff face, protected from rain and snow by a natural overhang, the structure that housed perhaps fifty people remains. 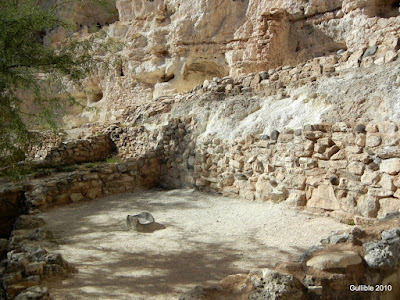 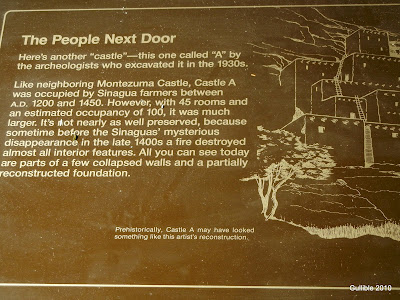 The Sinagua took advantage of holes, caves, and ledges in the limestone and incorporated them into the five-story, twenty-room dwelling. 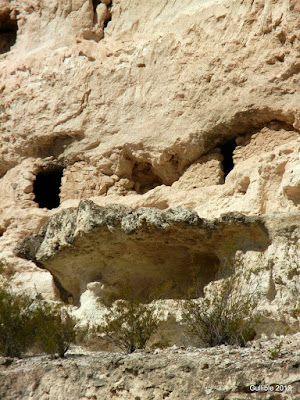 When preservation efforts began, so goes a local story, a man ordered the mortar material. When it arrived, it was the reddish color of nearby Sedona rock rather than the white limestone of the Verde Valley. 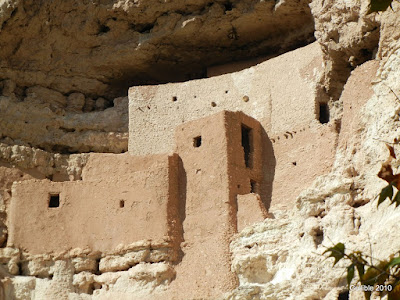 Notice the difference in colors. The darker color marks the preserved areas.

When I heard this tale, I was reminded of a sign posted prominently at the paint counter of a major builder’s supply house in Anchorage, Alaska. It reads: Husbands buying custom paint colors must have a note from [their] wife.


As for the snakes, modern technology has invaded their prehistoric realms. Rangers catch the snakes and implant microchips under the fat layer in the snakes’ backs. Thus, the miniature device is not lost when the snake sheds its skin.

Whenever a snake is spotted in the vistor’s area, it is caught and scanned, and the information recorded. In one recent week, five snakes were spotted, two were caught, one of which was a large four-foot rattler that had never been chipped. Chips have been implanted in approximately a hundred snakes. 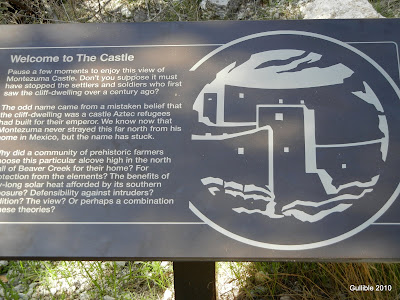 Well, the inhabitants of the area in the late nineteenth century took exception to the hordes of settlers invading their lands, for one thing. To the Yavapai (Wipukyipai) and Tonto Apache (Dil zhe’e) who considered the earth a living thing, the settler’s notions of land ownership was appalling. Frequent hit and run raids, aimed at discouraging settlement, soon brought the blue coats of the U.S. Cavalry .


Inevitably, the tribes were subdued in 1871 and placed on the Rio Verde reserve. Then, in the mid-winter month of February, 1875, the Indians were uprooted again. Rather than traveling the primitive roads of the wagon trains, men, women and children were forced to walk 180 miles, through cold rivers and rugged mountains. Hundreds died. Today this horrendous hardship is commemorated as Exodus Day by descendants. 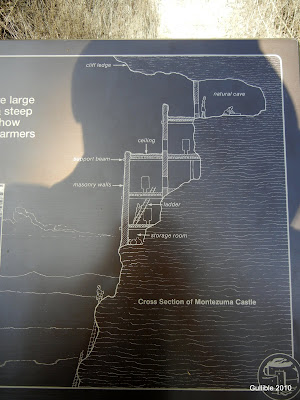 Those that survived were placed on the San Carlos Reservation and held as prisoners for twenty-five years. Finally, around 1900, those still alive were released. All their treaty-guaranteed land was gone, now in the hands of settlers and developers. 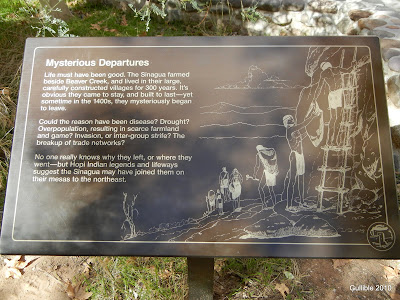 Eventually the descendents became the Yavapai-Apache Nation, a sovereign Native American tribe. Four parcels of land in the Camp Verde area were acquired, totaling 665 acres, and including much of the townsite. In 1995, they opened Cliff Castle Casino in Camp Verde, which is now the area’s largest employer. 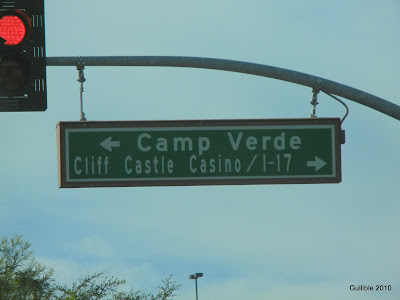 When you own most of the town, you can hype your business anywhere you want.

As to the long-term ramifications of gambling on an already endangered culture, only time holds that secret and time will eke out its truth gradually. 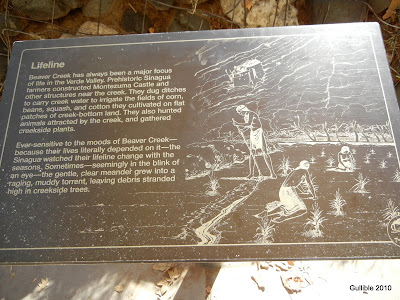 For now, Montezuma’s Castle National Monument provides a fascinating look at one of the best-preserved cliff dwelling sites in America. Despite the number of mistakes made over the years, somehow it all came out okay. Even the thousand-year-old irrigation canals are in use today.

Close enough to I-17 to be convenient, yet far away enough to be quiet, the site sees approximately 350,000 visitors a year. 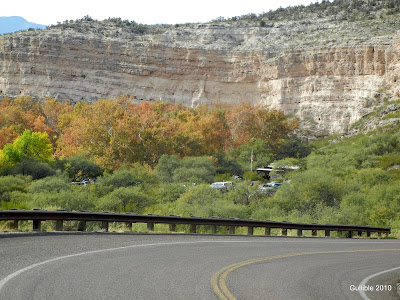 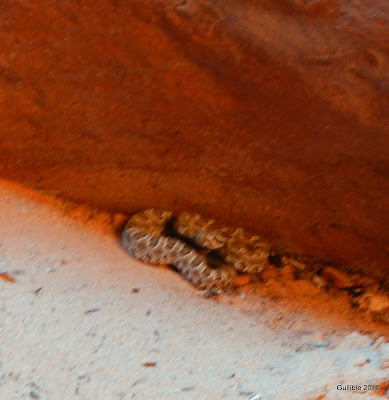 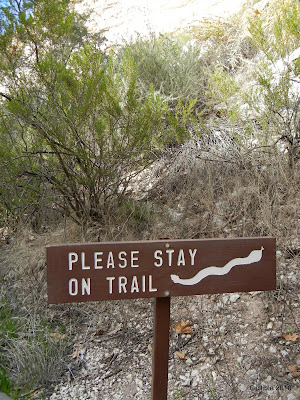 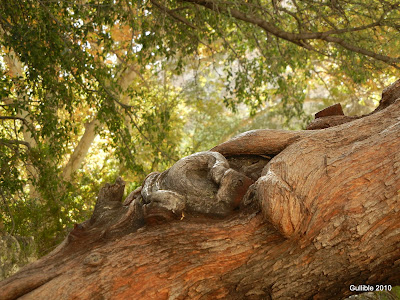 When you know they're there, everything looks like a snake, even this burled spot where a tree branch once grew.