It's probably a good thing I didn't check in with my house-sitter until after my flight from Arizona reached Seattle Saturday evening. The rain blasting into the landing light under the Boeing 737's wing was an omen of things to come. 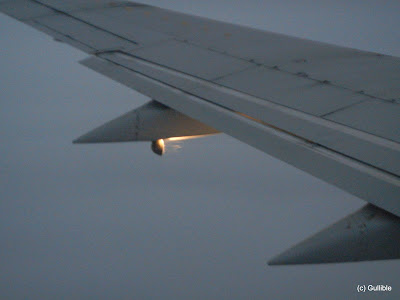 Rose, my house-sitter, warned me there were 16 inches of snow on the ground at home. Blech! I found Anchorage didn't have that much, but then the temperature late Saturday night was 37 degrees. My truck was stored at the motel where I would spend the night, and I didn't even want to look at it until morning. I didn't take this picture until I'd started it, let it warm for a few minutes, then moved it to the motel exit closest to my room. 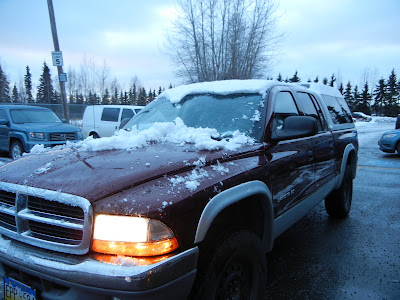 I moved through the rest of Sunday in a daze, just trying to stay awake until a reasonable time in the evening (i.e., after Desperate Housewives).

This morning, near 9:30, I was standing in the living room when I heard the "Welcome Home" roar start. Like "The Wave" in a sports stadium, it got louder and louder and my living room began to quiver. Then, with a huge jolt and shake and lots of creaking, it reached its loudest.

See the red spot on the map below? Not the orange one way up at the top--the red one near the southcentral area. Can you guess what it means? 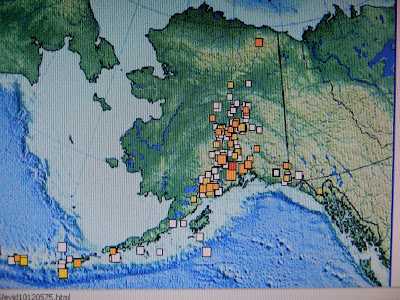 It means, "Welcome home, Gully. Here's a 4.7 earthquake just to remind you where you live." The epicenter was about four miles northeast of my place, which was why it was so loud and so sharp. I would have guessed it at a 6 or 7, not a puny 4.7.

Oh, and all the other little boxes on that map? Only some other quakes in the previous 24 hours....

PS: I forgot to snivel about the 26 degree temp today and whine about the 15 to 35 mph winds out of the north.
Posted by Gullible at 2:48 PM