A little learning is a dangerous thing;
drink deep, or taste not the Pierian spring:
there shallow draughts intoxicate the brain,
and drinking largely sobers us again.
--An Essay on Criticism, Alexander Pope (1688-1744) 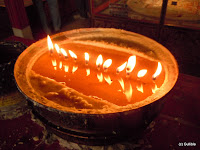 I had to laugh at the Groupon commercial shown during Sunday’s Super Bowl.  It began with a voice saying the Tibetans are in trouble.  I missed the rest of the words as I was caught up in the photo of the in , taken from an unusual angle.
Yak butter candles
Next thing I saw was Timothy Hutton sitting in a restaurant saying, “But they [Tibetans] can still whip up an amazing fish curry.”
What’s so funny? 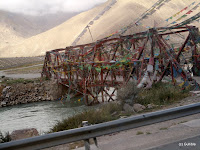 Because the Tibetans believe in rebirth, or reincarnation, they do not eat fish because they might be eating their relatives by doing so.  All this info came from my Tibetan guide; I'm not making it up.
A bridge festooned with prayer flags.
And to prove the rule there is an exception.  Tibetans who have been unable to have children will fish for and eat a fish, believing that it will help a couple conceive.  Following this trail of rationale can lead one in interesting directions. 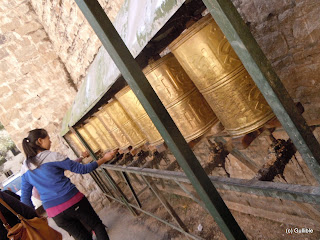 Fish curry?  What?  The hot curry is to drive out the spirits of grandpa and grandma?
Tibetan prayer wheels

PS:  I hope I am not the one who has lightly sipped the waters of the Pierian spring.

PPS:  Ah, ha!  My first clue:  An anonymous commenter tells me the ad was for groupon.com not hotels.com.  I said I was paying attention to the photography and not the words, didn't I?  So, I changed the first graph--after researching it which is what I should have done in the first place.  I'll tell you, a bit of hearing loss can lead to some amazing conclusions.