I had something I really needed wanted to do in Anchorage today, something that I required finishing and in the mail in time for Christmas.


But, the electricity was still out from Tuesday mid-afternoon and I didn't want to leave the house unattended because it might cool off too much for that green and yellow (and red and pink and orange and blue and indigo and aqua and peach) dynamo I call Pablo.  So, when it was still out at 4 a.m., I decided I would stay home and keep feeding the woodstove.


The weather couldn't have been nicer--clear, sunny and about 20 degrees.  The road surface was sheer ice, but cold ice which isn't as slippery as warm ice.

I haven't been in this direction since the last few storms hit was surprised that the snow banks on the highway shoulders were four feet high, but seemed about the same in Turnagain Pass, where it usually snows much more.


And driving down to saltwater at the bottom of the Pass, there's always this spectacular sight.  That's Twenty Mile Glacier in River in the far distance.  The water is Turnagain Arm (remember Capt Cook and William Bligh?). 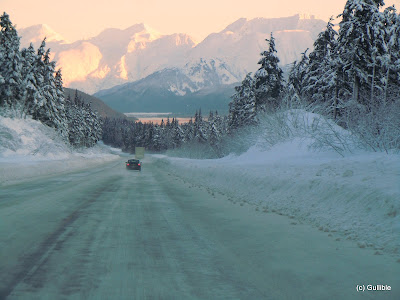 Ah, but the real treasure was at Mile 105.  Twenty feet off the edge of the highway was this sight: 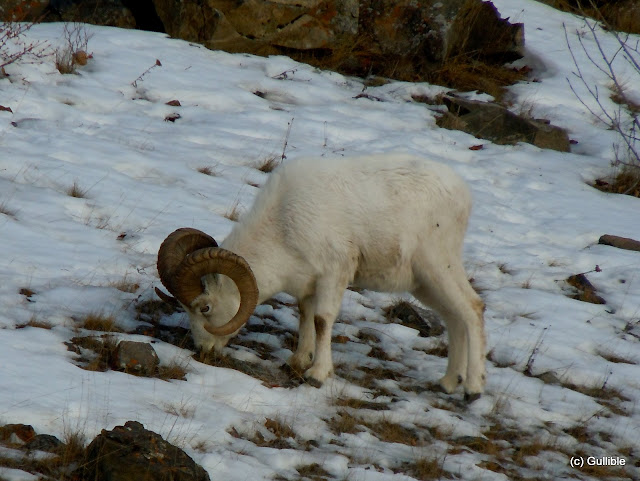 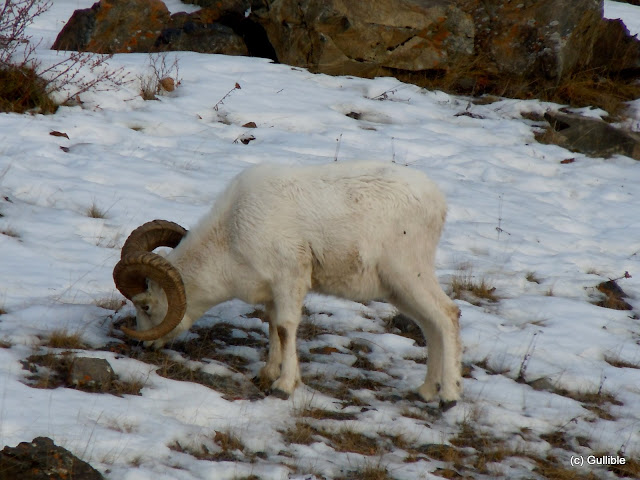 I was told there's a natural salt lick right in this spot and this is why the sheep come down off the mountain.  I could see him licking something and thought I saw liquid.

The sheep are protected in this area, not subject to hunting.  They couldn't care less about the people who stop to watch and photograph them.

I got my chores done in town, got things in the mail, and called my neighbors to see if the power was  still on.  The answer was no.  It hadn't stayed on after I left for Anchorage.

Imagining a ticked off parrot at home, I dropped all the other errands on my list and headed south.  This is the way the story ends:  the house was at 68.5 degrees, which is where I usually keep it.  Pablo was angry about me being gone, but warm.  A peanut M&M got him over his mad.  He did require some extra cuddling, though.
Posted by Gullible at 10:27 PM