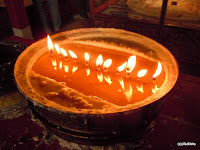 Each night as I wait for sleep to steal my consciousness, I play a word game on my Kindle.  It is much like a combination of Crosswords and Scrabble for one player.

Like those games, it favors words one rarely, if ever, uses in normal conversation, words like haen, caden, hace, and, my favorite, sera.  I think of wild pink roses and Tibet as I type the letters s-e-r-a into empty spaces.  I remember children with black smudges on the tips of the noses on their way to see the monks of Sera Monastery and have their naughtiness—if there is any−expunged.

One recent night, I was working at the computer and remembered that I wanted to look up the definition of sera.  In English, sera is the plural form of serum, the amber colored, protein rich fluid that separates out when blood coagulates.  Then I did some research on the Sera Monastery in Tibet, and went to bed.

Sleep was elusive that night.  Near three in the morning, something drew me to the loft.  There on the computer monitor was a photograph of Sera Monastery, one of the random photos my screen saver shows in a constantly changing montage.  There are four photos of Sera Monastery on this particular computer, just one of thousands of photos of people and places the screen saver could have selected. 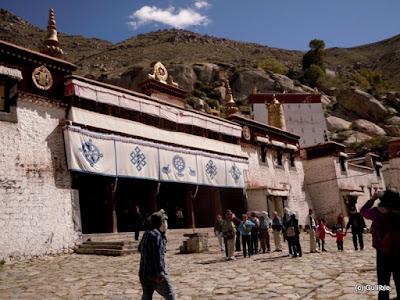 Weird, I thought.  I lingered at the computer until I thought I might find sleep.  The image of white stone walls and black-trimmed windows of Sera Monastery followed me down the stairs and lay on the pillow with my thoughts until the arms of Morpheus drew the curtains closed.

The next day, it happened twice again.  Each time I went to the loft, that same photo of Sera Monastery was having its moments on the screen.  Then off we’d go to the Grand Canyon or St. Petersburg or the Great Barrier Reef.

This was getting downright spooky.  Coincidental?  I don’t believe in coincidences.  While I do think there may be some validity to mind over matter, I seriously doubt that my mind has even an iota of control over this computer.  Yet, all I’d done was Google Sera Monastery and sera.  I hadn’t opened the file of Tibet photos nor done anything else to invite that particular photo.  None of the other three, mind you.  Just the one that is my favorite. 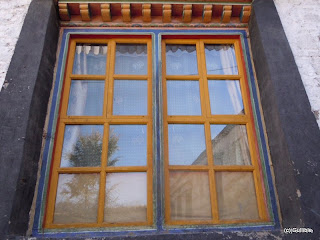 Yesterday, another of the Sera Monastery photos made its appearance.  This one is of a window.  I do that a lot—take photos of windows and doors and gates and locks and doorknobs.  And brooms.  I have several photos of brooms.

What can I take from all this?  I really don’t know, except maybe I am supposed to show you photos of Sera Monastery.

And so I shall.