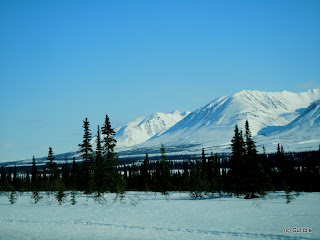 We're going to pull over on the side of the road on our way to Fairbanks and take a little break.  Writer and online writing instructor Ann Linquist piqued my muse when she posted her latest prompt for her former students to play with.


It was a dark and stormy night.  Ann had been up late working as was her habit.  But she’d never come to bed.  At 3:30 a.m., her husband climbed the long steps to her study in the silo, but oddly she was not at her desk. All he found was the regular shifting of pictures on her screen saver and a half empty glass of tea.  When he clicked the mouse, he saw the page she’d been reading—some postings on her blog.  Her ear phones lay on the floor.  Everything else looked normal except for the double-hung window in the bathroom.  It had never, to his knowledge, been opened.  Now cold air swarmed through the bottom half.  He peered down into the yard below.  Even with the full moon, there was nothing to see but untrammeled snow.  John pulled his cell phone from his bathrobe pocket and called 911.


And, what my muse came up with at 2 A.M., which is her favorite time for me to take dictation from her.  This was, for me, an exercise in advancing a story through dialogue alone.

“So, John. It is John, isn’t it?” said Mike Steele of the Piedmont County Police Department to the man in the green terrycloth bathrobe. “You say your wife is missing?”

“My cell—my iPhone. I have it right here in my pocket.”

“You always carry your cell phone in your bathrobe pocket, John?”

“Well…. I… Uh… No, not usually. For some reason when I saw my wife wasn’t in bed with me, I grabbed my phone. I don’t know–call it a premonition that something wasn’t right and I might need to call for help.”

“Uh-huh. So, John, do you mind if I call you John? Okay, so, John, when you called 911, you told the dispatcher your wife Martha was missing. Now you say her name is Ann. So, which is it, John? Martha or Ann?”

“You seem a little confused, John. Ann or Martha, Martha or Ann? Or maybe you have two wives. Are you a bigamist, John? Maybe one of those Mormon guys who gets to have all those wives? Not that I’d blame you, John. You dog, you.”

“Martha is a fictional character that my wife—ANN!—uses in her writing lessons. She isn’t real.”

Steele fixed John with one of his namesake laser stares. “Which one isn’t real, John? Ann or Martha?”

“Look, John. Is it possible that neither of them is real?”

“What? No. No, of course not. Ann is real. Ann is my wife. She’s a writing instructor and she works late up here every night.”

“No. What? What are you trying to do? Of course I don’t MAKE her work up here. It’s her choice. And the only reason it’s cold is because the bathroom window is open and letting in all the cold air. That’s what I told the 911 person. That window has never been open before. I could never get it to budge. Now I can’t get it shut.”

“Why did you try to shut it, John? Want to make sure your fingerprints were on it in case the crime scene techs found them anyways?”

“No! I don’t understand why you’re treating me like a suspect. You should be trying to find my wife.”

“Uh-huh. And you don’t have any idea where she is or how she disappeared from here. We must be, what? Thirty feet off the ground up here? No sign of disturbance in the snow below the window. One car in the driveway. Your wife have a car, John?”

“No, we both work from home. Whenever she needs to go somewhere, we go together. No need for two cars.”

“Uh-huh. No car, no sign of a disturbance either up here or down there, and you can’t keep her name straight. We seem to have a problem here, John. See what I mean?”

“Like I said, we have a problem here. You said you would have heard her if she’d left through the downstairs. That leaves an open bathroom window that’s never been opened before as the only way out. Yet, that snow down there is as pure as my 17-year-old daugh… Never mind. Bad allegory.”

“Analogy? What’s that? A third wife? You now have three wives, John?”

“You’ve got a bit of a smart mouth on you, John. You trying to start trouble here, maybe change the subject from how your wife disappeared?”

“Don’t talk about my daughter, wise guy. You leave my kid outta this or I’ll run you in so fast all that snow out there will melt.  Ahhh… That what you want, John? Maybe we’ll find a body down there, huh?  Get us off the property so we won’t find any incriminating evidence?  Think you’re a smart guy, huh, outwit the cops? You got any pigs, John?”

“Maybe you tried to dispose of her body, you know. To the pigs.”

“Wait a minute. I remember you. Weren’t you involved in that bus incident a few winters ago.? Yeah, yeah. I remember now. You and your ex-wife….. Martha, yeah, Martha. So, whatever became of Martha, anyway, John?”

“Detective, Martha is a fictional character. Fictional. She doesn’t exist in real life. Get it?”

“Don’t get wise with me, John. I’m just trying to get the facts. Nothing but the facts.”

Right about then is when John made a mad run for the bathroom window and launched himself out in a perfect swan dive.