The Nice Day for a Drive Journals, Ch. 3, Hurricane Gulch

(Yes, you've read these introductory paragraphs before, but in a different context.  Read on.)

Late Friday afternoon, nearing 5:30, and I’m on the phone with the Alaska State Police dispatcher, taking notes about a man who died after falling from Hurricane Gulch bridge on the Alaska railroad, a fall of almost 300 feet.  I’m a reporter for KFQD radio station, busy getting local news written and wrapped up for the 6 o’clock newscast.

Then, breaking news changes everything.

The day was Good Friday, March 27, 1964, at 5:36 in the afternoon, and the largest earthquake ever recorded in North America shook the bejesus out of us for five and a half minutes, reaching a magnitude of 9.2.   Today it ranks second to a 1960 earthquake of 9.5 magnitude in Chile in a list of worst earthquakes recorded in the world. 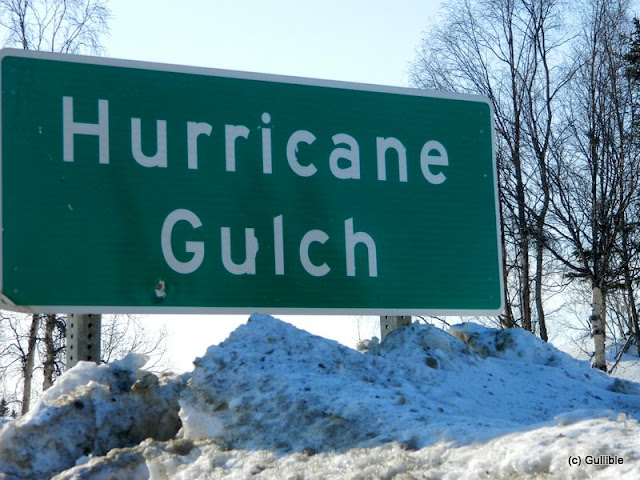 I think about that day and that unfortunate man who fell to his death every time I cross steel arch Hurricane Gulch highway bridge on the Parks Highway.   At 558 long, it’s half the length of the bridge over the Susitna River South near Talkeetna, but it’s a jaw-dropping 254 feet above Hurricane Creek below.  There are 40 bridges to cross on the highway between Anchorage and Fairbanks, and this is the most spectacular by far.


The highway trestle, from which the man fell, is almost 300 feet above the lowest point.

Hurricane Gulch sneaks up on the unwary driver who isn’t expecting a massive slice in the land as he passes the Talkeetna mountain range on the east.   Most likely the driver’s attention is ahead and to the left, searching for glances of Mount Denali.

For those in the know, however, there are large parking lots on each end of the bridge for those who must try to photograph the bridge and the steepness of the Gulch.   It’s almost an impossible task to get both the bridge and creek below in the view at the same time.