Birds of Different Feathers, with Good Deeds Mixed In

I started Wednesday off in fine style by consciously making a mistake.  Instead of my staying-at-home clothes, I donned leaving-the-house clothes.  That initiated a full-blown  red-tinted orange-eyed fury in the feathered changeling that lives in my house. 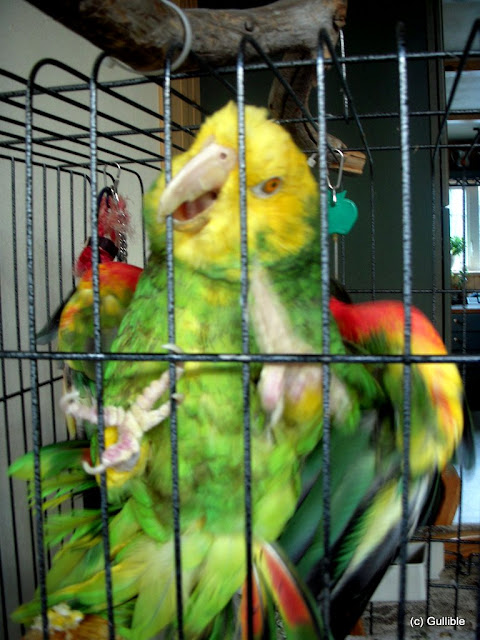 Stupid mistake.  I know better.  Nonetheless, even after changing back to a staying-at-home tee shirt, Pablo rewarded me with a punctured finger that required a Band-Aid when I tried to get him out of his cage for his trip to the vet.   The blood the vet required was supposed to come from Pablo, not me.

After leaving Pablo at the vet’s clinic for things I didn’t want to think about (i.e., sedation and a needle to the jugular vein), I was a very anxious mother hen, stomach clenched and all.

So, needing something to do that would distract my imagination and worst fears, I drove out of Anchorage to Potter Marsh where I stopped to photograph the snow geese that are taking a breather there before heading farther north, and then drove another mile south to Potter Station. 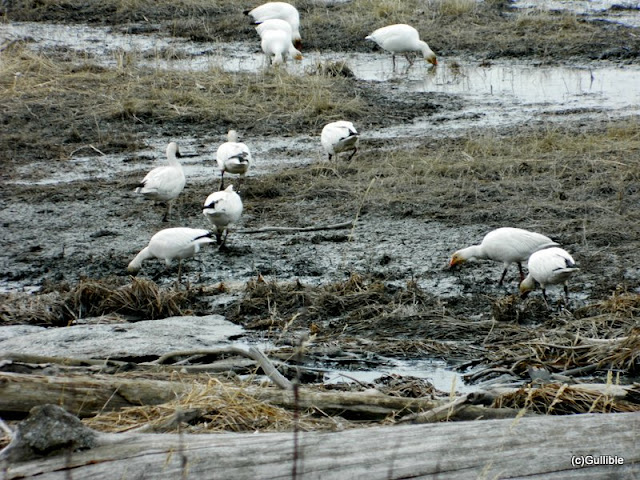 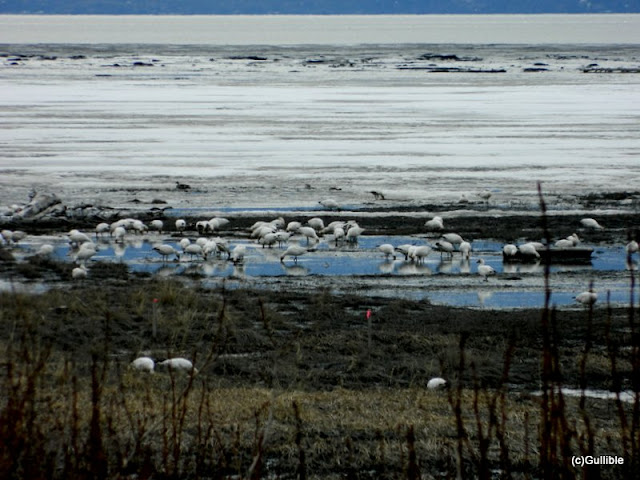 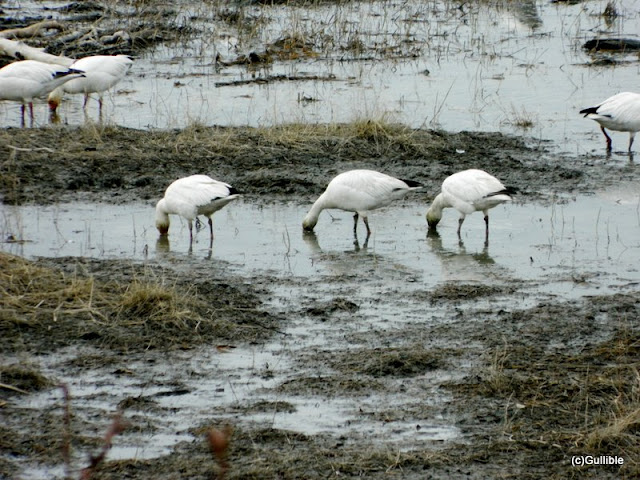 This former railroad section house is now the headquarters for the Alaska State Parks in this area.  There’s a small park with railroad-related displays, including an old engine with a 9-foot rotary snowblower.  There’s also a parking lot, which was my destination, because I’d stopped here on the way into town to use the facilities.


I  asked the rangers if they would mind if I picked up the litter in the parking lot.  "Mind?" a lady replied,  "Do you need a bag?"  I cleaned up four bags of winter-accumulated litter and as I was tying shut the last bag, the vet called to say Pablo was ready to go home, so I went to retrieve my still-living-thank-goodness bird.

By the time we got as far south as Potter Marsh, Pablo was in desperate need of a nap, so I pulled into the parking lot again.

While he napped, I finished picking up litter from the little park and went in the “employee’s only” back door entrance to the old station house, where I handed the ranger a driver’s license I’d found, and told him there was another bag of litter—the fifth.  They’d already cleaned up the first four. 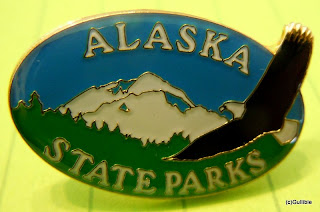 I was rewarded with an Alaska State Parks pin and a tour of the old station house.   We talked things railroad for a while (my dad retired from the railroad after 30 years), and Pablo and I were on our way home.   We got two miles down the road and had to stop again.

Wandering across the two-lane busy highway was a Greater White-Fronted Goose.   It was obviously injured, its right wing dragging across the asphalt.  I pulled over and with the help of a couple people, captured the goose.  I put it in the back of the truck, closed the door on the truck cap, and headed back to Anchorage.   Ironically, the goose choose to sit on a few empty yellow litter bags. 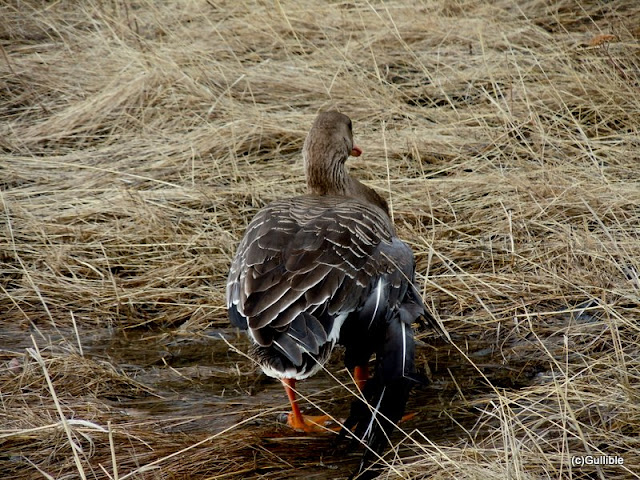 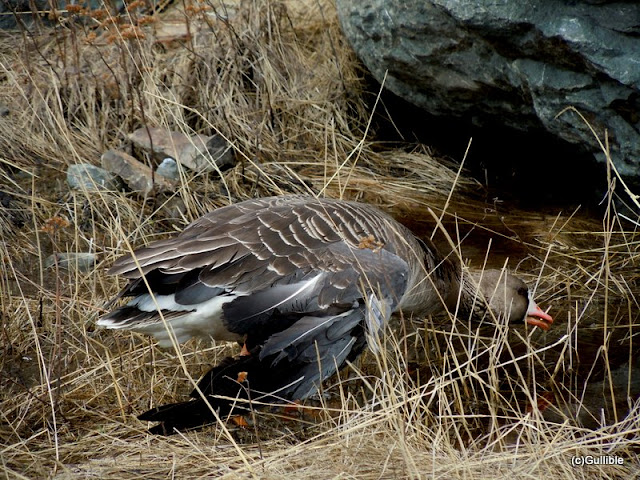 There’s an avian rescue organization in Anchorage called the Bird Learning and Treatment Center—Bird TLC for short.  They took the goose to the back of the facility where a veterinarian examined it immediately.


And THEN Pablo and I went home, but not before I carefully washed my hands at Bird TLC.  A few minutes later I reached up to pet Pablo and he recoiled.   I’m guessing he either smelled the goose on my hands, or he didn’t like the scented hand wash I’d used. 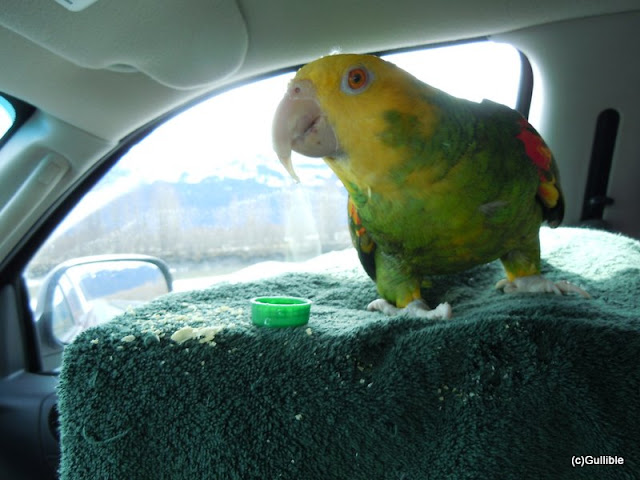 Now, I have to go launder that jacket and green blanket AND remove smelly goose souvenirs from the back of my truck.

Next day addendum:  So far Pablo's blood test results are fine.  There are more to come, such as liver function.  The sexing test had to go to California and will take a week.   Pablo is doing well today, though he doesn't want me out of his sight.

Not good news for the goose.  The wing was so badly damaged it would require amputation.  Bird TLC tried to find a place that could take it afterwards, like the Alaska Zoo which takes many injured and orphaned animals, but in the end it had to be euthanized.   I think that was a better result than getting run over on the highway, or dying a miserably slow and painful death from infection.
Posted by Gullible at 3:38 PM