There's a part of me that thinks perhaps we go on existing in a place even after we've left it.—Colum Mccann, Let the Great World Spin.

We  are to depart Chobe Safari Lodge this morning for Victoria Falls in Zimbabwe.   While I’m looking forward to the adventures at the falls, I am sorry to leave Chobe and its animals and birds.

“I really like this place,” I say to Brian.

“If you like this lodge,” he says, “you’ll really like our lodge in Kruger park.  It’s like living in a tree house."  That ameliorates my sadness.  Somewhat.

I have bug bites on my arms for the first time, despite the supplied repellant.  There are tsetse flies in this area, as well as mosquitoes, but I haven't seen either.  The little buggers have bitten me and departed unseen and unsmacked.

Then we board our coach and Dumi, the driver, takes us east towards Zimbabwe.   Our local guide from Zimbabwe is Brighton, and he will be with us until we leave the Victoria Falls area.
First, though, we must exit Botswana passport control, again, a very modest building.  There are waist-high posts with lights on top outlining the sidewalk, but three of them are knocked over.   A line of trucks and buses wait for clearance in another lane.

We are cleared one by one in a very hot office with two agents attempting to handle the swarm and drive through the gate.
Next up is Zimbabwe passport control and on we go into a country now in shambles politically but which at one time had the highest literacy rate in the world.  The country accepts the U.S. dollar, the South African rand, the Botswana pula, and the Euro, but the dollar is the most frequently used.


We drive a paved, two-lane highway with no lane markers while Brighton talks about his country and the surrounding vegetation.   At one point, the road is painted with lane markers, but white as the center line and yellow as the fog line.

There is no poaching in Zimbabwe national parks for one reason:  the rangers have orders to shoot to kill.   With no way for the decease’s spirit to go home, it is doomed to wander forever.   However, this doesn't stop the rangers from poaching, as it's been reported.


In a brief time, we reach a small village with numerous tourism-related businesses.  A right turn takes us through a landscaped approach to the famous Victoria Falls hotel, a beautiful century-old treasure from the country’s colonial past. 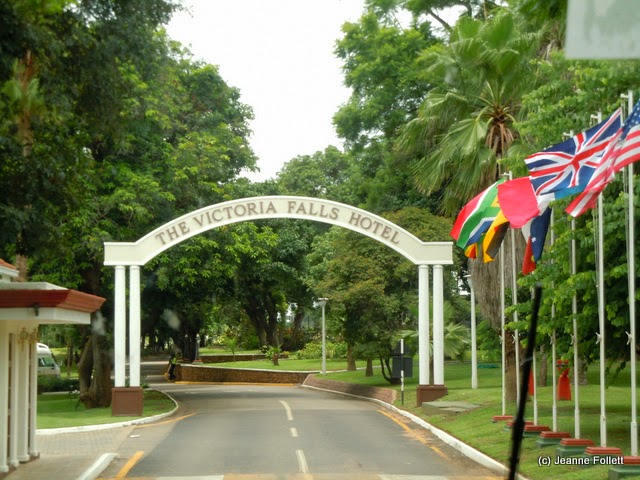 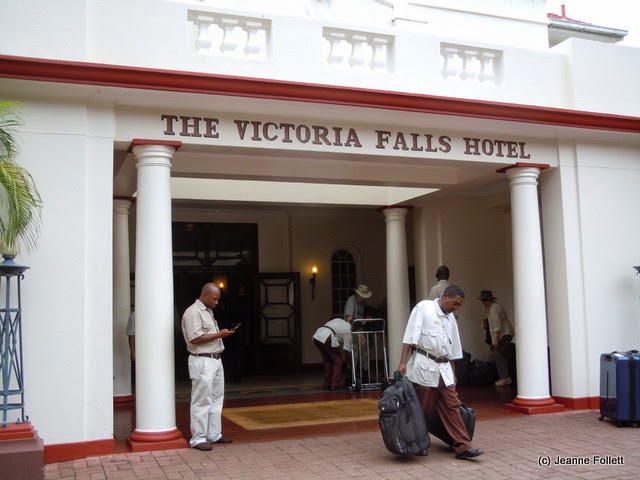 This Edwardian-style hotel was built in 1904 and has 161 rooms.   Rulers and royalty and famous celebrities from around the world have stayed in this five star hotel.   Its corridors are lined with photographs depicting its history.
We are greeted at the entrance by Duli, the head porter, with a tray of cold, mint-scented washcloths for freshening up after our “weary” journey.  Duli “inherited” his job from his father.   The story is that one day the father decided he would retire and sent Duli in his place.  The hotel accepted him without interview or other formalities, and he’s been there ever since, his coat festooned with emblems and pins from around the world, and I have plans to send him another from Alaska. 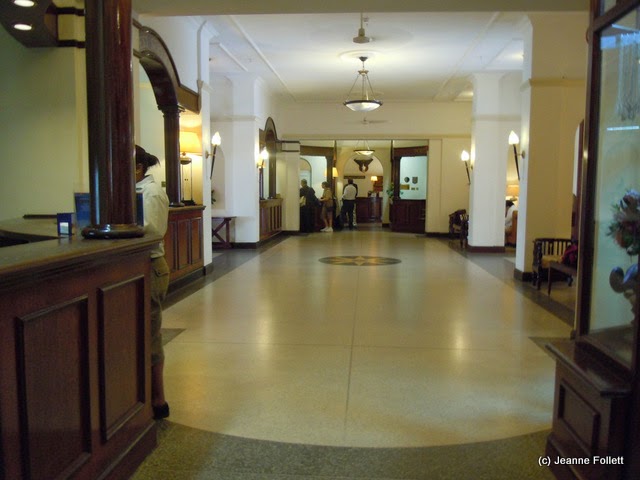 Then we are escorted to one of the fabulous meeting rooms where we are treated with the traditional orange juice.  Brian gives us our itinerary for the next day’s helicopter rides and walk along the cliff opposite the falls.  I pick up my room key from a table, and I’m off to explore. 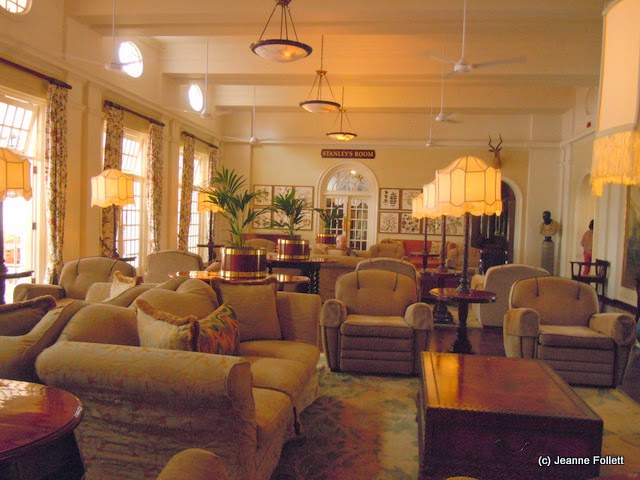 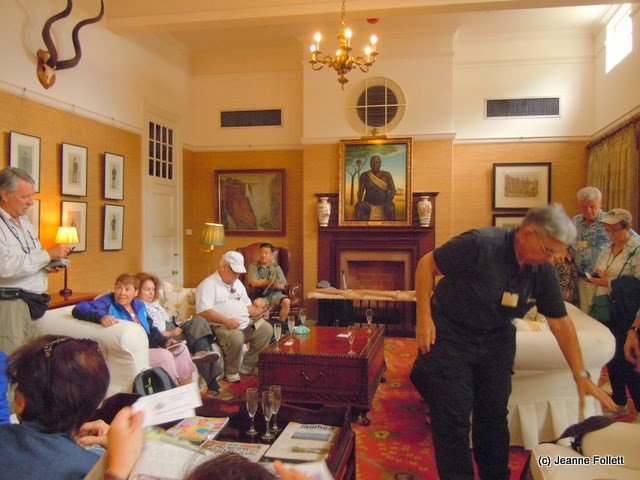 Our rooms are not quite ready, so most of us decide to have lunch on the adjoining terrace where hamburgers are $18.00.   Yikes.  I order something else and it is only $16.00.   Shortly, Brian announces our rooms are ready.

My room is down this corridor. 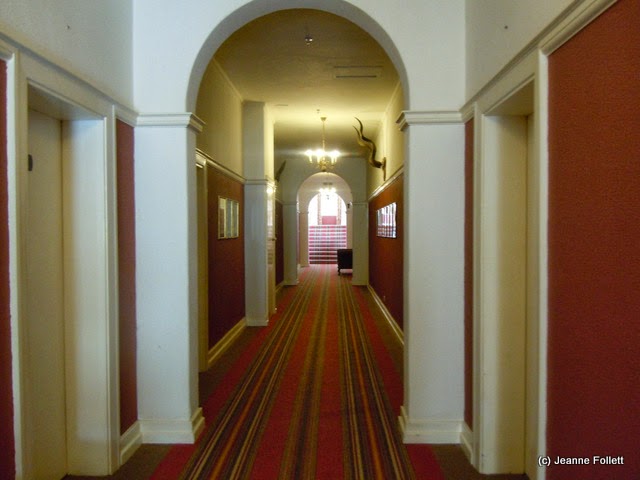 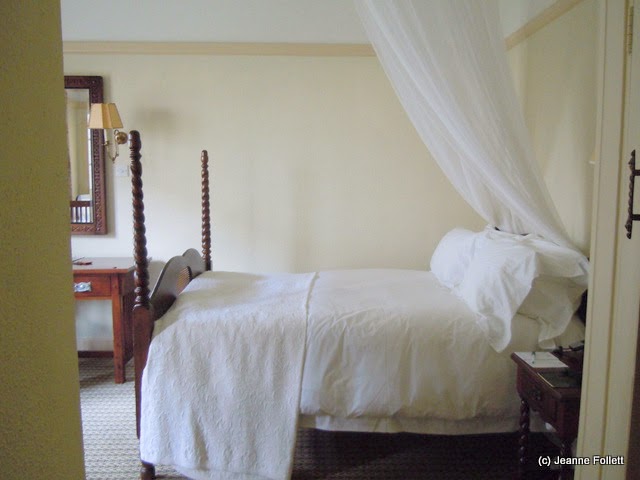 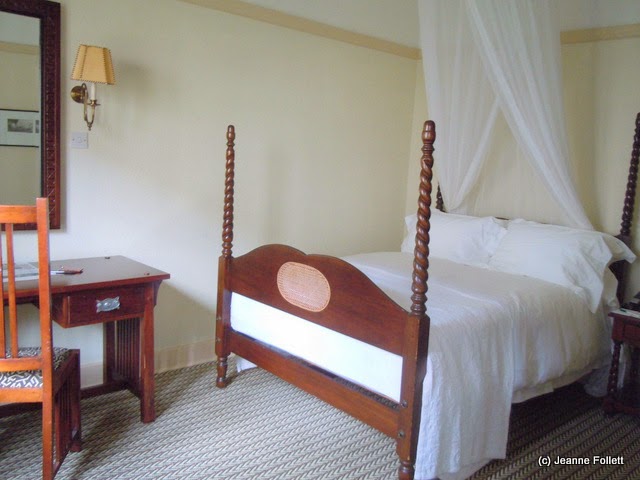 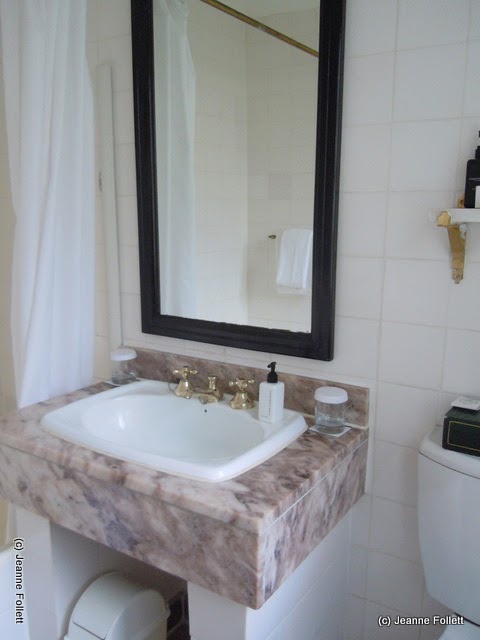 My luggage arrives and I unpack as much as I need for the few days we'll be in this area.   I have time to roam the grounds before we meet for a walk along the falls. 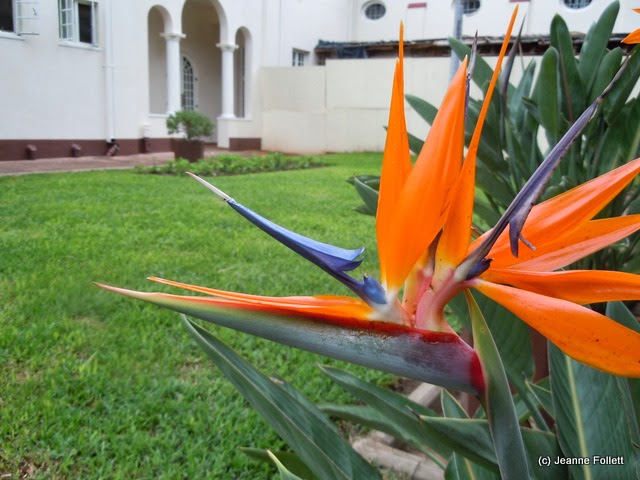 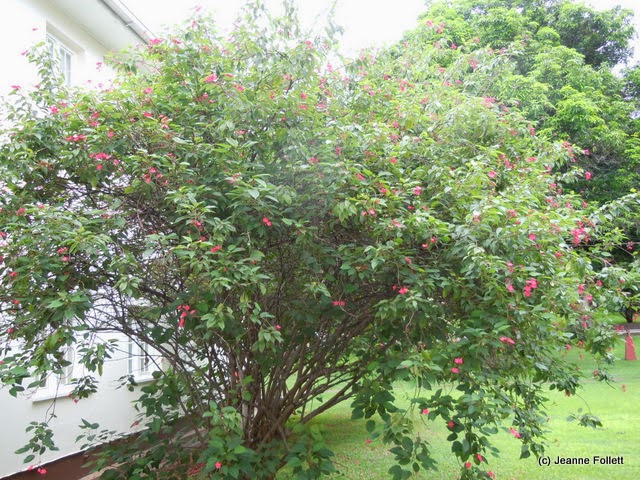 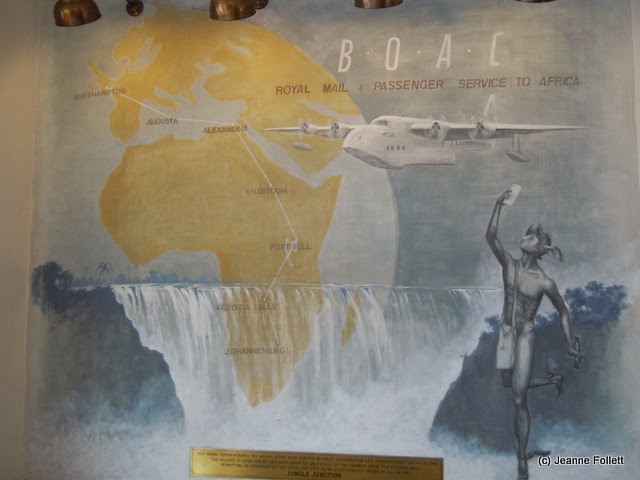 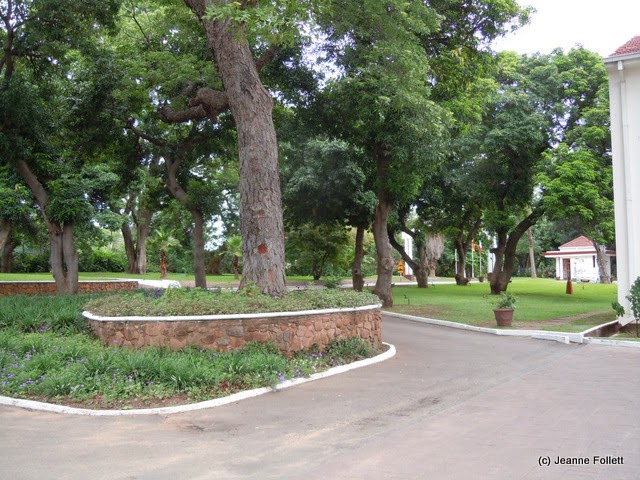 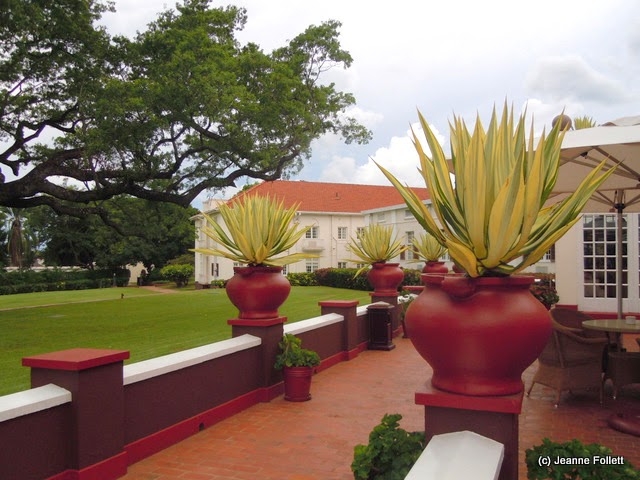 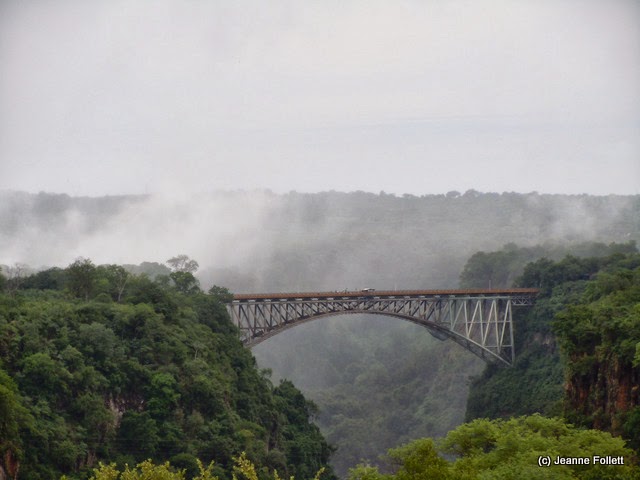 A road/railroad from Cape Town to Cairo was the dream of Cecil Rhodes.  The bridge across the falls’ gorge was part of the plan.   It is 650 feet long and spans 513 feet of gorge, 420 feet above the mean low water mark.  The bridge connects Zimbabwe with Zambia.   Today, in addition to traffic,  it is a popular bungee jumping site. 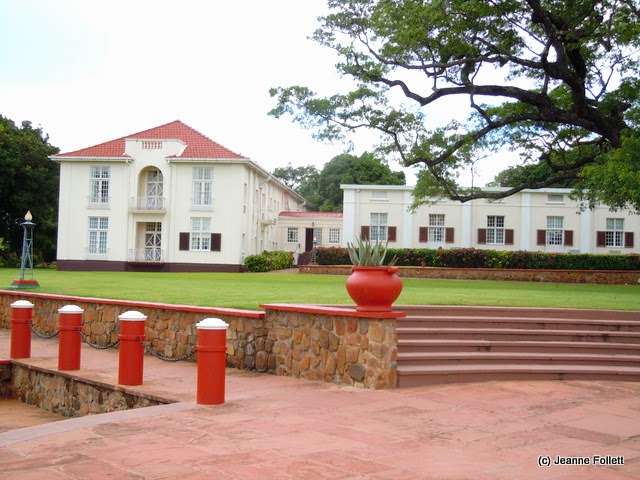 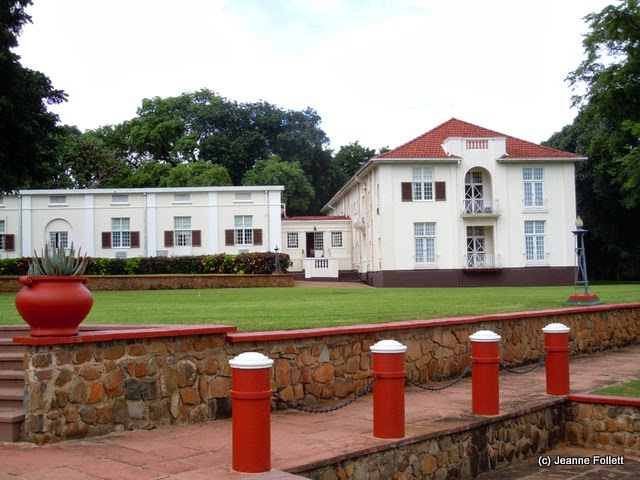 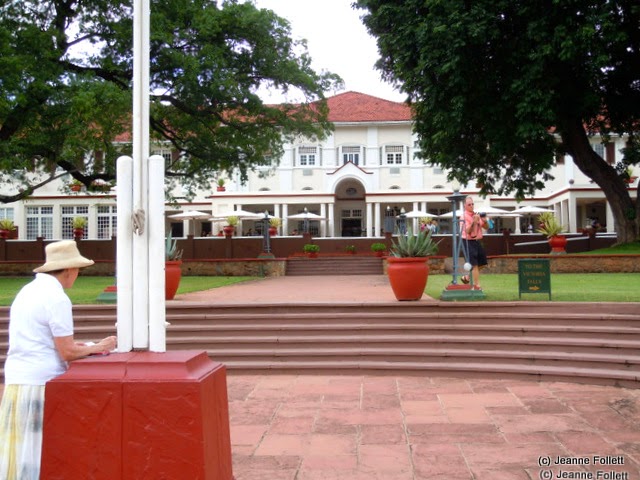 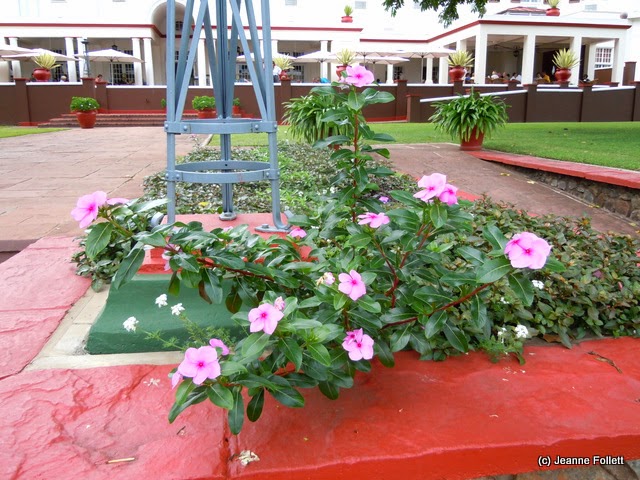 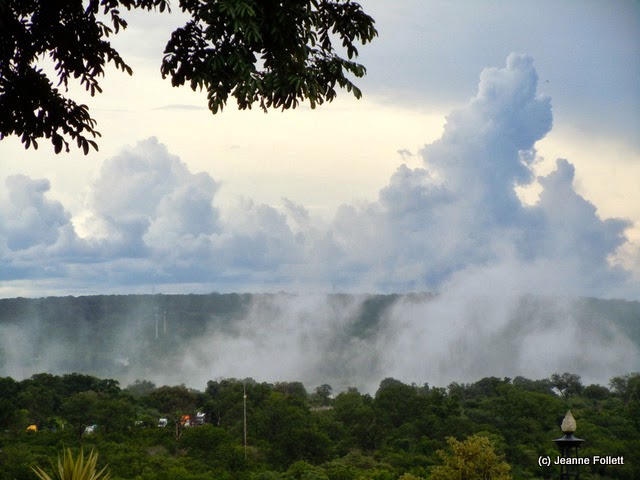 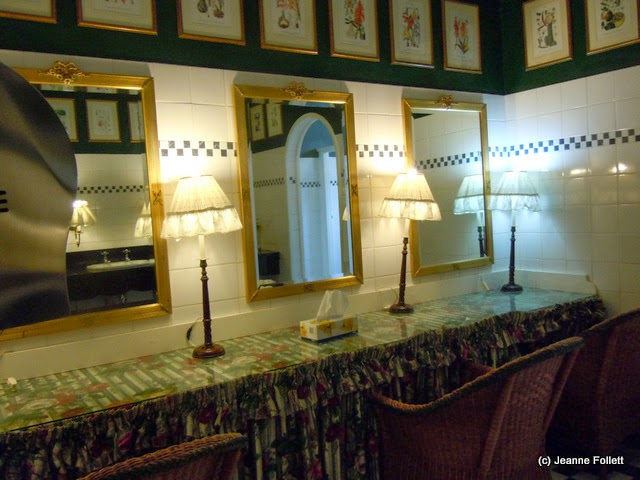 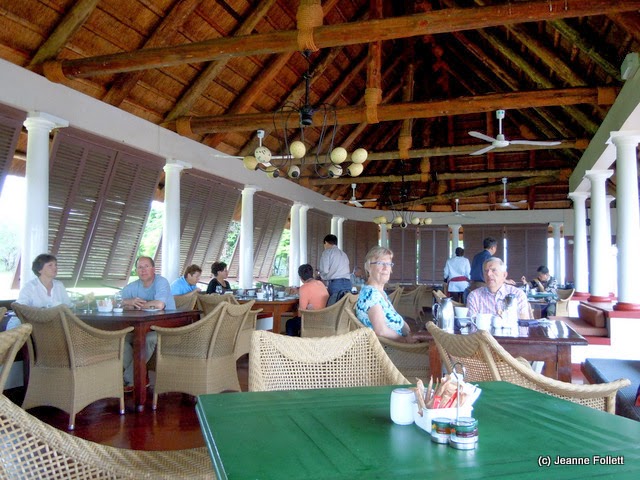 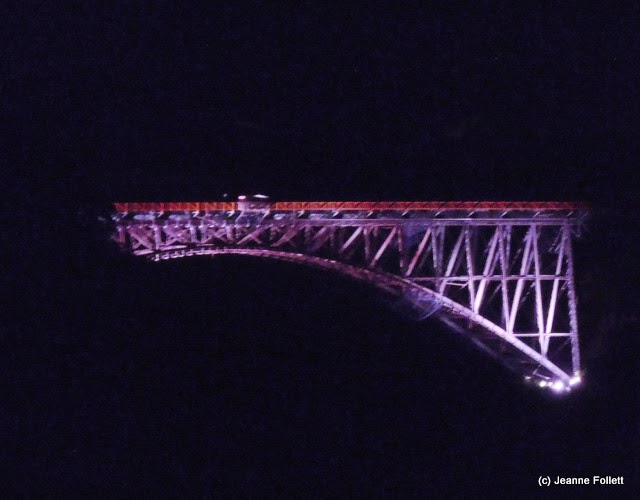 And now, you'll have to excuse me.   I'm going for a walk along Victoria Falls, which has a place on one of the Seven Natural Wonders of the World lists.